The Best Queer Bars in Denver 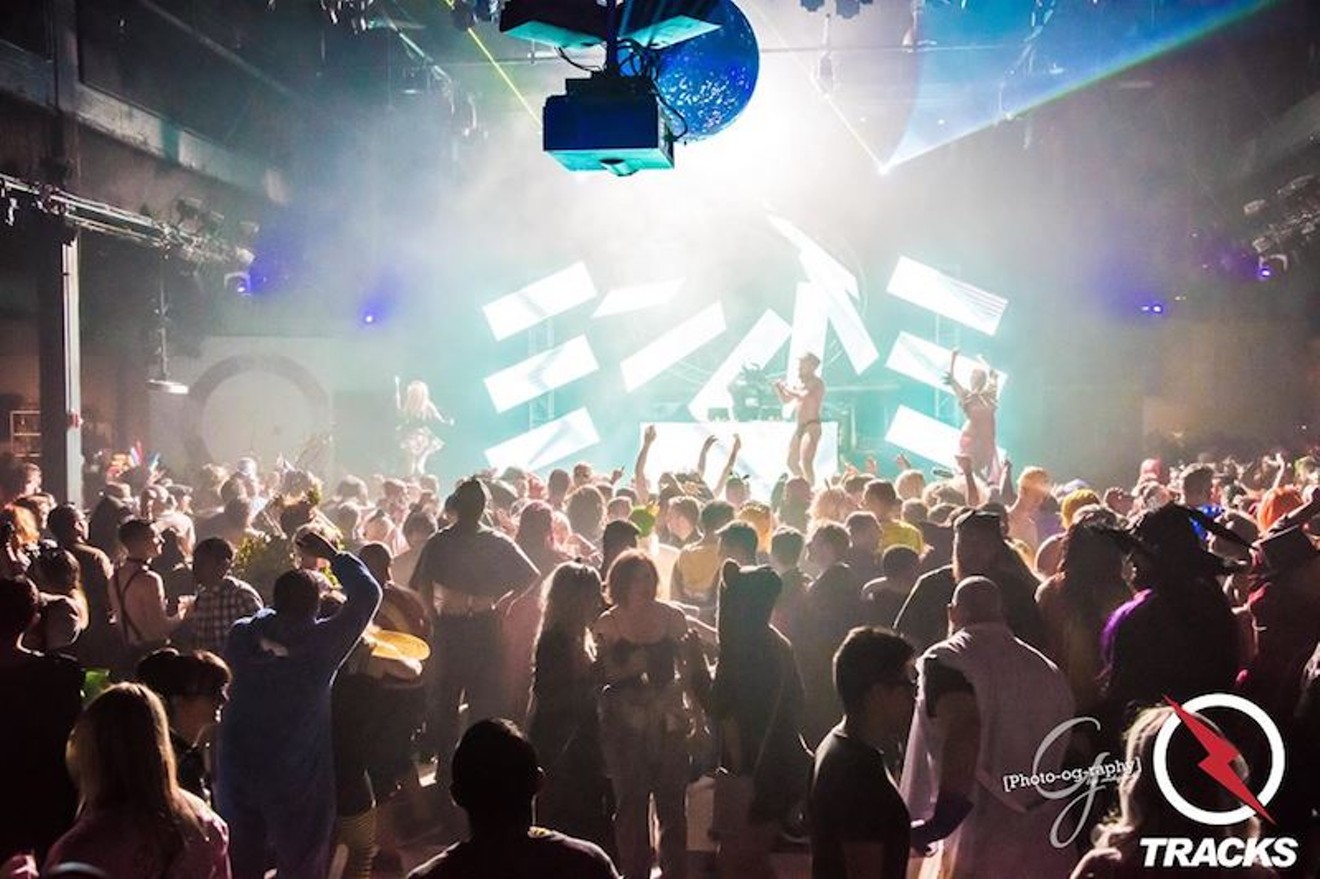 Tracks is one big gay party. G Photography
Denver's LGBTQ+ community has come a long way in the last fifty years. The extent of queer nightlife in Colorado used to be little more than a few underground nightclubs for gay men, but now the scene has expanded to include options for just about everyone. So, which establishment is right for you? You don't want to accidentally take Grandma to an underground fetish bar or end up in a food coma when you're dressed for a night out dancing.

Each venue occupies its own little niche in queer entertainment, so here's a guide to some of the best, and what they do best. Whether you're in the mood for a late-night boogie session, an after-work happy hour or Sunday brunch, these LGBTQ bars in Denver are here to provide whatever you're craving.

Tracks
3500 Walnut Street
If you're wondering what the difference is between a queer bar and a queer club, go to Tracks. Open Thursday through Saturday from 8 p.m. to 2 a.m., Tracks is not exactly a place where you go to grab a casual beer with friends. However, it's been a staple of queer nightlife in Denver since opening in 1980, and is still your best bet for big events with national or international headliners. From circuit parties to balls, theme nights, watch parties and monthly roller discos, Tracks has the space to offer it all (this venue is huge). With multiple rooms — each with its own theme, DJ and dance floor — it's almost like a three-ring circus, which is great for folks who are easily bored, or for friend groups with diverse music tastes. Tracks is also one of the few queer bars that hosts 18+ nights, allowing LGBTQ+ folks under 21 a space to find community. Once a lone nightlife spot in the industrial part of RiNo, Tracks is now within walking distance of many other Denver hot spots, making it the perfect final destination on a RiNo bar crawl. X Bar has also served as the set for several of local queen turned international drag superstar Yvie Oddly's music videos.
Brian Degenfelder
X Bar
629 East Colfax Avenue
Established in 2010, X Bar is a tried-and-true favorite, welcoming all members of the LGBTQ+ community. It's fun, it's affordable, and it's got a little something for everyone. X Bar is a favorite spot for drag shows (of all different styles) in Denver. The venue interior is smaller and more intimate than a club like Tracks, but with a large, newly renovated outdoor patio that can accommodate a crowd. Which is good, because with different events and drink specials every night of the week, there is almost always a crowd. Open 3 p.m. to 2 a.m. Monday through Friday (with an extended happy hour from 3 to 8 p.m.), and noon to 2 a.m. on weekends, X Bar is the rare queer bar that caters to both day drinkers and night owls. Its brunch shows (with $15 bottomless mimosas available) are a rollicking good time, but be warned: Gay bars do not water down their mimosas. For the late-night crowd, X Bar also has a new after-hours sister spot, Glow Lounge, located next door at 631 East Colfax Avenue. It's open from 10 p.m. till 2 a.m., and sometimes even until 4 a.m. for special "Afterglow" events (though last call for alcohol is still 1:30 am). 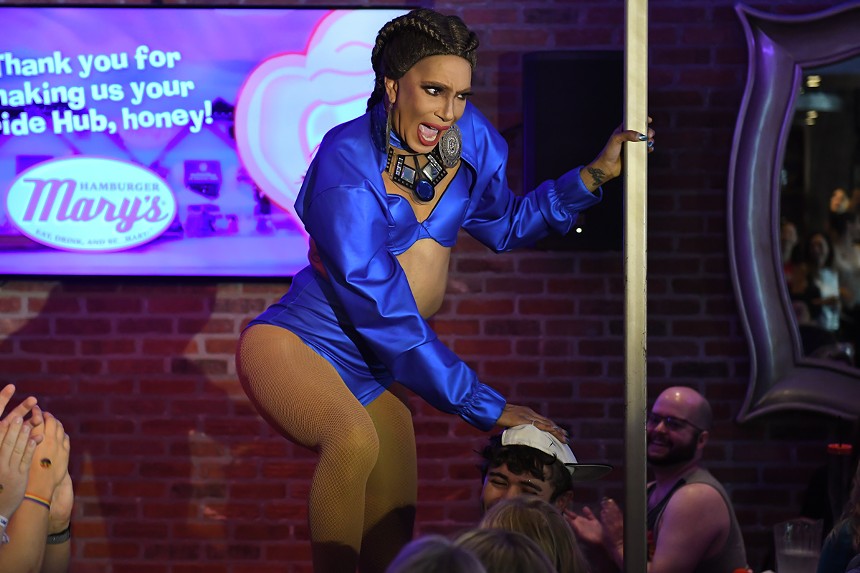 Drag queen Felony Misdemeanor turns the party at Hamburger Mary's.
Miles Chrisinger
Hamburger Mary's
1336 East 17th Avenue
Hamburger Mary's is for the queers who love to eat (insert crude bottom joke here). Unlike many bars that were forced to start offering food during the pandemic, Mary's is a food-first type of place. A national chain serving comfort-food staples like cheese curds, mac and cheese and, of course, mouthwatering burgers, Hamburger Mary's is much more low-key than the other places on this list. But it still has plenty of strong signature cocktails and live entertainment, making it an ideal spot for people who want to have a gay old time outside of a nightclub environment. With several drag brunches every weekend, weekly bingo nights and "Dinner With a Side of Drag," Mary's is a great place to enjoy drag shows while staying comfortably seated and well fed. Notably, several local drag performers have said that it's their favorite place to perform, because patrons are usually more focused on the show than the party aspect. This is where you should take your straight friends, your bachelorette party or your mom. Check Hamburger Mary's Facebook page for show schedules and current hours. 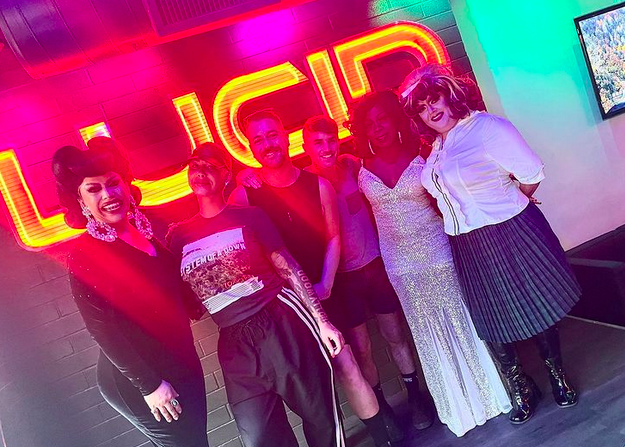 Lucid
600 East Colfax Avenue
Lucid is the hip new kid on the block. Opened in August 2020 and located on East Colfax in the heart of Denver's Gayborhood, it's advertised as "Denver's Disco Lounge." It lives up to the lounge feel, with huddled sections of couches situated between high-top tables for two, while disco balls and neon lights lend the small space a bright yet cozy atmosphere. Lucid is also located on the second floor of Kyu Ramen, making it another option for queer foodies who want something different from bar food fare. Plus, its kitchen is open until 1 a.m. Friday and Saturday, in case you need some late-night dumplings to soak up the fun signature cocktails, made by some of the nicest bartenders in Denver. Lucid quickly established itself with a strong schedule of weekly events, including open-mic nights, karaoke, open-stage nights and speed dating, many of which benefit local queer charitable organizations. It's a great venue for up-and-coming performers of all kinds to sharpen their stage presence, which means it's also the place to be if you like to stay on top of new performers entering the scene. Lucid is open Monday and Tuesday from 5 p.m. to midnight, and Wednesday through Sunday from 5 p.m. to 2 a.m. Follow its Facebook page for event schedules and announcements.

Trade
475 Santa Fe Drive
Trade is kind of a throwback to when the gay nightlife scene was mostly underground, before it became widely commercialized to draw in a straight audience. (Translation: This is not the spot for your sorority sister's bachelorette party.) It's an LGBTQ+ fetish and kink bar, and acts as a gathering spot for the kink and leather communities. Trade's Facebook page explains, "While we are a gay men's bar, we are welcoming to all in the queer and kink community." Located in the Santa Fe Art District, Trade prides itself as being a place where queer sexuality can be embraced and explored. Underground house music is the mainstay here, but Juicebox nights, featuring queer hip-hop and R&B spun by JuicyFruit, are not to be missed. Other regular events include karaoke, beer busts, movie nights, underwear nights and showtune sing-alongs.

#VYBE
1027 Broadway
#VYBE is owned by the Mirandas, a family that has been in the Colorado hospitality industry since 1979. It's nestled between several other bars and restaurants on Broadway, making it an ideal spot for an after-work drink or pre-gaming before a dinner reservation. Plus, it has a daily happy hour from 10 a.m. til 8 p.m., which makes its already reasonably priced drinks even cheaper. #VYBE offers its own versions of all the usual gay bar entertainment, like drag bingo with a Latin twist (Lotería), Karaoke with Sexy Jesus, and frequent drag shows from residents Kat Danger, Lala Queen and Krystal Towers. Since opening in 2017, #VYBE has also established itself as the place to watch Broncos and Avs games, and often throws viewing parties featuring drink specials, touchdown shots, giveaways and even appearances by Broncos cheerleaders. #VYBE recently reopened its patio just in time for summer, so you can now down its signature infused pickle shots while soaking up the sun.

Triangle
2036 Broadway
Today's Triangle is a resurrection of a legendary Denver gay bar of the same name, located in the same historic triangular building as the original. Triangle aims to create an elevated queer-bar experience, with a large menu of fancy signature cocktails (and several delicious mocktails), farm-fresh food options, and a rotating roster of talented DJs. Its themed Sunday drag brunches snagged our Best Drag Brunch award in 2022's Best of Denver for the extensive food menu, mimosa carafes, coffee cocktails and, of course, the fabulous cast of drag performers. In addition to brunch, Triangle also hosts tacos and tequila nights on Fridays, and has all-you-can-eat wings on Thursdays. As a bonus, Triangle is dedicated to being more sustainable and environmentally friendly, and is partially powered by wind power. Tight End
1501 East Colfax Avenue
Tight End, owned by Steven Alix (co-owner of the Squire Lounge) and Sudy Kudva, is Denver's first (and only, officially) gay sports bar. Watch the game on one of nine televisions, sip a boozy beverage on the sound-equipped patio, and enjoy a safe space to take in all sports. The drink list has all your sports-bar favorites, such as beer — lots of beer — shots of liquor and simple mixed drinks. On quiet nights when there aren't any big games, Tight End also hosts karaoke and drag bingo, which to some are the greatest sports of all.

Have a favorite queer spot that didn't make the list? Let us know, email [email protected].
KEEP WESTWORD FREE... Since we started Westword, it has been defined as the free, independent voice of Denver, and we'd like to keep it that way. With local media under siege, it's more important than ever for us to rally support behind funding our local journalism. You can help by participating in our "I Support" program, allowing us to keep offering readers access to our incisive coverage of local news, food and culture with no paywalls.
Make a one-time donation today for as little as $1.