Big Apple Bodega/Instagram
While the chopped cheese sandwich is a staple in New York City bodegas, one Denver food truck has become the first chopped cheese-based franchise in the country to hit the market.

A cross between a burger and a sloppy joe, a traditional chopped cheese is composed of a simple combination of ground beef and cheese, chopped together on the griddle and loaded onto a soft bun, usually with lettuce, tomato and ketchup. While it used to be tough to find in the Denver area, its popularity is growing, with chopped cheeses popping up on menus all over the Mile High.

While most spots only offer one take on the sandwich, the menu at the Big Apple Bodega food truck is comprised entirely of different takes on the chopped cheese, from a classic called the Sinatra to the Little Italy with mozzarella and marinara to the Astoria with feta and tzatziki.

The truck launched in March; now owner Brian Murphy has high hopes that more Big Apple Bodega trucks and brick-and-mortar locations will soon be popping up in Denver and beyond. "Working in the corporate world for over 25 years, when I was putting this business together, I realized I put it together in a way that I can easily teach and replicate," explains Murphy, whose background includes positions at national chains like Shake Shack, Starbucks and Potbelly. "It kind of, from all my years of training, just worked out that way," he adds. 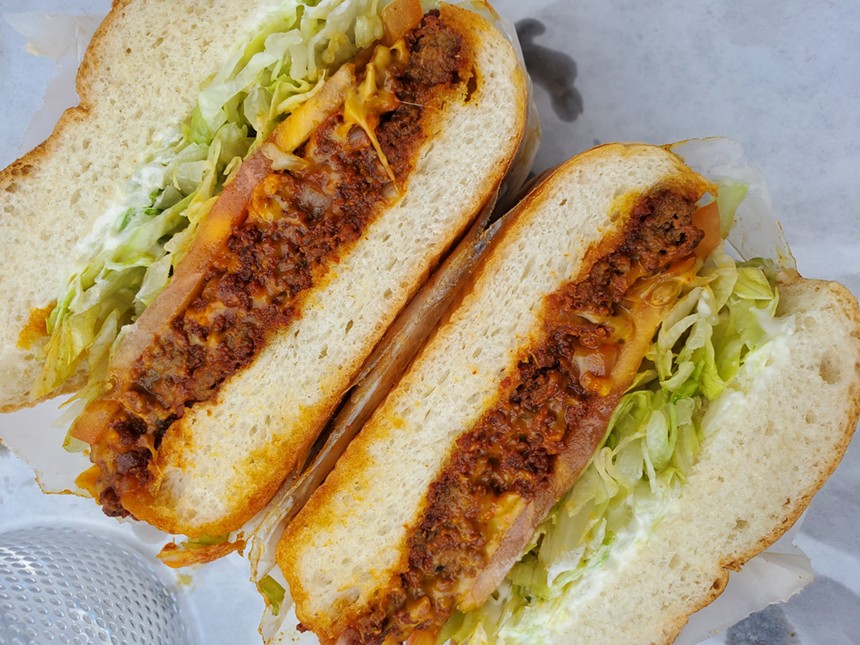 The Sinatra is a classic take on the chopped cheese from Big Apple Bodega.
Molly Martin
In June, Miami-based company Franchise Creator reached out to Murphy about possibly franchising his concept, and the deal officially launched on September 26. "It could be like a giant light switch, or it could be slow," Murphy says of expanding his business. As food truck season winds down, he plans to focus on the franchising opportunities while also keeping busy with catering and private events.

While he considered adding a second truck himself, the logistics of operating two mobile kitchens can be riddled with headaches. Instead, Murphy hopes to find other people who are passionate about chopped cheese sandwiches whom he can bring on the truck to train before they open their own outposts of the business.

This also gives Big Apple Bodega the chance to expand in other markets. "I gave [Franchise Creator] a list of ten to fifteen cities," Murphy says, with a focus on places that have a lot of New York transplants, like Miami and Fort Lauderdale, as well as food truck-friendly cities like Portland.

Another kind of truck in Denver or surrounding suburbs is a possibility as well. But right now, Murphy is excited to keep serving up chopped cheese sandwiches and satiating people looking for a taste of home. "When New Yorkers come to the truck, it's so gratifying," he says. "I really love being out there and doing this."

For more information on Big Apple Bodega's franchise opportunities, visit bigapplebodega.co/franchise.
KEEP WESTWORD FREE... Since we started Westword, it has been defined as the free, independent voice of Denver, and we'd like to keep it that way. With local media under siege, it's more important than ever for us to rally support behind funding our local journalism. You can help by participating in our "I Support" program, allowing us to keep offering readers access to our incisive coverage of local news, food and culture with no paywalls.
Make a one-time donation today for as little as $1.