The Ten Biggest Food Stories of 2022 Casa Bonita will reopen in May, with a new paint job outside and in. Molly Martin
After almost two years of forced closures, reduced capacity and changing rules, restaurants and bars enjoyed twelve full months of operations without pandemic-related regulations in 2022. But it's been far from business as usual in the hospitality industry over the past year. While challenges such as staffing shortages and supply-chain issues continue to put pressure on the industry, Denver's dining scene just keeps growing.

Amid all the nonstop openings and new trends emerging, some hot topics bubbled over. Here are the ten biggest local food stories of 2022: 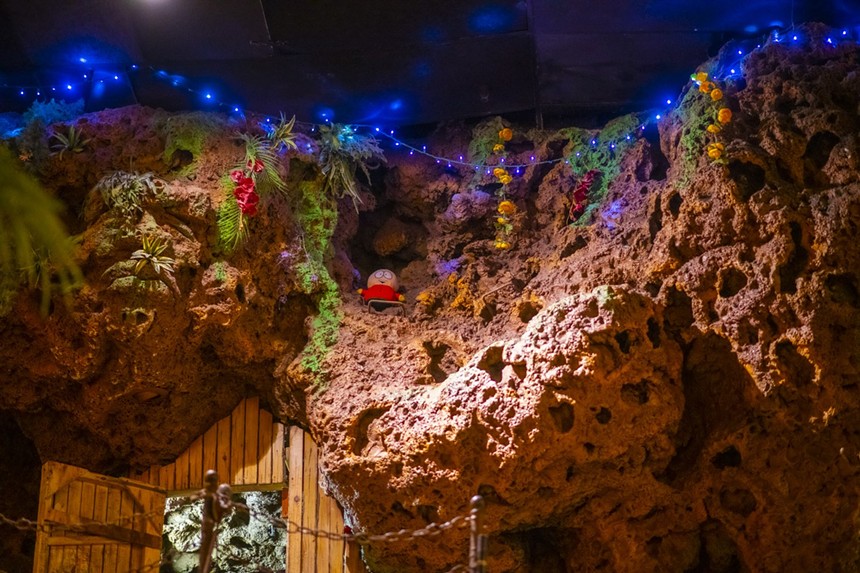 Casa Bonita's reopening didn't happen in 2022, but it was still a buzzy topic.
Evan Semón
The Pink Palace
Last year, the debate over Casa Bonita's future ended in the most Colorado way possible: South Park creators Trey Parker and Matt Stone announced that they were the new owners of this iconic spot. But that end was just the beginning of the saga. This year, every tidbit of information about the Pink Palace was gobbled up as those hungry for nostalgia waited for news about when it might reopen. On December 22, we got that news: May 2023. Parker and Stone are pouring a fortune into updating the space and getting everything up to code. In the meantime, many of its staff members have remained on the payroll while working at various nonprofits around town. Five months from now, we'll finally get to see more than Casa Bonita's new Pepto-pink paint job. Until then, this is sure to remain a buzzy topic. 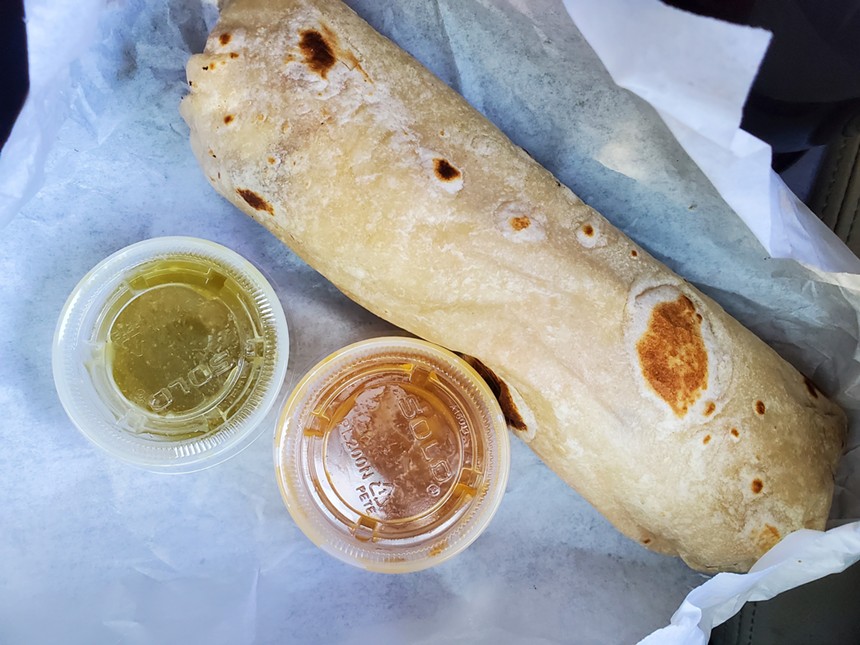 Even burritos are not immune to inflation.
Molly Martin
Rising Prices
The challenges of operating a restaurant during a pandemic (and covering the losses that resulted) paired with inflation added up to higher prices at your favorite restaurants this year. It's harder and harder to find lunch deals for under $15, and $20+ for a burger and fries is pretty typical these days. Yes, dining out is more expensive than ever, leading many to wonder what the effect will be if people decide to tighten their budgets in the new year. The Colorado Restaurant Association recently offered up the Burrito Effect, a graphic that breaks down the ways that inflation is cutting into restaurant profitability using a national fast-food chain as a case study: In order to make its 2019 margin today, the restaurant would have to raise its price from $13.50 to $22.65 for a burrito. That's not a price tag anyone's happy to bite into, but sticker shock may just be the new norm when you're dining out. 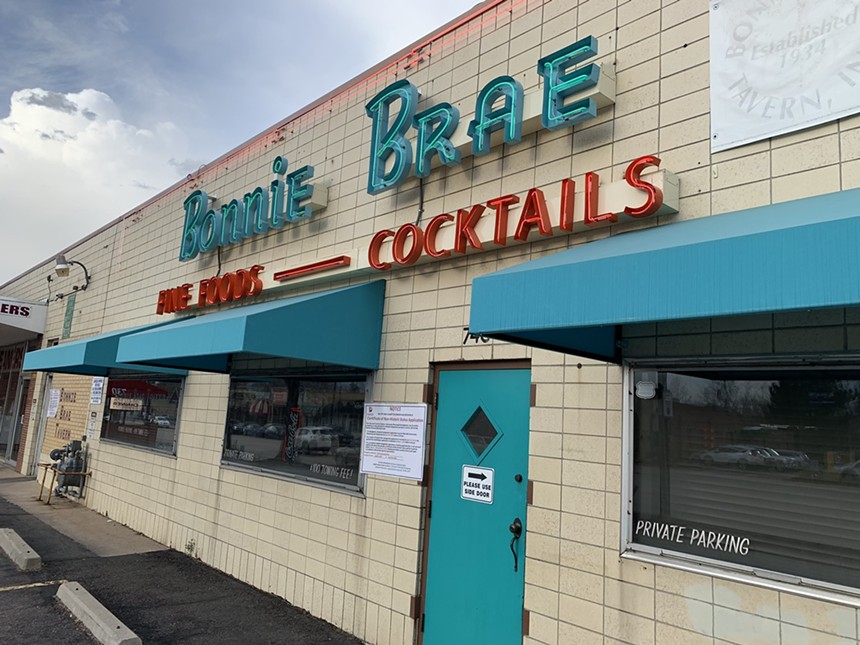 The Bonnie Brae Tavern site will become a three-story apartment complex.
Patricia Calhoun
Classics Closing
A lot of old favorites shuttered when COVID came along, and there was a rash of new losses this year as rising prices and staffing shortages took their toll. The closures started in January, when, without warning, the Breakfast King went dark after 47 years in business. Then Denver lost the Irish Snug, Nick's Cafe, Annie's Cafe, Bonnie Brae Tavern, the Saucy Noodle and more. "I don't even recognize this city anymore," is a sentiment that was echoed over and over as the announcements came, and it's true: Denver is changing rapidly. But there are some beacons of hope, too, like Tom's Diner. Instead of being torn down, it morphed into Tom's Starlight, a cocktail lounge and eatery that boasts a swanky outdoor space that we can't wait to drink in this summer. 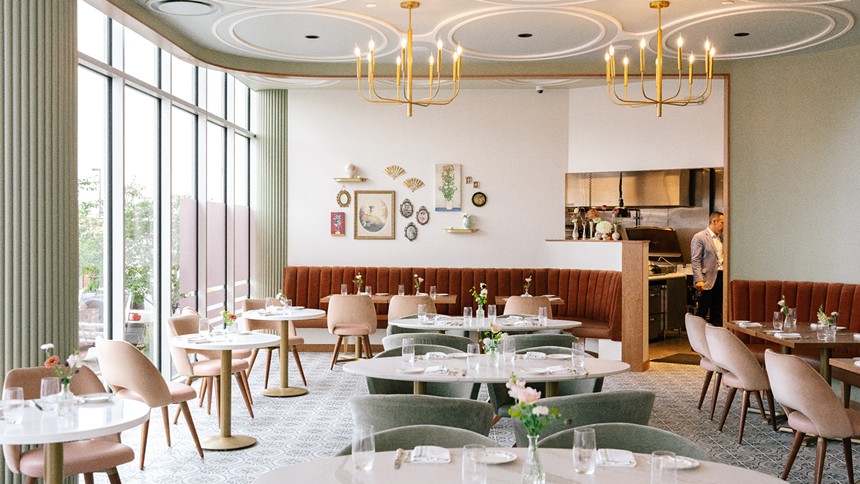 Noisette was one of many new fine dining restaurants that opened this year.
Courtesy Noisette
High-End Additions
At a time when there's worry of a recession and established restaurants are struggling, 2022 still saw a number of new fine-dining options join the scene. From smaller eateries like Noisette, a romantic spot serving French fare, to celebrity chef Ludo Lefebreve's Chez Maggy and seafood lovers' paradise Water Grill, more high-end spots with high price points have moved into the Mile High. Although Denver is still a place where dress codes are pretty much nonexistent and many people would rather sit in a 24/7 Mexican drive-thru line than book a reservation for an eatery serving $33 fish and chips, these high-end spots are drawing plenty of hungry locals and visitors alike. 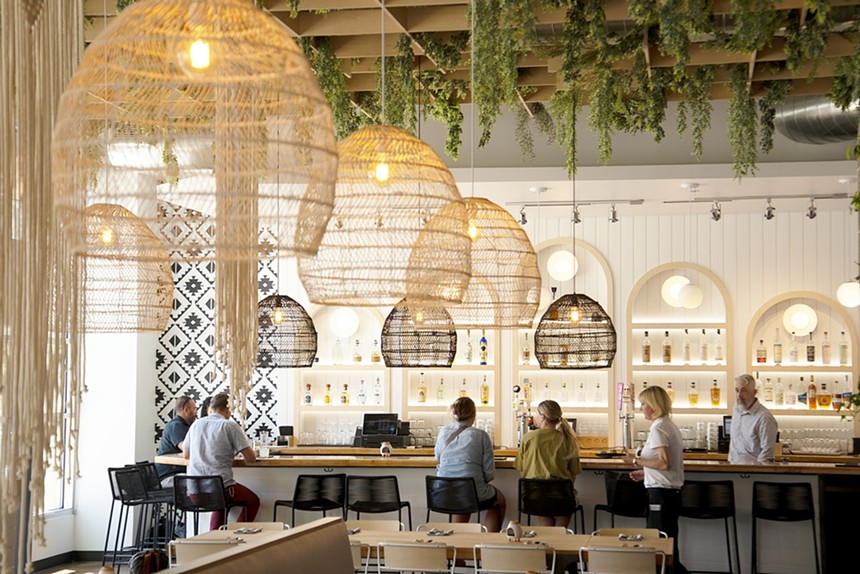 Mama Lolita's is an elegantly designed addition to Broomfield.
Tom Hellauer
Dining in the ’Burbs
One often-heard complaint about the metro dining scene is that the only options in the suburbs are chains. But if this year is any indication, that's changing, and quickly. With affordable real estate hard to come by in Denver proper, many independently owned ventures are opting for locations outside the city. Mama Lolita's is now serving elevated Mexican in Broomfield, and Stone Cellar Bistro in Arvada landed on our list of the ten best restaurants to open in 2022, as did Carrera's Tacos in Greenwood Village. When La Rola Colombian decided to look for permanent digs, it opted for Littleton; next year, Wheat Ridge will be the site of two of the most anticipated openings of 2023: Rich Spirits, a bagel shop offshoot of the popular Bakery Four, and GetRight's, a bakery and plant shop combo that began as a pandemic startup. El Pollo Loco is located at 4698 Peoria Street.
El Pollo Loco
New Chains Moving Into Colorado
As much as we love locally owned eateries, the dining scene does see a lot of chain action...and reaction. The proliferation of out-of-state concepts coming to Colorado was one of the biggest food stories of 2021, and that trend continued this year. Big fast-food names like Whataburger and El Pollo Loco both returned to the state after long absences. Smaller chains made their debut as well, including the charcuterie-focused Graze Craze in Centennial; Crisp & Green, which has three Denver area locations open and nearly twenty more in the works; and New York-born Van Leeuwen ice cream, which now has scoop shops in Denver and Boulder. Expect even more regional chains in 2023, like PrimoHoagies and Chicken Salad Chick. 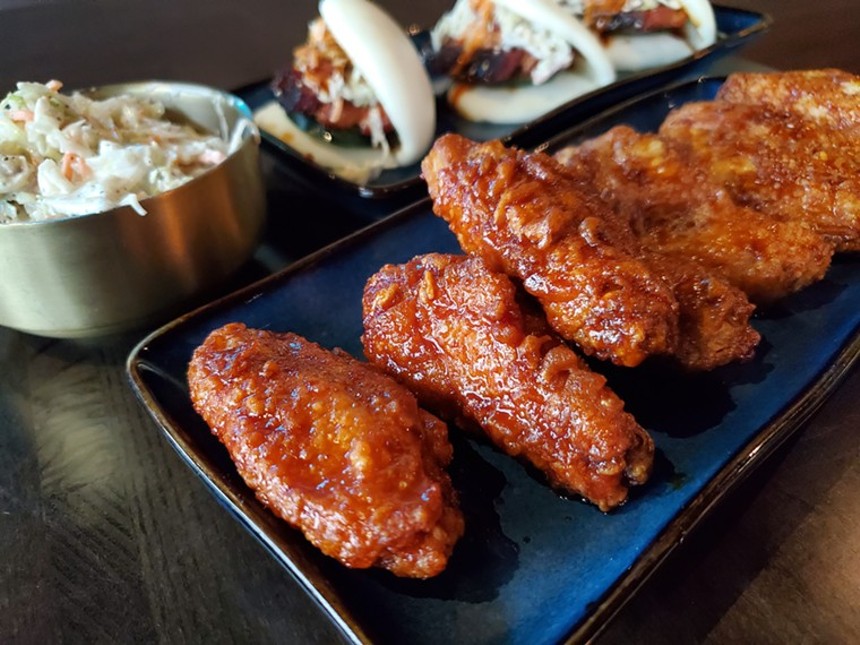 Bonchon specializes in the new kind of KFC.
Molly Martin
KFC
Last year marked the peak of Nashville hot chicken's popularity in Denver, but in 2022, a new chicken trend ruled the roost. "KFC stands for 'Korean fried chicken' now," Alex Lee told Westword earlier this year. Lee owns two of the bb.q Chicken locations that have debuted in the state so far, just one of the new options serving this crunchy, saucy, often spicy take on fried chicken. Many, like bb.q Chicken and Bonchon, are chains with locations worldwide, while others, like Mono Mono, are locally grown. Each of them does KFC a little differently, and one of the most delicious parts of the past year was eating our way through as many as possible. On track to trend next year: bubble tea and Korean hot dogs. 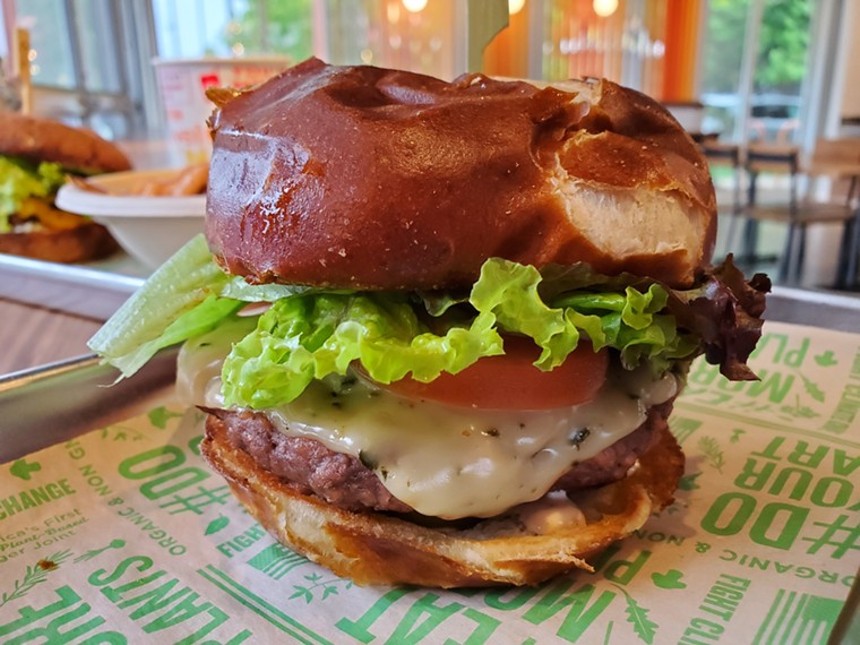 The Ghost Pepper Popper Burger at Next Level.
Molly Martin
Vegan Food for All
The rise in plant-based food options is nothing new, but in 2022, vegan eating went mainstream. In January, two new bars with vegan-focused food menus opened: the Crypt, which has a punk-rock edge and draws a lot of industry regulars; and Fellow Traveler, an eatery on South Broadway in Englewood that doesn't lean on its vegan status. These spots are simply cool places to hang out that just happen to be (mostly) meat-free. The team behind Somebody People opened a new addition as well, the all-vegan Everyday Pizza. Near the University of Denver, Next Level Burger brought its vegan take on fast food to the neighborhood, while Birdcall, which has a location next door, put the meat-free alternative Meati on its menu. It's easier than ever to eat vegan in the Mile High these days, whether you opt for a meat-free diet all the time or simply want to incorporate more plant-based foods into your meals. 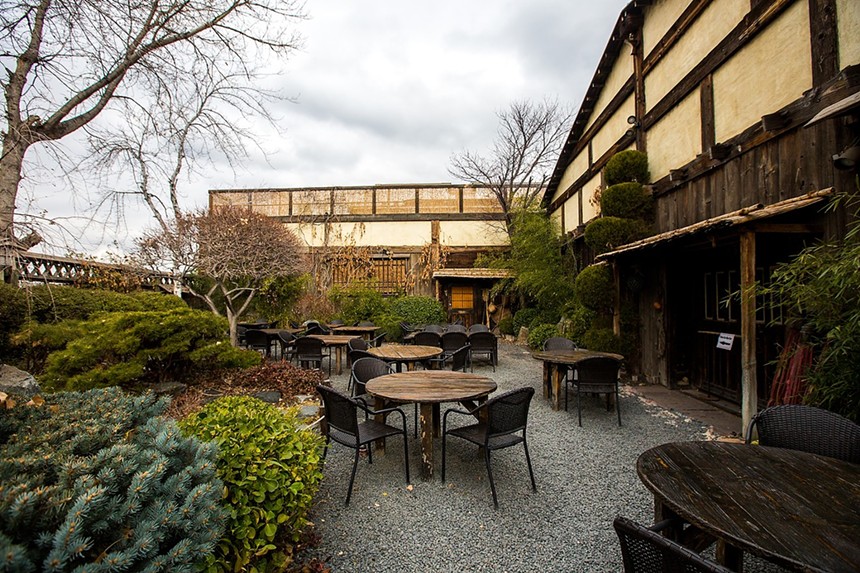 Domo went viral on TikTok, then closed for good.
Danielle Lirette
The TikTok Effect
There's no way around it: Social media is an essential tool for many restaurants, and influencers are a powerful part of promoting places to eat and drink. This year, it was TikTok that had the biggest impact. Short videos showing cheese pulls and colorful cocktails from accounts like @denverfoodscene and @thedenverfoodie garner hundreds of thousands of views, instantly driving a rush of new customers to the places being featured. For Domo, the beloved Japanese eatery that had a viral moment of its own in 2021, the unexpected attention ultimately led to its demise. But in most cases, harnessing the power of TikTok became a way to boost business at a time when the market is saturated with choices and finding the budget for marketing is nearly impossible. There's a major downside to this, though: The buzz rarely lasts, as followers just move on to the next place once another piece of content catches on.
KEEP WESTWORD FREE... Since we started Westword, it has been defined as the free, independent voice of Denver, and we'd like to keep it that way. With local media under siege, it's more important than ever for us to rally support behind funding our local journalism. You can help by participating in our "I Support" program, allowing us to keep offering readers access to our incisive coverage of local news, food and culture with no paywalls.
Make a one-time donation today for as little as $1.