Chef Biju Thomas (center) in the kitchen at Biju's Little Curry Shop at Broadway Market. Danielle Lirette
Counting up everyone who has ever stood in line at Biju's Little Curry Shop in RiNo for a steaming bowl of vindaloo or braised beef topped with tangy cabbage, crunchy crumbles of pappadam and blazing-hot chutney would take some doing. The eatery founded by chef Biju Thomas in December 2014 at 1441 26th Street has been a favorite for fans of Indian cuisine for the past four and half years, earning our award for Best Indian Restaurant in 2018 and growing to new outposts in Berkeley and the Golden Triangle.

But the lease is ending at Biju's, and Thomas doesn't plan on renewing. The ever-busy entrepreneur (who has also rolled out jarred spices, grab-and-go foods and pop-up counters inside several Whole Foods Markets under the Biju's name) explained that the Biju's Curry Shop concept is evolving and the RiNo space — especially its minuscule kitchen and lack of a full bar — just doesn't fit the company's needs anymore.

Add to that continuing construction on and around the intersection of 26th and Walnut streets and a long-term vacancy next door (where Zephyr Brewing moved out in 2017), and it's easy to see why people seeking lunch or dinner head toward teeming Larimer Street instead of the relatively quiet block that Biju's calls home. 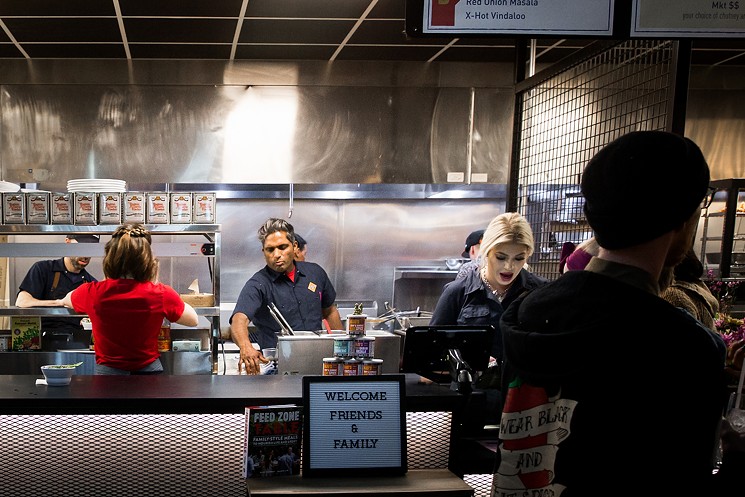 Chef Biju Thomas (center) in the kitchen at Biju's Little Curry Shop at Broadway Market.
Danielle Lirette
So, Thomas is winding down operations there, with a move this week to lunch-only hours from 11 a.m. to 3 p.m. Monday through Saturday. The chef says the restaurant will close for good by the end of October since the lease ends in November, depending on how soon the landlord finds a new tenant.

But your curry is safe, as long as you don't mind heading to the larger Biju's at 4279 Tennyson Street, or the walk-up counter inside Broadway Market, at 950 Broadway. Unfortunately, the anticipated expansion to Tributary Market in Golden didn't work out, primarily because hiring employees outside of central Denver turned out to be exceptionally difficult.

And Thomas promises more good things to come at the Tennyson outpost, including weekend brunch and an expanded tap list. He also says he plans to take the menu a little more upscale. "I want to offer food the way I cook at home for friends," the chef notes, explaining that the Chipotle point-and-order style of service limits the kind of South Indian cuisine he can present. In the meantime, he's also working on expanding the Biju's concept out of state.

For now, you've got time to savor a bowl of South Indian goodness at the little curry shop at the heart of the Biju's empire.
KEEP WESTWORD FREE... Since we started Westword, it has been defined as the free, independent voice of Denver, and we'd like to keep it that way. With local media under siege, it's more important than ever for us to rally support behind funding our local journalism. You can help by participating in our "I Support" program, allowing us to keep offering readers access to our incisive coverage of local news, food and culture with no paywalls.
Make a one-time donation today for as little as $1.