The sounds and smells of sizzling meat draw hungry travelers looking for a cheap meal near train stations, hostels, airports and late-night bar stops to street vendors. The sight of a slowly rotating spit of glistening lamb or chicken seals the deal.

Thin-shaved meat and tangy sauces swaddled in a warm pita or a similar flatbread is salvation in sandwich form throughout the Mediterranean, but especially in Turkey, where the vertical rotisserie was invented by Iskender Efendi more than 150 years ago, resulting in a wave of döner kebab that has since spread throughout Europe and into the U.S.

We're familiar with döner's close cousin, gyros, from the Greek diners that line Colfax Avenue and dot other older neighborhoods around Denver, and even shawarma, a similar configuration differing mainly in the seasonings, served from spits in the city's Middle Eastern kitchens. But Turkish cuisine is all but impossible to find in the Mile High City. That is, unless you stop at Bosphorus, the tiny Turkish eatery that Melih Cingilli opened at 3493 South Downing Street in Englewood on August 8. 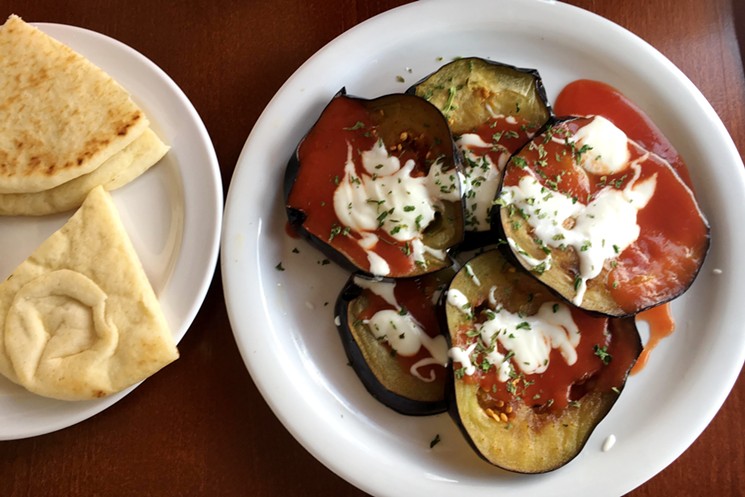 Grilled eggplant is served as an appetizer or in a veggie sandwich with falafel and stuffed grape leaves.
Mark Antonation
Built into a space that previously held a hair salon, Bosphorus serves döner as well as a selection of other Turkish sandwiches, soups, salads, appetizers and entrees from an open kitchen that provides a full view of two rotisseries, one loaded with aromatic chicken and the other holding a lamb-beef blend.

Cingilli has only called Denver home since 2015, but he's been in the U.S. since 1997, when he moved to Minnesota to attend college. He started cooking early, learning family dishes from his father and grandmother in Ankara and then helping run a small Turkish restaurant. He'd been out of the food-service business for some time, though, when he saw the vacant space on South Downing (right next door to Cochino Taco and close to Swedish Medical Center). Suddenly, he was inspired to open his own restaurant. 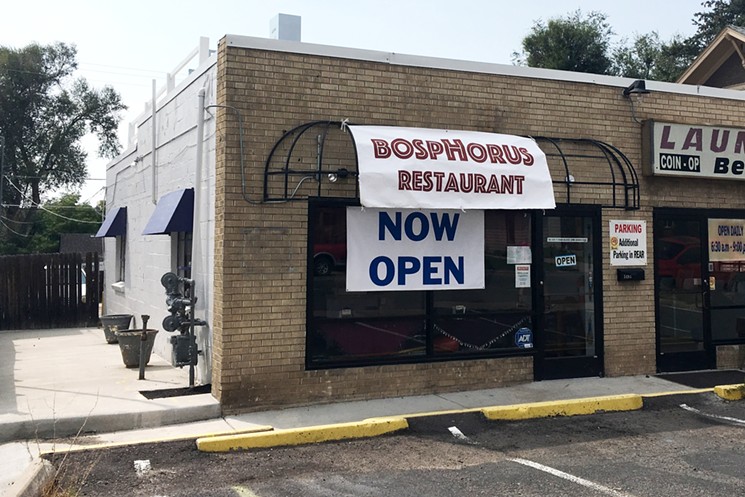 Bosphorus is now serving Turkish cuisine in Englewood.
Mark Antonation
Iskender Efendi did more than popularize vertical spit roasting; he lent his name to a dish, Iskender kebab, that's now one of Turkey's most popular food items and is served, among many other places, at the restaurant run by Efendi's descendants in Bursa. Cingilli offers Iskender kebab at Bosphorus; it's his favorite dish on the menu. The ingredients are familiar to fans of döner kebab sandwiches, but this is served as an entree, with shaved chicken or the lamb-beef mix topping fried pieces of pita. A generous drizzle of tomato sauce and yogurt make it fork-and-knife fare. Cingilli's tomato sauce is silky and mild, with a plummy sweetness and herbal notes that he says come from the addition of mint and basil.

That sauce also balances the bitterness of eggplant in an appetizer called patlican tavasi. This dish is often served as a stew similar to French ratatouille, but at Bosphorus it arrives as thick, velvety slices of fried eggplant sided with triangles of pita. Other appetizers familiar from Mediterranean cuisine include stuffed grape leaves, falafel, hummus and spinach börek, a puff-pastry pie that contains feta cheese, not unlike Greek spanakopita.

The spit-roasted meats show up in various formats, from sandwiches and Iskender kebab to the Sultan Platter, which can be ordered for two to four guests and comes with a variety of meats and grilled vegetables. Köfte — called Turkish meatballs here — also make an appearance, as do the cubed and marinated beef or chicken that many of us think of when we hear the word "kebab." On the whole, the menu will not be unfamiliar to anyone who frequents Middle Eastern, Greek or other Mediterranean restaurants, with perhaps the red-lentil soup standing out as unique. Still, the particulars of cooking style and seasoning make Bosphorus distinctly Turkish. 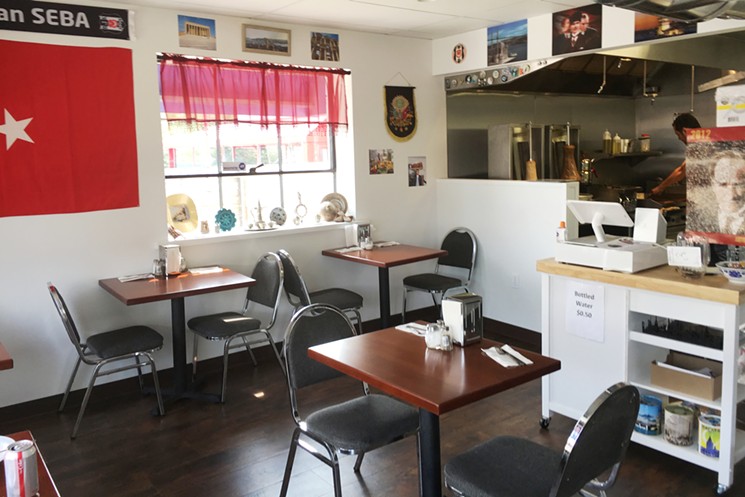 Bosphorus has seating for twelve guests inside its tiny dining room.
Mark Antonation
Lunch or dinner during peak hours is not a rushed affair, since the kitchen is small and the owner does much of the cooking and table service himself, with the help of one other cook. The decor in the dining room comprises Turkish flags, art and ornaments, as well as Turkish football club memorabilia. It's cozy and inviting, with only six two-top tables, so lingering over strong black Turkish tea or coffee and a slice of baklava is not out of the question.

Cingilli moved to Denver to start a family with his wife, Lauren, who is from Colorado. They chose Bosphorus, the narrow waterway straddled by Istanbul that divides Europe and Asia, as the name of the restaurant to symbolize the connection between the two continents, the ties between East and West. That connection now extends to Denver, bringing a taste of Turkey to the suburb of Englewood.

Bosphorus is open daily from 11 a.m. to 9 p.m. for lunch and dinner. Neighbors and medical professionals will welcome the takeout-friendly menu; call 303-942-1267 for more details or to place an order.
KEEP WESTWORD FREE... Since we started Westword, it has been defined as the free, independent voice of Denver, and we'd like to keep it that way. With local media under siege, it's more important than ever for us to rally support behind funding our local journalism. You can help by participating in our "I Support" program, allowing us to keep offering readers access to our incisive coverage of local news, food and culture with no paywalls.
Make a one-time donation today for as little as $1.