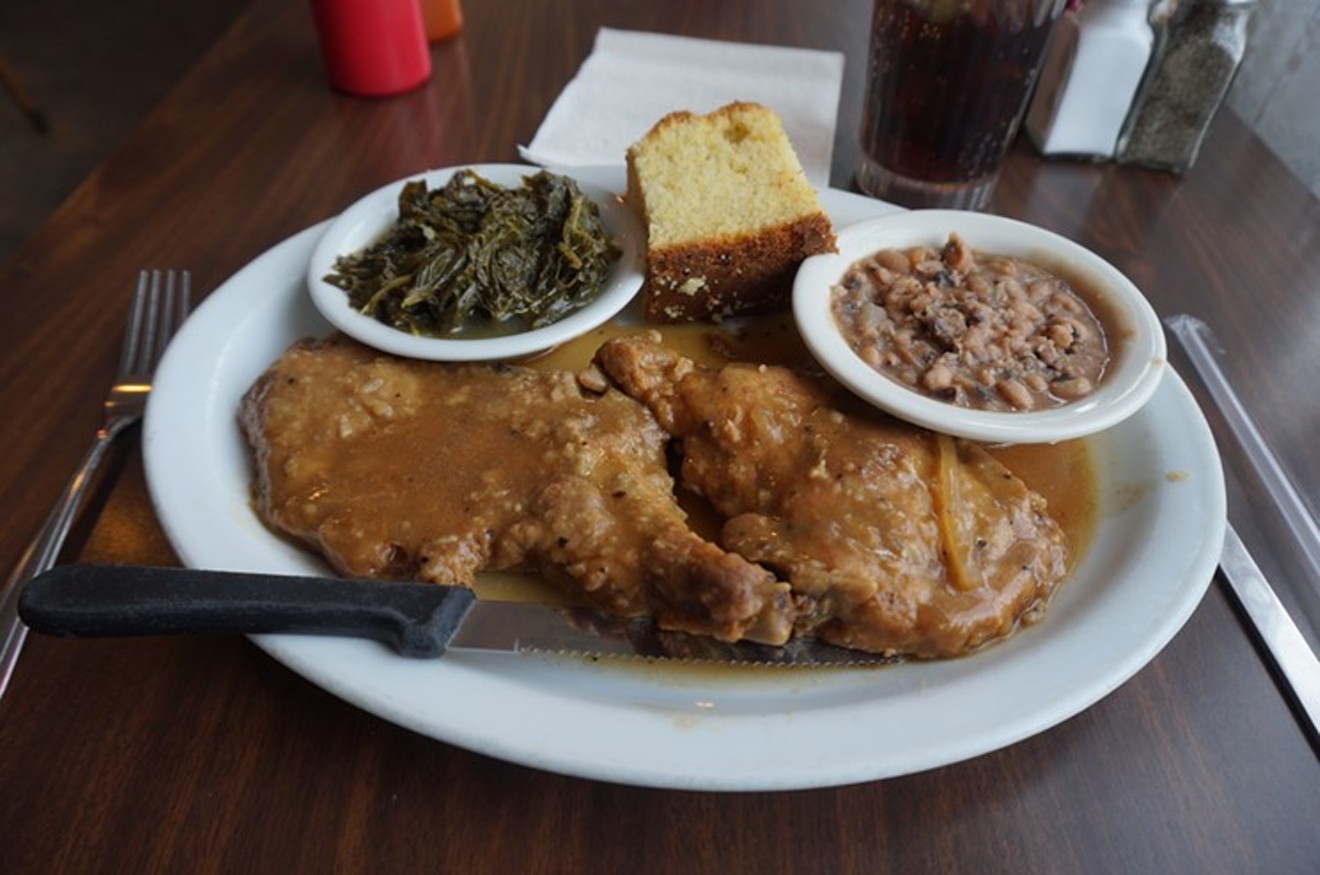 Pork chops in gravy with collards, black-eyed peas and cornbread at the Welton Street Cafe. Mark Antonation
Adrian Miller is a Denver-based food historian and author of three books: the James Beard Award-winning Soul Food: The Surprising Story of an American Cuisine, One Plate at a Time; The President's Kitchen Cabinet and, most recently, Black Smoke: African Americans and the United States of Barbecue. He also appeared in the 2021 Netflix series High on the Hog. But while he's gotten plenty of national love, he still finds time to pay attention to Denver's dining scene.

And as we celebrate Black History Month in February, we're sharing Miller's recommendations for standout, Black-owned soul-food restaurants in Denver. As he notes, it's "not a huge scene, but we’ve got joints that do a good job, and I hope people will support them."

Welton Street Cafe
2736 Welton Street
303-296-6602
Since opening in 1986, this family-owned spot has become a community anchor in Five Points — but on March 12, its current location will shut down. The Dickerson family is asking for the community's support via a GoFundMe campaign as it begins the process of moving into a new space a block away, where it hopes to open by this summer. In the meantime, the kitchen is dishing up fried chicken, pork chops, wings and mac and cheese, with sweet tea to wash it all down. What are you waiting for?

Pork Chop King
Food truck
It doesn't serve the Southern soul food that most people associate with that term, but Miller gives Pork Chop King his "soul food" nod of approval. With an owner from Chicago, the menu packs flavors from the Windy City along with a variety of burgers, dogs, brats and hot links. The pork chop should obviously be your first order, though: It's a bone-in chop with house spice rub, served on a Hawaiian bun with grilled onions.

CoraFaye's moved this year, but it's still a Colfax standard.
Mark Antonation
CoraFaye’s Home Cook'n & Soul Food
15395 East Colfax Avenue, Aurora
303-333-5551
Another longtime favorite for fried chicken, CoraFaye's closed in March 2020 and was MIA during much of the pandemic. But this past April, fans were relieved to see it reopen in a new, more visible Colfax location. The menu has been pared down to one page as the staff slowly gets back into the swing of things, but favorites like the fried chicken, smothered pork chops and daily selection of cake are all available.

Swirk Soul Food
2205 South Peoria Street, Aurora
303-337-0549
The sign outside this small, takeout-only spot in an Aurora strip mall reads "Swirk Supreme Food," and what a supreme selection it has: barbecue, sandwiches, seafood and more. Not sure where to start? Go for the Southern King Platter Dinner, which includes a fried catfish fillet, two jumbo shrimp, one hot link and barbecue chicken, with your choice of two sides.

Blazing Chicken Shack II
5560 East 33rd Avenue
720-596-4501
This soul-food eatery in Park Hill has all the standard items you'd expect, including fried okra, collards and catfish, but Blazing Chicken also has some options that are less common in Denver. Gizzards, pig ears, pork neck bone and gumbo are all on the menu, as is an oxtail dinner only available on Fridays and Saturdays.
KEEP WESTWORD FREE... Since we started Westword, it has been defined as the free, independent voice of Denver, and we'd like to keep it that way. With local media under siege, it's more important than ever for us to rally support behind funding our local journalism. You can help by participating in our "I Support" program, allowing us to keep offering readers access to our incisive coverage of local news, food and culture with no paywalls.
Make a one-time donation today for as little as $1.