A Trademark Dispute Is Smoldering Between Two Restaurants Campfire's first location in Evergreen opened last May. Molly Martin
Two metro restaurants are fanning the flames of a smoldering trademark dispute. Mike Refling, co-owner of Denver's Colorado Campfire, wants Campfire Evergreen to change its name and stop using an illustration of a campfire in its branding. In Refling's opinion, the Evergreen spot is violating his trademark for the Colorado Campfire name and logo. Chef Jared Leonard, owner of Campfire Evergreen as well as four other eateries in the metro area, disagrees — and he's standing firm.

Refling and a business partner opened Hayter's & Co. at 1920 Blake Street, in 2010. In 2015, the spot added a rooftop patio serving Colorado liquor and beer, dubbing it Tap XIV (that's "fourteen," for those of you who weren't around when Roman numerals were still in common usage). In January 2018, the partners opened Tap XIV Uptown at 400 East 19th Avenue, but just twenty months later, Refling was looking to rebrand. "With the Uptown location, we wanted to do nicer food and better cocktails," he explains. "It was kind of confusing people. [They were] showing up at Uptown expecting a rooftop patio." 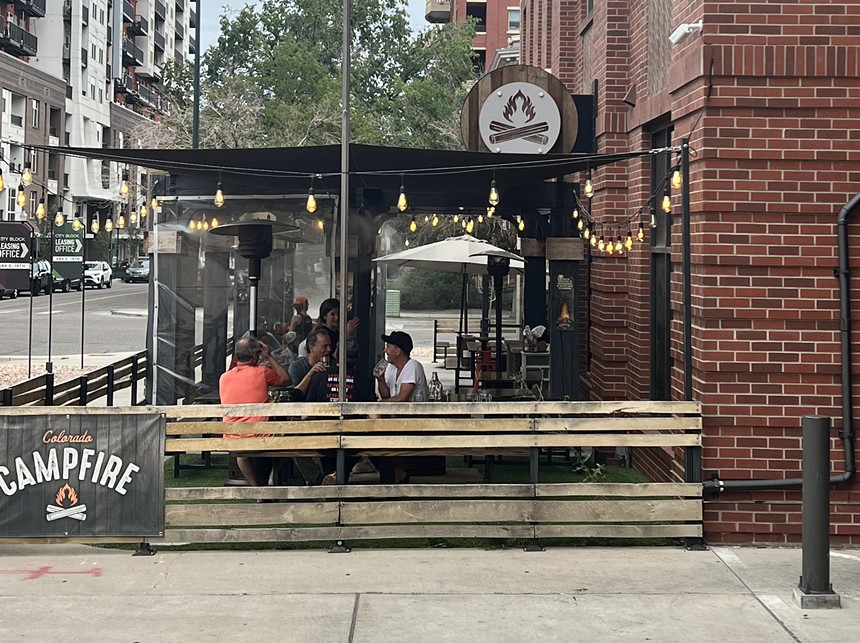 The exterior of Colorado Campfire.
Colorado Campfire
Refling selected the name Colorado Campfire after a quick Google search informed him that a restaurant named simply Campfire (his first choice) already existed in California. In November 2019, the first posts went up on Colorado Campfire's Instagram page, and Refling says the name change was completed in January 2020. According to documents received by the Colorado Secretary of State, Refling filed for a trademark on a "campfire icon with flames and firewood paired with our trade name, Colorado Campfire," on July 7, 2020. 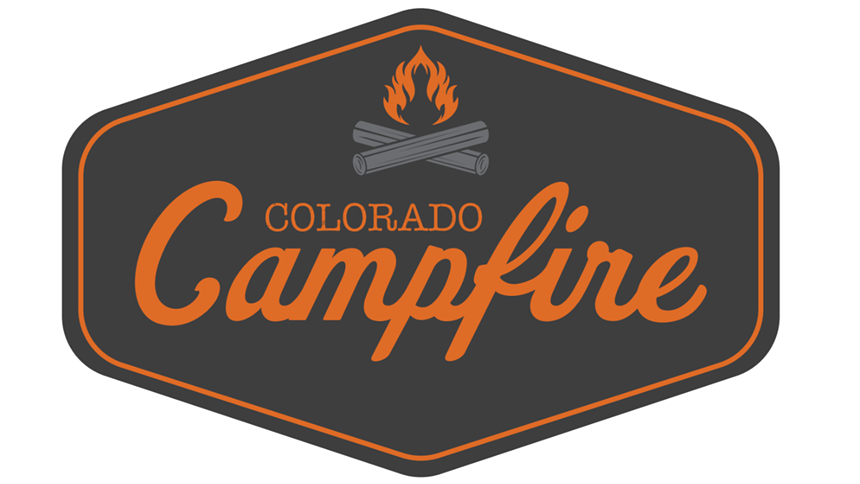 Colorado Campfire's logo, which is trademarked.
coloradosos.gov
That was Jared Leonard's Campfire Evergreen, which would ultimately open in May 2021 at 27883 Meadow View Drive in Evergreen. Leonard is well known on the Denver dining scene; along with his wife, Amanda Leonard, he also owns AJ's Pit Bar-B-Q, Au Feu, Grabowski's Pizzeria, the Budlong Hot Chicken and the soon-to-open Campfire Lakewood. (Leonard says that outpost should debut in September.) The couple also owns five Budlongs locations and Hamburger Stan in Chicago, so Leonard is no stranger to creating and expanding restaurant brands.

Refling emailed Leonard on September 29, 2020, expressing his concern that the name and branding of the two spots were similar enough to cause confusion. "I really object to the name, because we’re in the same market and we’re doing the same sort of industry, a sit-down restaurant. It's not like they’re a coffee shop or even a brewery," he says.

Leonard responded immediately, noting that he wasn't aware of Refling's operation and saying he didn't think the two would be confused.  "They are in very different markets (urban vs. rural)," he wrote. "There are many examples of restaurants with similar names, even in the same city, and it’s not as big of a deal as it initially seems. Example: 'The Smith' & 'Smyth' in Chicago is just one. Happy to talk if you have further thoughts on this, but those are my initial." (The restaurant Leonard refers to as "Smyth" is Smyth & the Loyalist.) Refling responded on October 6, asking to set up a meeting; Leonard said he was out of town through the end of that week and would be happy to get together when he returned. According to Refling, Leonard never followed up on that promised conversation.

At that point, Refling met with an attorney about the possibility of legal action. After a cease-and-desist letter was sent to Leonard on November 4, 2020, Leonard responded via email that he wouldn't be changing Campfire Evergreen's name because "our logo and names are recognizably different. Colorado Campfire and Campfire Evergreen are two different names." That same day, Refling applied for a federal trademark on both the name Colorado Campfire and its logo.

Leonard maintains that the names are clearly distinct. "We’ve talked to attorneys, and from a legal standpoint, the names aren’t confusing," he says. "They're very different concepts. I'm pizza and barbecue, and I don't really know what they do." (Colorado Campfire has a single barbecue plate on its menu, and does not serve pizza.)

Asked about possible similarities between the logos, Leonard replies, "I'd never seen theirs before ours was designed. Theirs is a font; ours is custom lettering."

He says that he didn't know about Colorado Campfire prior to hearing from Refling. "We certainly didn't copy them," Leonard adds. 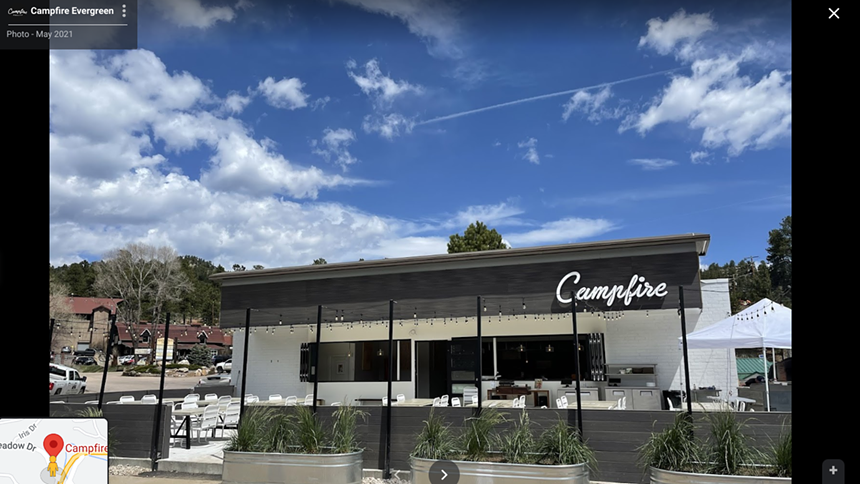 Campfire Evergreen in May of 2021.
Google Maps
On that, the two agree. "I don't think he was like, 'I'm going to copy that.' But it doesn't matter, either," Refling says, pointing out that he contacted Leonard well before Campfire Evergreen opened, giving him plenty of time to make branding changes prior to the Evergreen eatery's debut.

After Leonard responded to the cease-and-desist letter, Refling declined to pursue legal action at that time. Restaurants were facing constantly changing COVID requirements in the fall and winter of 2020, he notes, and he didn't want to spend money or time on a lawsuit that would be moot if Campfire Evergreen didn't even open.

But Campfire Evergreen did open, and soon Colorado Campfire was getting phone calls from customers attempting to order items from Campfire Evergreen's menu. And since then, Refling says, "Sometimes we have people order online at their place and show up at ours, or vice versa. That’s happened a number of times."

Colorado Campfire general manager Renee Epps corroborates this. "Once [Campfire Evergreen] opened and people were doing curbside, it was about twice a week," she says of customers who would place an online order with Colorado Campfire and mistakenly show up at Campfire Evergreen to retrieve it. "People would call and say, 'I'm sitting outside.' I’d say, 'Ma'am, I'm literally looking outside and there’s no one there.' You've already wasted the money making the food for no reason and now you’re being cussed out because someone made a mistake."

Although confusion with online ordering has slowed down, Epps says, phone calls confusing the two eateries are up to about to four or five a week, "especially since they’re opening in Lakewood. Now it’s just, 'Hey, can I order a pizza?' 'No, that one's in Evergreen.' It’s quick and easy, but it takes away from what you’re doing."

Both websites use Toast, an online ordering platform embedded in the restaurants' websites. Leonard characterizes the ordering mix-ups that Refling and Epps describe as improbable: "If someone shows up to pick up food from somewhere thirty miles away, that’s bizarre to me. ... I don’t think people are confusing them." But Refling also claims that Colorado Campfire has received mail addressed to Leonard, and that people have appeared at the Uptown restaurant expecting to meet with him. In this Google Maps image dated April 2022, the sign outside Jared Leonard's new Lakewood restaurant simply reads "Campfire."
Google Maps
Could the opening in Lakewood further confuse the issue? "Lakewood will be called Campfire Lakewood, Leonard points out. "To me, no, it's not confusing. With staffing issues and food costs, I have other things to worry about."

Refling is not so sanguine about that Lakewood expansion. "If they’re going to be a one-location place and open in Evergreen, I wouldn’t like it, but maybe I'd let it slide," he says. "But when they're going to expand — I don’t know how many locations they’re going to do. I have a big problem with that."

Leonard insists that he was not aware of any issues with customer confusion. "If someone came into Evergreen and said, 'I had a rude bartender downtown,' I’d be surprised," he responds. "I don’t think [Colorado Campfire] has any notoriety we’d benefit from. I know they don’t. ... Is he getting notoriety from me?"


"By using our intellectual property you have caused massive confusion in the marketplace. We have an almost weekly incident where someone confuses our restaurants. We have been documenting each and every one of these incidents.

Examples include, but are not limited to:
-Calls for to go orders where people try to order items from your menu
-People asking about our new locations in Evergreen and in Lakewood
-Several people have shown up to meet with the owner, Jared
-People ordering from us online and showing up to pick up their food at Campfire Evergreen
-People from Lakewood coming in to sample the food because “we” are opening a new location near them

Refling says he never received a response from either Jared or Amanda Leonard. Asked if he has plans to communicate with Refling, Jared replies, "When the lawyer gets involved, that’s when I usually stop talking to people."

And Refling is prepared to file a lawsuit — especially if the Leonards proceed with opening their Lakewood outpost. "I don't want to do that," he admits. "I know opening a restaurant is a hard thing. I don’t think there will be any winners from this. If we win, it’ll be a ton of time for me and my staff, [and] l'll feel bad if they have to pay legal fees."

Leonard is equally steadfast. "Legally, there is no case," he insists. "If he wants me to rename it, the answer is no." The courts may ultimately decide who gets the name, but in the meantime, it looks like Refling and Leonard won't be swapping friendly stories around a campfire any time soon.