Nic Lebas on Culinary School, the South of France and Panzano 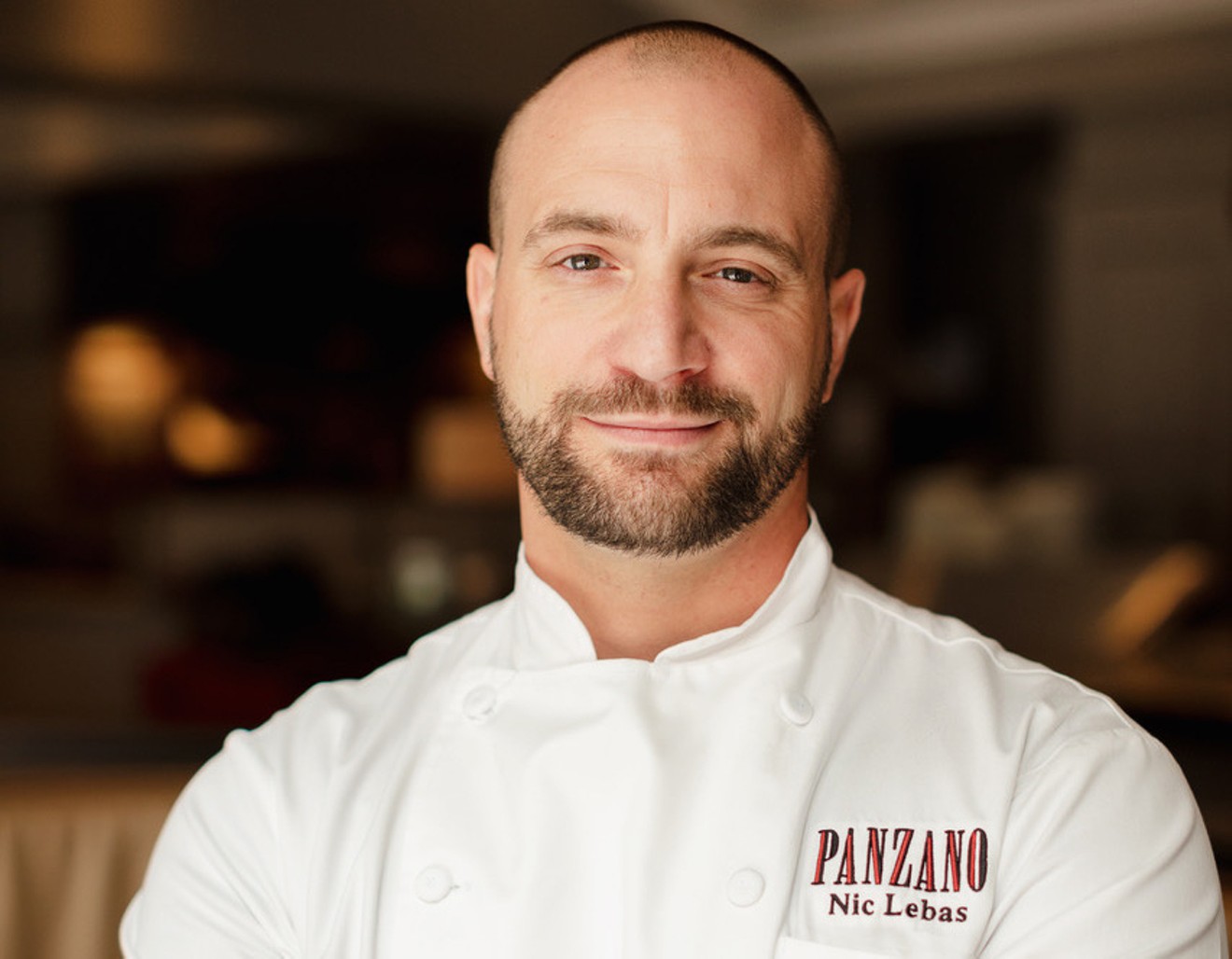 Nic Lebas will preserve Panzano’s legacy while drawing on his French roots. Aaron Colussi
Nic Lebas grew up in the south of France, where cooking with his grandmother ignited his interest in food. After culinary training in his home country, he moved to Mexico, eventually making his way through a number of North American cities before landing a position with a Kimpton hotel in St. Petersburg, Florida. When the Panzano executive-chef position opened up, Lebas leaped at the opportunity to move to Denver and to draw from his roots to refine the Italian menu of the Hotel Monaco restaurant. In this interview, he talks about how France’s culinary-school requirements go a long way toward professionalizing the industry, the problem with prioritizing authenticity over the American palate, and why southern French cooking isn’t so different from Spanish or Italian.

Westword: You grew up in France, where you learned to cook. What ignited your interest in food?

Nic Lebas: I started in my grandmother’s kitchen; my grandmother is from Italy. I started watching her cooking classic food — gnocchi, spaghetti, lasagna, fresh pasta. My mother was a server. I’ve loved it since I was a kid.

How did you get started in the industry?

I started as a dishwasher in a pizzeria in the south of France, and I worked my way up and made pizza. After that, I went to culinary school for two years. In Europe, you cannot get a job in a restaurant if you do not have a diploma in culinary. For me, my diploma was very important. If I didn’t have that diploma, I couldn’t have found a job in a kitchen. Here, people say, “Well, you don’t have experience, I’ll be your teacher.” In Europe, they don’t have time to teach you; if you qualify, they expect you to be taking care of A, B and C. After that, I spent a year working in Lyon, the capital of gastronomy.

Sounds like culinary school’s role in the French restaurant industry is in great contrast to its role in the American industry. Do you think it has an impact on the way cooks think about their profession?

Here, it’s often, “I didn’t finish school or make it, so I’ll go cook.” In Europe, to be a server or cook, you still put your time in — it’s a profession or career. It’s a really interesting difference between the two. A lot of cooks [in America] now come out of culinary school and think they’re going to be TV stars or the executive chef. That’s something that struck me; they all call themselves “chef.” They say, “I’m a chef — I want to make $18 an hour and do your job.” But when it’s time to work hard and put the time in, it’s too difficult. It’s hard to find passionate, committed cooks. In France and Europe, you’re a commis, cook, pantry cook, line cook. It takes ten to fifteen years to become a chef, not just a few years. Your first chef treats you like military; you have ranks. To do this career and care and last, you have to have the passion — it has to be in your blood. I always knew I wanted to do this. It was always in my blood. In Europe, getting into culinary school, sommelier school, server school — for us, it’s a career; that’s what we’re going to do. Here, sometimes, it’s, “I like cooking, I’m going to go to culinary school.”

Do you think culinary school is the secret to professionalizing the industry and solving our labor shortage here?

I don’t have the answer for where people are missing the boat on that. If you look at fine-dining restaurants — French Laundry, Bouchon, Daniel Boulud — do you think they’re making more than $12 an hour? No, those kids have passion. My cook might make more than their cook, but the knowledge is so different. It’s upside down. In Europe, it doesn’t matter where you’re at, whether you make pizza or work for Alain Ducasse — pay starts the same. Whether you’re a server or cook, you’re making 1,300 euros a month. You’re not paid hourly, so maybe that’s also changed the game.

The bar at Panzano.
Chad Chisholm
You’ve taken over Panzano, which has a long legacy in Denver. How do you walk the fine line of preserving that legacy while injecting your own touch?

I don’t want to change anything; it’s been working for nineteen years. [Elise Wiggins] did something amazing here. My approach is to keep what she created and to modernize it just slightly. Not powders or molecular stuff, but refined dish presentations, and digging more into deep flavors and ingredients. I want to keep what she had and put a little of myself in it. There’s a new menu coming up in January to show what I can do with that style. It will stay true to Italy with the ingredients, but I’ll inject a little French.

What makes your touches French?

The south of France — Marseille, Nice, Cannes — is very close to Italy and Spain. You see a lot of tomatoes, fennel, olives. I’d put olives everywhere. We do cold soups and tomato soups. And bread. We cook with olive oil; we don’t use a lot of butter or heavy sauce. We respect the ingredients. It’s maybe a little more refined or upscale than classic Italian or Spanish. I present them a little differently than what you see or what you expect. The south of France is a mixture of all those cultures.

Are you drawing from your Italian grandmother as you plot the menu?

It’s hard to reproduce what your grandmother does — and I don’t think it would be to the level of the restaurant. In a restaurant, you have more ingredients and more steps; I don’t really have a recipe from my grandmother. She used to do a veal stew with cream. It was a French dish, but she turned it into a traditional home meal. It was veal blanquette, but she used to put whole-grain mustard and olives in it. I don’t think it would work here, but who knows? Maybe a different take would. Sometimes I can bring a dish from France or Italy, but it won’t work over there. To be successful, you have to Americanize it. At my last property, I was putting out a dish that was very authentic, but it was not appealing to my guests. I had to turn it around and make it more approachable to North America. Take the pissaladière: It’s an onion pizza, plain and simple, and it has cured anchovies, olives, slices of tomato — it’s not for everyone. If I put it on the menu, it might be not successful. I love the saltiness and sweetness, but it’s not your style; maybe you want to tweak it, maybe you want to use cheese. It’s a risk; it’s authentic. If you go to Italy, you’d find it. In the south of France, you’d find it. Here, I could do a cured or smoked-salmon pizza. Everyone is familiar with that, so it’s a safe bet. It’s authentic, as well, but safer than the other one. I’ve been eighteen years in North America. In the first five years, I would have put that pissaladière on the menu. But I’m changing my vision and refining dishes as well.

This position opened a couple of months ago, and I was interested. I didn’t know anything about Denver, but the Italian concept was very interesting to me. I really fell in love with the city. It was a bigger city. I’d been missing all four seasons — that was very appealing to me. I don’t know much about Denver, I don’t know the culinary scene too much.

Rice, chicken — boring stuff. I really like to hike and am into fitness. My wife is a personal trainer and law enforcement professional. So I eat boring at home: rice, chicken, salads, fruits and vegetables. When I decide to cook, I put a roast in the crockpot, and there we go.

How about a shift drink?

When I get home, I like whiskey. Japanese whiskey. Or a good Johnnie Walker Black Label. As a cook I used to go out, but now I’m too tired for it.