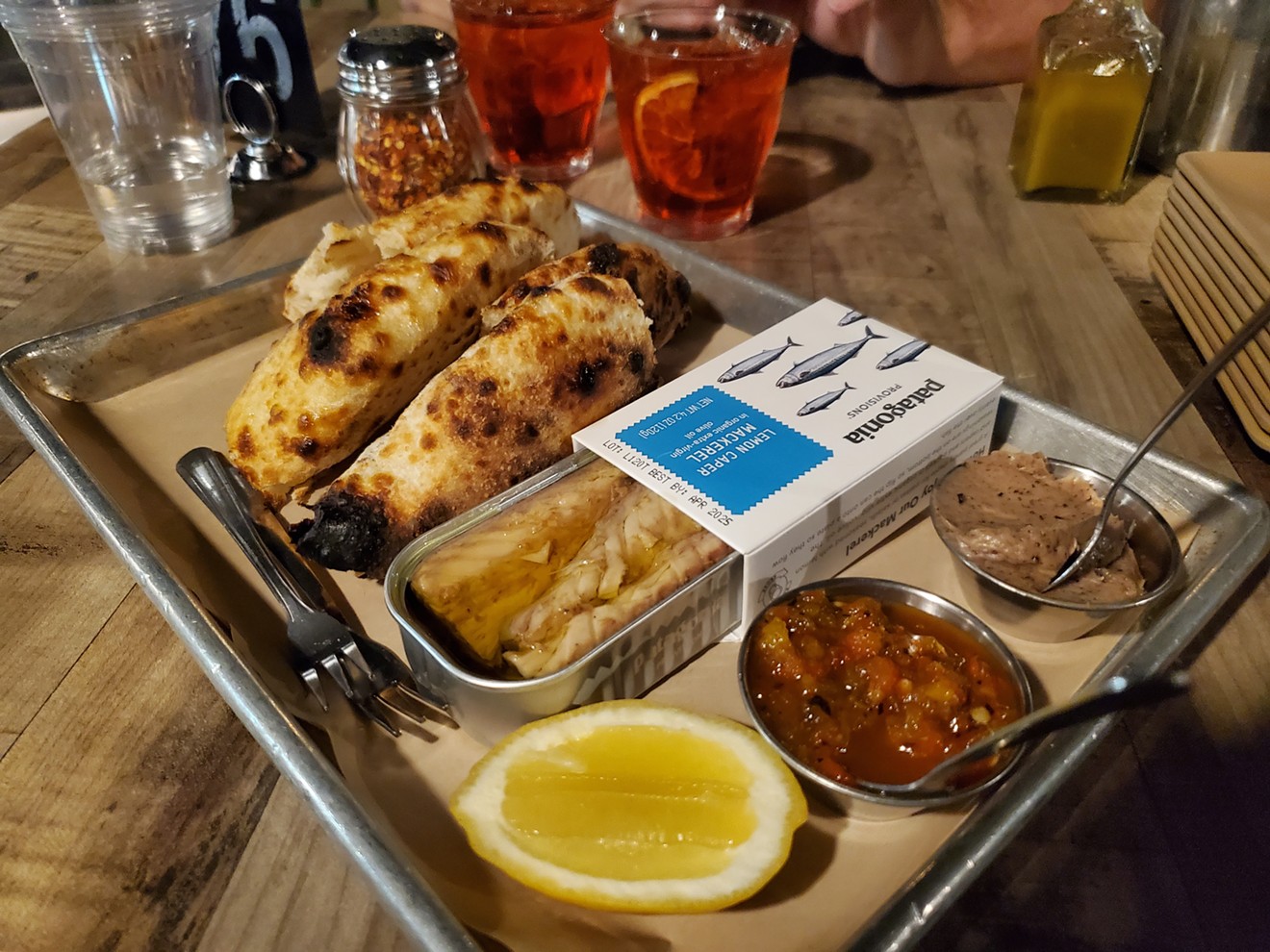 Tinned fish has been a staple at Cart-Driver for a long time, but expect to see it on more menus in 2023. Molly Martin
When the new year hits, so do food trend lists. For a while, the trend was to post your Top Nine on Instagram. This year, trends themselves are the trend, with screenshots of lists showing people's takes on what's in and what's out making the rounds.

Here are six food trends I'm ready to kick out of Denver, along with six I'm eager to welcome to town in the new year. Charcuterie can stay, but "charcuterie" needs to go.
Molly Martin
Out: "Charcuterie" boards
In: Tinned fish
I love charcuterie — by which I mean cured meats, and Denver has a lot of solid experts. Picking from a selection of quality salami, prosciutto and chorizo on a restaurant menu is the kind of good time that's timeless. I'm also here for the charcuterie to-go trend being ushered in by places like Graze Craze and Cheese Meat Board.

But I hope the bastardized, put-anything-on-a-board-and-call-it-charcuterie trend doesn't further infiltrate restaurant menus in the Mile High this year. If Snooze adds something called a Shmear Charcuterie Board in the next few months, I won't be shocked, but I will be disappointed — though brunchers will probably happily line up for it.

Tinned fish, on the other hand, was very hot in the last few months of 2022. It took over TikTok and sent the masses out searching for mussels, oysters, herring and more as people embraced something that's been the standard in countries like Spain for...forever.

In Denver, Ultreia and Cart-Driver have been dishing up preserved seafood for years. But this year, I'd love to see these tasty seafood treats pop up at more low-key spots. A tinned fish bar snack at a dive paired with my vodka tonic? Yes, please. Noisette was one of many new fine-dining restaurants that opened this year.
Courtesy Noisette
Out: Ghost kitchens
In: Fine dining
Even before the pandemic, ghost kitchens were on the rise. At best, they offer a way for creatives in the culinary industry to test out a concept with much lower overhead and less risk than are involved in launching a food truck, much less a brick-and-mortar. At worst, they're a cover for Chuck E. Cheese to sell its pizza under a pseudonym via a delivery service.

When the pandemic hit, though, it looked like ghost kitchens might really become one of the new forces in the food scene. But after a full year of restaurant operations without pandemic-related restrictions, ghost kitchens have become mere ghosts of their once-promising selves.

"People want to celebrate, get out, eat something besides the sourdough bread they’ve learned to bake from that YouTuber," says John Imbergamo, a longtime industry vet and owner of the Imbergamo Group who's shared his on take on trends in 2023. And specifically, people want fine dining, he adds.

Denver restaurateurs were already banking on that in 2022, as more and more fine-dining options joined the scene, from the massive Water Grill downtown to the charming Noisette in LoHi. More are coming this year, and I'm finally feeling ready to swap out my Saturday night sweats for some (very low and comfy) heels while eating at as many of these new restaurants as possible — and I'll bet I'm not the only one. 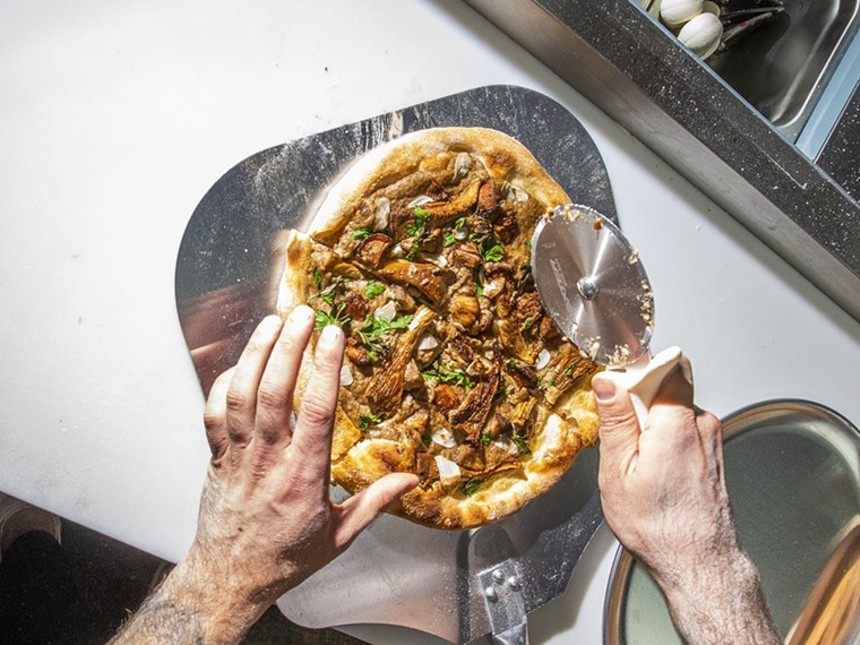 Everyday Pizza's food is all vegan with no plant-based meat substitutes in sight.
David Williams
Out: Plant-based meats
In: Whole ingredients
Last year, I found myself taste-testing a mushroom root-based meat called Meati at Birdcall and noshing on Beyond patties at vegan fast-food concept Next Level Burger. And both were...better than I expected, actually. But as a meat eater who really loves vegetables, I've never gotten excited about meat replacements; they've become a lazy way for many restaurants to offer something for vegan and vegetarian diners.

What I am excited about, though, are places like Somebody People and its new sister concept, Everyday Pizza, which instead offer meat-free dining using a vegetable-forward approach, leaning on whole foods to create downright delicious eats that appeal to everyone.

In 2023, I want to see more restaurants and bars going beyond Beyond patties and embracing the universal appeal of meat-free dishes made with whole ingredients. The Hatch Green Chile and Cheddar Twirl from Hearth in RiNo.
Molly Martin
Out: Doughnuts
In: Savory baked goods
From the flaky pastries at Parlor Doughnuts to the potato-style and sourdough takes from Berkeley Donuts inside Hops & Pie, there are some solid choices if you're craving a sweet treat for breakfast in Denver. But I can't remember the last time I really craved a doughnut.

What I do remember, though, is biting into a Green Chile and Cheddar Twirl at Hearth, a bakery and cafe that opened in RiNo last September. Sometimes I wake up extra early so I can grab a bacon and egg-filled pastry from Tokyo Premium Bakery on Pearl Street, and I would wait in any line for the garlic knot and birria roll, both made with flaky, laminated dough, at Bakery Four.

So bring on the savory pastries, please. Denver is jam-packed with talented bakers, and I'm ready to bite into whatever non-sweet treats they come up with. Can we finally give Brussels sprouts a break?
Guapo Taco
Out: Brussels sprouts
In: Zucchini
The tiny cabbages once loathed by children across the country suddenly sprang into fashion a lifetime ago, it seems. So why are they still on nearly every menu? They're a sure sell, and I totally get the appeal of a plate of fried or roasted Brussels sprouts. But they've been done every possible way by now.

I definitely don't hate them, but I am terribly bored by them.

There are plenty of other veggies waiting in the wings, such as zucchini. The common complaint is that this squash is squishy, but if we learned anything from Stanley Tucci's viral zucchini pasta recipe, it's that this is a veggie with star power.

It can be caramelized to golden perfection. It makes for a dreamy pair with creamy cheeses and bright flavors like lemon. I, like Tucci, love it in pasta, and sometimes I even shamelessly eat chunks of it sautéed with garlic straight from the pan for dinner.

So here's hoping that this year, Brussels step aside and let another underrated green vegetable shine. It's time to get used to $20 burgers.
Molly Martin
Out: Complaining about menu prices
In: Understanding inflation
No one likes paying more for things, especially as the threat of a recession has people watching their bank accounts closely. Yes, it totally sucks that the lunch you used to get for $10 is now closer to $20. It hurts when your favorite pizza is over $30, plus tip, plus delivery fee. A $20 cocktail? Seriously?

Yup, seriously. If you want to rant about these things to your friends, fine, but don't take it out on small businesses that are simply trying to survive. Restaurants and bars aren't in the business of price gouging (leave that to Xcel and its confusing bills). They're also struggling with rising costs, as the price of everything from eggs to flour to pizza boxes has skyrocketed.

So let's change the narrative this year and instead focus on understanding why that burger-and-fries meal is now $25; complaining about it on Yelp or to your server and expressing your frustration by not leaving a tip isn't solving anything.
KEEP WESTWORD FREE... Since we started Westword, it has been defined as the free, independent voice of Denver, and we'd like to keep it that way. With local media under siege, it's more important than ever for us to rally support behind funding our local journalism. You can help by participating in our "I Support" program, allowing us to keep offering readers access to our incisive coverage of local news, food and culture with no paywalls.
Make a one-time donation today for as little as $1.