Your Latest Denver Utility Bill: The Xact Opposite of Xcelling 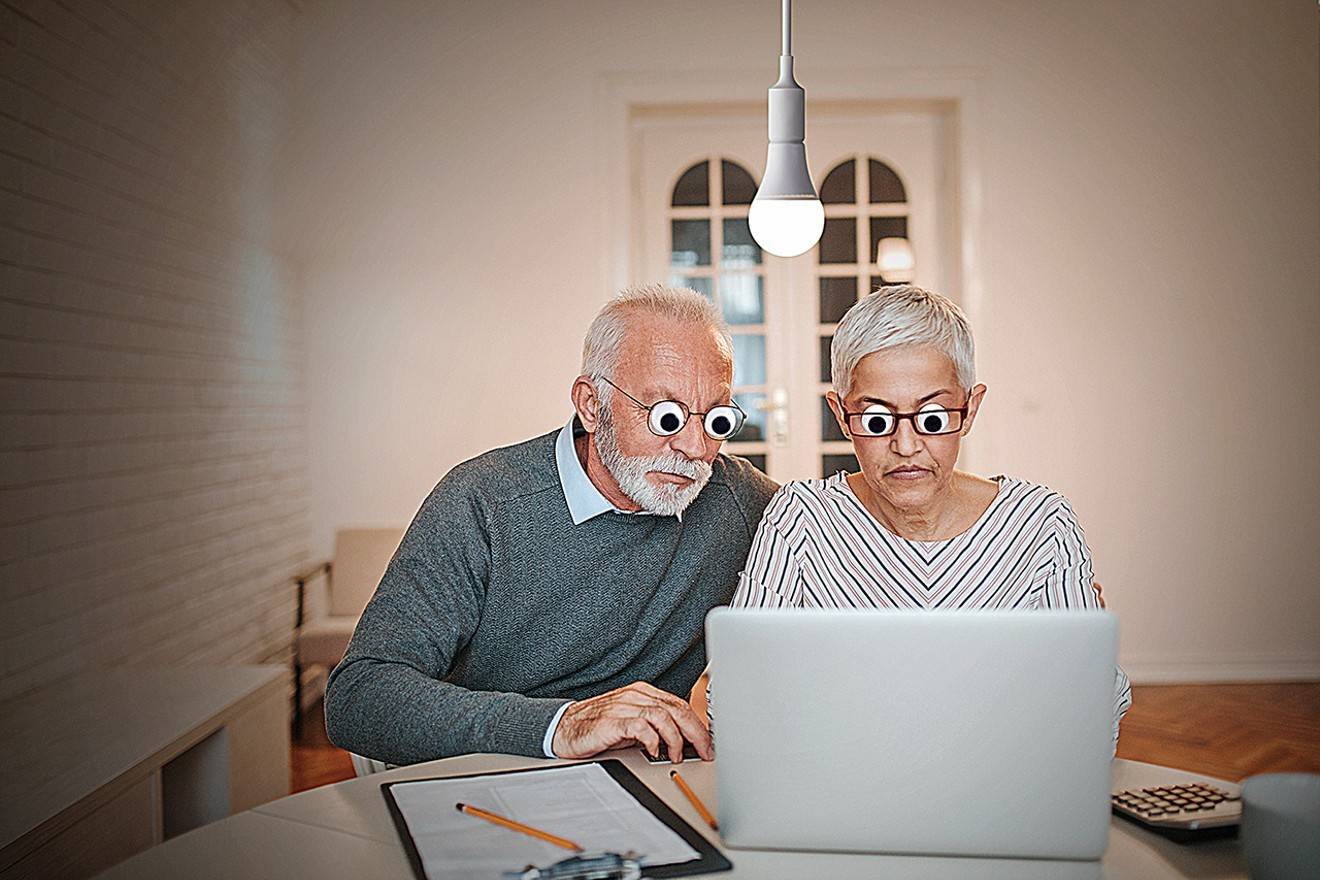 Recognize this couple? They're on some of your Xcel bills, although we think this depicts a more realistic reaction to the most recent version that for almost everyone was double what it had been. Getty Images/Westword Photo Illustration
In 2021, winter storm Uri swept through the country, causing Xcel Energy to spend over $500 million more than normal on natural gas. In June, the Public Utilities Commission decided the company could recuperate those costs from customers' bills for up to thirty months despite findings of failures on the company’s part during the time period of the storm.

In a move akin to your mom removing a single sprinkle from your ice cream sundae after you talked back, the PUC “penalized” Xcel for those failures by reducing the amount it could recover from $509 million to $500 million.

As winter storm Elliott sweeps through the country, plunging temperatures to record lows, it’s worth asking: Will customers have to foot the bill for errors made during this storm, too? It's also worth mentioning that Xcel has been sending out notices of more increases to come in "the next couple of days," coinciding with the urgent need for higher heat during the current Arctic blast. Inexplicably, the notices also contain "key ways to save" on your bill, some of which are in direct contradiction to the advice given to save your pipes from freezing and bursting, such as setting the thermostat to "58 degrees when you're away" (plumbers recommend setting it at 65 or higher to ensure that you don't return to a flooded home).

A survey of Westword employees found that most people’s bills had nearly doubled from their previous billing period to this one. Some of that cost is the result of extra energy usage given colder temperatures, but the rest is made up of cost adjustments represented by seemingly random letters and abbreviations on Xcel bills that feel impossible to decipher at times.

We reached out to Xcel to ask the company to explain what each charge represents but (surprise!) didn’t hear back, so here’s what we could figure out on our own about what each line item means on the most recent bill that probably made your eyeballs fall out:

Electric Service & Facility charges are at the top. This will normally cost $5.60.

If you’ve switched over to Time of Use rates, these three categories will be at the top:

Weekends and holidays count as Off-Peak times; winter rates run from October through May, and summer rates from June through September. Xcel is in the process of switching every customer to a smart meter and Time of Use rates by 2025.

The company said customers could save money with this system. How’s that working out for you?
Meanwhile, those who haven’t switched over will see a winter season rate of $0.071360.

Everyone has these other charges, abbreviated as they appear on your bill:

EGCRR stands for Extraordinary Gas Cost Recovery Rider. It’s truly extraordinary that we’re stuck paying for winter storm costs, but what choice do we have?

Trans Cost Adj translates to Transmission Cost Adjustment. It covers changes in the cost of power delivery in addition to the service and facility charge you’re already paying.

Elec Commodity Adj (some bills say ECA instead) accounts for the cost to the company of purchasing energy and fuel used to generate electricity. It’s adjusted quarterly to represent the actual commodity costs of such fuel, which is not generating Xcel any income. It will next be adjusted in January.

Demand Side Mgmt Cost is used to recover costs from Xcel projects that reduce electricity demand, such as the Colorado AC Rewards Program that pays people $25 per year to take control of the cooling of their home during high-demand events in the summer and which prevented people in Colorado from adjusting their thermostats in August during a heat wave. We’re wondering if those handy emails sharing “energy savings tips” like turning down the thermostat and closing some doors count as a demand side management cost?

Purch Cap Cost Adj is a shortened version of Purchased Capacity Cost Adjustment. It represents how much Xcel paid to buy energy from other providers. Of course, we end up paying in the end.

Renew Energy Std Adj is for Renewable Energy Standard Adjustment and was used to help pay to increase the amount of energy from renewable sources. A bit of good news? This charge will disappear after this month!

Colo Energy Plan Adj is helping Xcel pay for the early retirement of the Comanche Generating Station in Pueblo. It’s one of the only charges that doesn’t totally fill us with eye-popping rage.

Energy Assistance Chg stems from a state law passed in 2021 that contributes to bill assistance and weatherization for low-income households. In October it went from 50 cents to 75 cents because it was adjusted for inflation. Nice to know something is adjusting for inflation!

Gas Service & Facility charges for gas are around $10, but can fluctuate based on therms used.

Usage Charge is the base cost of natural gas. It’s currently set at 31.7 cents per therm.

Interstate Pipeline covers Xcel costs from pipelines and facilities used to deliver gas to the Xcel system. Is this what they mean by trickle-down economics?

Natural Gas 4 Qtr refers to the fact that customers pay the actual commodity price of natural gas on their bills. Every quarter, utilities submit commodity adjustments to the PUC based on how much they spent on natural gas. Xcel did so on October 1, but owing to a decrease in natural gas prices nationwide, then filed an interim fuel price adjustment to deliver savings to customers immediately rather than waiting for the next adjustment, which would normally hit in January.

The company said the move would save people an average of $33 on their bills in December, but it didn’t account for the hike in prices in November. Of those in the Westword office, every person’s bill went up from October to November because of the switch from the quarter three number to the quarter four number.

DSMCA stands for Demand Side Management Cost Adjustment. Rather than keeping the notation consistent between the electric and gas side of the utility, the bill uses letters instead of shortening each word on the gas side. It’s for the same purpose, but in this case for natural gas: paying for projects that reduce demand. We’d like to suggest another phrase DSMCA could stand for: Don’t Steal My Cash Anymore!!

GRSA-P is for General Rate Scheduled Adjustment – Pipeline Systems Integrity Adjustment, and it alters base rates as approved in revenue requirement rate cases. No, we honestly can’t say exactly what that means.

EGCRR (some of our Westword staffers had this charge listed under gas twice for some reason). That winter storm recovery hits you twice, which is exactly how it feels to look at these bills lately.

GRSA is a General Rate Schedule Adjustment. It adjusts the base rate for gas service to account for revenue increases or new rates.

Energy Assistance Chg is similar to the one for electricity. For the gas side, it helps those who are behind on gas bills and pays for weatherization programs to reduce home heating costs.
The franchise fee that adds an extra 3 percent to both your electricity and gas bill is Xcel’s payment to local governments for using the right-of-way for its services, such as power lines. The money collected is given back to the local government in question.

Want to help us track the Xcel insanity and commiserate with fellow utility bill victims? We’ve started a project on the state of people’s bills and would love to include yours (feel free to remove personal information, and we promise not to share anything specific to you). Send your latest Xcel bill to [email protected]
KEEP WESTWORD FREE... Since we started Westword, it has been defined as the free, independent voice of Denver, and we'd like to keep it that way. With local media under siege, it's more important than ever for us to rally support behind funding our local journalism. You can help by participating in our "I Support" program, allowing us to keep offering readers access to our incisive coverage of local news, food and culture with no paywalls.
Make a one-time donation today for as little as $1.