Gill and her husband, Michael, moved from Atlanta to Denver four years ago, and now they're serving up classic dishes inspired by Southern cooking. Even though they launched Pescky Kitchen just one month ago, their vegan chicken has already been satisfying plant-based eaters and shocking carnivores who have tried the food.

Gill was born and raised in Arkansas and wanted to transform the foods she loved from her childhood to versions free of animal products. “At first it was a bit challenging,” the chef explains, but thanks to a culinary degree from the Art Institute of Denver, the she was able to dial in the flavors she grew up with.

Pescky Kitchen is serving up seitan-based chicken wings for “Wing Wednesday” at Alternation Brewing (1539 South Broadway) on the second Wednesday of every month. The wings, strips and sandwiches are designed to replicate the taste and texture of chicken, along with fries. 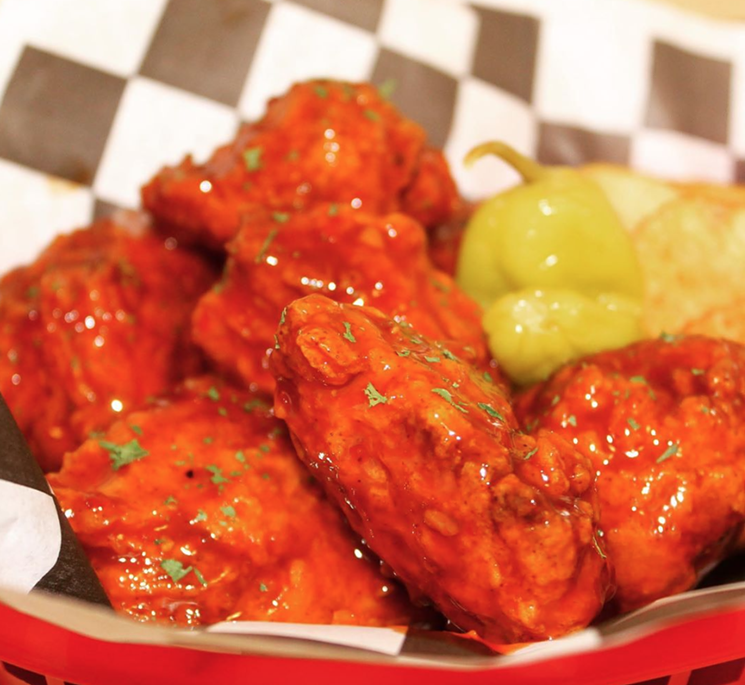 “We pride ourselves on our sauces,” Gill states. There’s always a new sauce either based on traditional regional styles, such as North Carolina- or Kansas City-inspired barbecue sauce, or creative creations like the chef's biggest hit — and hottest offering: garlic Buffalo. The chef also uses Crown Royal, her favorite spirit, in her Crown peach barbecue sauce and “the Royal sauce."

Sides cover a wide variety of comfort foods, including mashed potatoes with gravy, maple carrots, macaroni and cheese and coleslaw. The chef has created a tofu scramble for brunch, too. Other menu items include chopped rib and beer-battered fish. Gill also plans to serve rice and beans, gumbo and a Cajun white queso with red peppers and jalapeños.

In addition to Wednesdays at Alternation, you'll be able to catch Pescky Kitchen for meatless Mondays at Epic Brewing beginning in March, where Gill will create a sauce with one of Epic's stouts. Gill’s ultimate goal is to open a brick-and-mortar restaurant in Denver once funding is secured. For now, you can learn about events by following the Pescky Kitchen Instagram page, and you can contact Gill on the Pescky Kitchen website for information about pop-ups and other services.
KEEP WESTWORD FREE... Since we started Westword, it has been defined as the free, independent voice of Denver, and we'd like to keep it that way. With local media under siege, it's more important than ever for us to rally support behind funding our local journalism. You can help by participating in our "I Support" program, allowing us to keep offering readers access to our incisive coverage of local news, food and culture with no paywalls.
Make a one-time donation today for as little as $1.
Kristen Kuchar is a Colorado writer covering craft beer, food and travel. For Westword, she explores vegan dining and the state's artisan beverages, such as cider and mead.
Follow:
Twitter: @KristenKuchar
Instagram: @kristen_kuchar/