The Best of Both Worlds: An African and an American Girl

Through the years, the Taste of Colorado has offered a taste of all America. Michael Emery Hecker
My family came to Denver in 2004, after my parents and I escaped a deadly civil war in the Congo Kinshasa and fled to the Ivory Coast without saying goodbye to our relatives. After about a year and a half, though, war broke out there, and we fled again, this time with my infant sister. I was four.

The refugee program my parents were a part of was sending people to Colorado. My parents had no clue what that was; they had only heard of places like New York, California and Washington. But Denver would become the home where their two daughters would learn to speak English and the oldest would graduate college.

When moving to a new country, you are bombarded with lots of information, including the “proper” ways to become “American." But mostly, you are taught to adjust as soon as possible. My father was quick to embrace the changes. My mother was not. She feared that if she embraced these changes, a part of our culture would vanish. Her memories of sitting underneath the mango tree with her father would disappear; the memories of laughing with her siblings over fresh cassava and fufu would be gone. My father wasn’t worried, though. He's quite the storyteller, so every night he would tell us stories of Congo and his days of being a troublemaker.

We learned about other cultures, too. My family would visit any and every festival in Denver, including the Taste of Colorado, Cinco de Mayo and the Chinese celebrations. My mom would roll her eyes and say, “This food isn’t even good, it’s nothing like the food back at home” — all while holding a turkey leg in her hand. My father worked at Emily Griffith Opportunity School, where he also took English classes and trained to become a chef. He learned all the American classics, from grilled cheese to chocolate-chip pancakes and steak. What he learned, he taught my sister and me. Together, the three of us would flip omelets and melt cheese. Our favorite place to eat was Red Robin. My father would shout “Red Robin!” and my sister and I would shout “YUM!” as we scrambled to put our shoes on. 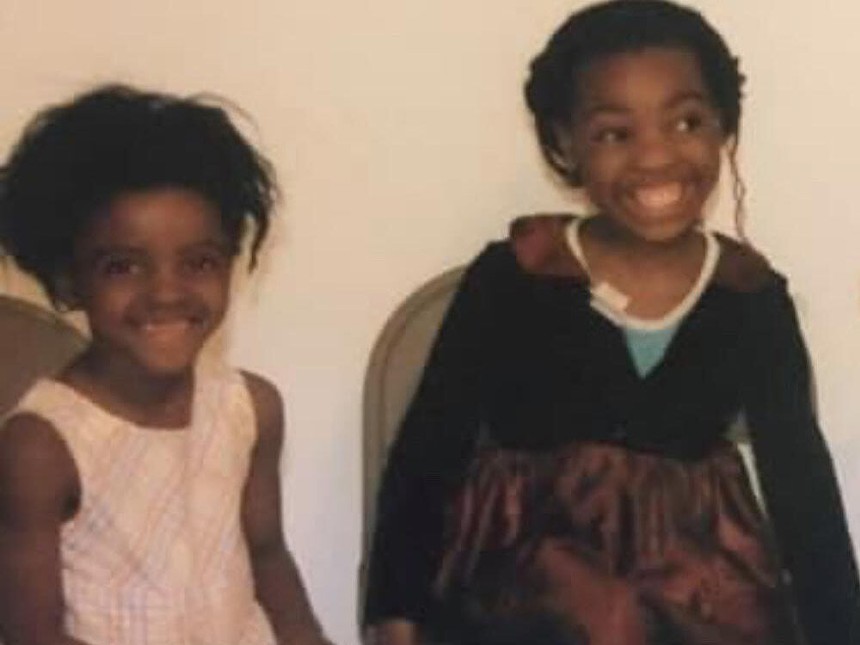 The author and her sister settled in Denver with their parents.
Courtesy Jehu Iyema
Embracing American culture and food left me feeling ashamed of my own culture, food and traditions, though. I dreaded Thanksgiving because while my peers were having all the usual American dishes, I was having chicken, rice and five types of meat, while traditional African music played in the background. I'd told my parents about Thanksgiving, because we were learning about it in school, and my father was also learning about American traditions. One year my parents bought a turkey, and thought it was just like chicken that doesn't take that long to cook. After a few minutes, the giant bird was still looking the same; after three hours my mother decided to throw the turkey out, saying, “It's a cursed bird.” We didn’t have turkey for three more Thanksgivings, until my dad told my mom that “turkey takes all day to cook.”

For a time, shame over my culture and identity affected every part of who I was. My full name is Jehu Iyema, but I begged everyone to call me Jay. I watched all the American TV shows to get rid of my accent and sound more American. I was so ashamed to bring my mother's cooking for lunch, because I knew as soon as I opened my lunchbox an explosion of smell would erupt in the cafeteria. I would wait until recess when everyone was outside to sneak into the bathroom and eat my meal. I remember begging my mother to stop making me lunch and just let me eat hot lunch instead. But hot lunch cost $3, and we didn’t have that.

It took me many years to get rid of this shame. When I look back, I was trying to survive; the quicker I got to be more American, the safer I was from being bullied. But that changed when I went to middle school, where I was surrounded by people who looked like me and came from many different backgrounds.

Every year the students were encouraged to bring food from their homes, and we celebrated each other's countries. I thought it was a trap at first. But on that day, many kids wore their traditional cultural clothing, we ate each other's food, we blasted One Direction, and we sang together. That was the moment I knew I could have the best of both worlds.

Just because I was an African girl living in America didn't mean I had to stop being African. And just because I was African didn't mean I couldn't be an American.
KEEP WESTWORD FREE... Since we started Westword, it has been defined as the free, independent voice of Denver, and we'd like to keep it that way. With local media under siege, it's more important than ever for us to rally support behind funding our local journalism. You can help by participating in our "I Support" program, allowing us to keep offering readers access to our incisive coverage of local news, food and culture with no paywalls.
Make a one-time donation today for as little as $1.