The Best Hamburger in Denver — Every Year Since 2009 Is a patty melt still a burger? We think so. Mark Antonation
Nearly every restaurant of every style in Denver serves its own burger, from fancy steakhouses to corner taco joints. So how do you go about picking the best? You eat a whole lot of hamburgers. Our commitment to ferreting out the best burger over the years has led us into every neighborhood, every suburb and every joint that flips a ground-beef patty. Here are our choices for the Best Burger in our annual Best of Denver edition every year for the past decade. Pass the napkins! This is all you really need in life.
Lori Midson
2009
Bud's Cafe & Bar
5453 Manhart Street, Sedalia
303-688-9967
Bud's Bar is a survivor. It survived a change in ownership and the smoking ban, and it still came out on top. We've eaten burger after burger across the metro area, but we always return to Bud's. Bud's not only serves the best burger in Denver, but it serves the best burger in Colorado, one of the best burgers in America. We can think of maybe two burgers in the whole of the United States better than the double with cheese at Bud's, and Bud's might edge out one of those simply on the strength of the joint itself: an uncompromising roadhouse full of surly waitresses and bikers, where demanding fries (which Bud's doesn't serve) might get you punched in the mouth, and complaining about the wait (which there almost always is, even though it's now open on Sundays, too) will get your ass deservedly 86'd into the parking lot. Bud's ain't pretty and it ain't nice, and it ain't precisely welcoming to strangers. But its burger is perfect. 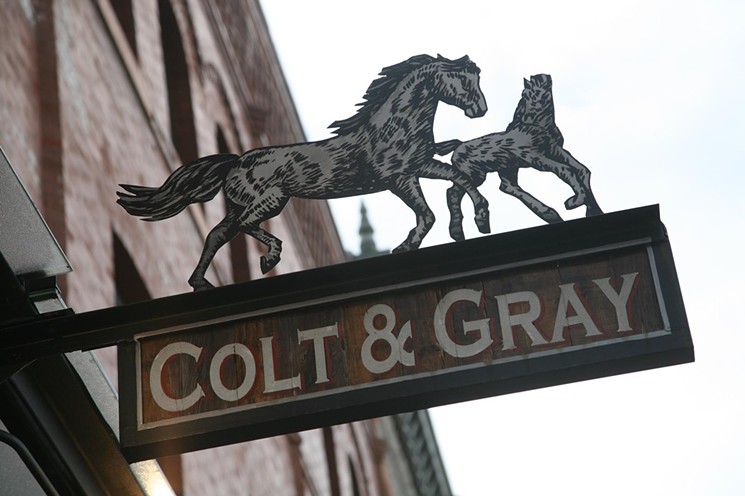 Colt & Gray was our 2010 Best Burger winner.
Westword
2010
Colt & Gray
1553 Platte Street
303-477-1447
Last year, when owner/chef Nelson Perkins revealed plans to open Colt & Gray, he swore up and down that, if nothing else, his kitchen would put forth Denver's best burger. In a city that lives and dies by its beef, those were fighting words. And when that city is suddenly enjoying a windfall of burger joints — with more in the pipeline — that kind of declaration holds as much water as a leaky thimble. But you know what? Perkins was the wrong guy to doubt, because his burger — a stocky, juice-drooling hand-formed patty of loosely packed, house-ground dry-aged chuck, paved, if you want, with a swatch of really good Gruyère and shoved between the lightly grilled cheeks of a brioche bun — is indeed the best burger in town.

2011
Tarbell's
6955 South York Street, Littleton
Tarbell's is certainly not the first restaurant to elevate the burger to lofty, beasty, Herculean status, but while size is in the shoe of the beholder, Tarbell's double-decker burger — all six, maybe even seven inches of it — is, buns down, the best burger in the city. The freshly ground beef, loose and hand-formed into two impossibly thick patties, is judiciously salted and peppered, drooling with juices that blush scarlet, grilled to a perfect mid-rare and shoved between a soft, slightly sweet bun that's slathered with a secret sauce and platformed with lettuce, tomato slices and squares of American cheese that melt into the depths of your fluttering heart. Tarbell's closed later in 2011. Juicy Burger won it all in 2012.
Courtesy of Juicy Burger
2012
Juicy Burgers & Dogs
6878 South Yosemite St., Englewood
303-741-3647
Juicy Burger & Dogs, a buzzy joint in the ’burbs, makes the best burger around — and it's easy to see why. That's because the burger isn't all gussied up with elaborate toppings or brioche bread. Instead, a hand-molded, properly salt-and-peppered patty — made of freshly ground beef, lamb or chicken — is char-grilled until it gushes fatty juices and oozes the scent of an outdoor barbecue, then slipped onto griddled pumpernickel or a white bun baked by Udi's, blanketed with a thick slice of melted Tillamook cheese or smeared with spreadable cheddar. You don't need anything more for a great burger, but the standard condiments — tomatoes, lettuce, pickles, grilled and raw onions, ketchup and mustard — are available as free add-ons. And while you have to pay for them, the fries are perfection, too. Juicy Burgers & Dogs has since changed ownership and moved several doors down in the same Englewood shopping center.

2013
Highland Tap & Burger
2219 West 32nd Avenue
720-287-4493
Even in this era of carbonated mojito spheres, caviar bubbles and beet cheesecake, the hamburger remains America's favorite food, and burger fans — of which you are undoubtedly one — are insanely opinionated about what the consummate burger should look and taste like. Highland Tap & Burger gets to the meat of the matter, serving its plump, char-grilled patties every which way: from classically naked to blanketed with cheese to whimsically fancified with feather-light shavings of foie gras. The beef, all Angus and 100 percent natural, is judiciously seasoned, cooked to temperature (if you want your beef to be bloody-red squish, the kitchen is happy to oblige), and the buns — white, whole wheat or gluten-free — are soft but sturdy. Tear into it, make a mess, and dribble 'til the cows come home. Highland Tap & Burger has since made it a double, opening Sloan's Lake Tap & Burger at 1565 Raleigh Street in 2016. 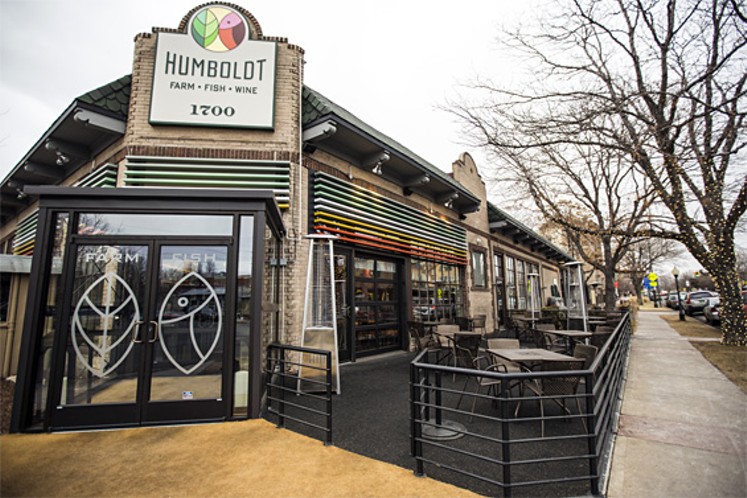 Humboldt still makes a mean bacon burger.
Danielle Lirette
2014
Humboldt
1700 Humboldt Street
303-813-1700
Burgers are like pizza: Everyone has a favorite style. Some people go old-style, with beef, lettuce, tomato and mayo. Others veer toward the more-is-better camp, with truffles, pork belly and crispy chicken skin. Humboldt's burger falls in between — not too simple, but not over the top...and all good. Made with grass-fed Colorado beef, the patty is studded with bacon so that you get bacon in every bite, a good alternative to those messy bacon strips that slide around and slip out of a bun. Topped with Tillamook cheddar and onion jam, and sandwiched between puffs of buttery brioche, the burger is smoky, sweet and satisfying, making it a great non-fishy choice at this seafood-savvy restaurant.

2015
Jimmy's Urban Grill
1530 Blake Street
Jimmy's has the kind of menu that makes you think either "hell, yes" or "hot mess." A little too ambitious for straight-up bar-food fans and with an international streak that could spell disaster, Jimmy's somehow manages to keep it all together and put out clever yet satisfying twists on drinking fare. Chicago is a big influence here, which is readily apparent in the name and ingredients of the Ditka burger. An eight-ounce slab of properly fat-laced and fresh ground chuck comes topped with Jimmy's own Italian beef, adding meaty succulence to the already juicy burger. Pungent provolone and your choice of sweet peppers or hot giardiniera (we recommend the latter) add tang and spice. Despite the meat-on-meat combo, the Ditka burger is not a towering monstrosity but rather an exercise in (relative) restraint. The sandwich comes with a steak knife to make handling easier, and things can get a little drippy, but the bun maintains its integrity for bite after satisfying bite. Jimmy's Urban Grill closed in 2016. 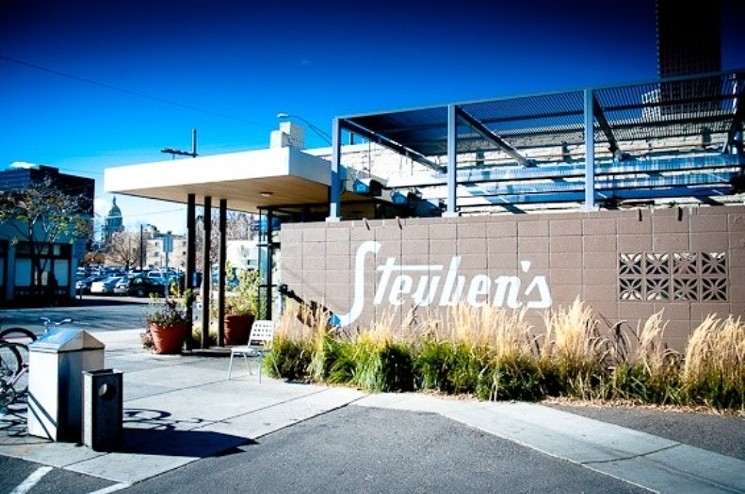 Steuben's burger is an American classic.
Westword file photo
2016
Steuben's Uptown
523 East 17th Avenue
303-830-1001
Teetering mounds of audacious ingredients may capture the attention of some burger thrill-seekers, but a mastery of the basics is still required. Steuben's forgoes fanciful fabrications and instead sticks with regional tradition in its green-chile cheeseburger. A juicy six-ounce patty gets crowned with good old American cheese and a mound of pure diced chiles that glow with the warm desert heat of the Southwest. A cushy challah bun and the standard trappings (lettuce, onion, tomato — you've known the drill since you were old enough to grip a burger with two hands) help bring it all together, flooding your mind with the memories of every great burger you've ever had. Trends come and go, but perfect execution wins every time.

2017
Cochino Taco
3495 South Downing Street, Englewood
720-573-6174
Taco Tuesday is a legitimate draw at many bars around town, Mexican or otherwise. But Cochino Taco throws a wrench into the Taco Tuesday machine by making one of its burgers a special that day. Owner Johnny Ballen, who's also a partner in the Squeaky Bean downtown, designed this gut buster that features a ladleful of queso, poblano chiles, fried jalapeño shards and a pile of "lettuce fluff" — Ballen's catchphrase for the fine-shredded iceberg found on diner burgers across the country. A six-ounce patty gets a simple griddling on the flat-top, and then the whole mess is presented with a haystack of kennebec fries. With something this good on the menu, we're wondering why Ballen didn't name his Englewood joint Cochino Burger. Cochino's burger now comes with tots instead of fries, but otherwise maintains the same sloppy goodness as ever. Is a patty melt still a burger? We think so.
Mark Antonation
2018
The Royal
4000 Tennyson Street
303-862-9394
Denver's best hamburger isn't a hamburger; it's a patty melt. We know that's just splitting hairs: The difference is really only in the bread. Because otherwise, the Jalapeño Mojo Melt at the Royal checks all the right boxes for a delicious burger — juicy, gooey, spicy, beefy and messy — while adding crunch and flavor with grilled marble rye bread. Mojo sauce, cream cheese aioli and grilled peppers and onions are piled on with abandon, but the just-pink patty is still the star. You can find other melts at this Berkeley burger bar, too, or stick with a plain-Jane bun for something a little more standard.