Winter seasonal drinks can be iced, too. C'mon, this is Colorado! Sonder Coffee & Tea
In Colorado, we experience the changing seasons on a daily basis. One day the weather warrants a warm latte, the next, iced. Whichever your preference, here are seasonal lattes at local coffee shops that are full of holiday cheer — but without the liquor. Give your liver and brain a rest while you celebrate the season and sip on these cozy beverages. (’Tis the holiday season, so we recommend calling ahead to find out when these cafes are open over the next two weeks.)

The Irish Mule at Doppio looks and sounds like a cocktail, but it's not.
Doppio Coffee
Doppio Coffee
1245 East Colfax Avenue
303-537-7794
Our Christmas cheer-filled hearts are torn between the brown sugar maple latte or the Irish Mule as favorites at Doppio. The Irish Mule is a cross between two notoriously boozy mixed drinks: Irish coffee and a Moscow Mule, except Doppio's version comes sans alcohol. Instead, it's a mix of ginger beer, espresso and almond milk, for just the right amount of kick and creamy sweetnessl it's so good you'll forget that your bartender's actually a barista. On the other hand, the brown sugar maple latte is filled with homemade syrups and classic flavors that call to mind Buddy the Elf. 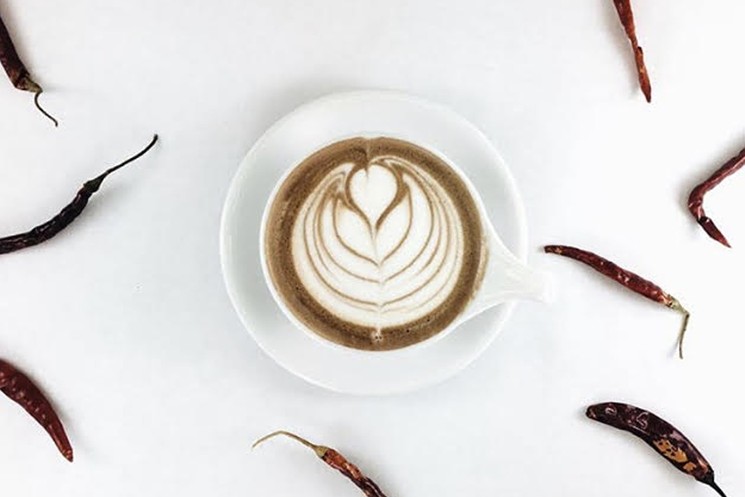 The Holy Mole is sugar and spice...and spicy.
Spur Coffee
Spur Coffee
95 Lincoln Street, 303-309-0147
5624 South Prince Street, 303-309-0147
The menu at Spur tends to be more savory than sweet, so it makes sense that the cafe's best seasonal drink is a spicy version of a mocha called the Holy Mole. Made with homemade smoked chipotle chiles, cayenne pepper, chocolate, cinnamon and, of course, espresso, this drink warms you up in more ways than one.

The Old Man Marley at Sapor spreads holiday cheer, even if the character it's named after doesn't.
Sapor Coffee & Concepts
Sapor Coffee & Concepts
2795 Speer Boulevard
Sapor's winter menu features drinks all named after characters in the Christmas classic Home Alone. You can sip on a Kevin McAllister, Old Man Marley or Gus Polinski while dreaming up ways to spread good cheer. While the last is Sapor's most popular, made with Sweet Bloom Hometown espresso and Royal Crest eggnog, our favorite is the Old Man Marley: a salted peppermint mocha that's the right amount of salty and sweet — just like the old man himself.