Race to These Ten Spots for Derby Day 2022 Have a blast this Derby Day at Union Station. Union Station
Churchill Downs may be a long way from Denver, but the Mile High still knows how to celebrate Derby Day. On Saturday, May 7, don your biggest, most outrageous hat and get in on the fun for the 148th renewal of the greatest two minutes in sports. From mint juleps to costume contests to live music, these ten hot spots are going all out. The actual race might be over quickly, but the lively parties will go on for hours, both before and after the main event. 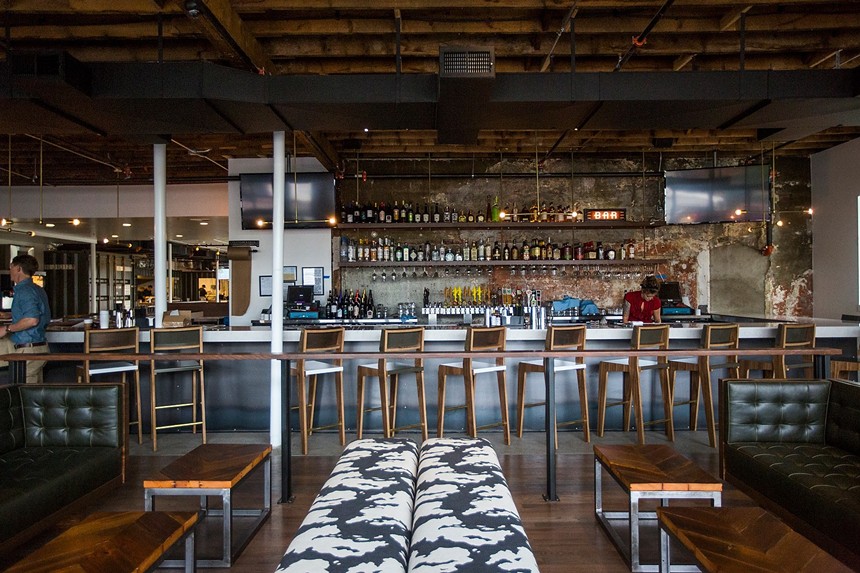 Avanti Denver will have a Best Dressed contest.
Danielle Lirette
Avanti Food & Beverage
3200 Pecos Street
720-269-4778
Gear up in derby attire and enter the Best Dressed costume contest at Avanti Denver's 7th Annual Derby Day Party. The fun runs from noon to 5 p.m. and is a free, no-reservations-required event. Aside from the contest, there will be a DJ, photo booth and tons of specials from the vendors in the food hall. Bonus: A portion of the proceeds will go toward the Interscholastic Equestrian Association.

TheBigWonderful at Belleview Station
6785 East Chenango Avenue
TheBigWonderful's epic derby party from 4 to 8 p.m. includes live music from Pick & Howl at 4 p.m. and Trout Steak Revival at 6 p.m. Pick up a meal or snack from one of the many food trucks parked along the fete, and enjoy drinks from the beer garden. Buy tickets in advance for $35 via Eventbrite, or get one at the door for $40. For an extra $20, get access to Beer Fest, which is right next door in the dog park and includes endless pours of local beers. This party kicks off a season of fun at Belleview Station, so stay tuned for more events.

The Brown Place Hotel and Spa
321 17th Street
303-297-3111
Get fancy for Derby Day at the Brown Palace. Tickets run $100 per person and include Derby-inspired food, cocktails, live music by Hazel Miller and the Collective and, of course, the chance to watch the race on the big screen. Attendees can enter contests for Best Dressed, Best Dressed Couple and Best Hat. There's also a VIP ticket for $250, which includes all the above as well as access to the Speakeasy Pegasus Club, the after-party, and entry to see the Jennifer Lane Trio perform. The party starts at 1 p.m. and runs until 5:30 p.m. for general admission and until 10 p.m. for VIPs. Purchase tickets via Eventbrite. 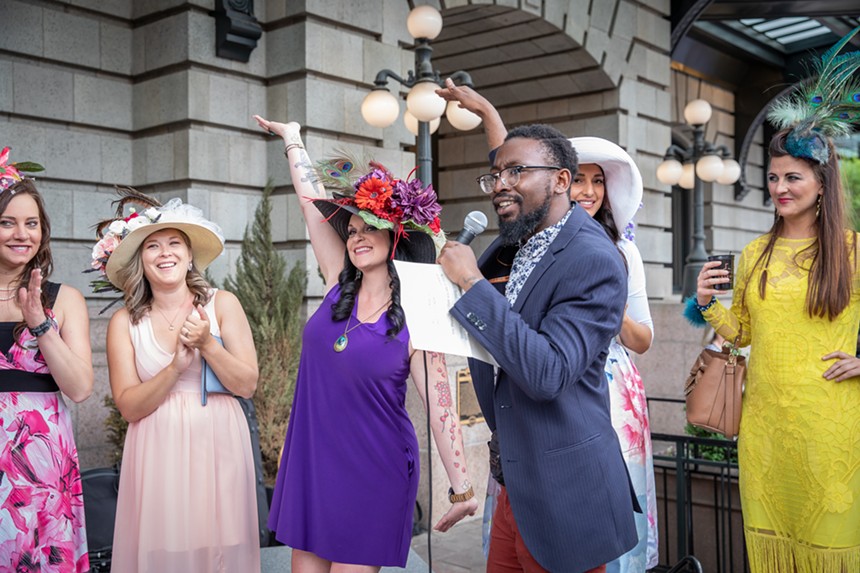 Party on Derby Day at Union Station.
Union Station
Denver's Union Station
1701 Wynkoop Street
303-592-6712
Celebrate the most exciting two minutes in sports at Denver’s iconic train station with a full day of themed events. We're talking bottomless mimosas and an upscale, Southern-inspired pre-race brunch at the Cooper Lounge from 11 a.m. to 2 p.m. Tickets are $75 and available via Tock. Next, mosey over to the Terminal Bar, where, from noon to 4:30 p.m., guests can partake in mint juleps and frosé while kicking back to tunes by the Royal Street Ramblers. Yes, there will also be a costume contest, and both the contest and the live music are free. Of course, seeing the action is the best part, and with two massive screens inside the Great Hall, it's easy to get a good view of the main event.

FlyteCo Brewing
4499 West 38th Avenue
720-772-7319
While we aren't sure what beer goes best with big hats and horses, there are plenty of opportunities to figure it out with the long list of suds crafted by this Berkeley brewery. Plus, from 2 to 7 p.m., there will be live music by the Foothills, access to the game Across the Board Horse Racing, and prizes for the best-dressed party-goer. No reservations or tickets needed — just show up, root for your favorite horse and toast with a pint or two.
click to enlarge 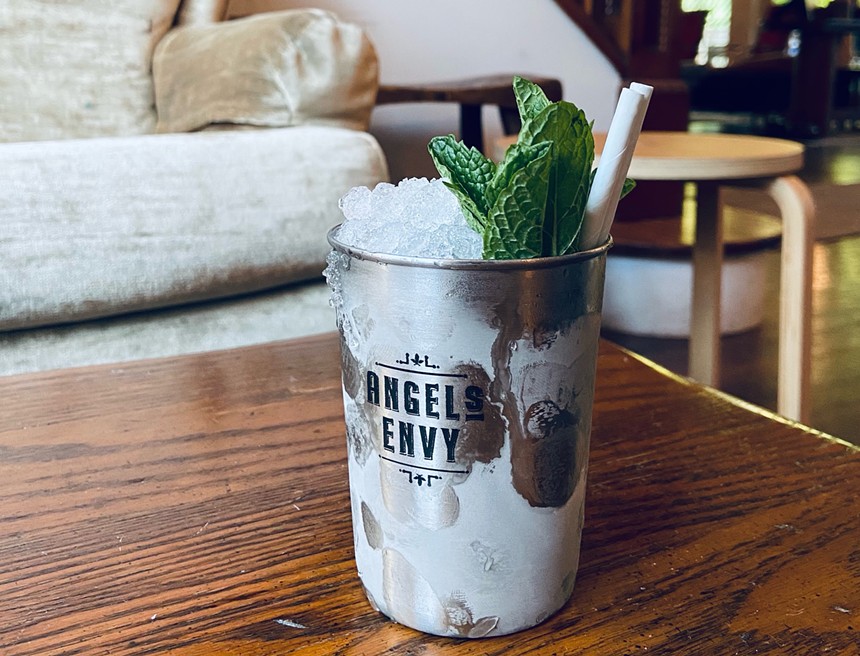 Four Seasons Hotel
1111 14th Street
303-389-3050
Spending $180 on Four Seasons Hotel's epic Derby Day party proves much cheaper than going to Churchill Downs to see the races live. Upon arrival, enjoy an Angel's Envy Mint Julep cocktail followed by tasty appetizers and tunes from DJ Sasha. From 2 to 6 p.m., the action will take place on the third-floor pool rooftop. Representatives from Angel's Envy will be on hand to give out prizes and help create a picture-perfect Derby Day for all the attendees. Buy tickets now via Eventbrite.
click to enlarge 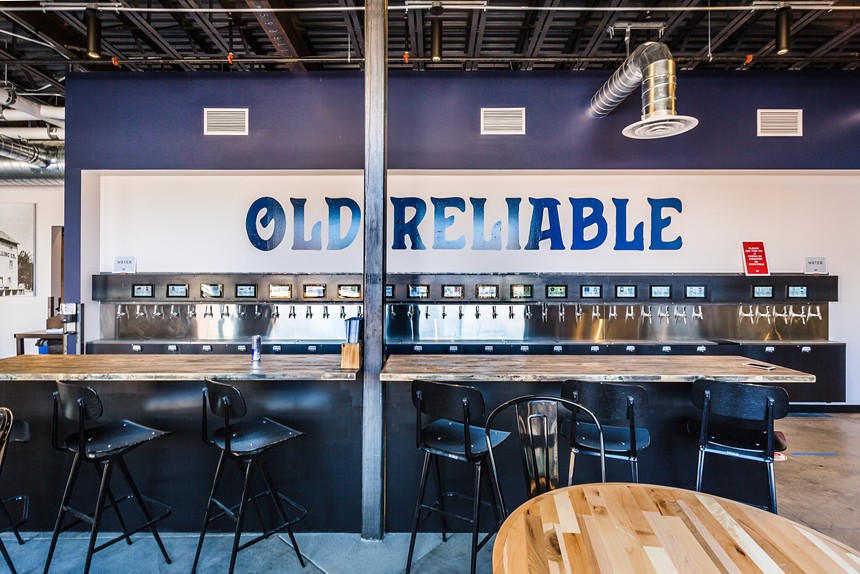 The Golden Mill
1012 Ford Street, Golden
720-405-6455
Gallop to Golden for a lively derby party. There will be Tincup whiskey cocktails and swag along with Derby Day prizes and live music from the bluegrass band Burn It Blue from 1:30 to 4:30 p.m. Watch the race on the large televisions scattered throughout the space; the party runs from 3 to 5 p.m., and even when the horse race ends, guests are welcome to stay as long as they want to eat and drink the night away. 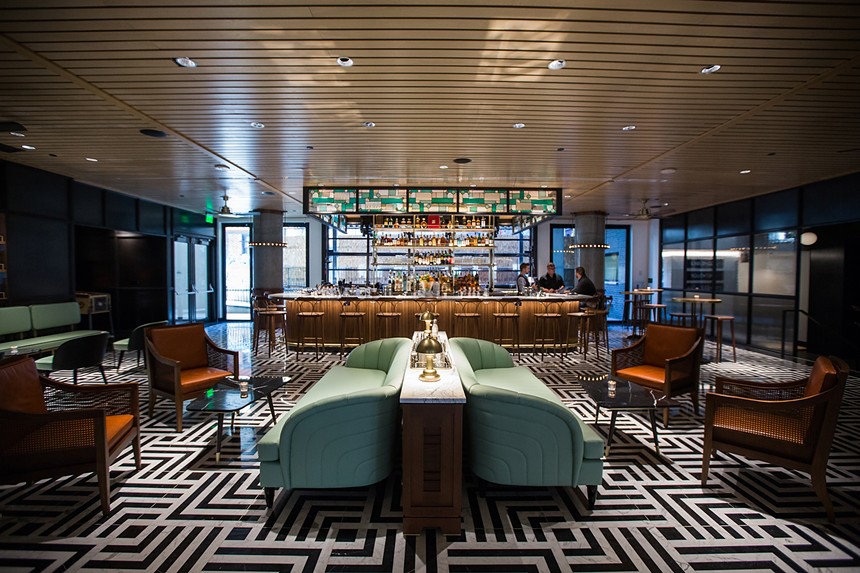 Enjoy the glam mint-green accents and mint julep bar at Poka Lola.
Danielle Lirette
Poka Lola Social Club
1850 Wazee Street
720-460-2728
Aside from horses, the Kentucky Derby is all about bourbon. Head downtown to sip on expertly crafted Derby-themed cocktails, including the famous mint julep as well as some creative options, all made with Woodford Reserve bourbon. The party begins at 1 p.m. with live music. Bonus: If you dress to the nines in Derby attire, you'll be entered to win a one-night stay at the Maven Hotel, directly above Poka Lola Social Club.

Stanley Beer Hall at Stanley Marketplace
2501 Dallas Street
720-749-5098
With plenty of television sets situated about the beer hall, you won't miss those action-filled minutes as the horses race for glory during the Kentucky Derby. Mint juleps will be on tap all day, and guests can fill their own cups any time they want from the automated system, which also features beer and wine on tap. Kids are welcome, too, and with a large outdoor space to run and play in, they could have their own race while the adults cheer on the sidelines. The doors open at 11 a.m. and close at 10 p.m. 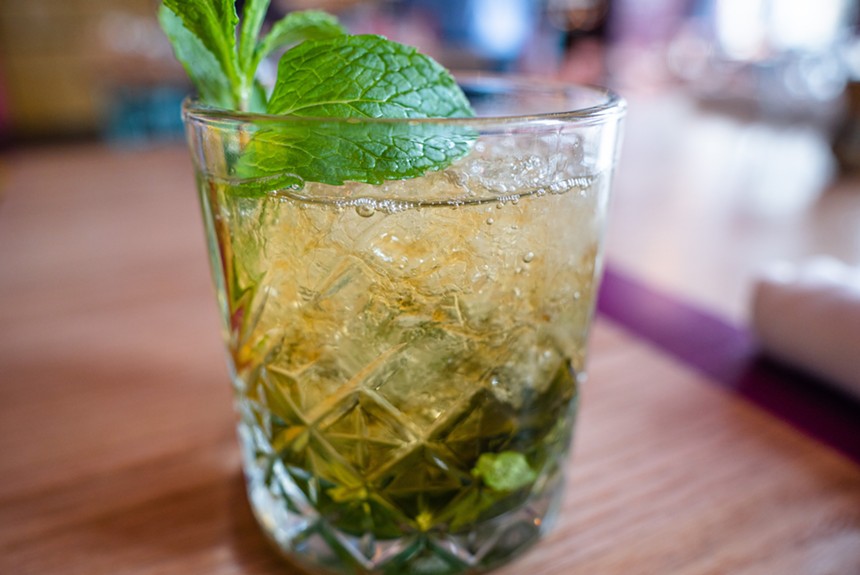 Three Saints Revival
1801 Wewatta Street
720-707-3500
For $10, indulge in one of the best mint julep cocktails in the city. Made with Elijah Craig small-batch bourbon, fresh mint and handcrafted simple syrup, this elegant drink is is a Derby Day must. The Three Saints happy hour menu, which includes choose-your-own charcuterie board options, lamb meatballs, sweet pea crostini and more sharable plates, will also be available from 2:30 to 5:30 p.m.
KEEP WESTWORD FREE... Since we started Westword, it has been defined as the free, independent voice of Denver, and we'd like to keep it that way. With local media under siege, it's more important than ever for us to rally support behind funding our local journalism. You can help by participating in our "I Support" program, allowing us to keep offering readers access to our incisive coverage of local news, food and culture with no paywalls.
Make a one-time donation today for as little as $1.