Get Your Nog On With Dry Land Distillers' Nog Off Holidays are a time for comfort and nostalgia — and maybe a little tipsiness. Eggnog fits all of those, from Thanksgiving through New Year's Day. Dry Land Distillers co-founder Nels Wroe loves the classic winter tradition, which is why the Longmont distillery is hosting its third annual Nog Off beginning Tuesday, November 25.

"We found out that all of the founders were competitive about their eggnog, and we all felt our eggnog recipes were better than the other," says Wroe, who started making rum at the distillery just to add to the eggnog. "It's kind of ridiculous how we created rum, but that's why."

During the first Nog Off, the competition was held between the owners and bartenders at Dry Land, and, says Wroe, it was wildly successful. So in 2019 they invited local chefs to participate, too. Wroe won the inaugural event, and last year his employee Kelly Dressman took home the crown (she's still waiting for her tiara, adds Wroe). This year the two champions will defend their eggnog honor against Amanda Adare, owner of Table Mountain Farm in Boulder; Sean Gafner and Matt Grimes of Jefes Tacos and Tequila in Longmont; DJ Reimer, bar manager of 24 Carrot Bistro in Erie; and Sarah Morgan, owner of Martini’s Bistro in Longmont. Six competitors will face off to see who can make the best eggnog.
Dry Land Distillers

Traditional eggnog is made with fresh, unpasteurized eggs, heavy cream, spices and vanilla. The booze portion depends on what part of the country it's made in, but it's often whiskey or rum, or a combo of the two. The original eggnogs weren't sweetened with sugar, but they were heavy on fat. These days, eggnog is, in essence, dessert in a cup.

"A real eggnog, in my opinion — and there are a lot of opinions — is built around really fresh heavy cream, a little bit of sugar to round out the flavors, and a spirit that's appropriate to where you are from," says Wroe, who has chosen Longmont Dairy for all the eggs and cream that go into the eggnogs, which the distillery provides for the chefs along with the booze. "Here in Colorado, we don't have a traditional eggnog to call our own."

Yet by holding this annual competition, Wroe has inadvertently aimed to change that, though a regional preference has yet to be determined. "It hits this fun spot for people during the holidays," says Wroe. "We also found that a lot of people haven’t had real eggnog before; they're used to the store-bought, prefab stuff." 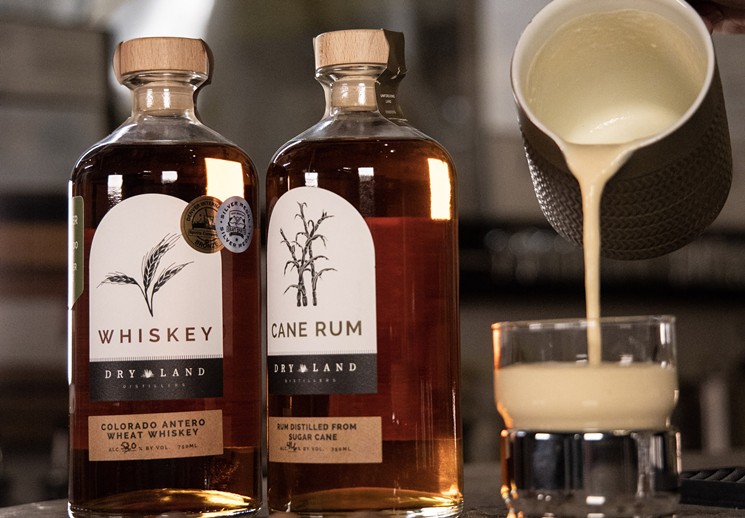 Since a big gathering for the contest is not possible this year because of the pandemic, instead of sampling in the tasting room, the eggnogs will be doled out for takeout over the next four weeks starting this Wednesday. Guests can pick up their eggnog Wednesday or Thursday (except this week, since it's Thanksgiving) from 11 a.m. to 5 p.m., or on Friday or Saturday from 11 a.m. to 9 p.m. at the distillery's alley entrance at 471 Main Street in Longmont.

Guests can help dictate the winning nog by voting. It's also a good way to taste how different chefs in and around Longmont think about food and drink. Last year, says Wroe, one chef made a vegan eggnog that tasted as good as the dairy-filled stuff.

The first three weeks will pit two of the competitors noggin to noggin, starting with the Dry Land team. During the final week, guests will get a taste of all six to compare and then cast their final votes. The cost is $79 if you want to drink all six entries, and spaces are limited to fifty customers, says Wroe. For those who wish to just sample week by week, there will be individual servings available to purchase.

Dry Land Distillers is in the process of moving to a new location, at 519 Main Street, a historic dairy building just a few doors down from the original distillery. There will be a socially distanced holiday open house on November 27 and 28 from noon to 7 p.m. to introduce guests to the new space, which will open next spring with a production facility and cocktail lounge. You'll be able to grab some eggnog at the open house, too. Reservations are strongly recommended, since only one group at a time will be allowed in the building; visit the distillery's website to make a reservation for the Dry Land Pre-Build Open House.
KEEP WESTWORD FREE... Since we started Westword, it has been defined as the free, independent voice of Denver, and we'd like to keep it that way. With local media under siege, it's more important than ever for us to rally support behind funding our local journalism. You can help by participating in our "I Support" program, allowing us to keep offering readers access to our incisive coverage of local news, food and culture with no paywalls.
Make a one-time donation today for as little as $1.