Eight Perfect Fall Beers to Kick Off the Season

New Terrain Brewing
"Life starts all over again when it gets crisp in the fall." Those words from The Great Gatsby are both ironic and true. And they take on a whole new meaning when it comes to beer. The season officially began on September 22, but there are already dozens, if not hundreds of pumpkin beers in taprooms and shelves around Colorado — and an even higher number of Oktoberfest-style lagers. And while we could have filled this list entirely with those two styles, we decided to round it out with a few other treasures, including the flavors of spices and late-summer harvests of fresh hops and peaches that are evocative of autumn earth tones.

WeldWerks Brewing
Smoke & Peaches
WeldWerks Brewing
There's been smoke in the air recently at a few Colorado breweries, including Dry Dock, Bierstadt, Denver Beer Co., Westfax and Our Mutual Friend. The latest to give smoked lagers (usually called rauchbiers) a go is WeldWerks, which created Smoke & Pineapples in August and followed up with Smoke & Peaches in late September. Brewed with smoked Western Slope peaches and smoked malt, the 6 percent ABV beer combines those late-harvest peach flavors with campfires in the crisp air. It is on draft and available to go from the brewery and should hit WeldWerks' distribution area later this week.

New Terrain Brewing
Punky Masala
New Terrain Brewing
New Terrain brings back its atypical pumpkin beer, Punky Masala. "Our recipe uses savory Indian spices similar to those used in Garam Masala soup to elevate the pumpkin," the brewery says. "The result is a beer with a pleasing profile boasting notes of cardamom, cumin, clove, cinnamon and pumpkin. Punky Masala is not a trick. It is very much so a treat." And it's on draft and in four-packs to go.

Dry Dock Brewing
Floatin' on the Freshies
Dry Dock Brewing
Although hops are usually harvested in late August or early September, their appearance heralds fresh hop beer season and the beginning of the end of summer. Fresh hop beers are made with whole-cone hops that are picked and then used within 24 hours so as to capture their more vegetal flavors. Dry Dock's entry into that category this year, Floatin' on the Freshies, is no exception: The brewery used Chinook, Cascade and Nugget hops harvested just hours earlier at Highwire Hops in Paonia. The 7.1 percent ABV beer "delivers notes of honeysuckle, red grapefruit, pine, berries, stone fruit and mint over a base of honey and toasty malts," Dry Dock says. It is available on tap at the brewery's South Dock location.

Station 26 Brewing
Patch to Porch Pumpkin Lager
Station 26 Brewing
Most pumpkin beers are ales — something that seems appropriate since their heaviness can go with the season. But Station 26 has turned that around, creating a crisp, pumpkin pie-spiced lager that works as both an easy crusher and a fall treat. Brewed with allspice and vanilla, the 6.2 percent ABV beer is available now on draft and in four-packs of 16-ounce cans to-go. Plus it has a fun name.

Uhl's Brewing
Maple Harvest
Uhl's Brewing
For this sturdy glass of autumn, Uhl's starts with a 13.4 percent ABV American strong ale and then doubles down on the caramel maltiness by adding maple syrup and molasses to the brew. Then it throws in some pumpkin spices and vanilla to "brighten the nose," the brewery says. "Earthy squash also contributes to the full-bodied mouthfeel, and it finishes with just a touch of boozy heat."

4 Noses Brewing
Foeder Oktoberfest
4 Noses Brewing
There are literally (figuratively) five billion Oktoberfest lagers out there right now, so how did we pick this one for a list? Well, after being brewed, it is aged in a wooden foeder, which is sort of like a cozy sweater for beer — at least that's how we're imagining it. Plus, 4 Noses always does a good job with its annual Marzen. You can get it on draft or in canned four-packs to go, along with the brewery's non-foeder version. 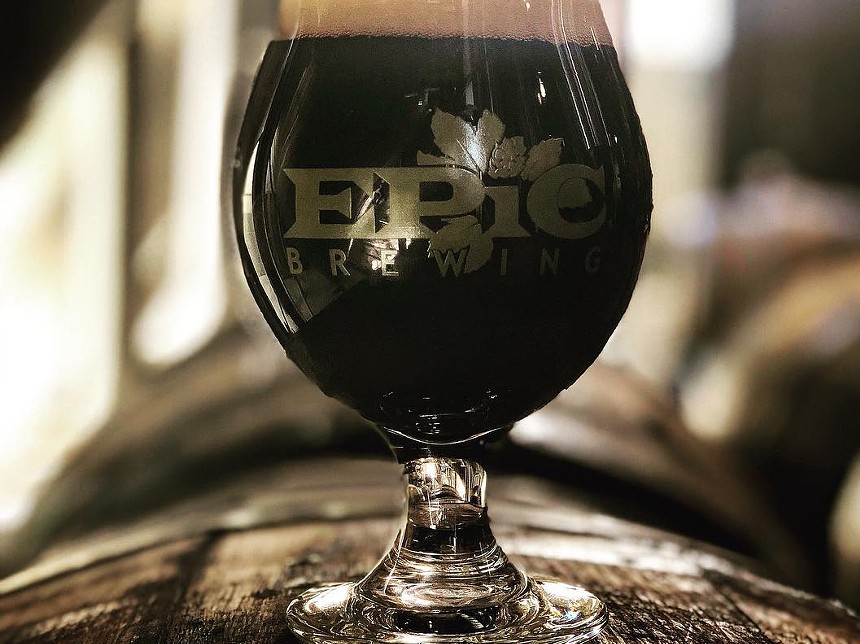 Epic Brewing
Big Bad Baptist: In the Rye
Epic Brewing
Big Bad Baptist is a classic: a bourbon-barrel-aged stout with coffee that has been clearing heads for many years. But Epic Brewing adds new variants to the base beer every year, and this time around, it aged one version entirely in rye whiskey barrels instead of bourbon. Rye typically imparts deep earthy tones and some peppery spice. Drink it from a coffee mug on a cold morning afternoon.
KEEP WESTWORD FREE... Since we started Westword, it has been defined as the free, independent voice of Denver, and we'd like to keep it that way. With local media under siege, it's more important than ever for us to rally support behind funding our local journalism. You can help by participating in our "I Support" program, allowing us to keep offering readers access to our incisive coverage of local news, food and culture with no paywalls.
Make a one-time donation today for as little as $1.