How to Make Khachapuri — One of the World's Most Craveable Dishes

The Georgian specialty called khachapuri. Mark Antonation
This summer, I embarked on a mission to find khachapuri, which is practically the national dish of the Eurasian country of Georgia. I never did find what I was looking for in Denver; the canoe-shaped buns filled with bubbly cheese, butter and eggs are as common as pizza in that nation, and while they've also gained a following in Russia and a few larger U.S. cities, they have yet to catch on in Colorado.

There are several styles of khachapuri in Georgia, some that resemble flaky turnovers with goat cheese on the inside, others that are similar to a cheese calzone, but the most eye-catching is the adjaruli khachapuri, which holds a molten lake of tangy cheese and butter and a sunny egg yolk within the curved walls of crusty, puffy bread dough. Unable to locate this style in a Denver restaurant, I resolved to make it myself at home.

I wasn't the only one obsessed with khachapuri, as it turns out. Dan Baker III, the test-kitchen development manager for Savory Spice, the Denver-based seasoning company with several retail shops in metro Denver, also had Georgia on his mind.

Khachapuri formed and ready to go into the oven.
Mark Antonation
"We got an email from a lady who had been to Georgia who was wondering if we had any Georgian spices or blends," Baker explains. He began researching recipes from the region and discovered khmeli suneli, a blend of herbs and spices comparable to Indian garam masala or North African ras al hanout (both of which Savory Spice makes). While many of the ingredients in khmeli suneli aren't typically found in American spice cabinets (unless you happen to have blue fenugreek or dried marigold blossoms in your pantry), Baker noticed that most recipes included marjoram, a notable herb in Eastern European and Central Asian cuisine that Savory sells.

While digging into ways to use marjoram, Baker came across khachapuri and decided to create a marjoram-spiked version, understanding that the oregano-like herb is often used to add flavor to the cheesy Georgian dish. 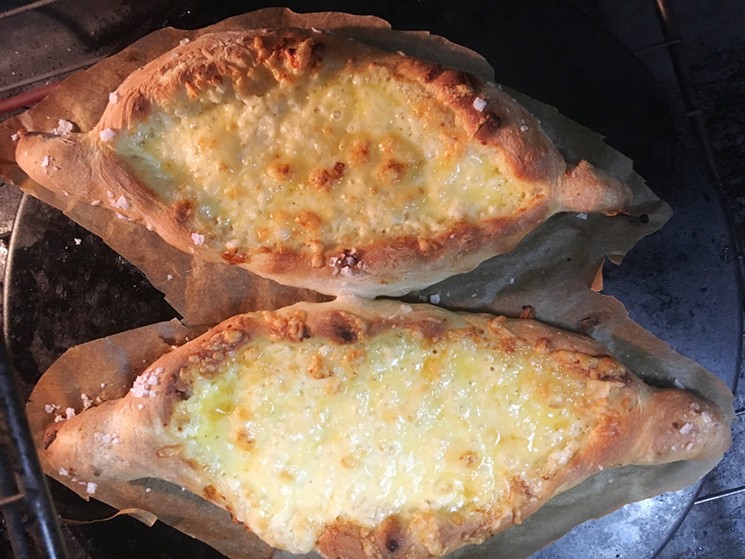 Khachapuri right out of the oven, before eggs are added. You could eat it just like this if eggs aren't your thing.
Mark Antonation
But first he needed to come up with a dough. After a few test bakes from recipes he found online, the chef decided that they were all too doughy, so he fell back on a basic dough recipe and tinkered with it until he found the right consistency. While many traditional recipes are rich doughs fortified with butter, milk and eggs, Baker's is a simple mix of flour, water, salt and yeast, with just enough sugar to kick-start the yeast. The fillings for khachapuri are rich and heavy enough without the addition of fat to the dough.

Sulguni, the Georgian cheese typically used in khachapuri, is also hard to find in Denver. Baker tried a few blends before settling on a combination of mozzarella, muenster and feta to get just the right level of tangy, creamy and salty. Here's the Savory Spice khachapuri recipe, which gave me a great finished product:

For dough: In the bowl of a stand mixer, combine warm water, yeast and sugar. Let sit for five minutes to allow yeast to activate. Add flour, salt and marjoram and mix on medium-low speed until a smooth, wet dough forms. Transfer dough to a clean greased bowl, cover, and let rise until doubled in size, about one hour. Once risen, turn dough out onto a lightly floured surface and divide into four equal portions. Place each piece of dough onto a piece of lightly floured parchment paper. Gently shape each portion into large ovals, about eight inches wide and ten inches long. 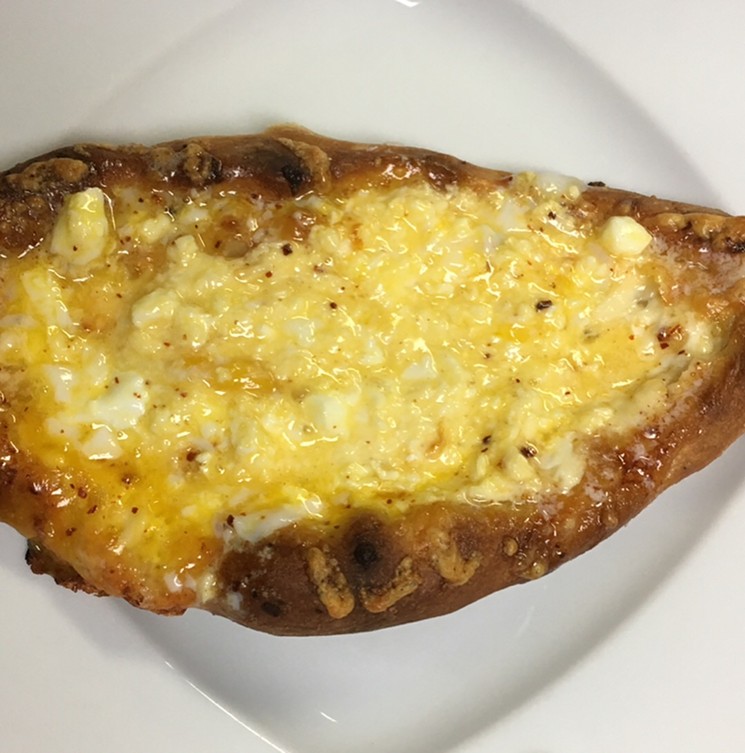 Mix the butter, eggs and cheese together with a fork before eating.
Mark Antonation
For filling: Place a pizza stone or heavy baking sheet into the oven and preheat to 500 degrees. Combine mozzarella, muenster, feta and marjoram. Pile a quarter of the mixture across each of the four ovals. Fold dough edges up over the cheese to form a border, about two inches wide all the way around. Twist ends once to form small “handles.” At this point, the uncooked khachapuri should resemble boats. Let them rise for 15 more minutes. Meanwhile, whisk one of the eggs in a small bowl. Trim the parchment paper to just larger than the khachapuri. Gently move the “boats” with parchment onto the pizza stone or baking sheet. (You may have to bake the khachapuri in batches depending on the size of your stone.) Brush the edges of each one with beaten egg and bake for 12 to 14 minutes, or until the dough is lightly golden. Crack one egg into the filling of each of the khachapuri and bake for two to three more minutes, just until the white of the egg is no longer translucent. Top each one with about a half tablespoon of cubed butter and a sprinkle of Urfa chile. Serve immediately. 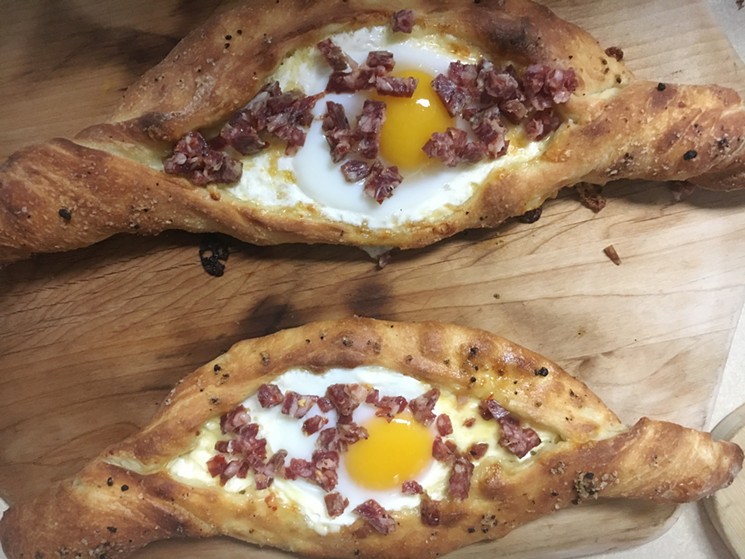 Khachapuri with diced salami from Il Porcellino added after cooking.
Mark Antonation
Baker's recipe results in a very wet, sticky dough, which is why he recommends forming the khachapuri on parchment paper before moving them into the oven. I built mine on parchment paper on a wooden pizza peel and then slid them onto a preheated pizza stone in the oven. I also used a blend of Wisconsin butterkase and feta cheese from Colorado's Jumpin' Good Goat Dairy, which yielded a great result.

I only cooked two khachapuri the first night, and then refrigerated the dough and cooked the rest two nights later. The extra time allowed the dough to develop a little more flavor, so if you have time to make it in advance, the result is worth the wait. You can also experiment with various herbs and meats (I used a small amount of finely diced salami from Il Porcellino) as toppings, but keep it light: Khachapuri isn't pizza and should be all about the almost fondue-like filling that you get from mixing the just-cooked egg into the butter and molten cheese with a fork.

Now it's your turn to follow your own khachapuri obsession.
KEEP WESTWORD FREE... Since we started Westword, it has been defined as the free, independent voice of Denver, and we'd like to keep it that way. With local media under siege, it's more important than ever for us to rally support behind funding our local journalism. You can help by participating in our "I Support" program, allowing us to keep offering readers access to our incisive coverage of local news, food and culture with no paywalls.
Make a one-time donation today for as little as $1.