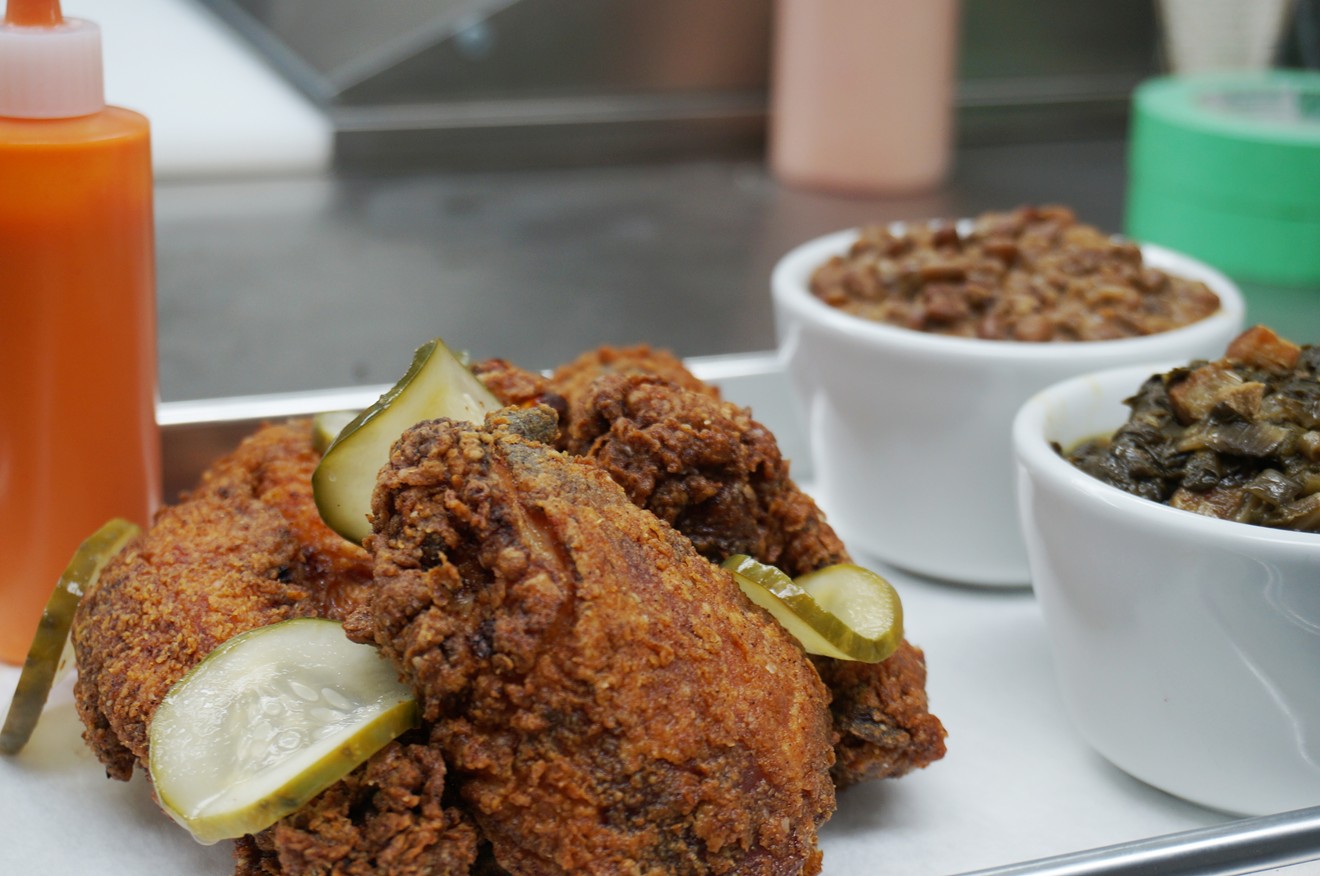 Grind Kitchen + Watering Hole in Cherry Creek has shuttered. Mark Antonation
One year ago, we checked in with Grind Kitchen + Watering Hole at 300 Fillmore Street; at the time, chef and co-owner Preston Phillips said business was picking up at the Cherry Creek restaurant that specialized in Southern-inspired fare, including fried chicken, which was our pick for the best in the city in 2017.

But now Grind is closed. "We want to thank all our wonderful guests and our great staff we've had over the last 6 years but due to our building being sold and knocked down, we have closed our doors in Cherry Creek," writes Preston's mom, Janeen Phillips, in an email announcing the news.

Fans of Grind's fried chicken may no longer be able to get that specific fix, but there are options — and not just hot chicken, though that take on the bird is trending. In 2021, Fort Collins's Music City Hot Chicken debuted a Denver outpost at TRVE Brewing; the city also has two locations of Dave's Hot Chicken, and Blazing Bird, with locations in Arvada and Englewood, is planning to open a third in downtown Denver soon.

For the straight-up comfort of bone-in fried chicken without the heat, though, here's where we go: 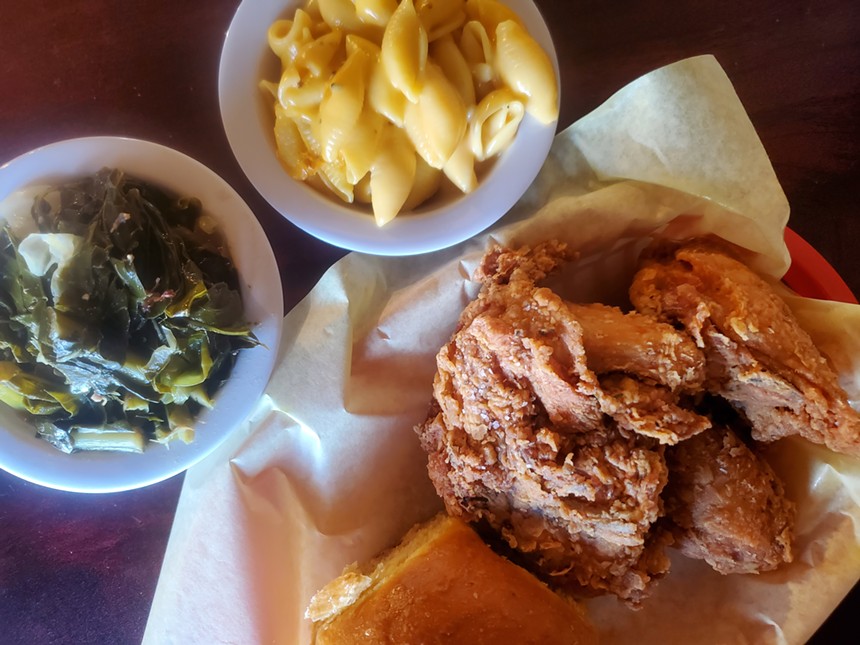 Southern-style fried chicken and sides at the Blazing Chicken Shack II.
Molly Martin
The Blazing Chicken Shack II
5560 East 33rd Avenue
720-596-4501
This soul-food spot is a hidden gem tucked a block off Martin Luther King Jr. Boulevard. The outside may not look particularly welcoming, with its caged-in windows and barred door, but you’ll find a comforting vibe inside, along with a menu full of homestyle Southern classics including gumbo, catfish, hot links and, yes, homestyle fried chicken paired with sides like mac and cheese and collard greens studded with shredded ham hock and bolstered with cabbage. 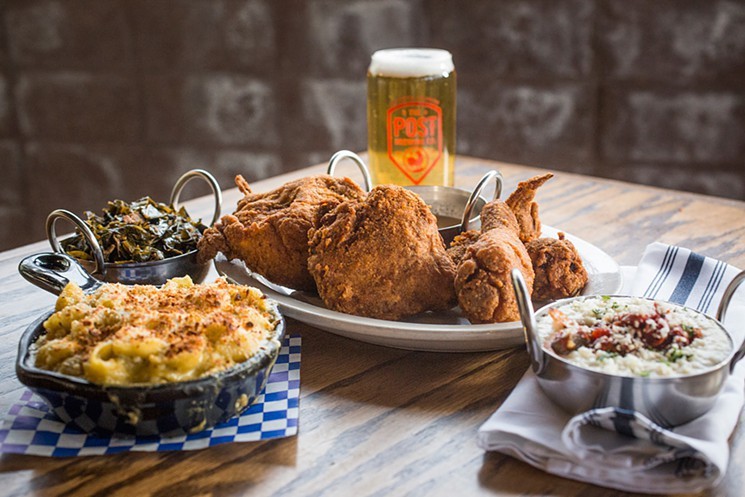 The Post's fried chicken is gluten-free.
Courtesy of the Post
The Post Chicken & Beer
Multiple locations
With six locations and a seventh slated to open in the former Lola in LoHi, restaurateur Dave Query's flock of chicken shacks consistently fries up the best bird on the Front Range — and was our pick for the best fried chicken in 2021. Chef Brett Smith came up with a mouth-watering recipe for the dredge back in 2014, when the first Post opened in Lafayette — and it's gluten-free, in large part to achieve the loudest crunch for the buck, but also to ensure that as many folks as possible can enjoy the delicious bird. Every meal at the Post feels like a family picnic, with great chicken, stellar sides and plenty of cold beer, including Top Rope lager and several other great brews made by the Post Brewing Company. 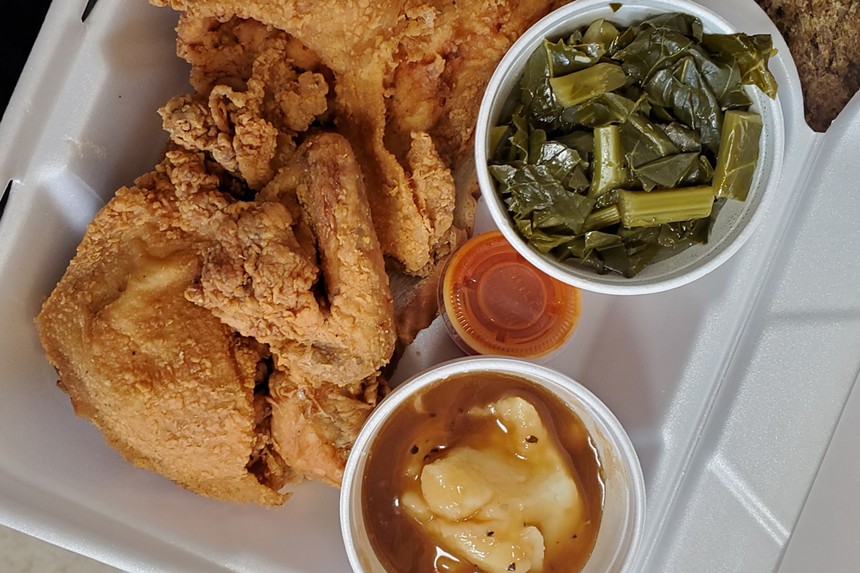 Whether dining in or taking it to go, Welton Street Cafe's fried chicken is a Denver classic.
Molly Martin
Welton Street Cafe
2736 Welton Street
303-296-6601
With the recent news that Welton Street will close on March 12 after 22 years at its current location, we're craving its classic fried chicken more than ever. This Five Points soul-food staple is fighting for a comeback, though. With plans to move to another space a block away, the Dickerson family, who have owned the restaurant since 1986, have launched a GoFundMe page to help cover the costs of renovations. While the hope is to be able to reopen at 2883 Welton Street by summer, now is the time to visit — frequently — to polish off half a fried bird with your choice of sides (collards and mashed potatoes are a solid choice).
KEEP WESTWORD FREE... Since we started Westword, it has been defined as the free, independent voice of Denver, and we'd like to keep it that way. With local media under siege, it's more important than ever for us to rally support behind funding our local journalism. You can help by participating in our "I Support" program, allowing us to keep offering readers access to our incisive coverage of local news, food and culture with no paywalls.
Make a one-time donation today for as little as $1.