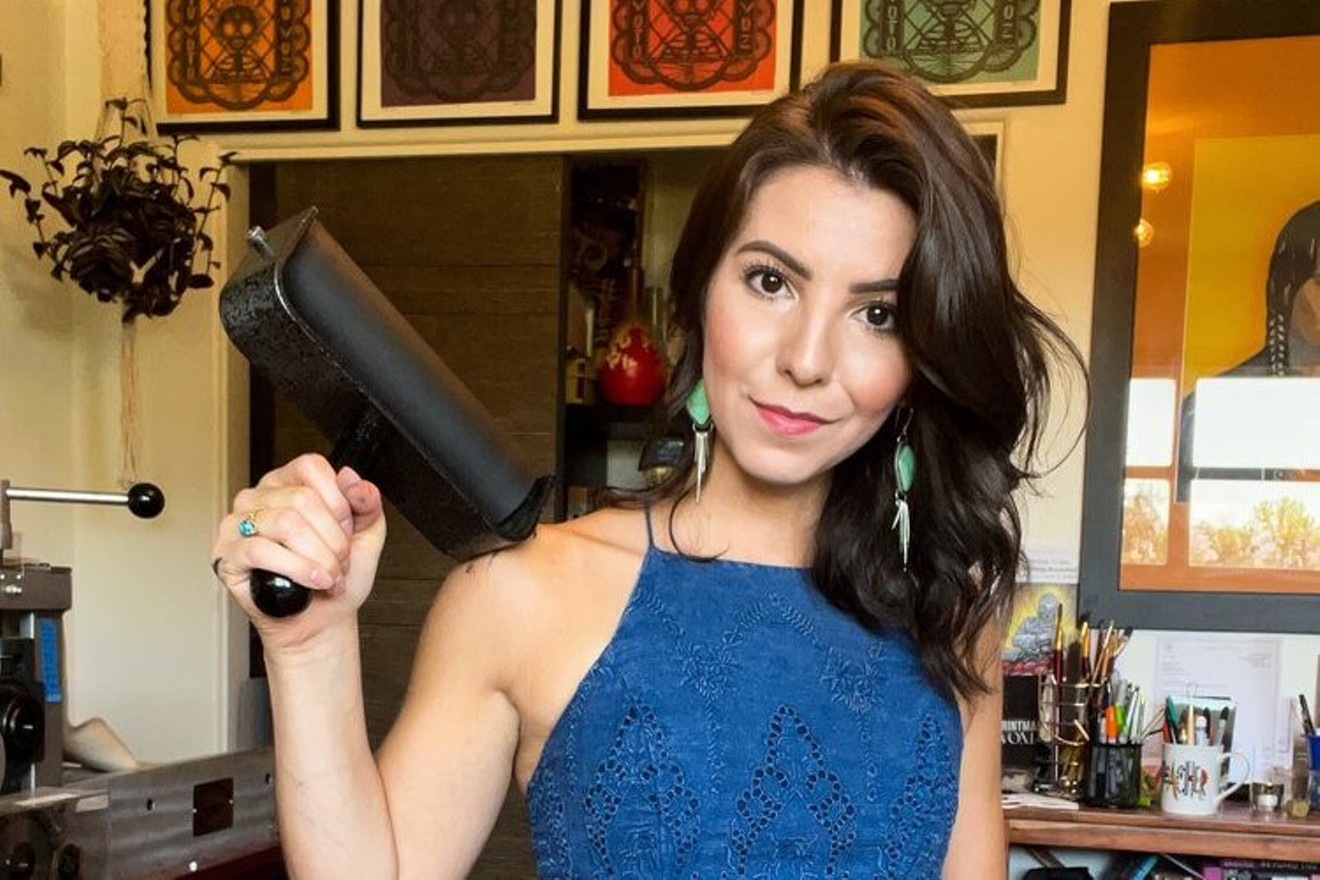 The artist will be at a reception for Arte de Lupulo/Hop Art September 9. Christietiradoarte.com
Dry Dock Brewing is celebrating National Hispanic Heritage Month by hosting Christie Tirado and her show Art de Lupolo/Hop Art at its North Dock location. Tirado is a Mexican-American artist and elementary school art teacher from the Yakima Valley area of Washington, a region that grows many of the hops used in local Denver breweries; she employs a unique woodblock printing technique to commemorate the many Mexican migrant workers in the hop fields.

Tirado will be at a meet-and-greet reception for the show at Dry Dock on September 9 and will offer a block-printing workshop there the next day. We recently caught up with her to talk about her art, inspiration and goals.

Westword: When did you first learn about migrant workers in the hop farms of Yakima? What resonated with you about their story?

Christie Tirado: I first learned about this diaspora when I moved to Yakima back in 2014. I knew that Yakima was known for having a large Latinx community and was also one of many fruit baskets of the nation —producing many labor-intensive crops like apples, asparagus, berries and hops. The majority of the people who help cultivate and harvest these crops are migrant and/or immigrant workers from Mexico, as well as local residents who have lived here for several generations.

During harvest season, Yakima really comes to life not only with the type of fruit, vegetables and hops that are cultivated, but [with the] languages and stories that you hear in the supermercados and las tiendas. During harvest, you see buses full of migrant workers getting dropped off in the mall/grocery parking lot so they can go shopping for food and goods for the week. At the same time, you will experience the restaurants and breweries bustling with brewers and beer connoisseurs from all corners of the world, just to try to get their hands on the latest hop varietal and taste the latest fresh hop beer. Harvest season is a fascinating time to live in Yakima. 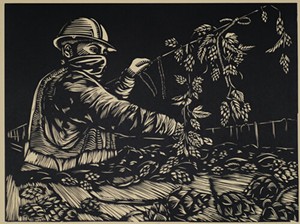 Christie Tirado uses woodblock printing for her hop series.
Christie Tirado
The reason that I gravitated to create prints of Mexican farmworkers is because I have always felt that there has been a disconnect with the idea of the physical labor that goes into growing and harvesting a crop and the commercialization and consumption of the final product. People can go to the grocery store and buy their veggies and sauté them to make an extravagant dish, and they thank the chef/cook for crafting it. The same thing goes for hops and other agricultural-related industries. You drink your beer and appreciate the combination of flavors and aromas that go into crafting an exquisite beer, and you can applaud the brewers for creating such a wonderful concoction. However, how often do people think about all of the "other" hands that these cones, veggies or produce had to go through in order for them to make it onto your dinner table? How many thanks have been given to the land, the plants and the people who cultivate and harvest these creations in order for us to consume them? How often do we thank our nation’s farmworkers for the work that went into planting the crops, training them to go up and around the trellises, and making sure they are watered? How often do we thank the farmworkers for harvesting this produce during downpours, record-breaking heat, wildfire smoke or even during a pandemic? Not often, because not everyone is exposed to these realities. And this is one of the main reasons I create — to get people thinking about realities outside of their own.

How does this project fit in the larger scope of what you do as an artist?

Right before the pandemic, I began to create a series of prints that capture Central Washington’s farmworkers harvesting major crops such as apples, cherries and grapes. Being the daughter of two immigrant parents, I feel the work that they did often went unseen and unrecognized. Their efforts were never celebrated and/or appreciated by the companies that they worked for because they were just another number — or, as they say, “disposable.” I feel that it’s my responsibility to make sure that that changes. I may not have the power to directly make an impact on farmworkers' rights on a legislative level, but I am certain that by creating these pieces, I can bring awareness and help humanize these people, and maybe, just maybe, it will reach an audience in positions of power that can help make a difference. I’ve always felt that it is an artist's responsibility and duty to reflect the times we live in, and for me, I’m utilizing my craft and my privilege to create pieces that can help recognize and advocate for a more just world for our nation’s campesinos.

Why did you choose woodblock printing for this project? What draws you to this technique, and how did you learn it?

I first learned about printmaking during my undergrad years at the University of Washington. I chose to render these pieces in block printing because printmaking is a form of communication and has historically been used as a vehicle to disseminate information to the masses. 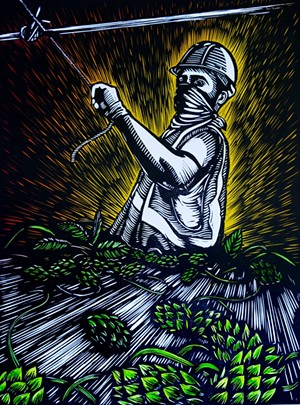 A hop worker print.
Christie Tirado
In Mexico since the late nineteenth century, artists used printmaking as a tool for sharing news, both politically and socially, all while celebrating Mexico's national culture. Take Mexican printmaker José Guadalupe Posada, for example: He revolutionized the way information was consumed by a population disenfranchised and marginalized in Mexico. Because a huge percentage of the population at that time was illiterate, he created the news in forms of prints, which allowed the masses to stay up to date with the daily news carried out by the elite and corrupt politicians. He created prints about the people for the people, and disguised these politicians in the form of satirical calaveras. Moving forward, printmaking was also used as a form of expression and resistance in the Chicano movement during the 1960s and ’70s. Artists and activists during this time were utilizing silk screens to illustrate and advocate for economic, cultural and political freedom, and used poignant imagery as a way to fight social oppression and discrimination (see "Sun Mad," from 1982 by Ester Hernandez).

For me, the medium of the piece is just as important as the message, or el contenido. Historically, prints were created as an inexpensive and easy way to distribute information, and that meant that more people could have access to that piece, and the same is true today. In most cases, a one-of-a-kind painting is going to be more expensive than a print with an edition of 50, 100 or even 500. With a painting, you have one, and with a print you can have many. If an artist creates a one-of-a-kind piece and a private collector acquires it and keeps it stored away in their vacation home, then who’s going to be able to access that work of art? Not very many people. Prints allow for more than one person to acquire and have access to an original work of art.

What type of response have you had so far?

I’ve had many people connect with the imagery in my work and reach out to thank me for creating these pieces. I've also had people invite me to do workshops for the community, so they, too, can learn about the process of printmaking.

What do you hope to achieve with the Dry Dock meet-and-greet, as well as the workshop?

What pieces do you plan to display at Dry Dock?

I am going to be exhibiting my hop series that I started back in 2018. These pieces capture the process from twining to training to harvest. Some of them are relief prints, and two of them are giclée prints — which are high-quality reproduction prints of gouache paintings. I also have some new, revamped relief versions with color.

How did you connect with Dry Dock?

This collaboration started with Marty Jones, a longtime promoter and publicist in the craft beer trade; he reached out to me after seeing my artwork featured on the cover of February's High Country News. He looked through my site and saw that I had created prints about hops. After several emails and phone calls, he invited me to collaborate and exhibit these pieces at Dry Dock Brewing. I think it’s neat how beer and art have the power to bring groups of people together that otherwise probably wouldn't meet.

See Arte de Lupulo/Hop Art and meet Christie Tirado at 5 p.m. Friday, September 9, at North Dock, 2801 Tower Road in Aurora; admission to the meet-and-greet is free; find out more here. Tirado will also offer a block-printing workshop with the Latino Cultural Arts Center from noon to 4 p.m. Saturday, September 10, at North Dock. Tuition is $60 per person; register here.
KEEP WESTWORD FREE... Since we started Westword, it has been defined as the free, independent voice of Denver, and we'd like to keep it that way. With local media under siege, it's more important than ever for us to rally support behind funding our local journalism. You can help by participating in our "I Support" program, allowing us to keep offering readers access to our incisive coverage of local news, food and culture with no paywalls.
Make a one-time donation today for as little as $1.