Q&A: Jess and Rich Fierro of Atrevida Beer on Moving Forward After the Club Q Tragedy 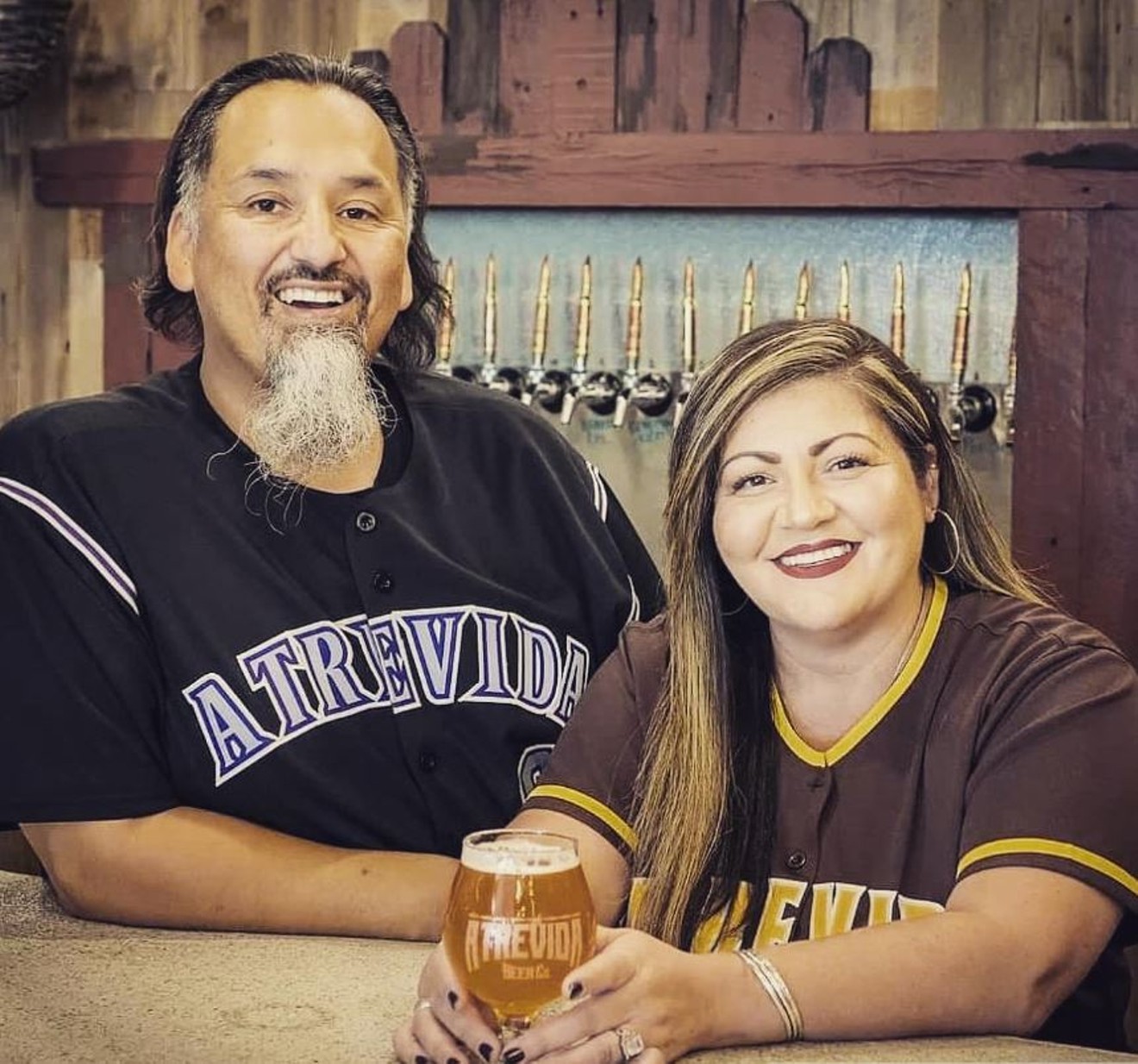 Rich and Jess Fierro of Atrevida Beer. Atrevida/Instagram
Just before midnight on November 19, a shooter entered Club Q in Colorado Springs and began firing at patrons and staff in the crowded venue. Rich Fierro was attending a drag show with his wife, Jess, and their daughter at the LGBTQ club, a longtime safe haven for the community.

When the shooting began, Rich, a decorated Army veteran, rushed across the room and tackled the shooter, knocking the rifle away. The shooter also had a handgun, which Rich took away and began to hit the shooter with. Several other patrons helped Rich as well. Unfortunately, there were five deceased victims that night, including the Fierros’ daughter’s boyfriend. Many have credited Rich with preventing more lives from being lost, and he’s received phone calls from President Biden and Governor Polis, as well as a great deal of recognition from the community for his heroic actions.

Throughout this tragedy, Atrevida Beer, the Colorado Springs brewery that the Fierros co-own and that Jess Fierro operates, has received an outpouring of attention and support. In Spanish, "atrevida" means "bold" or "daring," and it has taken on an enhanced meaning after the awful events of November 19. We talked with the couple about the brewery, how they’ve handled the recent attention and what the future holds. 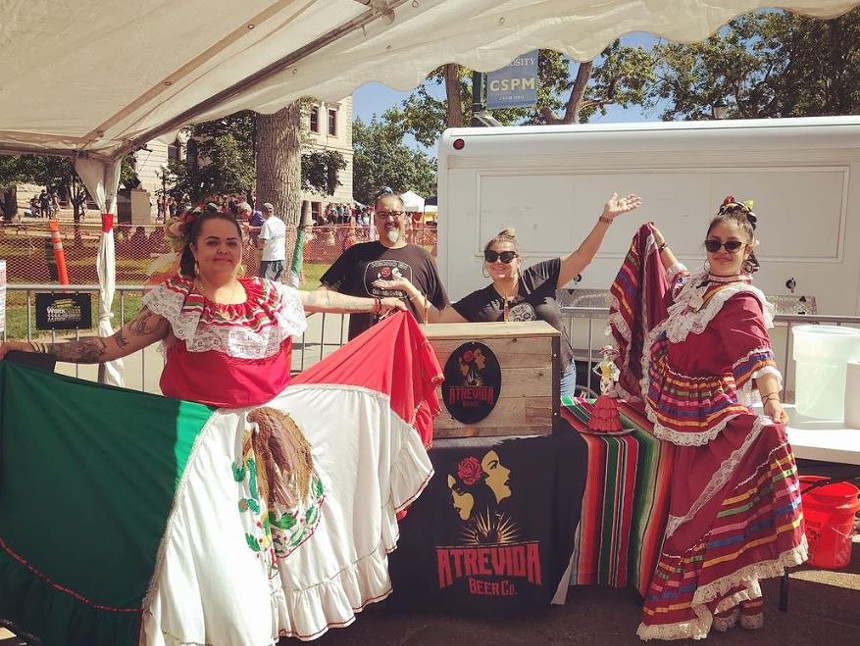 The Atrevida team at Fiestas Patriascos.
Atrevida/Instagram
The two of you spent some time drinking beer while Rich was stationed in Germany. What were some of your favorite beers over there, and did any of those beers inspire the beers at Atrevida?

Jess: One of the first beers that I really enjoyed was from Weldebrau out in Plankstadt. It almost had a lime, grassy kind of taste. I do my own version of that at the brewery today, called El Dorado.

Rich: I love Hefeweizen, so all of them were amazing. At the end of the day, Germany was an experience in and of itself.

There’s a lot of creativity in the brewhouse, and many beers have a unique twist to them. A witbier with cinnamon and agave, an Irish red ale with chapulines, the previously mentioned El Dorado Kolsch with fresh lime. How do you come up with these beers? What inspires them?

Jess: A lot of my beers are inspired through our [Latin] culinary culture — flavors that I’ve been brought up on and been introduced to. For example, the Drunken Churro. It’s a Belgian Wit; I love Belgian beer. The churro is one of my favorite pastries from our culture. And I’m a tequila girl, so I throw a little agave in there.

I kind of take the best of everything I know and love and I try to incorporate it into my beer. I try to keep it well balanced so you’re not just drinking all of those flavors. At the end of the day, it still tastes like a beer.

Jess: Prior to everything happening, it was hit or miss, honestly. A lot of us small businesses were still in a recovery phase as far as COVID goes, still trying to play the catch-up game a little bit. We were starting to pick up; folks were starting to come in more.

Since the incident, we’ve had a surge of folks coming in and supporting us. Whether they're buying beer or not, they want to come in and say thank you. We’ve seen an influx, and we’re well aware that that’s not going to be for the long haul.

You reopened on December 2, the first day since the night at Club Q. What was that like? What was the atmosphere like? How did you feel to see patrons again?

Rich: Very overwhelming. We didn’t even intend on being there; our staff had asked to be open. We talked to the police to make sure there was coverage, just in case, since it’s still close.

It was all the way through, nothing but love and joy. I tried to thank as many people as I could, just for taking the time out of their day to come be with us. And we got there about an hour after opening because the staff said this is not normal, we need help. So Jess and I went down there, and our daughter ended up coming with us, too.

This was our first time back in a crowd, back at the brewery since the incident, and it was wonderful to see the variety of folks that showed up, and the peace and love that was going on in there. I don’t know, Jess — it was probably the best night we’ve had there, along with our opening?

How hard has it been to deal with the attention? How are you managing?

Rich: Well, Jess has already been a TV personality, so I always laugh, because I tell her she’s always been a star before I was even a blip. She’s been on Beerland, Axios, Samantha Brown. She’s been on all these media things and won all these awards. She was managing all this stuff for me the day it all came out and everyone wanted to talk to me. She wrangled everybody together, put it together, because she knows how to do that.

This is all new to me, man. I’m blown away. I usually just take her to places where she needs to go, because she makes the meetings. Now I’m learning how to use Zoom and all this other stuff. It’s interesting.

Look, we’re very humbled, this whole family. It’s just a five-person brewery, not including myself, and I’m there after work and on weekends when I’m needed. We had ten T-shirts in the back when this happened. We make our beer as we go. Jess had a month and a half worth of beer before. Now I don’t know if we’ll have enough to make it to the end of next week.

That’s what’s so overwhelming. Jess has put this in place well before this happened. Diversity on tap has been our thing since we opened in 2018, and she has a vision and continues to push it, and it’s finally becoming something that is resonating with folks. It’s what it’s all about, bringing people together, having a good time and raising a glass. 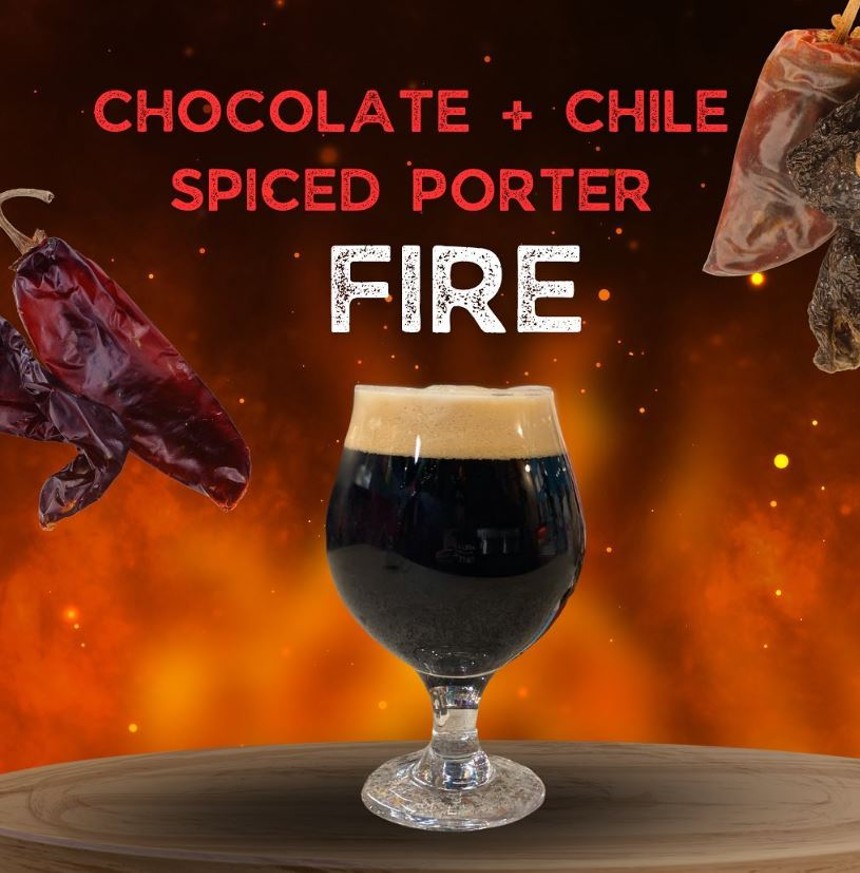 Atrevida beers are inspired by Latin culinary culture.
Atrevida/Instagram
There is a lot of healing happening, I’m sure, and it’ll continue to happen for the community. How does beer play a role in helping people heal from such a terrible tragedy?

Rich: We’ve looked at this as her vision coming to fruition, and the visibility she’s been going after is finally in place. It’s a wonderful gathering of community after a tragic event. I’ll be honest: There’s very few places for the LGBTQ community to gather. We’re making sure we’re open for that in any way, shape or form. We’ll hopefully continue to be that place, if they don’t want to do the club or don’t want to go anywhere else and just want a craft beer and everybody wants to get along. Everybody is welcome at Atrevida.

Do you see anything changing mid- to long-term with the brewery after this tragedy? Is the focus the same as before, or is there an additional meaning or new chapter for the brewery?

Jess: We’ve had plans in place for expansion. We’d still have our location off of Nevada Avenue, but I think more than anything, we have to think about how we move forward and use this new platform to do good. Prior to this, I’ve worked with the MOSAIC Program, Inside Out Youth Services. These are organizations that we’ve given to throughout the years. And that’s not going to change; we’re going to continue to work and keep our relationships with those folks. Now it’s a matter of having [gone from] maybe 2,500 followers on our Instagram to 80,000 people. So now we truly have a platform to where we can do some good, and that’s what I intend to do.

What’s the best way people can support the brewery?

Jess: Right now, we’re really driving folks to the GoFundMe accounts that we know are official accounts for [the victims and their families].

Rich: We have a donation tab on the website, because people were buying things and saying don’t send the items to me. Since we’re trying to sort through the orders heads and tails right now, if you’re just trying to contribute to us, there’s a button there. My daughter posted the linktree, which includes all five victims, and then a lot of the folks that were just impacted, and that’s on our social media.

Is there anything else that you would like to say?

Rich: I want to thank — because Jess has told me and she’s really humble about this stuff — but I want to thank all the breweries locally across the state, and even across the nation, that have reached out to [support us]. We appreciate all of it; that’s kind of why we like what we do. The craft beer community is a close one. We’re all trying to do this together. It was nice for her to hear from people wanting to donate beer, to donate time. For our community, for the craft beer community, it was a wonderful thing.

Jess: As well as the service community as a whole. They’ve also reached out to help us — work the bar free of charge, all those types of things. It’s wonderful, it’s really a silver lining, kind of, when you see that humanity pop up.

Atrevida Beer is located at 204 Mount View Lane in Colorado Springs.
KEEP WESTWORD FREE... Since we started Westword, it has been defined as the free, independent voice of Denver, and we'd like to keep it that way. With local media under siege, it's more important than ever for us to rally support behind funding our local journalism. You can help by participating in our "I Support" program, allowing us to keep offering readers access to our incisive coverage of local news, food and culture with no paywalls.
Make a one-time donation today for as little as $1.