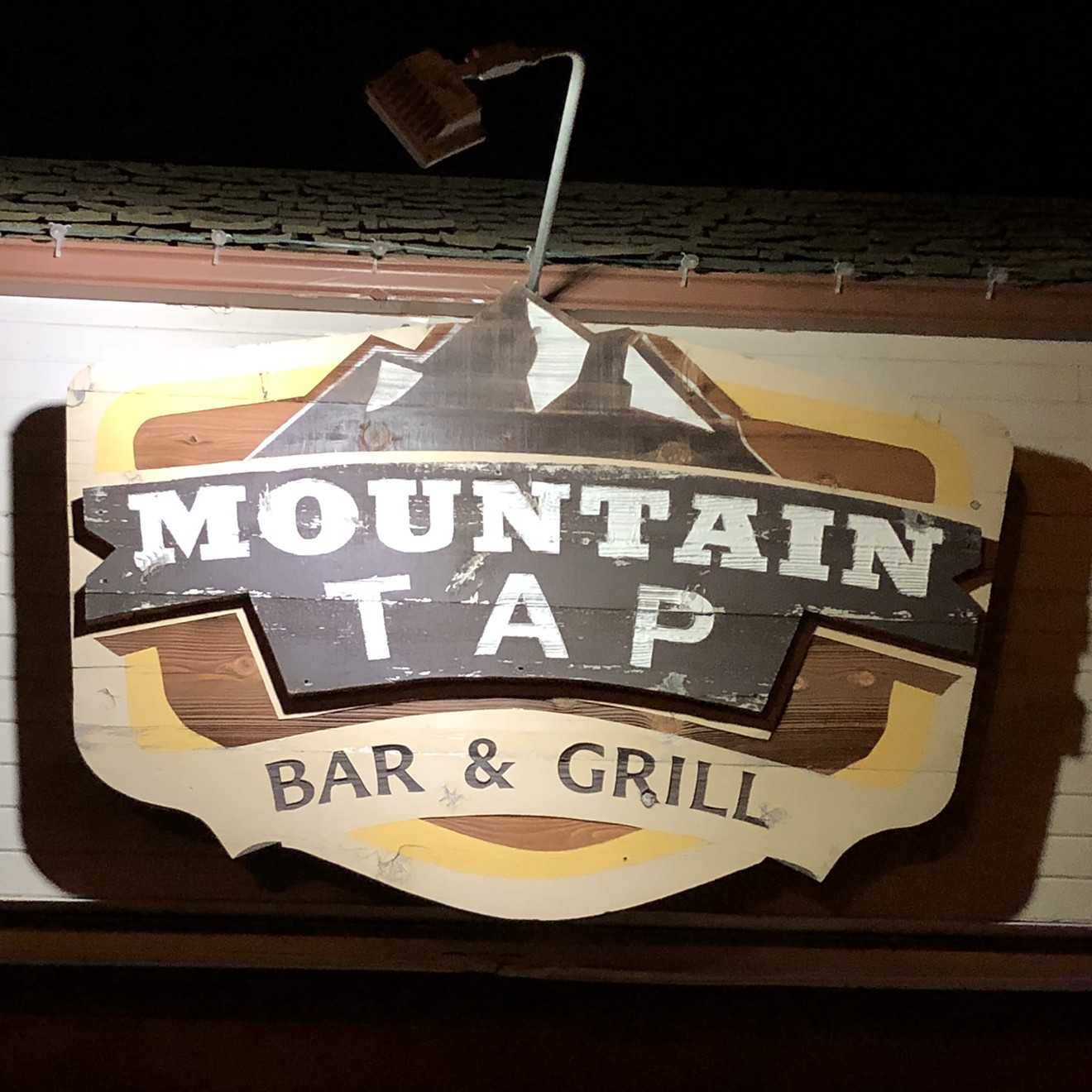 Mountain Tap Bar & Grill loves all its neighbors, whether they're from Lakewood, Golden, or anywhere else. Sarah McGill
As I mentioned before, I'm starting to venture farther into the Denver suburbs in search of new drinking spots to know and love. The latest journey took me right to the border of Golden and Lakewood, to a bar on the Golden side of Youngfield Street. As a fairly lazy person when it comes to driving far on weekdays, I was surprised to find myself in the exotic locale of Golden, yet not really that far from home.


My friend who lives in Lakewood visits Golden frequently, so on her suggestion, we hit up the Mountain Tap Bar & Grill — a relative newcomer at four years in business, but a quality neighborhood bar nonetheless. It was opened by Demetrius Stavropoulos, who wanted an establishment with the right combination of bar games, bar food and beers — all under one roof on the west side of town. And that's what's going on at Mountain Tap on any given night. On the weeknight my friend and I stopped in, there was a small crew of guys and gals looking pretty serious about their darts game right next to the door. I later learned it was dart league night. So of course they were serious: Those darts were not just for fun, but for glory! Farther in, the pool tables were empty, but not for long. Other notables on the list of games, showing Stavropoulos's commitment to fine bar entertainment, were Bonus Hole (one of my personal favorites), Megatouch, Golden Tee, Big Buck Hunter, and not one, but two pinball machines — with Family Guy and Batman themes.

The whole place has a Colorado mountain-ish theme, as one comes to expect as you get farther west in the metro area. From a bench made out of two snowboards, to old-timey knickknacks that look like something from a Cracker Barrel (only not mass-produced) sitting on ledges, to the rustic-looking wood finishes on everything in the place, it was like an exhibit of everything tourists think Colorado is about — in a good way, of course, because much of it actually is what Colorado is about. 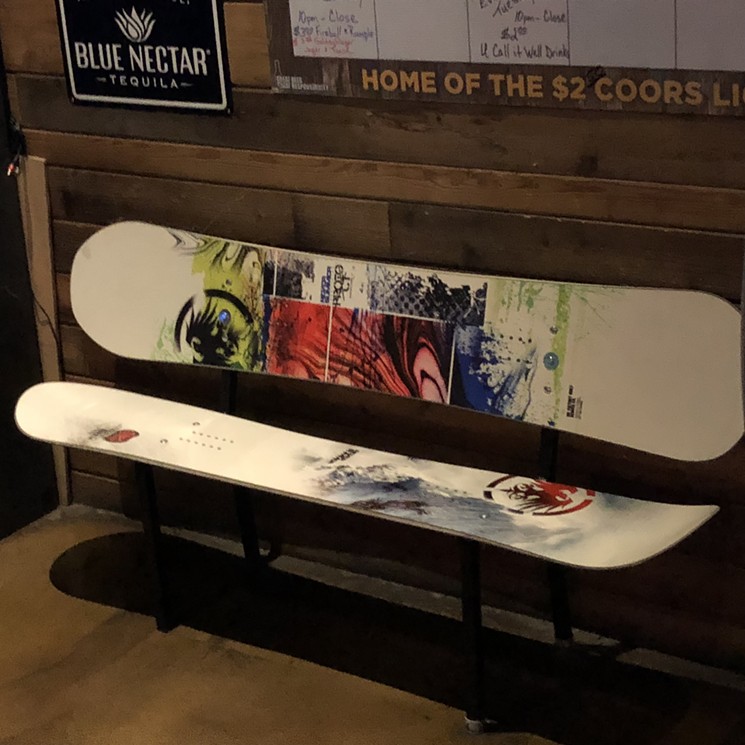 This right here is pretty Colorado.
Sarah McGill
A great private patio with a fire pit and separate bar is also appropriately Colorado. Smoking is allowed out there, but it was a little chilly for sitting around the fire or doing anything else in the great outdoors. Instead, we passed by the patio door and took a seat at the bar (covered in ski- and beer-related bumperstickers), next to an older guy looking up holiday flights on his laptop. (You gotta do what you gotta do, man.)

We took a look at the row of taps, which ranged from craft options to your usual Coors products, and selected our beers. The bartenders were busy but friendly, on the late edge of the lengthy 2 to 7 p.m. daily happy hour. Specials include $2 domestic beers, $4 Jameson and $3 Jägermeister and Jim Beam, as well as certain appetizers for half price. My friend and I eyed the food menu, full of an interesting mix of Greek items like gyros and souvlaki alongside bar staples like wings, club sandwiches and quesadillas. Apparently the Greek fare and wings are house specialties. We went with the "Shrooms," a basket of nice and crispy fried mushrooms with ranch dressing that did not let us down in the least. There are also some good deals here, such as "Time Crunch Lunch": your choice of a salad and half sandwich for $7, available from 11 a.m. to 2 p.m. every weekday. 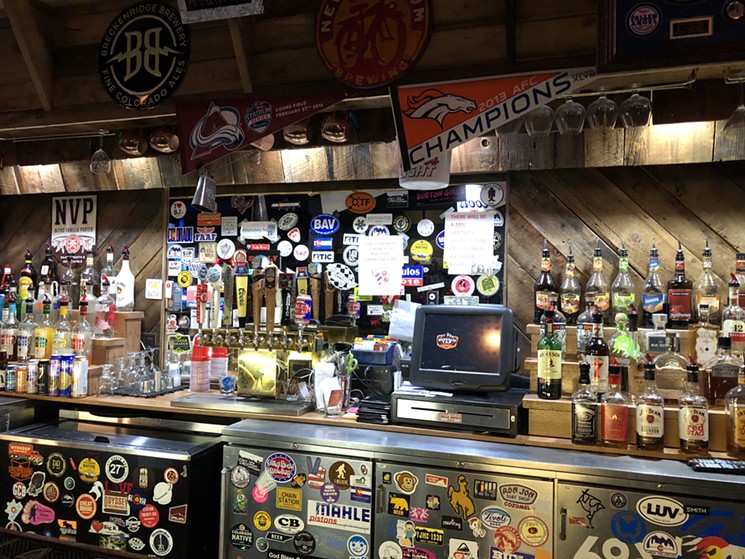 Behind the bar at Mountain Tap & Grill, you'll find a lot of beer stickers and beers to go with them.
Sarah McGill
The clientele included the aforementioned darts players, who looked to be in their thirties and forties, and a couple of families with kids sitting at the tables near the windows across the bar from the pool tables. At the bar with us were a few couples and a few older guys, some of whom were using the free wi-fi with reckless abandon, while others were watching Monday Night Football on the TVs over the bar. People trickled in and out as the night wore on, and it eventually got pretty quiet — except for those darts enthusiasts, who just wouldn't quit — by the time we headed out around 10 p.m.

As things died down a little and we talked more to our friendly bartender, he told us that there's a good, reliable Applewood neighborhood crowd that can be found in the place on any given night. Applewood is the name of the area surrounding the bar, in a spot where it's only a five-minute drive to be in the heart of Lakewood, Golden or Wheat Ridge. He appreciates the upstanding and sedate patrons here because he used to work on Colfax and had some sketchy experiences there. (Haven't we all?) He also likes all the fun events that draw a crowd. The calendar is chock-full of special events at all times, with weekly happenings like Taco Tuesday, Wednesday night trivia and Thursday pool leagues. Sometimes there's live music in the house on weekends, and Saturday is always karaoke night. Aside from these events for everyone, the fine folks at Mountain Tap will host private and semi-private parties in the bar. Also common are fundraisers for charities like St. Jude's Hospital and the Fallen Angel Aviator Foundation. If you plan to make the place a regular stop, ask about the free loyalty program, which will get you 10 percent back on every $100 spent.

So if you feel like maximum bar games, maximum Colorado vibes and all the happy hour you can handle in the exotic environs of Golden (but not really Golden), Mountain Tap Bar & Grill might just be your new neighborhood bar.