A Vintage Colfax Motel Gets a New Life...and a Modern Coffee Shop

Jeff Bebout will add neon back to the original Brandin' Iron sign. Courtesy of Glass Arrow Coffee
A Colfax Avenue landmark is getting a facelift. The 1950s-era Brandin' Iron Motor Lodge, at 8600 East Colfax Avenue, is being remodeled into 35 micro-apartments, and the renovation will include a coffee shop from Glass Arrow Coffee, a boutique roaster founded by Jeff Bebout, who plans to open the cafe in early 2021.

Glass Arrow was born from Bebout's passion for coffee, kindled by his time at Roostercat Coffeehouse and named for his other skill, making neon signs. The two crafts will come together at the Brandin' Iron.

Bebout's journey to coffee roasting was not a straightforward one:  After a "real estate-adjacent" career, he was offered a job as a manager by a friend who had purchased Roostercat. Bebout's answer was initially no, but he eventually joined Roostercat as a partial owner. "It was a community I knew; I had been a regular there since the Gypsy House closed," Bebout recalls. "I switched to Roostercat, and I learned to roast. I fell in love with roasting, owning a shop and fostering the community that goes into owning the shop." 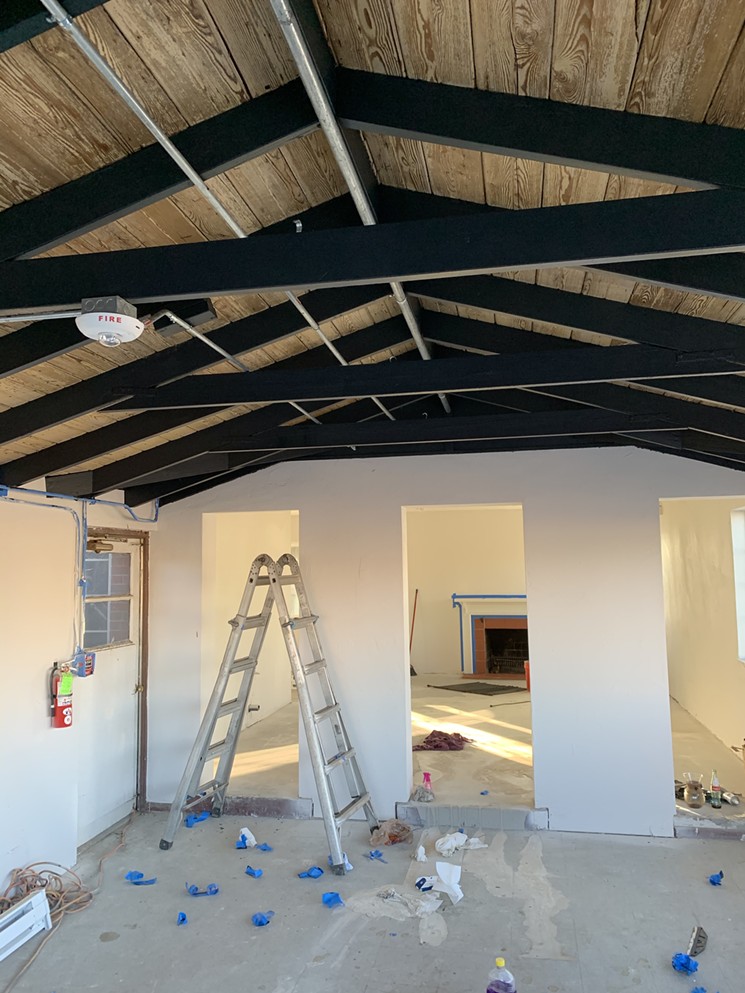 Jeff Bebout is doing much of the construction at his soon-to-open coffee shop himself.
Courtesy of Glass Arrow Coffee
After several years, however, Bebout and his business partner decided to sell. "It's a difficult location, the overhead is high, and my romantic partner got pregnant," he says. "Roostercat was losing money, so we found some wonderful people to take over who had the money to put into it and that had the love that it needed."

Although he initially started roasting just for Roostercat, he rented roster time at MORU Coffee and soon added a white label for Mutiny Information Cafe and several other community-oriented cafes. He had enough business to consider purchasing his own roaster when a new opportunity came along.

The Branding Iron Motel was purchased in 2017 by Alison Shunneson, with the intention of turning the motel into an affordable apartment complex. Shunneson, a former lawyer who founded Runt & Bro Colfax LLC, to undertake renovation projects, decided to create micro-units as small as 350 square feet to stay true to the motel's original layout, and named the project the Brandin' Iron Apartments to maintain the property's identity. Shunneson hired Bebout, a self-proclaimed "neon dad," to restore the original sign.

This is how the Brandin' Iron looked in its heyday.
Courtesy of The Colfax Museum
"I gave her a bid [for the restoration] and said, 'Just so you know, this isn’t my full-time thing; this is just a passion thing for me — what I really do is coffee,'" Bebout recalls. It turned out Shunneson wanted to add a coffee shop to the property, so a plan began to fall into place. "At first I blew it off because I was content roasting, but the rent and location was a match made in heaven," Bebout adds.

So in addition to restoring the motel's sign, he 's been working on the buildout of the Glass Arrow coffee shop, which will include its own roaster. With a little financial help from his family — "just enough to start some shit," according to Bebout — the construction is slowly coming along. Much like the apartment units, the shop itself is relatively small.

"I'm going to start out walk-up only because I can’t afford the building permits to have people dine in," says Bebout, which works perfectly for COVID times.

Bebout roasts coffee at MORU, which rents roasting time to other small-batch coffee makers.
Courtesy of Glass Arrow Coffee
At the revived motel, expect to see plenty of neon signage created by the coffee shop's owner, including a historically accurate renovation of the main office's sign, neon along the exposed rafters inside the cafe, numerous neon window signs, and a neon picture frame to hold a portrait of one of Roostercat's baristas, which will hang over the fireplace as a memorial.

"The things that built the communities that I’m a part of have been art and activism...centered around coffee shops," Bebout notes. "In central Denver, it’s becoming more and more difficult to be an artist, an activist and working-class. It’s hard to be on the fringes in Denver.

"Moving out to East Colfax is a double-edged sword: Coffee shops come in and gentrification starts," he continues. "I'm trying to be a part of their community, not push my own idea of what East Colfax should be. I’m not trying to change or price out that neighborhood. I want to keep things affordable."

With that in mind, he says lattes will be $3 at most, with regular drip coffee no more than $2.50. Bebout had originally planned for a mid-November opening, but is now aiming for an early 2021 date to light up the neon and get the coffee roasting at the new Glass Arrow at the renovated Brandin' Iron.
KEEP WESTWORD FREE... Since we started Westword, it has been defined as the free, independent voice of Denver, and we'd like to keep it that way. With local media under siege, it's more important than ever for us to rally support behind funding our local journalism. You can help by participating in our "I Support" program, allowing us to keep offering readers access to our incisive coverage of local news, food and culture with no paywalls.
Make a one-time donation today for as little as $1.