Every Restaurant Opening and Closing This Week, May 21-27 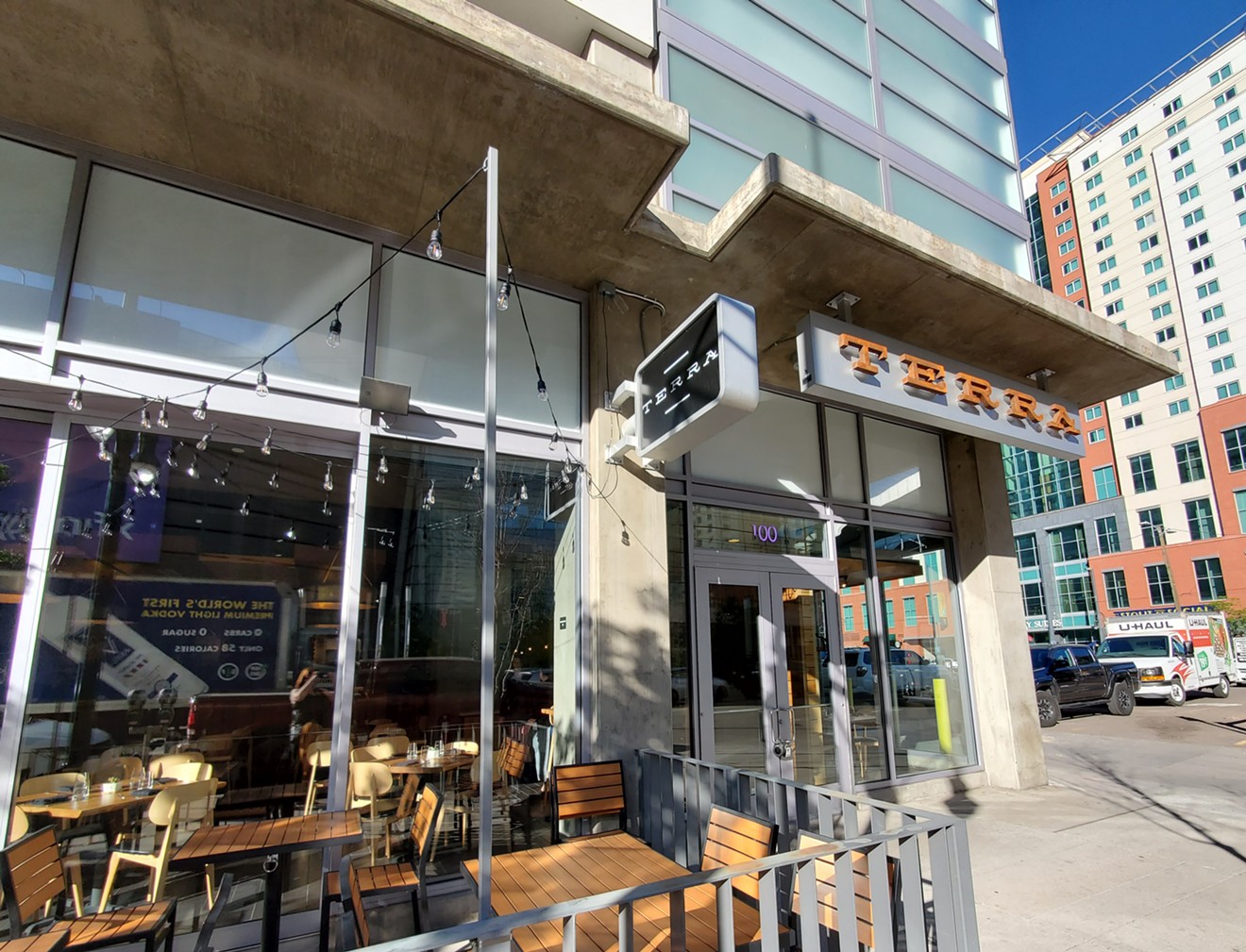 Terra opened across from the Convention Center on May 26. Molly Martin
Only one restaurant made its debut this week. Terra, located across from the Colorado Convention Center in the former home of Uncle Joe's Hong Kong Bistro, officially opened on May 26. Chef/owner Scott Schaden is originally from Boulder and has worked in kitchens since he was fifteen, including stints at Colt & Gray and Pizzeria Locale under the Frasca Food and Wine group.

After spending some time living and working in Chicago, Schaden moved back to Denver right before the pandemic and decided it was time to open his own place. "I want to represent our region and our flavors," he says of the concept. "So chiles, corn is going to be king, squashes, beans, juniper, huckleberries, Alaskan salmon, Washington oysters, Southern California tuna. All of those things. You're going to get the bounty of the West."

A bar opened this week, as well. 12 Spirits Tavern is located in the bottom floor of the historic (and supposedly haunted) Patterson Inn, which owner Chris Chiari purchased in 2018. The space is meant to be an additional amenity for guests of the inn first and foremost, but Chiari also hopes it will be a before- or after-dinner stop for people in the neighborhood — particularly those who pass the building regularly but have never stepped inside. The Patterson Inn is also the first hotel approved for social marijuana consumption; the weed-friendly lounge, which is located on the opposite end of the property from the bar, is expected to open this fall.

Wontons in chile oil from Little Chengdu/Blue Ocean, which will close on May 31.
Molly Martin

The onslaught of closures continues this week, with three to report and three more shuttering in the coming days. In late April, a message on the Ale House website announced its temporary closure — but it turns out the restaurant has shut down for good. The space was typically a favorite at this time of year because of its rooftop patio, but competition in the LoHi neighborhood combined with slow sales through the pandemic ultimately brought it down. Looking for other rooftops to hang out on this summer? We've got you covered.

Allegro Coffee Roasters on Tennyson has also shut its doors, along with a place with perhaps the worst name for a restaurant in metro Denver: Dirty Pit Craft House. The Littleton spot was open for fewer than four months before calling it quits amid claims of unpaid wages by former employees, according to a 7News story.

On Saturday, May 28, To the Wind will serve its last meal on East Colfax, ending an eight year-run during which the small spot was considered one of the best eateries in the city. The next day, May 29, will be the last hurrah for Freshcraft. And on May 31, one of Denver's few Szechuan restaurants, Little Chengdu/Blue Ocean, will say goodbye, taking with it the hand-pulled noodle skills of chef/owner Jack Ning.

12 Spirits Tavern has a concise menu of cocktails and snacks.
Molly Martin

What did we miss? Send a note to [email protected]
KEEP WESTWORD FREE... Since we started Westword, it has been defined as the free, independent voice of Denver, and we'd like to keep it that way. With local media under siege, it's more important than ever for us to rally support behind funding our local journalism. You can help by participating in our "I Support" program, allowing us to keep offering readers access to our incisive coverage of local news, food and culture with no paywalls.
Make a one-time donation today for as little as $1.