Chong qing chicken. Molly Martin
Denver's dining scene is making a big comeback — and we're hungering to go out. With so many new ventures and old favorites to visit after more than a year of restaurant shutdowns and restrictions, the choices can be overwhelming. So we're serving up Short Stop, with recommendations for things that should definitely be on your culinary short list. This week, head to Noodles Express. The place: Noodles Express could be easy to pass by. It opened in February 2020 in what used to be a Rubio's near the Belcaro King Soopers on busy Colorado Boulevard — right before the pandemic led to the shutdown of indoor dining. The timing, as well as its appearance, has been a challenge for the restaurant, whose name implies that this is simply a fast-casual, noodle-focused eatery. But it's much more than that.

The inside is sparsely decorated, with a counter for ordering food to go and a handful of tables, each set with a jar of chile oil. But despite its humble looks, the menu offers diners the chance to taste Szechuan specialties done right, something that's hard to find in Denver with the exception of just a few other places (including Blue Ocean Asian Cuisine in the Tech Center and Szechuan Tasty House on East Evans Avenue).

Spicy boiled fish.
Molly Martin
What you're eating: While there is a section on the menu called "America's Popular," with dishes like sesame chicken and beef and broccoli, that's the least interesting part. The bulk of the menu is a long list of Szechuan selections, and that's where your focus should be. Noodles make an appearance, too, but that section includes just six options — despite the fact that noodles are the main focus of the restaurant's name. One thing that is completely accurate, though, is the "express" part of the restaurant's moniker: Every dish came out in minutes.

Many of these dishes are heavy on mouth-numbing Szechuan peppercorns and chiles, particularly the chong qing chicken ($17.95). Small pieces of chicken (with bones, as the server will warn you) are fried with a light, crunchy coating and tossed with an ample amount of the peppercorns and red chiles. Like a seriously amped-up version of a chicken nugget, these little bites may have a kick, but it's the type of spice that keeps you coming back for more. 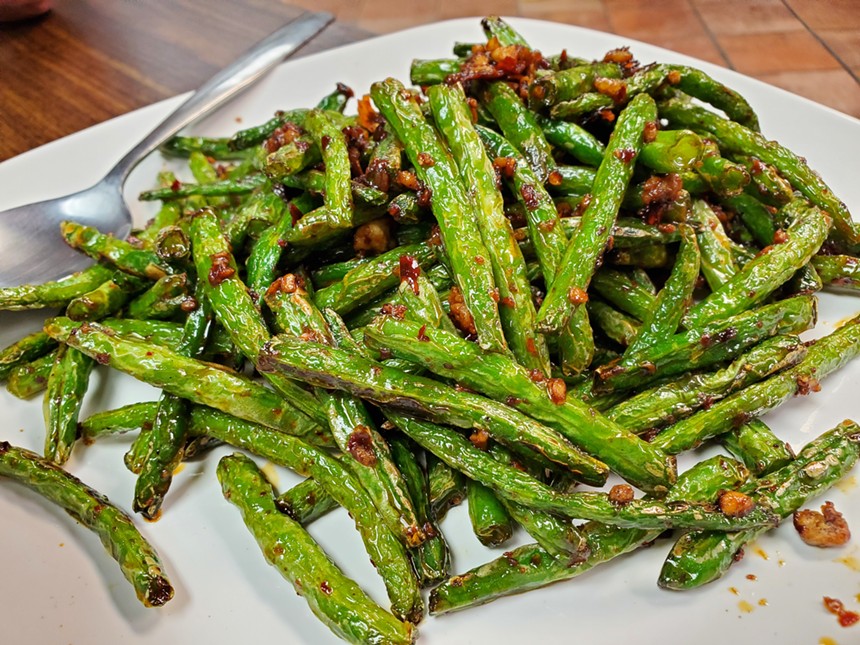 Pan fried green beans.
Molly Martin
A heaping plate of pan-fried green beans ($14.95) is studded with savory, caramelized bits of ground pork. These, too, have a smattering of chile flakes, but umami is the main flavor, making this a nice reprieve from other, more spice-forward selections.

Despite its designation on the menu as another one of the "spicy" dishes, the dan dan noodles are mild in comparison to the chong qing chicken and boiled fish. A tangle of thin, spaghetti-like noodles arrives with a pile of ground pork, preserved vegetables and fresh herbs on top. Again, the server provides some direction: "All the best flavor is on the bottom, so mix really well," he instructs. The result is another umami-packed dish — and if you do want more heat, go ahead and reach for the jar of chile oil.

Every dish is large enough to share, which allows you to work your way through more options. With just two people, these four dishes were enough for a very filling meal, with plenty of leftovers to split. And although we were completely satisfied, the experience left us craving another visit before we even left the table. So we inquired, "What should we try next time?"

Twice-cooked pork, shredded chicken with garlic sauce, and eggplant, also with garlic sauce, were the recommendations. And I'll be taking that advice.
KEEP WESTWORD FREE... Since we started Westword, it has been defined as the free, independent voice of Denver, and we'd like to keep it that way. With local media under siege, it's more important than ever for us to rally support behind funding our local journalism. You can help by participating in our "I Support" program, allowing us to keep offering readers access to our incisive coverage of local news, food and culture with no paywalls.
Make a one-time donation today for as little as $1.