Phil's Place, a neighborhood joint in a neighborhood that's changed almost beyond belief over the past dozen years, has issued last call. At the end of the week, this bar in a prime corner spot at 3463 Larimer Street, in a building that started life a century ago as a drugstore, then housed various incarnations before it became Phil's Place in 2002, will pour its last cheap beer, shut off the jukebox and turn off the lights.

But that's not the end of the story. Unlike so many businesses in this part of town that sell, then are scraped, this one is getting a new lease on life: It will continue operating as a neighborhood joint.

The bar won't be run by Gary and Junie Garcia, though; the couple, who bought Phil's Place from their son, Phil, in 2006, will close the sale of the property to the Robert Naiman Company on October 10 and then happily retire. But the lights won't be off for long.

Leigh Jones got a call on Labor Day weekend from Robert Naiman, her landlord at Bar Car, a neighborhood spot at 819 Colorado Boulevard that she opened in 2010 after a decade at bigger venues. "I've got this space, a real cool bar in town, we're not sure what we're going to do with it," she remembers him telling her. "Do you have any desire to run it in the meantime? A bar in RiNo?"

"Of course we said yes," says Jones, who is not only a partner in Bar Car, but the Horseshoe Lounge, Inga's Alpine Tavern, the Crow and the Owl Saloon. "The neighborhood bar is our bread and butter."

Although she's a self-proclaimed "aficionado of dive bars," Jones hadn't been looking for another bar. In fact, she and her husband had been trying out other cities, while longtime partners Mel Unruh Brush and Margaret Moore are running the bars in Denver. But Jones quickly flew back to Denver to look at Phil's Place, where she'd never been despite her affinity for authentic watering holes, and she liked what she saw. "Phil's is the cleanest building I've ever seen," she says, crediting the Garcias, "real salt-of-the-earth people."

After talking with Naiman, she signed a two-year lease on the place — though, since this is Denver, it's one with a construction clause in case plans for the property's future change.

In the meantime, Jones and her "motley crew" are making plans to remodel the bathroom, adding new bar stools and installing a new carpet. But they plan to keep the down-home feel of the place, and their chef is already learning Junie Garcia's dishes, Mexican mainstays that won her loyal fans when she was cooking at the Bamboo Hut, fans who followed her to Phil's Place, after her son built her a kitchen there. Junie Garcia brought her recipes ten blocks up from the Bamboo Hut.
Westword
While Junie's classic dishes will remain the same, the bar's name will change. "Man, it was a hard decision not to keep the name," Jones admits. But after much back-and-forth discussion, they realized that with Phil long gone from the spot, they could give the place a name that better reflects the bar's role as a welcoming spot in this changing neighborhood. And so it will become the Embassy Tavern.

"Junie and Gary and Phil and probably the bar owners before them, they've been amazing ambassadors of that business," Jones explains. "It's truly stunning that a family has managed to keep that business running that long." In recognition of that family, the new name will also have a tag line: "Home of world-famous Junie's green chile." (And if you Google the name, it will show up as "Embassy Tavern at Phil's Place," Jones notes.)

"We also want to be good ambassadors," Jones says. And so while they'll recognize all the new people coming to this area, those bachelorette parties spilling across RiNo, the folks waiting for a table at hip Hop Alley across the street, they'll continue to cater to the people who just want a cheap beer at a neighborhood bar.

"Our philosophy: Take care of low, take care of high, the middle will take care of itself," Jones says, noting that a lot of the new bars in the area are "either forgetting the low or forgetting the high." As a result, while her group's bars continue to offer cheap beer, "there is that time that I want my neighborhood bar to pour me a good Manhattan," she says. 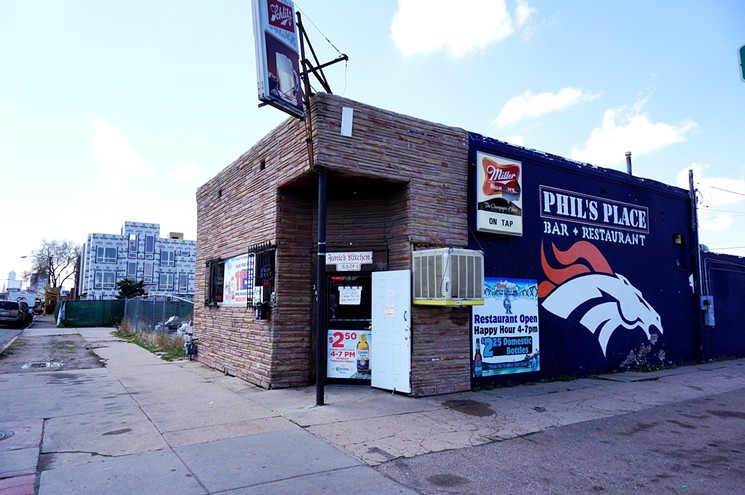 Phil's Place, before the Bronco was repainted.
Mark Antonation
Phil's Place will host a $30-all-you-can-drink End of an Era Celebration from 5 p.m. to midnight on Sunday, October 7, which will spill out of the bar and into the Exdo Event Center across the street. Here's the word from Junie and Gary Garcia, posted on Facebook:

As many have heard, yes it's true. We have sold. We want to express how much we appreciate all the wonderful people that came in and made Phils an exciting place to be. This is such a bittersweet moment, so we would like to invite everyone to party with us one last time. This party is 21+ (no exceptions) $30 all you can drink (please tip your bartenders).

We encourage everyone to bring pictures or any kind of memorabilia you've created here at Phils, as we all would love to reminisce all the crazy moments we shared with one another. There will be no tolerance for any kind of negative behavior as we are trying to say goodbye in the most positive way possible. We hope to see you all there.

After the End of an Era Celebration and the official sale of the property, Jones's crew will put through the paperwork for the liquor-license change and start a very quick, very slight remodeling. "I sure would like to be open for the Broncos game on October 18," Jones says.

Katrina "KT" Travernicht will manage the Embassy; Brush will be on the on-site proprietor, as well as the regional manager for both the Horseshoe and the Embassy. As for Jones, who just turned fifty on September 28, "I don't need to be behind the bar anymore," she says.

But she can't wait to stop in at this one, grab that good Manhattan, enjoy the atmosphere...and celebrate the save (even if it's only temporary) of a neighborhood joint.

"Authentic neighborhood bars," she concludes. "You can't re-create that shit."
KEEP WESTWORD FREE... Since we started Westword, it has been defined as the free, independent voice of Denver, and we'd like to keep it that way. With local media under siege, it's more important than ever for us to rally support behind funding our local journalism. You can help by participating in our "I Support" program, allowing us to keep offering readers access to our incisive coverage of local news, food and culture with no paywalls.
Make a one-time donation today for as little as $1.