The Campus Lounge on November 1, 2019. Mark Antonation
Autumn signifies change: colder weather, darker days, a shift from green to brown. In the Washington Park neighborhood over the past few years, fall has also come to signify changing owners at the Campus Lounge. In September 2016, Jim Wiste, who ran the neighborhood bar and grill at 701 South University Boulevard for forty years, closed the place and sold the building. In October 2017, the Campus Lounge reopened under the ownership of developer Charlie Woolley and Dan Landes, founder of City, O' City and Watercourse Foods. But that version didn't last long, and by October 2018, it had reopened under new proprietors Dan and Jeff Nickless.

Perhaps someone should have installed a revolving door at some point, because the Campus Lounge closed again this past July. But hope, usually associated with spring, has once again been renewed, as Recess Family, the owners of Recess Beer Garden in LoHi, signed a lease on the space several weeks ago, according to partner Owen Olson. Some interior remodeling is now under way to get the doors back open in mid-December.

Olson says that he and his business partners, including Recess Beer Garden co-founder William Frankland, grew up in the neighborhood, attended South High School and remember going to the Campus Lounge with their families back when they were kids. "We didn't want to see the place go away," he explains. "Most of us still live over here, and we know everyone in the neighborhood."

Recess Family was initially interested in the space when Woolley and his partners purchased the property from Wiste. The timing and details weren't right at the time, Olson notes, but they kept the Campus Lounge in mind through the openings and closings that occurred over the past two years, and decided to make a go of it when Woolley contacted them again this year. 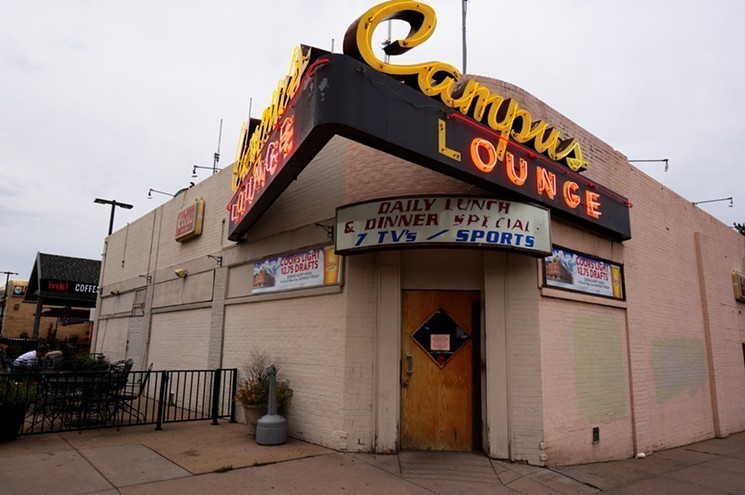 The Campus Lounge as it looked when original owner Jim Wiste sold it in 2016.
Westword
Recess Beer Garden has been up and running for four years at 2715 17th Street, and the ownership group is ready for growth. They're currently in the process of expanding Recess into the old Highland No. 5 Firehouse next door, which will also involve enlarging the outdoor beer garden. And the group purchased property at 1077 South Pearl Street more than a year ago, where they have plans to open "something more like a supper club," Olson adds, though that's still many months away.

The group's concept for the Campus Lounge space includes returning the back room to a game room with pool tables and arcade games for kids (just like he remembers from when he was eight years old), and adding a wilderness/camp-house theme throughout the main bar and dining room; a brief walkthrough revealed a dark paint scheme and wood paneling reminiscent of the old days when Wiste still ran the place. Along with a more ’70s vibe, the kitchen will serve an affordable steakhouse and sandwich menu that will be "along the lines of the Columbine Steakhouse, but with our own take on it," Olson adds.

"People came here for the nightly specials, like prime rib on Friday nights," he explains, "so we want 50 percent of our food sales to be daily specials." The menu will be overseen by Recess chefs Emmanuel Lakanu and Garrett Collins, who both are well-versed in creating casual food for bar-goers. Other plans include adding fourteen taps of local and domestic beers by the glass and pitcher, because a neighborhood bar needs pitchers of cheap beer.

The only thing still up in the air is the name; for legal reasons, the Recess group may not be able to use "Campus Lounge," but they plan on keeping as much of the outdoor sign intact as possible.

A new name and new management could be just what the Campus Lounge needs to survive through another fall.
KEEP WESTWORD FREE... Since we started Westword, it has been defined as the free, independent voice of Denver, and we'd like to keep it that way. With local media under siege, it's more important than ever for us to rally support behind funding our local journalism. You can help by participating in our "I Support" program, allowing us to keep offering readers access to our incisive coverage of local news, food and culture with no paywalls.
Make a one-time donation today for as little as $1.