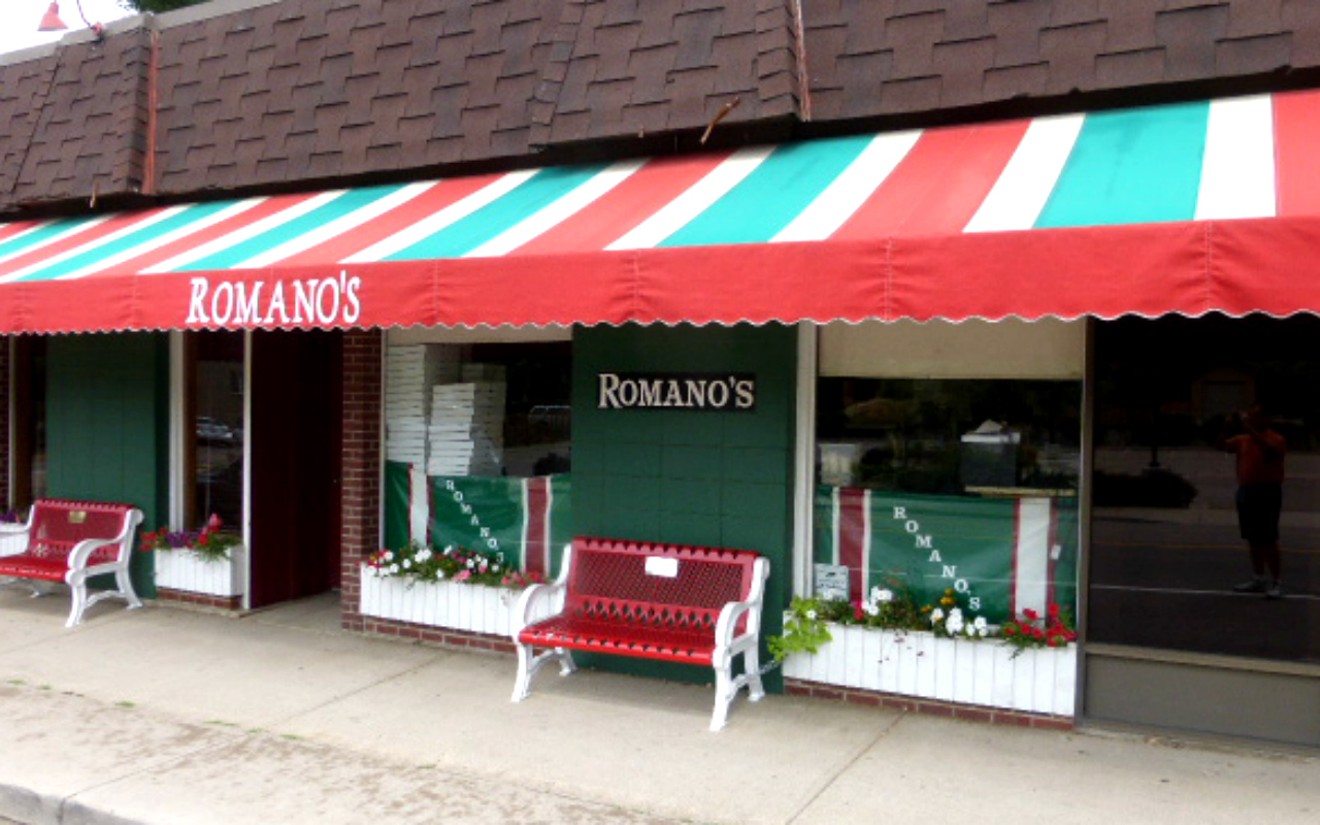 Romano's has been a fixture in Littleton for fifty years. Ken Holloway
Romano’s Italian Restaurant is the oldest Italian restaurant in Littleton; on December 1, it will mark fifty years at the same address, 5666 South Windermere Street. It’s not hard to see why this family-owned and -operated restaurant has attracted legions of loyal customers: It’s all about love, according to the Romano family.

Romano’s was founded by the husband-and-wife team of Neil and Ellie Romano — he a city boy from Manhattan with a background in restaurants, and she a farm girl from Minnesota. Theirs was an unlikely pairing, but the two ended up in Denver, where they met, fell in love, got married and opened the restaurant as a pizza joint with three tables. 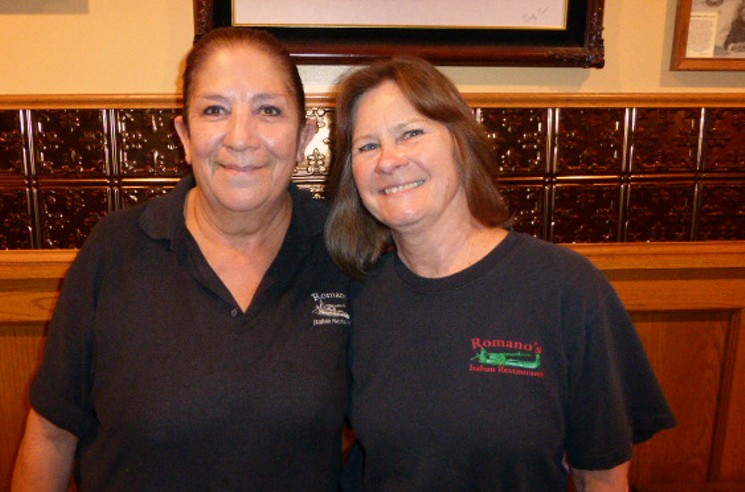 Gloria Villanueva (left) and Sharon Ducombs (right) have more than sixty years of working at Romano's between them.
Ken Holloway
The years went by, the menu was expanded (as were the four walls), and now the restaurant is run by the second generation of Romanos: brothers John and Nick and sister Sue Romano-Calhoun. And the third generation is already being represented by server Jordan Romano. Neil and Ellie were greatly loved by their employees and patrons, and continued to work there or visit daily until the end of their lives.

John Romano started working at his parents' eatery at a young age; it’s the only job he's ever had. Many teenagers got their first job at Romano’s, and that’s just one of the many reasons that Romano’s remains a landmark in Littleton. 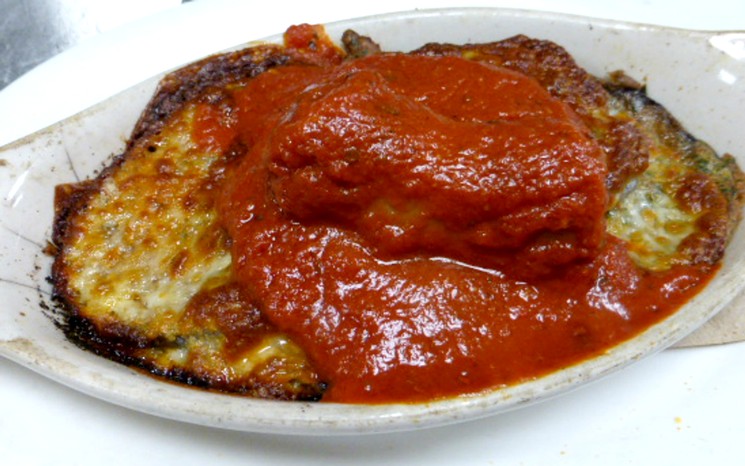 Romano's eggplant Parmesan sports a layer of the family's famous sauce.
Ken Holloway
Employees agree that working at Romano's makes them part of a close-knit family. Gloria Villanueva, for example, has been cooking the Romano family's classic recipes for 37 years, and server Sharon Ducombs has been serving these Italian favorites for 28 years. Her daughter, Sammie Ducombs, is a legacy; she's been working there for about ten years. Sharon says her love of Romano's stems from one thing: “The food is great, obviously, and that’s what keeps our customers coming back.”

From its early days, the menu has grown from brick-oven pizzas and calzones to a full range of northern Italian specialties — soups, salads, sandwiches, seafood, pasta and desserts. Romano's sells its amazing sauces to go by the pint or quart, and offers off-site catering services as well as banquet facilities at the restaurant.

The Romano family's original spaghetti sauce offers heady aromas and flavors, with a vivid color worthy of a magazine cover and a satisfying balance of richness, sweet and tangy tomato brightness and asupporting cast of herbs and spices. Sue says the secret to the great sauce, a recipe that Neil learned from his mother, Carmela, is in the garlic.

The employees all have their favorite dishes, ranging from baked lasagna with beef, sausage and cheeses to the seafood platter, spaghetti, eggplant Parmigiana and the Poor Boy sandwich stacked with ham, salami, cheese, lettuce, tomato and Italian dressing. 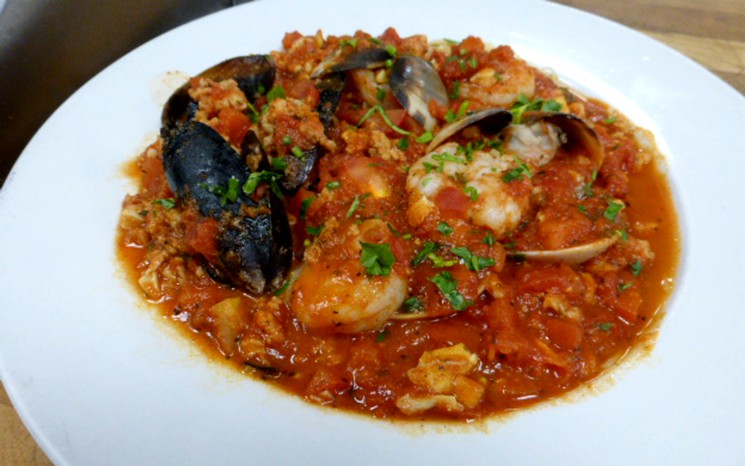 Favorites include the seafood platter over pasta.
Ken Holloway
Even the patrons consider themselves part of one big family. As Sue regaled me with the rich history of her family and the restaurant, I saw the appeal of the time-honored place with great food and great service from a staff that treats you like family (in a good way). In fact, I contemplated asking to be adopted (Sue and I are about the same age, so that would have been awkward), but I’m happy to simply join the family from the customer side of the equation.

If you want to be an honorary member of the Romano family, stop by the restaurant on Sunday, August 20, when a "thank you to the community" celebration will take place indoors and out from 4 to 8 p.m., with plenty of food served in Romano's parking lot, along with live music, family fun and a bouncy castle. This is part of Littleton's Western Welcome Week, and Romano's will break out its gondola float for the parade on August 19. Plans aren't yet set for the December 1 anniversary, but they're likely to include a community dinner with proceeds donated to a Littleton nonprofit.

The Romano family motto: “Every day we are grateful for la dolce vita — the sweet life we have found here.” Today that taste of the sweet life continues to be a part of Littleton, thanks to the vision of Neil and Ellie Romano. 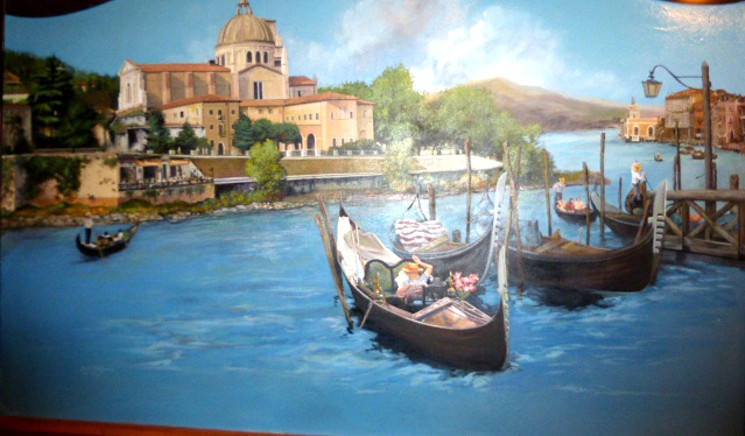 Wall murals depicting Italian scenes decorate the dining room at Romano's.
Ken Holloway
KEEP WESTWORD FREE... Since we started Westword, it has been defined as the free, independent voice of Denver, and we'd like to keep it that way. With local media under siege, it's more important than ever for us to rally support behind funding our local journalism. You can help by participating in our "I Support" program, allowing us to keep offering readers access to our incisive coverage of local news, food and culture with no paywalls.
Make a one-time donation today for as little as $1.