Saucy’s Southern BBQ Is Now Open in the University Neighborhood 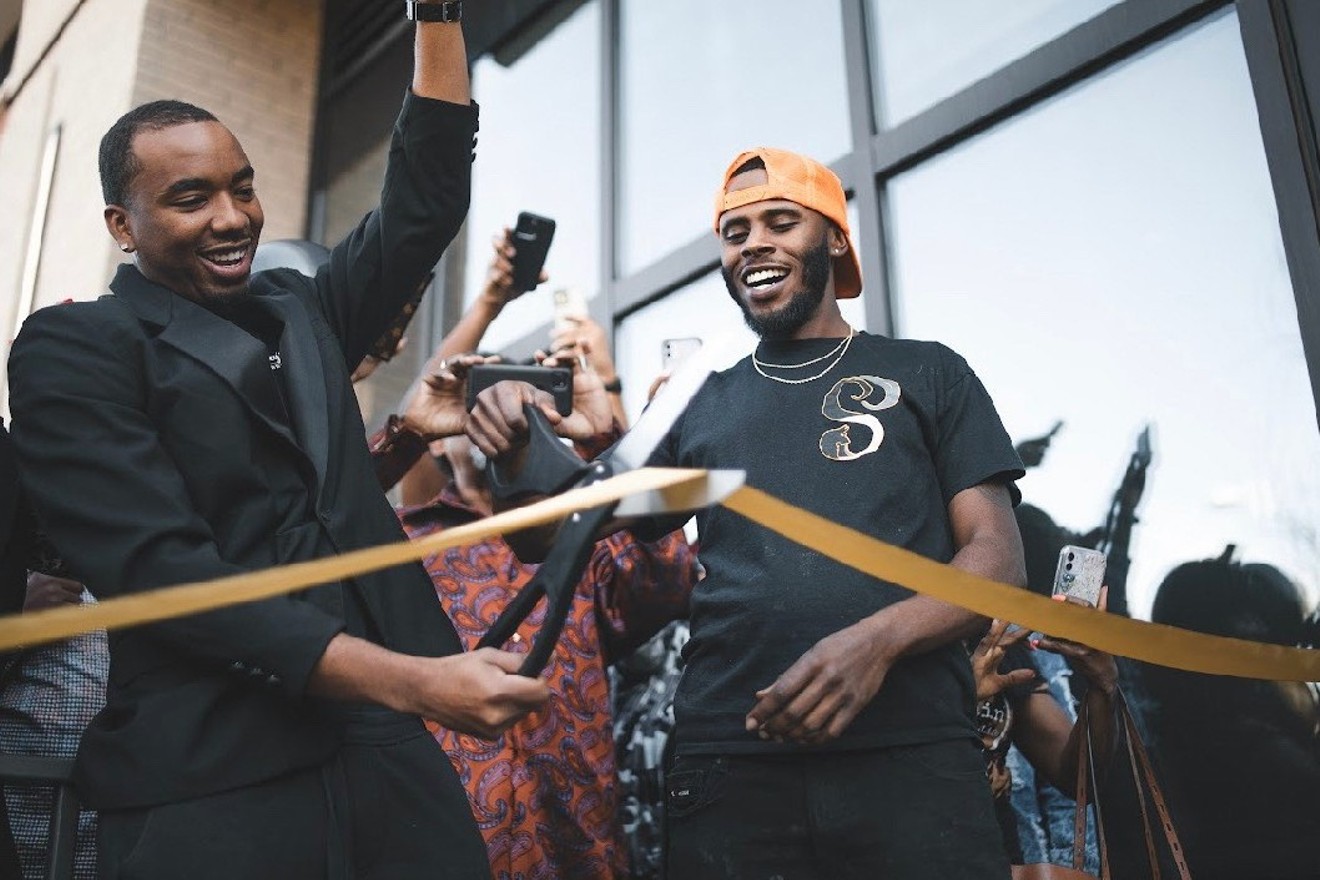 Co-owners Khristian Matthews (left) and Ki’erre Dawkins cutting the gold ribbon at the grand opening. Saucy's Southern
“The end goal was always a restaurant,” says Khristian Matthews, who co-owns Saucy’s Southern BBQ and Cuisine with his cousin, Ki'erre Dawkins. On October 1, the two celebrated the grand opening of their first brick-and-mortar, at the busy corner of East Evans Avenue and South University Boulevard. Many in the community came out to celebrate, including longtime customers who have been eagerly awaiting the event since March, when Matthews and Dawkins announced their plans to open the permanent location after operating as a food truck since 2018.

The truck operated outside of the Diego Pellicer Dispensary (now Frost Exotic Cannabis). Prior to entrepreneurship, Matthews worked at the location as a budtender, but he envisioned more. With a shared passion for cannabis, cooking and culture, he and Dawkins pitched Saucy’s Southern to the dispensary’s ownership. “It worked out,” beams Matthews. “They said yes, and we started cooking in a parking lot, consciously building our brand with ties to marijuana.”

The food venture’s success brought about a line of THC-infused sauces, including a honey-mustard wing sauce and traditional barbecue. More than twenty Colorado dispensaries now carry the products, which “sell just as quick as the food,” confirms Matthews. Retailers can be found from Boulder to Pueblo and include several shops that are just minutes from the new restaurant location, like Star Buds and Oasis Cannabis Superstore. 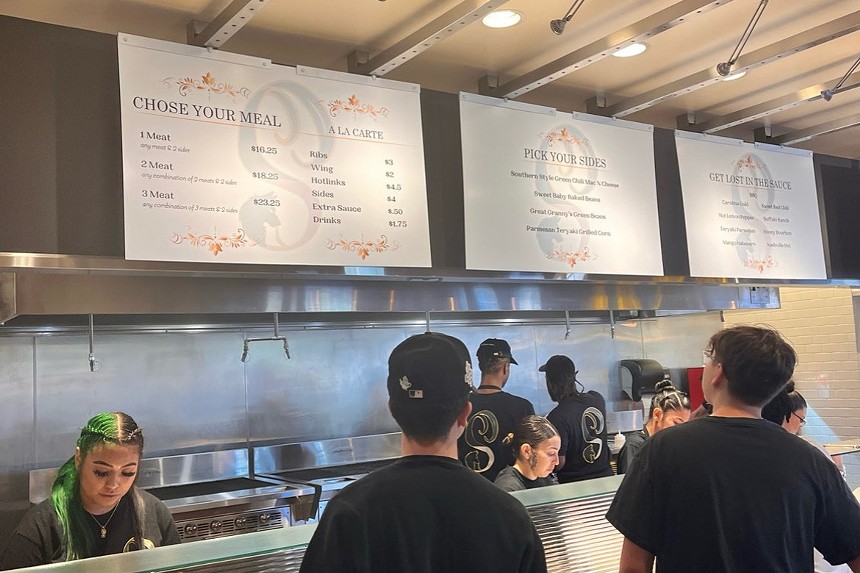 The quick-serve counter and Mississippi-style barbecue menu.
Saucy's Southern
Since it's located across from the University of Denver campus, Saucy’s Southern has partnered with the college, allowing students to purchase food using their meal plans. The location's proximity to the school is one of the reasons Matthews and Dawkins were drawn to it: It's a reminder of how they began cooking together.

“I first started cooking my sophomore year of high school,” says Dawkins, who comes from a line of talented grill masters. “My dad even got barbecue trophies. I think I got the inspiration from him, but I never actually had the chance to learn to cook under my dad."
Dawkins moved from Michigan to Mississippi in 2000, and met Matthews while the two were attending Mississippi State University. The cousins had grown up less than an hour away from each other but had never met. The chance meeting led to “a lot of tailgating and a lot of barbecuing,” Dawkins notes with a laugh.

“It’s a Southern thing! Over the grill — that’s how we have a good time," agrees Matthews.

Sharing Southern culture and hospitality has been their goal since the beginning. At the quick-serve counter, you’ll find nine housemade sauces alongside the classics: St. Louis-style spare ribs, grilled wings and Louisiana hot links. One-, two- and three-meat plates are available along with sides like green chili mac ’n’ cheese, baked beans, grilled teriyaki Parmesan corn and Great Granny’s Green Beans. For dessert, Saucy's Southern has partnered with Little Man Ice Cream, which is famous for its handcrafted flavors.
click to enlarge 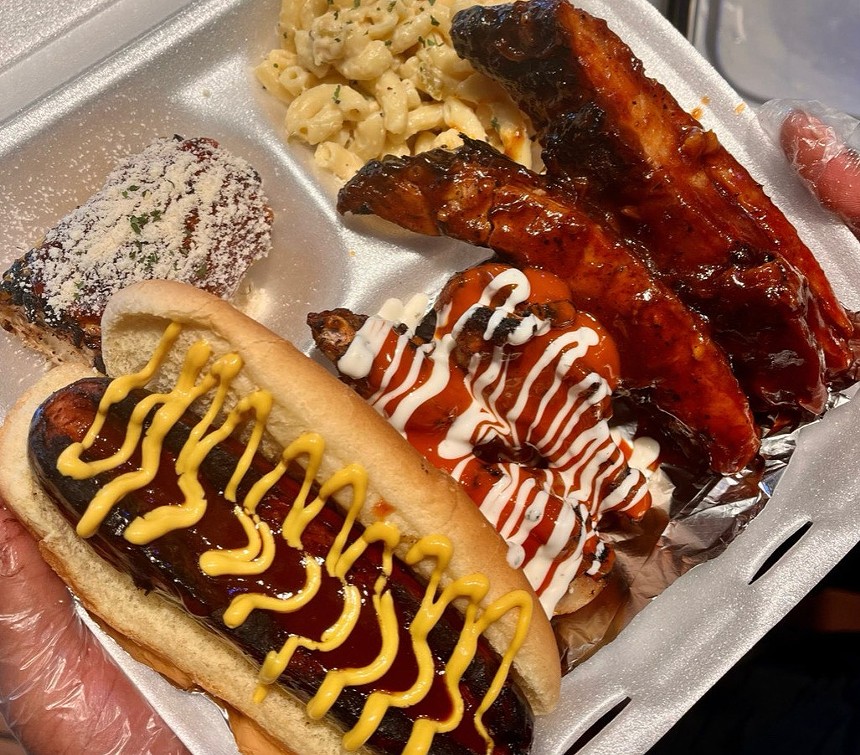 A hearty three-meat plate paired with savory sides.
Saucy's Southern
In the future, Matthews and Dawkins hope to bottle and sell sauces (without THC) and dry rubs at the restaurant, followed by wholesale dreams in big-box stores. Other ambitions largely circulate around Saucy’s Southern franchises throughout Colorado and other states that have legalized recreational marijuana, specifically California.

Their first interested franchisees are their employees, most of whom have been fans of the brand since the food truck days. “I think the most exciting part is having employees that are so excited to work for us,” remarks Dawkins.

From supporting employees to opening their first restaurant, success as business owners is no easy task. But the two “have been blessed to meet some great people along the way,” says Matthews.

Encouraging others to join their ever-growing community, Dawkins adds, “We’re offering that Southern-hospitality vibe. Come and feel at home.”
KEEP WESTWORD FREE... Since we started Westword, it has been defined as the free, independent voice of Denver, and we'd like to keep it that way. With local media under siege, it's more important than ever for us to rally support behind funding our local journalism. You can help by participating in our "I Support" program, allowing us to keep offering readers access to our incisive coverage of local news, food and culture with no paywalls.
Make a one-time donation today for as little as $1.