Somewhere in another state, someone is craving a Colorado masterpiece. Danielle Lirette
There's no shortage of Colorado-born burger bars: With Illegal Burger, Crave Real Burgers, TAG Burger Bar, Larkburger, Park Burger and Smashburger all based here, no cow is safe in this state. Even Red Robin and Good Times have local ties.

But meat lovers still crave the burgers of their home towns or the patty palaces friends insisted they visit while on vacation. Why, when there's such a glut on the meat market? It's that special sauce, or a shake of seasoning, or the way the grease drips down your chin, or those off-menu onions that are like a secret-society handshake for people in the know.

The latest burger intruder to get folks drooling is Shake Shack, the fast-expanding chain founded by restaurant mogul Danny Meyer in New York City in 2004 — as an actual hot dog and burger shack in Madison Square Park. Now with at least 100 locations in multiple countries, Shake Shack is coming to Denver sometime this year, and somewhere in RiNo. Here's the official word from the Shake Shack website:

Ain’t no mountain high enough! Shake Shack is trekking to the Mile-High City in late 2017. The Shack will be located in the RiNo Art District, a thriving creative community located just north of downtown Denver.

The RiNo Shack will offer all the Shake Shack classics, from delicious 100% all-natural Angus beef burgers and cage-free chicken to crinkle-cut fries and spun-fresh frozen custard. Plus, there will be frozen custard concretes featuring local Denver food purveyors.

The Shack will be constructed with recycled and sustainable materials. Chairs and booths will be made from lumber certified by the Forest Stewardship Council, and tabletops will be made from reclaimed bowling alley lanes from Brooklyn’s CounterEvolution.


Shake Shake could be just the start: Here are five more burger chains that have Colorado transplants biting their pillows while dreaming of their regional faves:

Displaced Portlanders dream of Burgerville.
Photo by Jessica Spengler/Flickr
1. Burgerville
Washington and Oregon
The first Burgerville opened in Vancouver, Washington, in 1961, and since then, every new outpost has been built in one of just two states. Portlanders love the locally owned burger chain for its dedication to Northwest ingredients and seasonal milkshakes, with hazelnuts, strawberries, pumpkin and other fresh produce coming from surrounding farms.

Chances of Burgerville coming to Denver: pretty slim. All forty or so outlets are located within an eighty-mile radius of the original.

If In-N-Out burgers ever see daylight in Colorado, we hope they leave the fries in Los Angeles.
Photo by Dakine Kane/Flickr
2. In-N-Out Burger
Los Angeles and the West Coast
Southern Californians love their In-N-Out, and if you disagree, they'll just tell you that you need to order your burger "animal style" to get an amped-up, off-menu version of the basic burger. Other than that, a good reason for all the love is that the chain is still family owned — by Lynsi Snyder, granddaughter of the couple who founded the company in 1948.

Chances of In-N-Out coming to Colorado: not as low as you would have thought even a few years ago. In 2011, the company expanded into Texas, and it now has distribution centers there and in Utah, making it easier to maintain the high standards of freshness in locations farther out from the mothership. 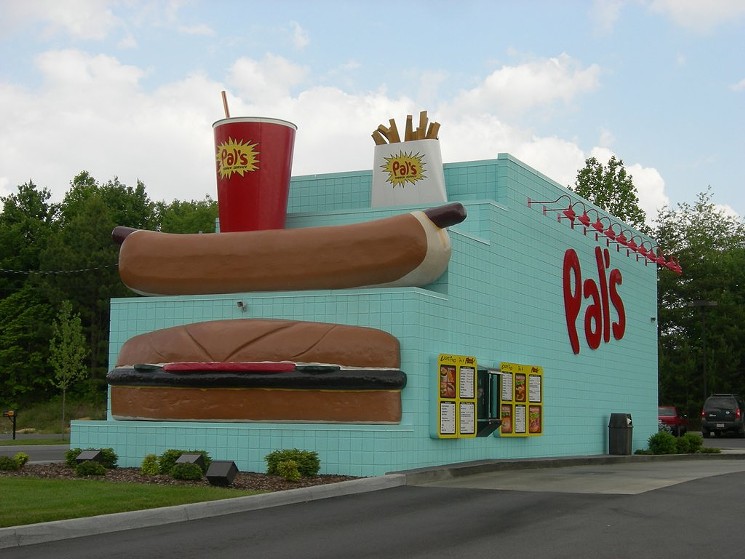 Pal's would look great in certain Denver neighborhoods.
Photo by pscf11/Flickr
3. Pal's Sudden Service
Tennessee
The name may sound modern and hipsterish, but Pal's — with giant fiberglass burgers and hot dogs decorating its aquatic-blue drive-through joints — has been a staple in Tennessee and nearby states since 1958. Southerners don't just love the food; Pal's is known for some of the best customer service of any fast-food chain in the country.

Chances of Pal's coming to Denver: highly unlikely. The company took more than fifty years to jump the border from Tennessee to Virginia, and seems content to stick with its home territory of northeastern Tennessee. Plus, the kind of kitschy nostalgia embraced by locals seldom travels well (though we think a Pal's would look great near the University of Denver or on Santa Fe Drive).

Whataburger fans salivate whenever they see orange and white.
Photo by Marcus Quigmire/Flickr
4. Whataburger
Texas and the South
Texas expats have fond memories of the broad, floppy hamburgers peddled by Whataburger, and the orange-and-white stripes of the chain's rooftops act as a Pavlovian bell to commence salivating. But if you want a Green Chile Double, you're going to have to drive a few hours to Albuquerque or Amarillo, because the company's spread has taken it mostly east of its home state.

Chances of Whataburger coming to Colorado: not out of the question. Rumor has it that there was once a Whataburger on Aurora's stretch of Havana Street, but that was decades ago. Still, the company is large and far-flung, with more than 700 outposts from Arizona to Florida. Dude...
Photo by Ben Britten/Flickr
5. White Castle
Midwest and East Coast
Face it: Nobody likes White Castle unless they're stoned. Which is why it's unfathomable that this chain, founded in Wichita, Kansas, hasn't hit Denver yet.

Chances of White Castle coming to Colorado: not likely. If it was going to happen, it would have happened by now.

What chains would you like to see come to Colorado?