The two had a similar philosophy and approach to beer in that they both loved to work with herbs and spices from around the world and to think of their recipes in terms of a larger culinary framework. Over the next three years, Moore and Tyler collaborated on several beers and special events before Intrepid (later renamed Next Stop Brewing) closed in May 2020, leaving Moore without a brewing job. In the meantime, Tyler opened a standalone restaurant and brewery for Spice Trade near the Denver Tech Center.

Moore's interest in ingredients from all over the world comes from his days working as a graduate student in archaeology in Turkey, Jordan and Greece. But it continued as he traveled the world, even culturing a yeast from Easter Island while he was on his honeymoon. He also earned a degree from the Siebel Institute’s Concise Course in Brewing Science before stints with Boulder Beer Company and 105 West Brewing. Some other beers he was known for at Intrepid include a basil IPA, a Turkish coffee stout and a lavender triple.

Spice Trade loves to pair its beer with food, including these Thai wings with its Thai spiced Tripel.
Spice Trade Brewing
After Intrepid closed, Moore and his wife moved to Bermuda for a few months, where he consulted with On De Rock Brewing, which was trying to re-establish itself after having closed because of the pandemic. After returning, he spent three weeks in Alaska, climbing Denali. Just before that, however, Tyler approached him about taking the head brewing job at Spice Trade. "We had several conversations and decided it was a good fit," Moore says. Tyler himself is now managing the entire operation at Spice Trade.

“Jeff and I have really complementary ideas about beer and what it can be and what it can taste like, and it's awesome working with a place with a full kitchen and incorporating the culinary aspect and that side of things into everything we do," Moore adds.


In addition to turning out some Spice Trade classics, like Chai Milk Stout and Thai Tripel, Moore and Tyler have been working with ingredients like chile peppers, annatto seeds and hibiscus. They also developed a limoncello-flavored hard seltzer to go with Spice Trade's current Italian offerings (the menu changes quarterly to feature a different cuisine).

"All the new stuff has been a collaboration between Jeff and I," Moore says. "It's nice to bounce ideas off someone who also has a strong culinary and beer background." 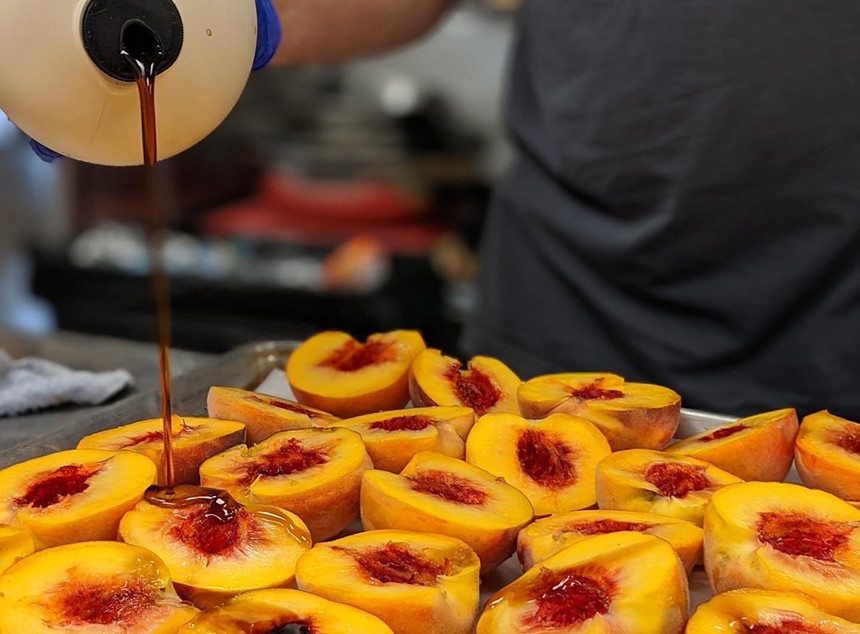 Palisade peaches get the maple syrup treatment at Spice Trade Brewing.
Spice Trade Brewing
One of the most exciting upcoming beers is a 10 percent ABV Scottish wee heavy that was brewed with peaches doused in maple syrup and then smoked over both Brazilian Amburana and Colorado peach wood. The recipe is a version of Moore's Hickory Smoked Peach Wee Heavy, which won a World Beer Cup medal for Intrepid Sojourner in 2018. The beer will be canned in limited quantities and will be the first in a series of small-batch canned beers that Spice Trade plans to release over the next year.

Several imperial stouts and a beer/wine "oenobeer" hybrid are also in the works. Moore is hoping to work more with local honey, too, along with carrots and tarragon — possibly in a couple of saisons, a style that he says is "underrepresented," adding, "It's a great style for taking on other ingredients, because the phenolics of the yeast play really well with spices and fruits and vegetables."

"I'm really excited to have him on our team," Tyler says. "He's a great brewer and...I'm looking forward to what creative things we can come up with next."
KEEP WESTWORD FREE... Since we started Westword, it has been defined as the free, independent voice of Denver, and we'd like to keep it that way. With local media under siege, it's more important than ever for us to rally support behind funding our local journalism. You can help by participating in our "I Support" program, allowing us to keep offering readers access to our incisive coverage of local news, food and culture with no paywalls.
Make a one-time donation today for as little as $1.