When Barbecue and Fried Chicken Mean Korean — not Southern — Cuisine Spicy pork ssam at Ssäm BBQ comes with a variety of leafy greens to add cool, crisp texture. Mark Antonation
Maybe the word “barbecue” just appeals to Denverites, or maybe Korean cuisine is finally earning some respect outside the growing Korean community in the metro area. No matter the reason, Korean restaurants are popping up all over town — and not just in hidden strip malls in the suburbs.

In this week’s Ethniche, we visited Hororok Mandarin Noodle House, at 12203 East Iliff Avenue in Aurora, which specializes in Korean soups, noodle bowls and fried rice influenced by Chinese immigrants who settled in Korea in the last century. But at Hororok, you won’t find grilled pork and beef loaded with salty, tangy, tongue-searing spices typical of popular Korean barbecues with tabletop grills that allow you to sear your own meat. For that you’ll have to go places like Seoul BBQ & Sushi, at 2080 South Havana Street, or Dae Gee, which got its start in Arvada before opening outposts at 827 Colorado Boulevard and 460 Broadway, both within Denver city limits.

Those who live a little farther east will be happy to know that Dae Gee owner Joseph Kim has taken on the competition in Aurora with a new restaurant at 1910 South Havana Street (in what was previously another Korean eatery, Han Kang) that just opened last week. And in the same shopping center, Angry Chicken Bar & Grill will soon be turning out Korean fried chicken (which is surprisingly hard to find in the metro area) in several heat levels in the former Whispers space, at 1930 South Havana. 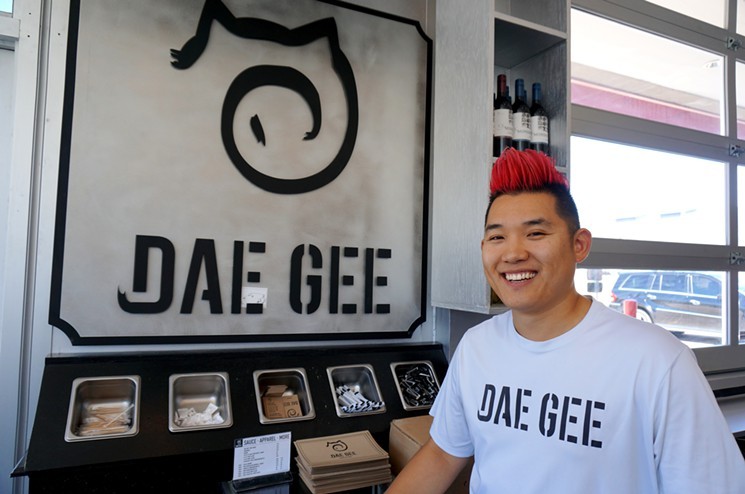 Dae Gee owner Joseph Kim at his Broadway restaurant.
Mark Antonation
Korean barbecue is also invading the heart of downtown: Ssäm BBQ is in the midst of its soft opening, with a grand opening soon to follow, at 1600 Champa Street, in the old Pho 79 spot. This isn’t your typical food court, though, since full bars — like the one at neighbor Diego’s Mexican Food & Tequila Bar — are part of the setup, and you don’t have to jockey in counter-service lines with your plastic tray.

Ssäm BBQ’s main offering is the namesake ssam, grilled meats (spicy pork, pork belly, bulgogi and galbi, in this case) wrapped in lettuce and served with ssamjang sauce and other condiments. The restaurant also offers rice and noodle dishes, soups that come simmering in hot stone bowls, and the iconic bibimbap, with a crust of rice that pops and crackles beneath julienned vegetables, soft slices of beef and an egg yolk.

For barbecue lovers, now is as good a time as any to take a detour from the Deep South for a taste of the Far East in Denver.