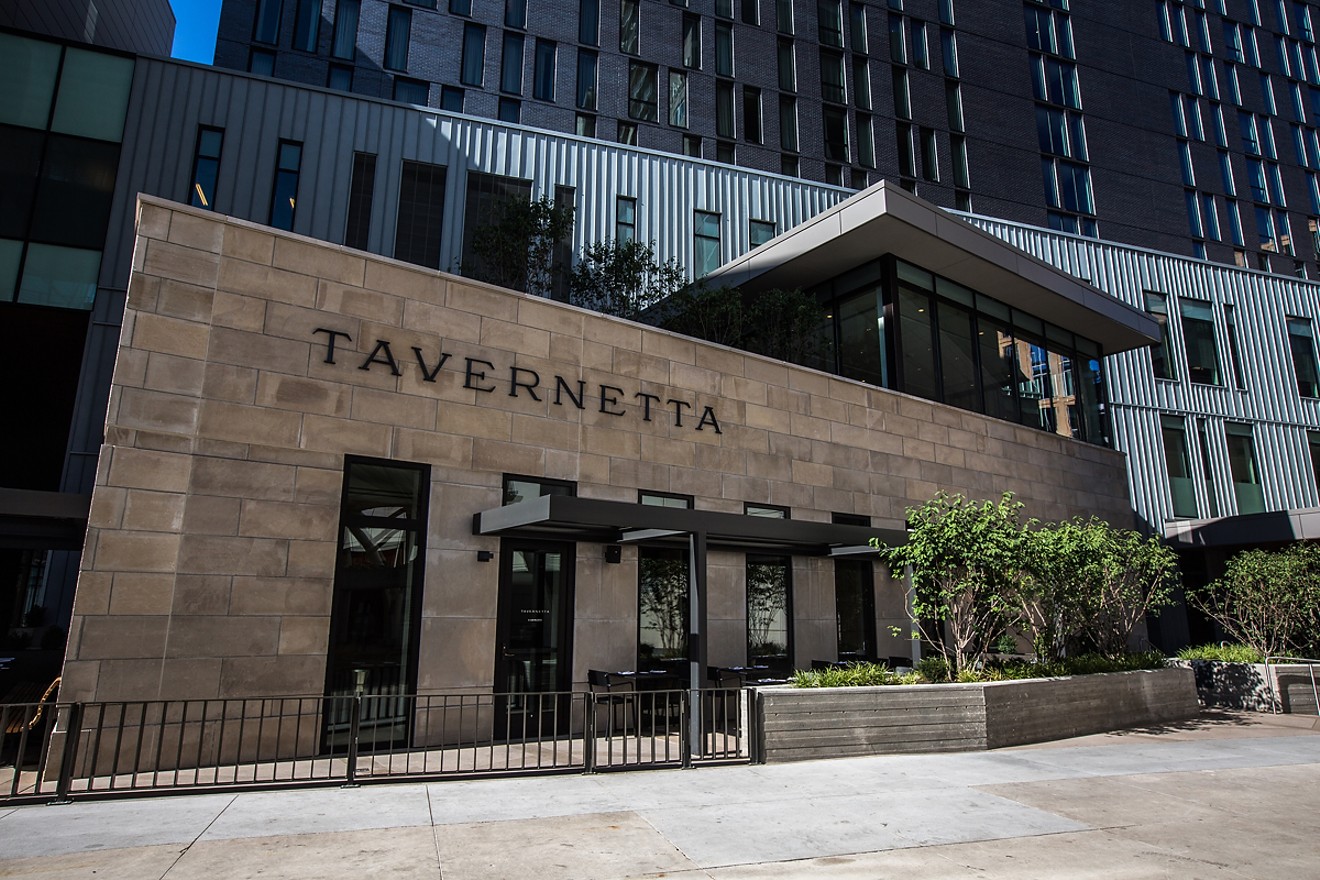 Surely this can't be Denver. Danielle Lirette
Standing in front of Tavernetta, the new Italian restaurant from Frasca Food and Wine owners Bobby Stuckey and chef Lachlan Mackinnon-Patterson, you almost wouldn't guess you were in Denver — despite being only a stone's throw from Union Station. New hotels and apartment buildings crowd in around the stone facade of the eatery (as if peering down to see what's on the menu) and a train platform stretches off into the distance. Surely this is the transportation hub of some major East Coast or European city, not our quaint Denver, where only a few years ago weeds and chain-link fences sprouted from a dirt lot where Tavernetta now stands.

Visionary forces are at work in this sector of downtown, and Stuckey and Mackinnon-Patterson are now a part of that, much as they were a part of revitalizing Boulder's restaurant scene when they introduced Friulian tasting menus to Pearl Street some thirteen years ago. After more than a decade of accolades garnered (including James Beard Foundation awards for Outstanding Wine Program in 2013 and Best Chef: Southwest in 2008), the two are debuting Tavernetta (1889 16th Street) — their first full-service restaurant since 2011, when Pizzeria Locale opened next door to Frasca — tonight, Wednesday, September 13. 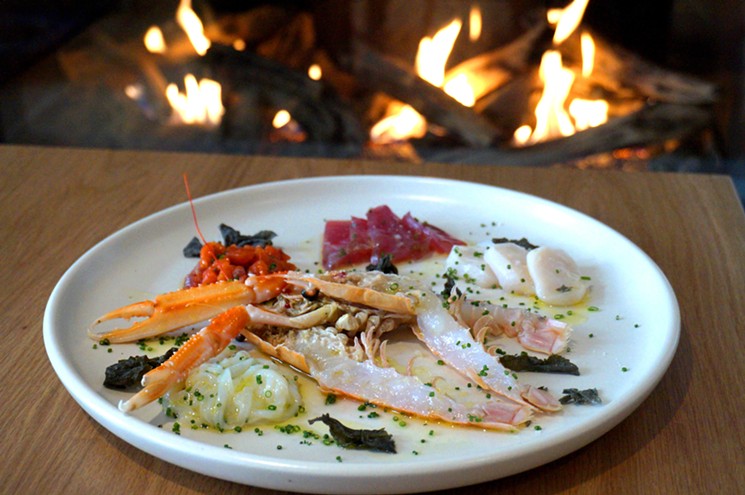 Crudi misti: raw langoustine, scallop, squid, tuna and salmon.
Mark Antonation
"In the beginning, I never thought I'd do another restaurant," says Stuckey, who admits that he's the most cautious among his Frasca colleagues. But he also realized that employees who have come up through the system over the years needed new opportunities, and that rather than lose talent to other restaurants, he'd rather give that talent a chance to shine in a new setting. And so the idea for Tavernetta was born. Stuckey, a master sommelier and front-of-house virtuoso, notes that the new restaurant was more than three years in the planning — even more considering that the team initially eyed opening inside Union Station well before the refurbished train station was unveiled to the public in the summer of 2014.

And Tavernetta certainly looks as if every detail had been planned for years, from the stone-and-mortar walls of the dining room, dubbed "the Grotto," to the woven upholstery covering smart little hassocks that serve as seating in the lounge area. In between the two rooms, there's an open kitchen with no real boundaries to demarcate where specific areas for guests and staff begin and end. So if you're seated at a community table right in front of the kitchen or in "the Eddy," a low-slung banquette with two round tables just off to the side, you'll feel a part of the intricate dance as servers and cooks swirl around each other with platters of seafood, bowls of pasta and groups of diners being ushered to various parts of the open, airy space.

Tavernetta's open kitchen blurs the lines between designated areas for customers and staff.
Danielle Lirette
Perhaps the best seats in the house (for those who prefer something a little more subdued, at least) are the lounge seats in front of the fireplace near the bar and host station. From there, you can look out onto the train platform or focus on your Venetian spritz, contemplating whether the olive bobbing in the bright-red cocktail adds just the right salinity to balance the bittersweet Aperol.

While Frasca is famed for its coursed-out tasting menus and deep wine list, Tavernetta is intended to be a little more casual, though Stuckey says staff training is as important — maybe even more so — now than it was in 2004. That's one of the reasons that longtime employee Peter Hoglund was promoted to partner and director of operations two years ago and that former Thomas Keller acolyte Justin Williams was brought in as general manager from his last gig at Bouchon in Beverly Hills. Along with chef Ian Wortham and wine director Carlin Carr, most of the team has come up through Frasca's training program, and even Williams signed on a year ago and has worked the floor at Frasca since then, while Tavernetta was being built.

The food of various Italian regions is the theme of the menu, from well-known ports of call like Venice to hidden gems like Trapani on Sicily's far shore. Wortham has taken time to travel through these regions in search of unique and interesting flavors, adapting them as needed for Denver tastes and available ingredients. So trapezoids of pasta known as straccetti, often served with mullet in their home country, are instead dressed with peekytoe crab, cherry tomatoes and sweet corn. Carpaccio alla Cipriani stays truer to the original as invented at Harry's Bar in Venice, with a sheet of beef tenderloin pounded tissue thin and topped with Parmigiano-Reggiano and aioli.

Tavernetta's lounge area is a little more sedate than the tables closer to the kitchen.
Danielle Lirette
click to enlarge

Tavernetta's main dining room, known as the Grotto, That's real stone and mortar.
Danielle Lirette
What else will you find? A private dining room tucked behind a glassed-in wine room, a patio spilling out onto the railway platform, and more outdoor seating facing 16th Street. While Tavernetta is not officially part of the Kimpton Hotel Born next door, the main dining room knifes under the hotel on the ground floor, so even though the main entrance and most of the restaurant are tucked away out of street view, that second patio and a rear door are evidence that you're close. But if you're coming via light rail, the big Tavernetta sign facing Union Station is beacon enough.

Lunch and dinner will both be served, so travelers and businesspeople can find reprieve from a busy day inside Tavernetta beginning at 11 a.m. A happy hour will run from 3 to 6 p.m. daily, and dinner will be served until 10 p.m. Sunday through Thursday and 11 p.m. on Friday and Saturday. Reservations can be made by calling 720-605-1889 or visiting the Tavernetta website. For more photos, see our complete Tavernetta First Look slideshow.