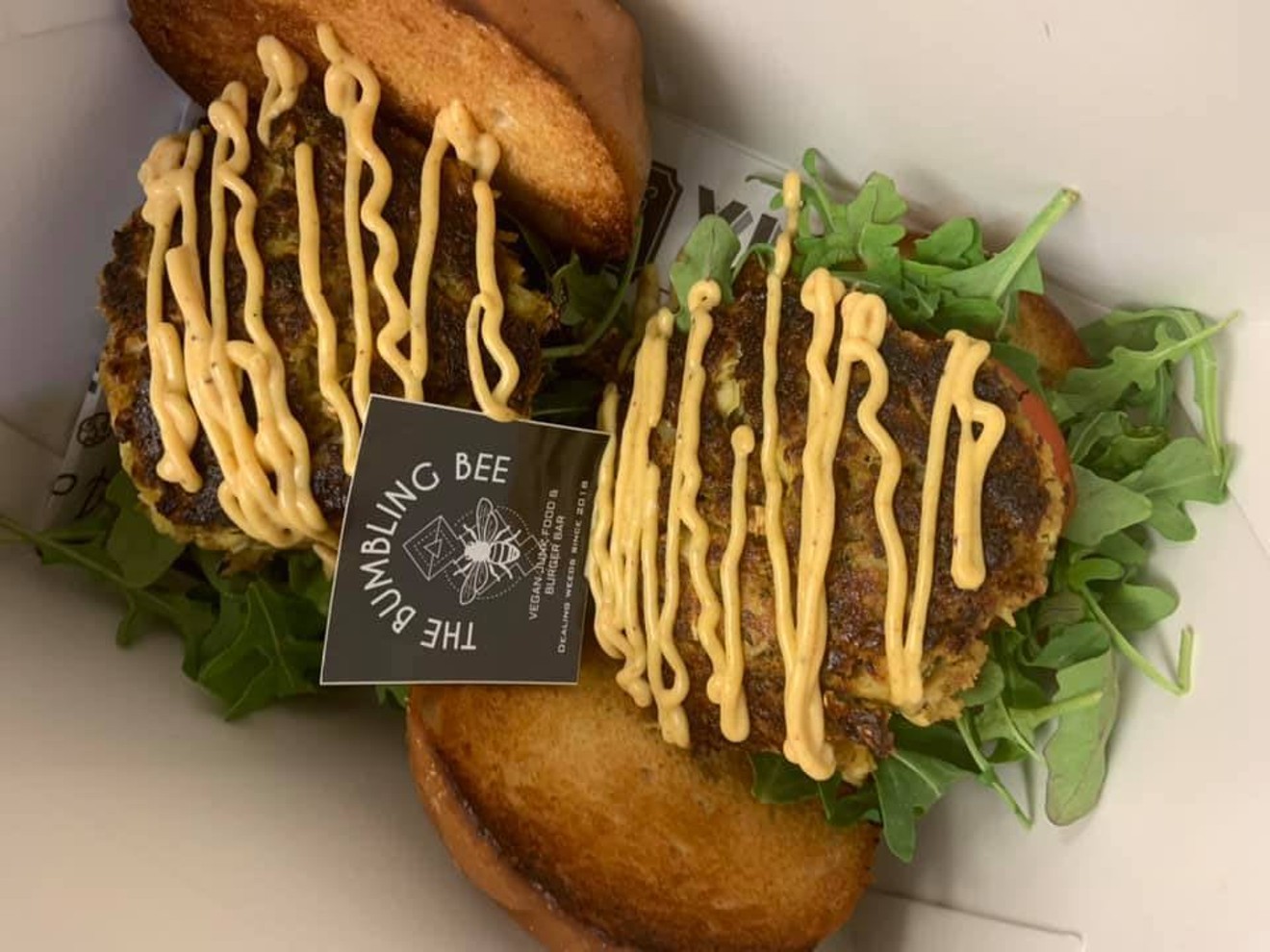 The Bumbling Bee
Editor's Note: Restaurants continue to adjust as coronavirus information becomes available. As of Monday morning (March 16), the Bumbling Bee is open for its regular business hours, but is also implementing curbside pickup and delivery. Visit the restaurant's Facebook page for updates.

The Bumbling Bee, located at 1100 28th Street in Boulder, wants to crush the myth that vegans eat only twigs and berries, says owner Cassandra Ayala.

In fact, with options such as a burger topped with melted cheese and sandwiched between glazed doughnut halves, and Salisbury “steak” nestled atop a bed of cheesy garlic mashers and smothered in poutine gravy, it’s safe to say the Bumbling Bee is the opposite of what people think of when they think vegan food.

“Everything is familiar, everything is tasty,” says Ayala, who opened the Boulder location with her three grown daughters.

Crab cakes are made with hearts of palm and artichoke, topped with an Old Bay sauce and served with seasoned fries. For breakfast lovers, an "everything" bagel is loaded with a sausage patty, Just Egg, hash browns, peppers, aioli and Monterey Jack cheese sauce.

One of the most popular items is the “mind-blowing” (as Ayala describes it) Mother Clucker, a crispy Southern fried-chicken sandwich that the owner says is made with a “secret method” of double-dipping a Gardein patty. The sandwich is topped with a house aioli, creamy coleslaw and pickles.

Ayala describes the restaurant’s burgers as memorable and definitely craveable — “something you can’t get anywhere else,” she adds.

The Boss barbecue burger is topped with seitan-marinated bacon, onion rings and barbecue sauce. On the side, loaded poutine fries are topped with gravy made with caramelized leeks and onions, mushrooms and red wine. “Our goal is building flavors, not cutting corners,” Ayala notes.

Ayala's family started the Bumbling Bee as a food truck in Virginia Beach, Virginia, in 2011 before expanding to a brick-and-mortar location in the same town last September, then making it a cross-country duo with the new Boulder branch in January. “Boulder has embraced us with open arms,” Ayala states.

She points out that the menu isn’t just great for vegan eaters, but for anyone who's herbivore-curious, "or just going out with a group of friends,” she adds.

The Bumbling Bee is located at 1100 28th Street in Boulder and is open from noon to 8 p.m. Wednesday and Thursday, noon to 9 p.m. Friday and Saturday, and noon to 6 p.m. on Sunday. For more information, call 303-353-9199 or visit the Bumbling Bee website, which also includes GrubHub online ordering.
KEEP WESTWORD FREE... Since we started Westword, it has been defined as the free, independent voice of Denver, and we'd like to keep it that way. With local media under siege, it's more important than ever for us to rally support behind funding our local journalism. You can help by participating in our "I Support" program, allowing us to keep offering readers access to our incisive coverage of local news, food and culture with no paywalls.
Make a one-time donation today for as little as $1.
Kristen Kuchar is a Colorado writer covering craft beer, food and travel. For Westword, she explores vegan dining and the state's artisan beverages, such as cider and mead.
Follow:
Twitter: @KristenKuchar
Instagram: @kristen_kuchar/