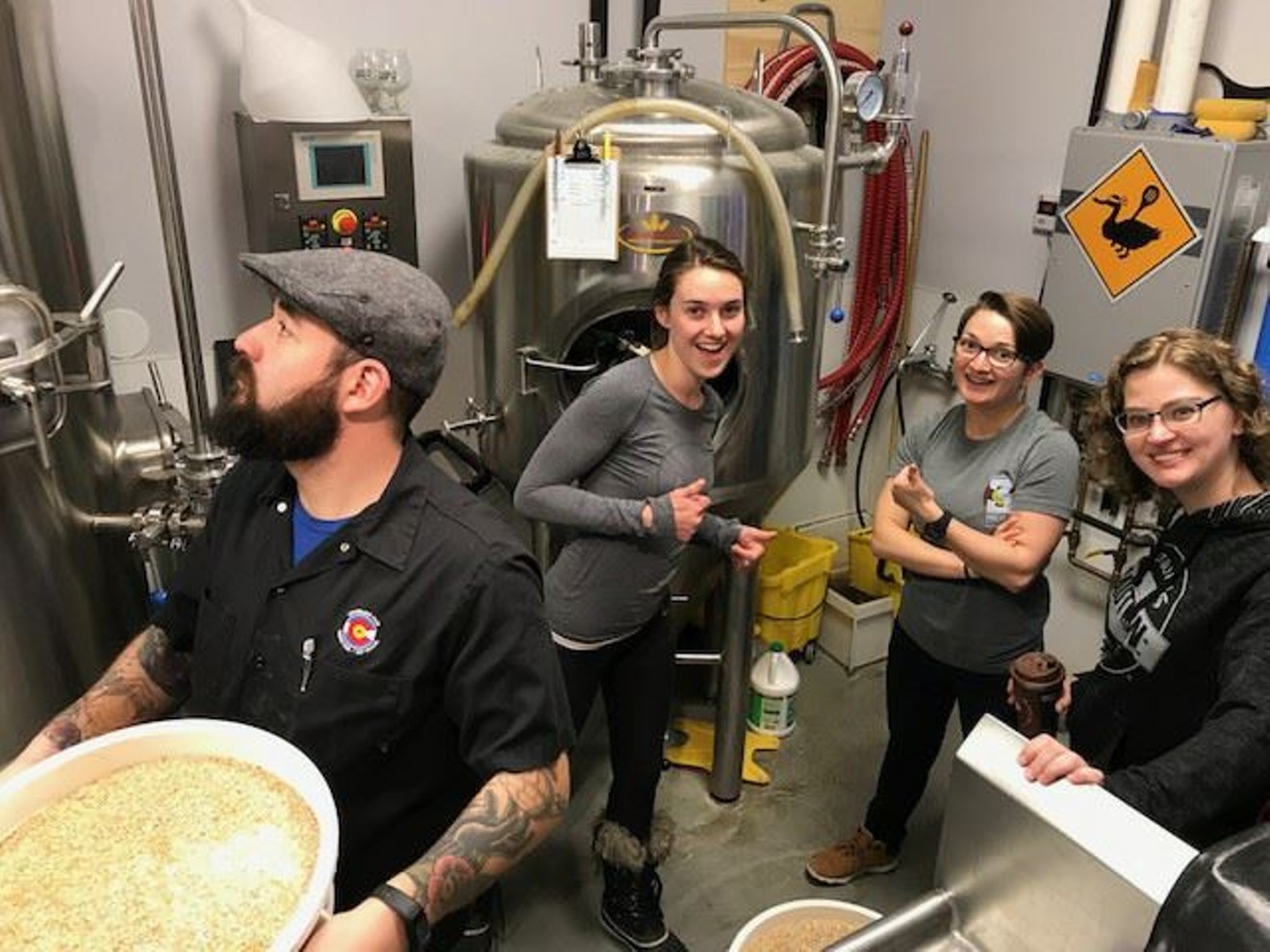 The brewers behind the latest iteration of Makin' Noise: A Pussy Riot Beer, at Caution Brewing. Caution Brewing Facebook page
When Kelissa Hieber and Bess Dougherty first began talking about Makin' Noise: A Pussy Riot Beer, it was as a way to help support women and GLBTQ causes and to stand up for all of the people who are underrepresented or belittled and who are in danger because of the Trump administration's ideas and policies. To create the project, they gathered female brewers and brewery employees and supporters from around the Denver area and came up with the idea to brew five different beers at five breweries and then donate some of the money to charity.

The initial tappings, on Inauguration Day in January, were wild success stories, making for standing-room-only nights and raising more than $7,000 for nonprofits like Planned Parenthood, One Colorado and the ACLU.

Afterward, says Dougherty, a longtime local brewer, "we had a bunch of brewery friends reach out to say that they would have loved to have participated, but didn't because they didn't want to intrude on the female-only idea." But the issues that Hieber and Dougherty support aren't just gender issues, Dougherty says; they're community issues. "And so we realized we could have a much bigger impact if we included more of the community."

As a result, the organizers have decided to hold three more Makin' Noise tappings throughout the year — one every quarter — and have thrown it open to any brewery that wants to participate. They are limiting each event to seven breweries, however, to keep the project manageable: two very small businesses and five larger ones.

Spangalang is one of five breweries participating in the event.
Spangalang Brewing Facebook page
The second event, Makin' Noise V2, an Earth Day Tapping, takes place Saturday at noon at five different breweries. Each made a distinct rye beer, the sales of which will raise money for an Earth-related nonprofit; $1 from every pint goes to charity. Goldspot Brewing will donate to Protect Our Winters; 3 Freaks will give to Sierra Club Rocky Mountain; Renegade is raising money for Denver Urban Gardens; Spangalang Brewery to the San Rafael Community Garden; and Caution Brewing to Groundwork Denver.

"Doing this for Earth Day was a no-brainer," Dougherty says. "That should be a non-partisan issue, at least for brewers, because we need good water to do what we do. We are keeping it local, and the money will be coming back to the people in our world who need it the most."

A week later, on April 29, Colorado Plus Brewpub in Wheat Ridge and Southside Bar & Kitchen in Denver will each host tap takeovers where they'll pour all five of the Makin' Noise beers (at 11 a.m. and 6 p.m. respectively). On May 20, the Jailhouse, a craft-beer bar in Buena Vista, will host a third Makin' Noise tap takeover.

The next Makin' Noise tappings will take place on July 19 — and there are already seven breweries participating. The final one for 2017 will be on October 19 (and there is only one spot left).