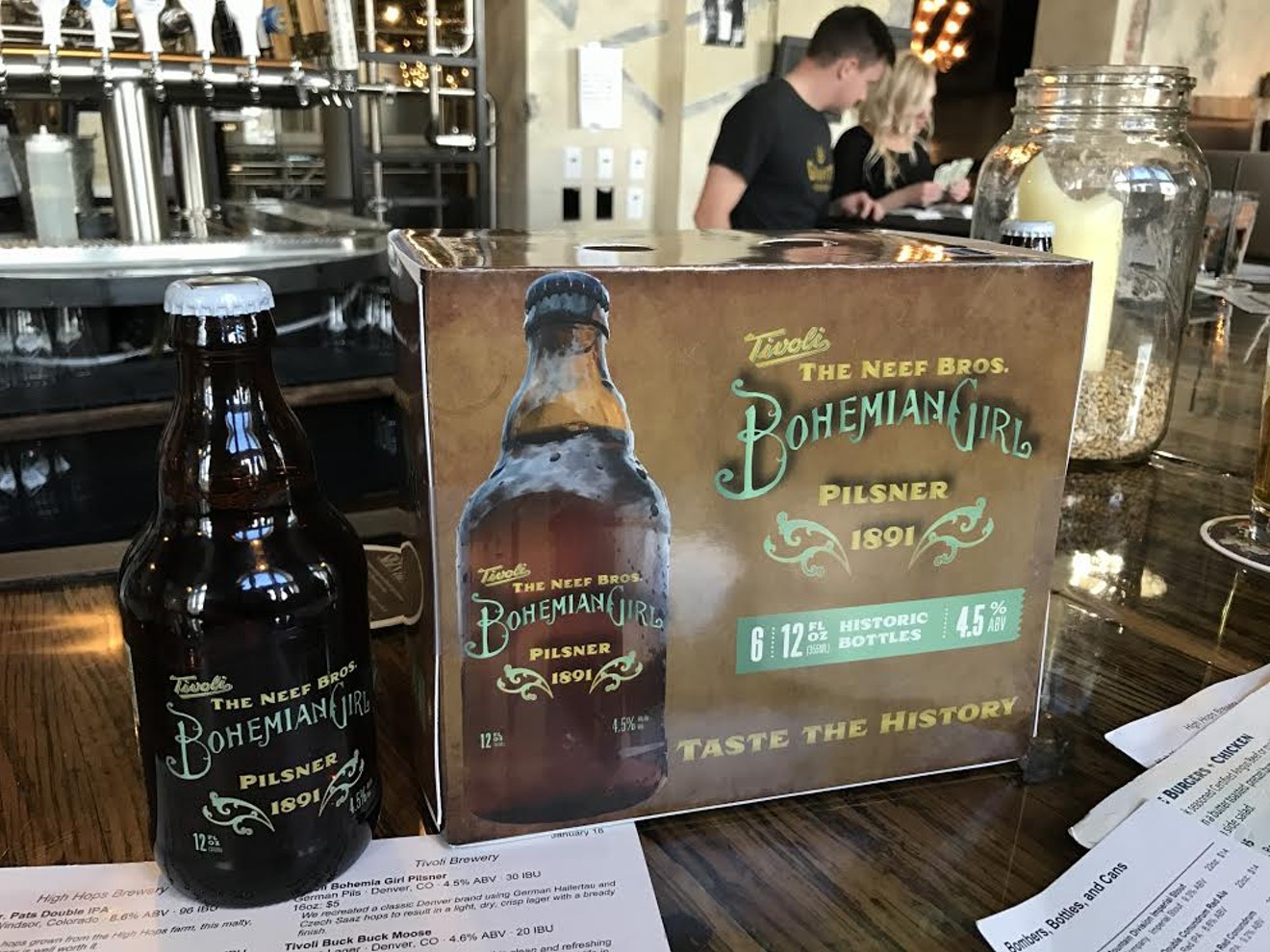 Tivoli Brewing brings the past alive. Jonathan Shikes
Tivoli Brewing, which has looked to historic beers for most of its fermented inspiration over the past few years, has jumped into the future in 2017. Not only is the brewery planning to open a high-profile location inside the Westin Hotel at Denver International Airport this fall, but hit's added a plethora of new beers to its bottled portfolio, most with modern twists and ingredients. And like its behind-the-scenes equipment — a sleek, state-of-the-art, four-vessel brewing system that is tucked in, under and around the 1890s-era brew kettle and infrastructure inside the Tivoli Student Union Building — the beers and bottles mix history with the latest innovations.

Founded in 1900 (though the company's history dates back to 1859), Tivoli was reborn in 2012 when Corey and Debbie Marshall acquired the expired trademarks to a dozen or so historic Denver beer names from now-defunct breweries. They began making beer at Prost Brewing, and then, in a stroke of historic luck, were able to open their own brewery inside the original Tivoli building, now the student union for the Auraria campus. The Marshalls even incorporated the original two 250-barrel, copper-plated kettles into the brewhouse decor. 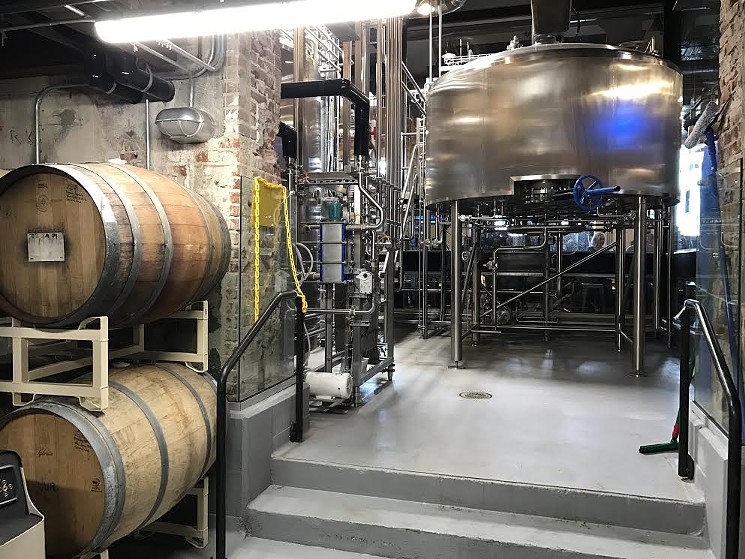 Tivoli's equipment is contained within the original brewery's infrastructure.
Jonathan Shikes
Since then, Tivoli has been turning out updated and reimagined versions of old German-style recipes, including the original Tivoli Beer, a 5 percent ABV Munich-style helles lager first brewed in Denver in 1859; and Sigi’s Wild Horse Buck Beer, a 6.7 percent brown ale that was brewed as a lager. But Tivoli is making new beers as well.

"We had always planned to brew new beers," Corey says. "Most of the old-school recipes are not documented, so if we don't have a very good understanding of the historic recipe, we go overboard to the future with the recipe. There's no sense in messing around; we might as well go all the way." 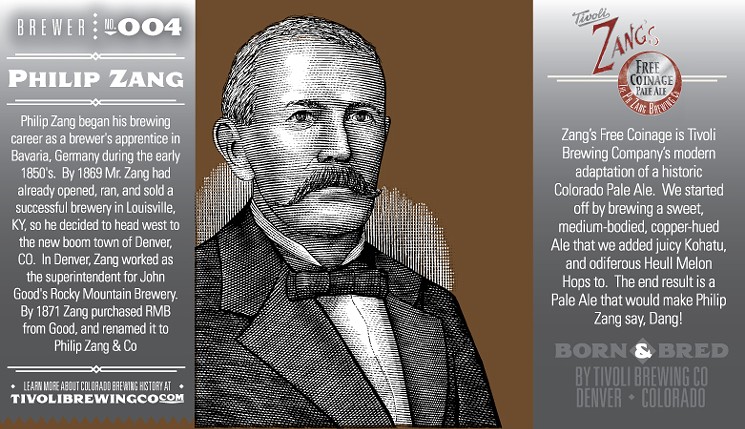 Tivoli
All of the beers, both old and new, will be rebranded and bottled over the course of 2017, some with pictures on the labels of Denver’s original brewers and little history lessons about who they were and what they brewed.

“We are all about history of brewing in Denver and Colorado, but we are also about educating future brewers," Corey says, adding that the brewery, as part of its move into the student union building, has partnered with Metropolitan State University of Denver to create a brewing-education program that will teach students "all about where we came from as an industry and also where the industry is going. 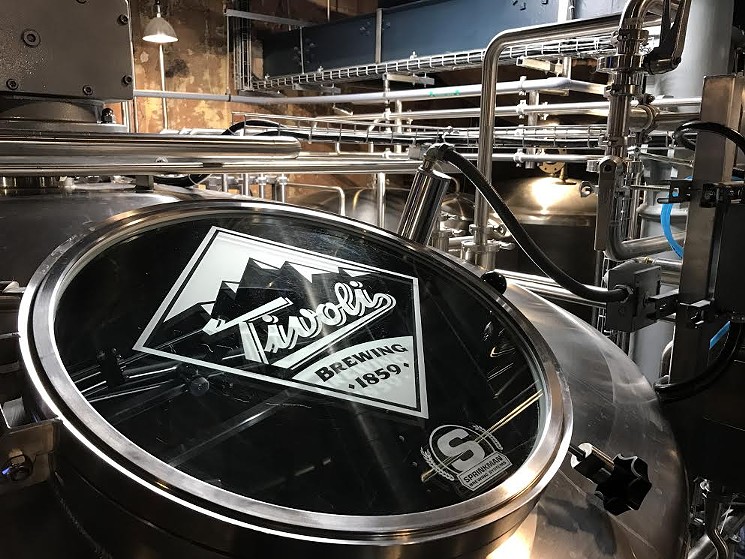 Tivoli, Sigi’s and Bohemian Pilsner, a 4.5. percent ABV lager originally made in 1891 by Denver’s Neef Bros, were the first to be packaged in the brewery’s unusual new bottles, which also blend the past and the present. Their stubby design was first used by the original Tivoli during the middle of the previous century and was patented by bottle-maker Owens-Illinois, which resurrected it this year just for the remade Tivoli. The beers are all sold in six-packs, which are wrapped in cardboard depicting more of the old-style imagery. 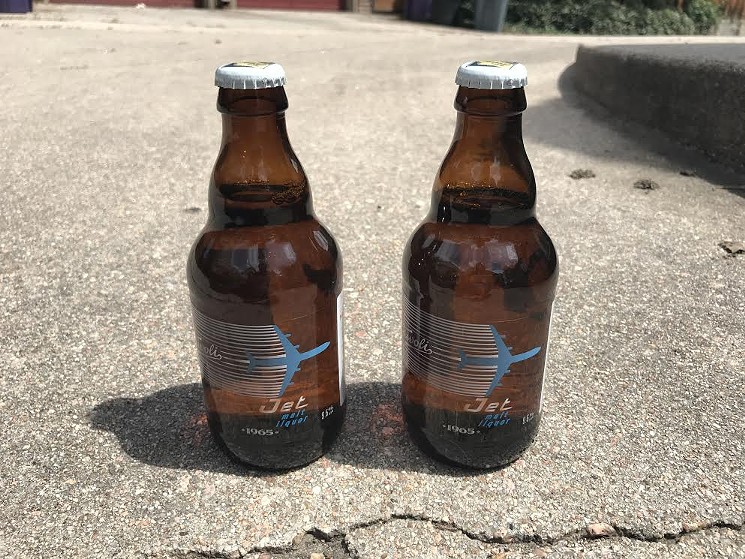 Jet Malt Liquor is already on the streets.
Jonathan Shikes
Then came the 9.5 percent ABV Jet Malt Liquor. Yes, that’s right, a malt liquor, but it’s not what you’d expect. The recipe has been upgraded and updated from the Jet Malt Liquor that Tivoli made in the 1960s (and sold in quart bottles); it’s now made up of pilsner malt, 6 row malt, corn grits and Pacifica hops. 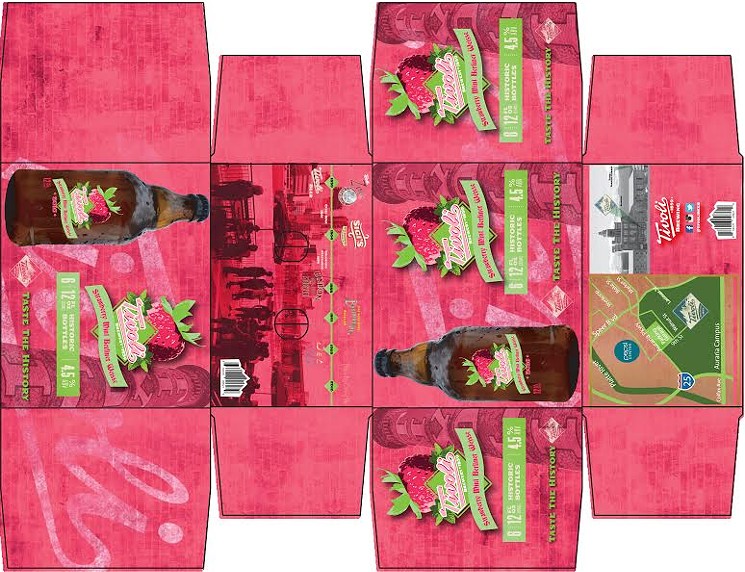 The packaging for Strawberry Mint Berliner Weisse.
Tivoli Brewing
“We’re not pretending these are historic beers,” Marshall says. “If we can reproduce an old recipe, we'll do it, usually with a modern twist. But if we want to make something else, we use modern ingredients and do it in a way that reflects what’s going on now.” This fall, Tivoli will release Marzen, Red Alt and Hoppy Buck Beer.

Another unusual point about Tivoli is that all of its beers are either lagers or were brewed using lagering techniques and temperatures and a specific kind of yeast called alt yeast. Most craft breweries focus on ales, which use top-fermenting yeast and can be brewed more quickly. Lagers are much less common in craft breweries and require their own specific bottom-fermenting yeast, cold temperatures and long periods of time to ferment.

"A lager can do everything an ale can do," Marshall says, noting that he thinks they are more refined than ales. "We've proven that. We really think we are taking lagers to the next level." 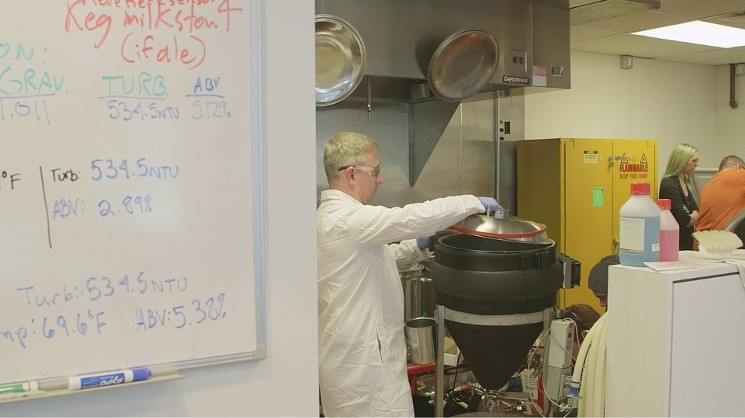 This screen-cap from a video produced by MSU Denver shows the brewing program in action.
MSU Denver
This fall — if things go according to plan — Tivoli will take its lagers to a much wider audience when it helps open Tom's Urban Kitchen & Brewery (which is a working name), in conjunction with the company that owns the Tom's Urban and Smashburger chains, and some out-of-state airport vending companies. The brewpub will be located on the fifth floor of the Westin hotel at DIA, just a few yards from Jeppesen Terminal.

The conglomeration of companies won the contract in March 2016 and had planned to open in May 2017, but since the deal also includes several hamburger locations inside the airport, the companies have focused on those.

When it does open, the brewery will operate a three-barrel system and make an IPA specifically for the airport — one that will be designed and brewed by students in Metro's brewing-education program.