Jared Polis on the Marijuana Big Thinker Talks, Trump and the Cannabis Caucus 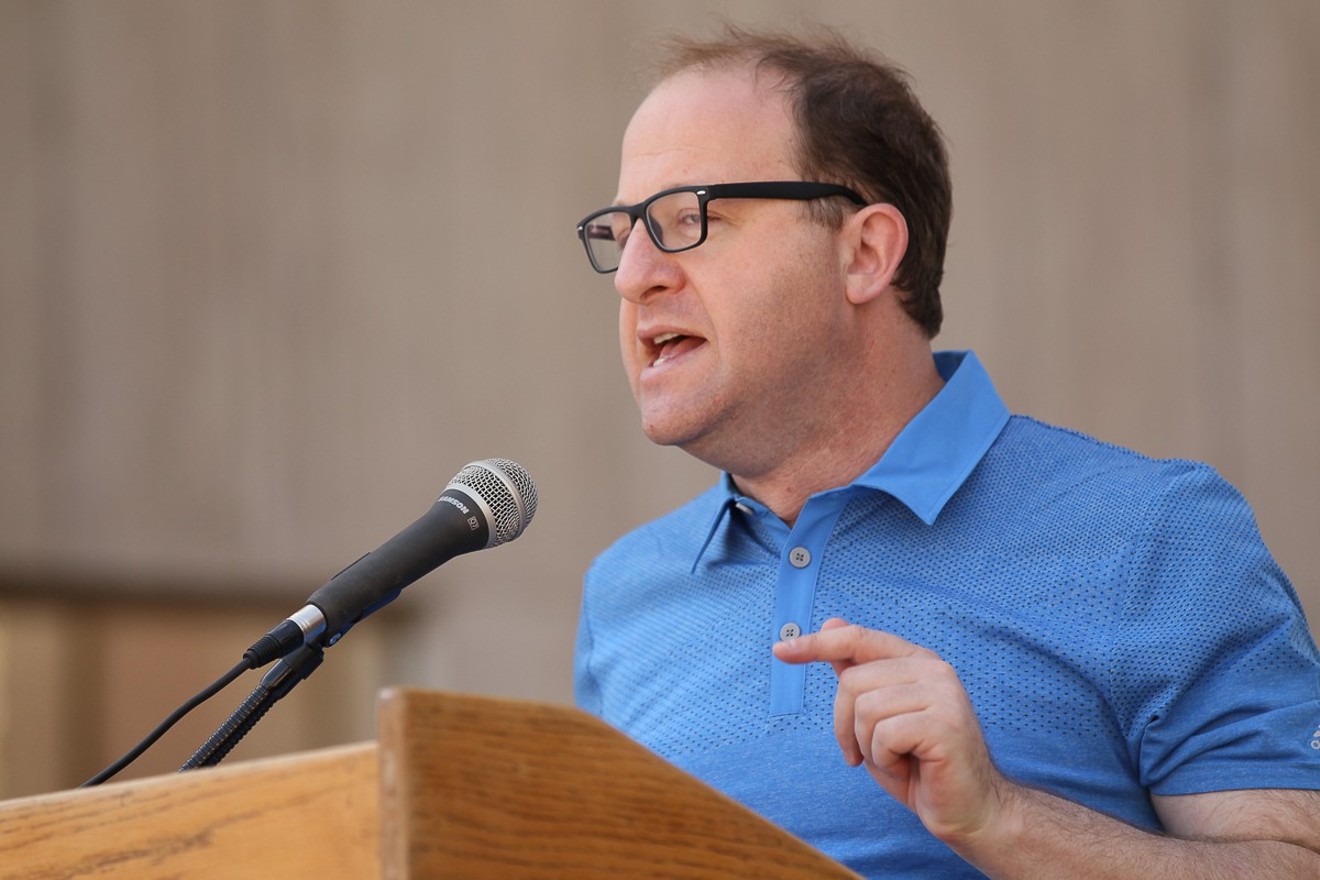 Representative Jared Polis addresses a Denver crowd on April 15. Brandon Marshall
In a ground-breaking move, Representative Jared Polis brought medical experts, advocates, attorneys and scientists to Washington, D.C., on May 3 for the Marijuana Big Thinker Talks. In announcing the gathering, Polis said he wanted to take the knowledge that's accumulated in Colorado and other states with legalized cannabis to lawmakers, in hopes they can "use these discussions as a resource to understand the legitimacy of the cannabis industry."

We caught up with Polis after the event to discuss legalization efforts across the country, his work in Congress, and the Trump administration.

Westword: How did the Big Thinker Talks go?

Jared Polis: Really good. I mean, you know we're really making history to have a real official event in the United States Capitol featuring marijuana big thinkers, including a lot of great thinkers out of Colorado.

There's been a lot of talk about what impact Trump will have on the industry, but it seems like the increased federal scrutiny has actually created more opportunities for Congress to be more vocal.

It really has. We have a bi-partisan Cannabis Caucus that I co-chair that is holding a number of briefings. To think that we're at a day and age when the United States Congress can get a briefing on marijuana business 101, or marijuana and veterans and healthy living...it really shows how far we've come.

You've been an advocate for a long time. Have you seen a switch in the number of your colleagues who have come around and approve of legalization?

Well, what we've seen a switch in is the number of states that allow it. Colorado is really a trendsetter in allowing the recreational sale of marijuana. It's now joined by a number of other states. Right now, over 60 percent of Americans live in a state where they have access to either medical marijuana or recreational marijuana.

The new federal budget proposal was released this week, and there's a protection for marijuana that prevents the attorney general from spending money on interfering in states that have legalized cannabis. What do you think about that?

Yes, we were able to successfully fight to include language in the omnibus...to prevent federal resources from being used to go after marijuana users.

Do you think that you'll be able to work with Congress to put forth some kind of regulation or protection, despite the Trump administration?

Yes, I'll continue to push for an amendment I sponsor with my colleague, Mr. [Tom] McClintock of California. It's a bi-partisan amendment — I'm a Democrat, he's a Republican — and it'll extend the prohibition on uses of funding to make sure the federal government cannot go after states with legal recreational marijuana like Colorado.

What do you think is the number-one issue Congress can help the industry with?

First of all, we need a comprehensive approach, which is why I introduced my Regulate Marijuana Like Alcohol bill that transfers jurisdiction over marijuana from the DEA to the Bureau of Alcohol, Tobacco and Firearms, so it's dealt with more like other controlled substances like tobacco and alcohol. In the meantime, we need to pass the Polis-McClintock amendment that would make sure the federal government couldn't use the limited law enforcement resources we give them to go after people who are doing fully legal activities in states where it's legal.

Many feel that's more important now than ever.

Absolutely. In the face of uncertainty about what side of the bed the attorney general will wake up on on any given day, it's important to have these protections and laws for the cannabis industry as well as consumers.

As you said, Colorado has been at the forefront of all of this and Governor John Hickenlooper has made a few statements about how he's nervous about implementing new regulations like the pot clubs bill because he doesn't want to put more of a target on Colorado's back. Do you share his concern?

Well, no. Colorado has led the way and will continue to lead the way and to the extent we can encourage safe-use habits and safe driving and provide a better way to get it out of our public spaces, I think the clubs could provide a viable alternative if they're allowed in municipalities and counties.... There's nothing in federal law that prohibits that.

Denver passed I-300 and it looks like it'll go into effect this summer, so it will be an interesting testing ground.

That's a good idea, I supported that. Each community can make their own determination, but I was supportive of the efforts in Denver to provide for a social-use zone. It's safer for participants and it provides a way people can legally exercise their rights under Amendment 64.

We're also seeing a debate right now regarding the International Church of Cannabis. There was a meeting this week where neighbors talked about their unease with having it in their neighborhood.

We need to end the federal prohibition on marijuana and let states, and even counties and cities, decide what they want to do. To this day there are dry counties that don't allow the sale of alcohol in states like Texas and Tennessee and that's entirely appropriate, whereas the federal government long ago ended Prohibition and it's entirely up to states and counties to determine what they want to do. It should be the same with marijuana.

One of the things your colleagues in Congress cite as a reason for not legalizing marijuana is a lack of data. What do you say to them? Have you found a good argument to counter that lack of research?

At the Big Thinkers talk we had Andrew Freedman, who headed up the marijuana regulation team and has now left to be a consultant, to talk about the impact, and the data is sufficient to show that there's no increase in underage use and there's no reason to believe the public health is any worse off after legalization. And, of course, there's every reason to believe that many benefits have been accrued in terms of tax revenue and putting criminals out of business. This is exactly the type of information we wanted to present to a broader audience today through the Big Thinkers talk in the Capitol.

What were the main takeaways you were excited for your colleagues to hear from the presenters?

Really, just to get good information about what happened in Colorado and what's worked, how other states can learn, and how the federal government just needs to step aside and allow states and local jurisdictions lead the way in respect to a science-based approach to marijuana legalization.