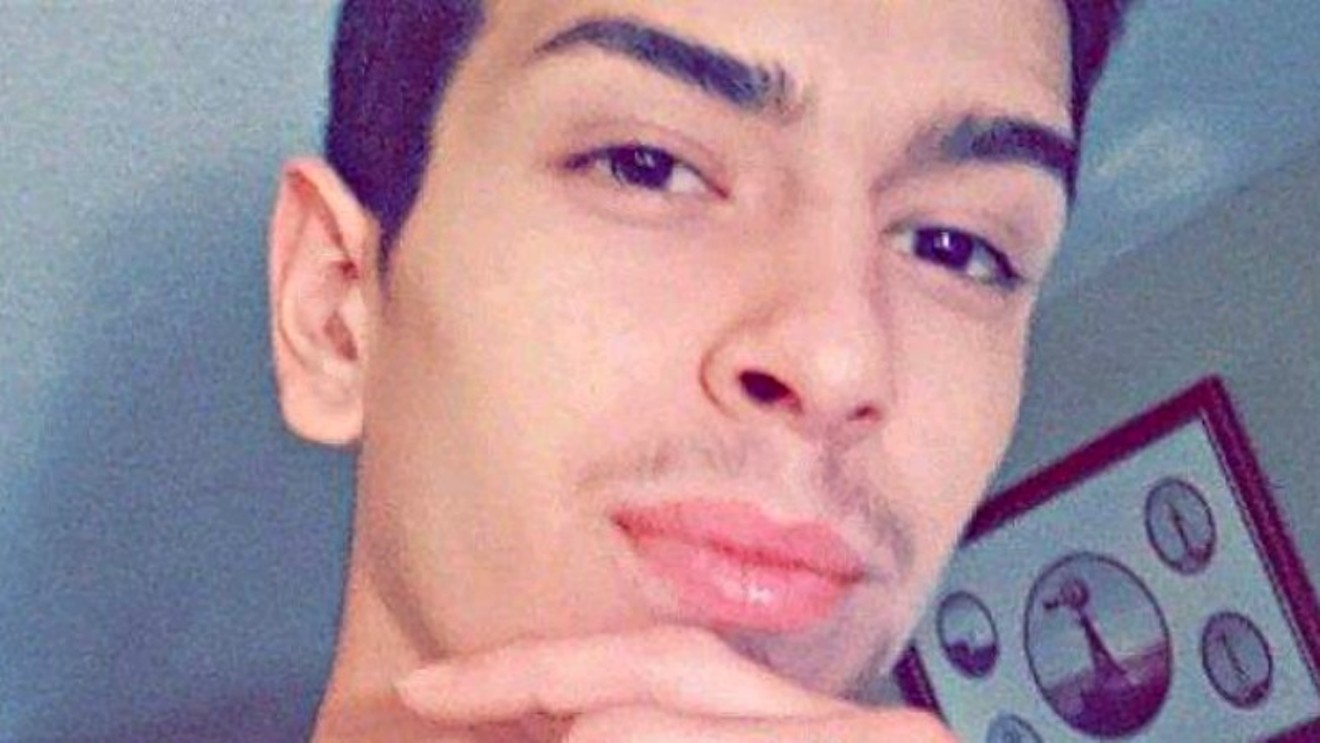 Andrea Feltman posted this photo of her son, Kyler Grabbingbear, on her Facebook page in October along with the caption "I love my baby boy." Facebook
"The sadness turns to anger," says Andrea Feltman when talking about her son, nineteen-year-old Kyler Grabbingbear, who was unarmed when he was shot to death in Thornton by an Adams County deputy early on December 7. In conversation, Feltman breaks down into tears on several occasions, overcome by a sense of loss even as she's in the midst of planning her boy's funeral services, scheduled to take place on Saturday, December 16, followed by a vigil at the scene where he died; get details below. But her voice is firm when referring to the actions of the deputy, whose identity has not been publicly released at this writing. "Kyler wasn't shot," she stresses. "He was slain. He was murdered."

Feltman has been frustrated by the comments that have appeared on articles about Grabbingbear's death. "I can't even look at Facebook right now," she acknowledges. "I clicked on something put up by somebody popping off at the mouth, and I just put my phone down. It was like, I can't. That's my baby."

She adds: "Kyler wasn't a drug dealer, criminalistic kid like they're talking about when they're assuming all this stuff and making themselves look like asses. I did post one thing, and I tried to say it as respectfully as I could. I was like, 'Hey, I'd appreciate it if you guys wouldn't run off at the mouth about my child until you know the facts.' And people were still like, 'Good job, sheriff. Good job, officer.' But good job for what? Good job for killing an innocent man? What if it was me who'd killed an innocent man like that? I'd be going down for it. But this deputy won't, because he has a badge."

As for what Grabbingbear was really like, Feltman notes that "he was an only child. He was raised by me as a single mom. I had some help from the family, but for the majority of the time, it was him and me — and he was a great kid. He played basketball, baseball, football. He had a few select, close friends, but he was a homebody. He was an animal lover, an animal-rights activist. He was a loving, caring free spirit who was trying to finish high school. He was behind, but he wanted to finish, wanted to be a cardiac surgeon. He tried to help people, and he wanted to save lives. He was a grandson and a great-grandson and a nephew, and he was compassionate. He'd give you the shirt off his back. And he didn't get into trouble. He didn't party, he didn't do drugs, he didn't drink. He just kind of kept to himself."

In addition, Feltman goes on, "he was very spiritual, and he was so respectful. Anybody who came into contact with him would say he was awesome. On Monday, I had to go to the county to fill out some paperwork to get some assistance with the burial, and I ran into this woman we'd seen the week before. She'd helped Kyler get a food-stamp card; he was looking for a job, but he wasn't working. And she said when she saw his name on the news, she lost it. She said, 'I can't believe it. I just saw him in front of me, and he was such a great kid.'"

He could also "piss you off to the fullest," Feltman admits with a bittersweet laugh. "The other night, he lectured me for forty minutes — about not cleaning the car! I hadn't cleaned it because I've got a broken foot. But he was like, 'Come on, Mom!' Just lecturing me about life things. He was like, 'You pay your car insurance and make your car payment, but I'm the one who takes care of your car. I change the oil, I do this, I do that. But you can't even keep your car clean.' I can hear him in my ear saying all those things. And he'd hide receipts if I bought something for myself. Like, I bought a winter coat, because I didn't have one. I always made sure Kyler had everything he needed, but I wouldn't buy anything for myself — and a lot of times, I'd feel guilty about spending money on myself and take things back. So Kyler would hide the receipts, so I couldn't. That's the kind of kid he was. He was my best friend, my world, my everything." 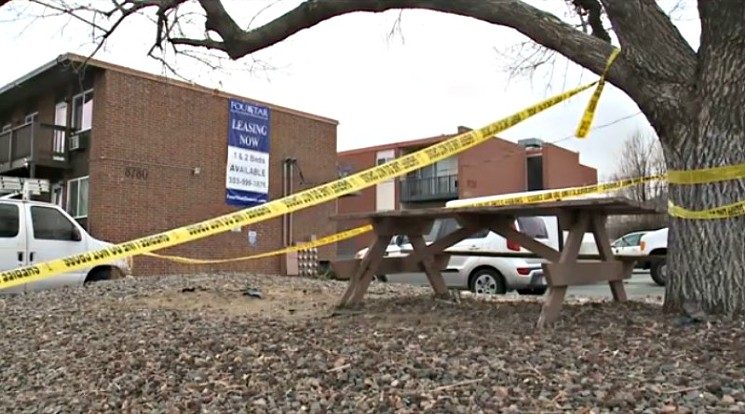 The scene of the shooting the morning after.
Courtesy of Fox31
Adams County describes the incident that led to Grabbingbear's death like so. At approximately 3:34 a.m. on the 7th, a deputy was called to an apartment complex on the 8700 block of Galen Court in regard to a domestic-violence complaint. While investigating that case, the deputy heard what was characterized as a disturbance in a neighboring apartment, and when that individual — Grabbingbear — fled, he gave chase. A scuffle followed, and during the scrap, the deputy squeezed off a shot. Grabbingbear died. The deputy was subsequently taken to a nearby hospital for treatment of unspecified injuries.

And Feltman? Her version of events could hardly be more different.

"I saw Kyler twenty minutes before he was killed," she reveals. "He left my house at 3:15. All he was going to do was go home — he and his girlfriend lived in an apartment about five minutes away — to get something to eat and go to bed. He was tired and hungry. But he and his girlfriend were in the middle of a breakup, and when he got to the apartment, he started yelling to himself, getting kind of angry. His girlfriend wasn't there, but her mom was, and she said, 'Hey, you need to calm down or you need to leave. I'm going to call the cops if you don't calm down.' So he left, but the cops were already there, and when Kyler walked out and saw the deputy, he took off."

Why? Feltman says Grabbingbear was "scared of police because of all the things that have been happening in the world," and he also had "a $100 misdemeanor warrant for missing a court date." (Although his offense has been reported to have involved misdemeanor drug possession, Feltman insists that he "didn't have a rap sheet" and only had traffic-related matters on his record.) "He'd already called Adams County and asked if he could go to court, and they said, 'Too much time has passed. You have two choices. You can do this or that.' So he was trying to come up with the $100 so he could turn himself in and then bond right out, because he couldn't have handled being in jail. That's the only reason he ran."

Afterward, Feltman maintains that officers "kicked in the door of their apartment and held his girlfriend's mom at gunpoint, took her to the police station, interrogated her for over three hours and told her that a cop had been shot — but then told her that my son was the one who'd been shot." 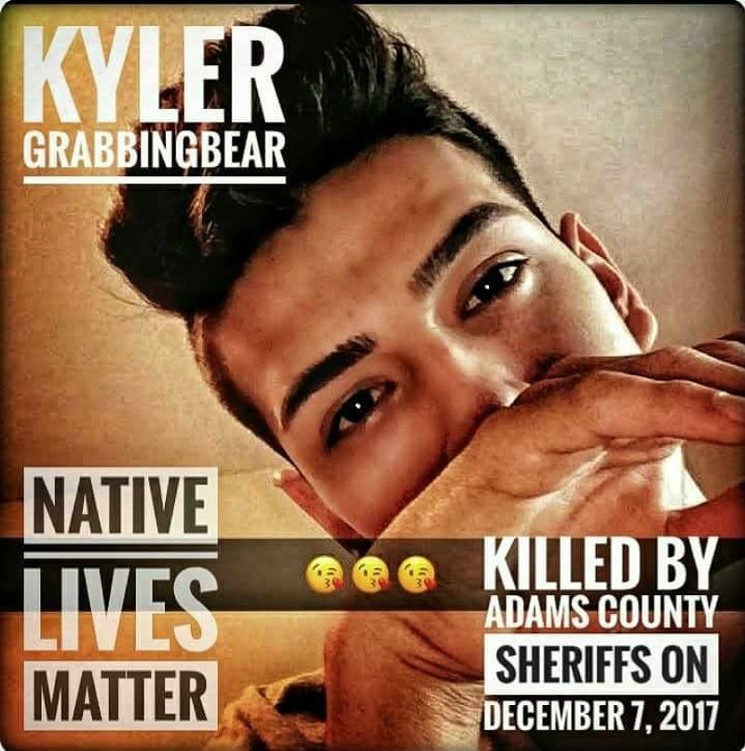 A photo/graphic shared by Andrea Feltman after Kyler's death.
Facebook
At that point, Feltman had no idea anything was wrong — and she wouldn't for a while. "I was only five minutes from the scene. That's how close we lived to each other. I'd make a right turn and then a left turn and then a right turn and I'd be at his place. But no one called me. I woke up at 9:15 and my son wasn't there, so I blew up his phone. It was ringing and ringing and ringing and going to voicemail. So I called his girlfriend, and she was sobbing. I could tell something's wrong. I said, 'Hey, are you crying?' She said, 'Yeah.' I said, 'Well, have you talked to Kyky?' She said, 'Didn't you hear?' I said, 'Hear what?' And she said, 'He's dead.' I said, 'He's dead?' She said, 'The cops shot and killed him.' I said, 'What the fuck are you talking about?' I just woke up two minutes before that. I freaked out and tried to call her back, but she couldn't answer the phone, so I texted her and said, 'Tell those fuckers to call me.' And it was an hour and a half or two hours before a detective called. He said, 'I want to express my condolences, and can you come down here and give your consent to search your car?'"

No weapon was found in the vehicle, which Feltman feels certain frustrated investigators. "Imagine if he didn't have that warrant. How much worse would that have looked? But Kyler just took off because he was scared. He wasn't a criminal. He hadn't done anything wrong. Nothing at all."

Today, Feltman is scheduled to complete witness statements, after which she has an appointment to meet with an attorney. "Anybody I come into contact with, I tell them, 'My son was murdered by an Adams County deputy,'" she says. "I just need justice for my son."

In the meantime, there's the funeral, at a church whose name she couldn't remember off the top of her head during her interview with Westword. Turns out it's St. Paul's Community Church, 8001 West 23rd Avenue in Lakewood. The service, for which a GoFundMe page has been created to raise money for expenses, will be in the morning — the time has not yet been announced — and then, at 6 p.m., Grabbingbear's family and friends will gather near the Galen Court apartment complex for a vigil.

"I know Kyler's with me and keeping me strong," Feltman says. "I have my breakdowns, but I want people to know my son wasn't a bad kid. He was a great kid, and it's unreal that he's gone and I'm not ever going to be able to talk to him or hear his voice again."