A Facebook photo of Scott Pack. Additional images and more below. Facebook
Update: After the publication of this post, Scott Pack provided us with additional information that's intended to show he did nothing to defraud the plaintiffs in a lawsuit against him and acted in a manner that was completely legal and ethical. See it below, following our previous coverage.

Original post: Attorney Matthew Buck has filed a lawsuit in what he calls "the largest fraud case in the history of Colorado's marijuana industry." This contention is rejected by Scott Pack, the entrepreneur at the center of it.

No criminal charges have been pressed against Pack at this writing. But in the complaint, on view below, Buck's clients, Pierre and Christophe Raygot, claim to have been bilked out of $500,000 by Pack and Rudy Saenz, the latter of whom was among sixteen people indicted last month in what prosecutors describe as a massive operation that grew marijuana for distribution outside Colorado. And Buck maintains that seventeen additional investors were also taken by Pack and Saenz; he estimates the total losses at more than $5.3 million.

"We've never seen anything close to this" in the Colorado cannabis business, Buck says. "I've never seen investments this great fail, let alone fraud on this scale. And our law firm" — Corry & Associates — "has been doing this for seventeen years," since the approval, in the year 2000, of Amendment 20, which legalized medical marijuana in the state.

In response, Pack provided the following statement to Westword: "We have structured our business abiding by the governing laws and regulations and there is no reason why we would need to deceive our stakeholders, who still hold value in our company. We deny the allegations in this case, which will easily be proven false once facts and evidence are revealed in court."

Also named in the lawsuit is Michael Pack, father of Scott and a wealthy real-estate developer based in San Diego. According to the complaint, Michael owned a warehouse property at 12555 East 37th Avenue associated with two other entities that Buck's clients are targeting, HGCO LLC and Harmony & Green LLC, as well as a home at 676 Monroe Street where Saenz was living. The latter address was raided during the investigation of the aforementioned marijuana trafficking ring allegedly led by Michael Stonehouse, another March indictee. Authorities reportedly found and seized more than 2,500 pounds of marijuana, worth an estimated $5 million, from Stonehouse's residence, located in Elizabeth.

Rudy Saenz.
LinkedIn
Scott Pack met Pierre Raygot in 2010 at Nevada's Burning Man festival, the lawsuit states, and five years later, he approached Raygot about investing $100,000 to buy a 1 percent stake in Harmony & Green LLC, which was said to manage marijuana businesses in Colorado and California.

In June 2015, the suit continues, Raygot flew to Colorado to meet with Scott and Saenz at the Monroe Street home, where he was shown documents that said Scott had invested $2.5 million in Harmony & Green LLC and that Saenz's wife, Suzanne, has ponied up $4 million — assertions that Buck portrays as false. In his words, "That money's not real."

After being told that investing money in Harmony & Green LLC would result in a healthy profit within one year, at which point he could choose to convert his note into company equity, Raygot transferred $100,000 to the firm, the lawsuit says — and the next year, he supplied $400,000 more to buy another 1 percent stake for himself and an equal share for Christophe, his brother.

Problem is, Buck explains, HGCO LLC, the other firm named in the lawsuit, is the only one with real value: "It owns nineteen marijuana licenses, which are worth a lot of money. But Harmony & Green LLC, the management company, owns nothing. It's effectively a shell company they used to launder money."

Those weren't the only things wrong with the transactions, Buck believes. Neither Pierre nor Christophe are U.S. citizens, so they aren't allowed to make investments in a marijuana company under Colorado law. On top of that, Buck says, "all of these investments should have been disclosed to the MED [Colorado's Marijuana Enforcement Division]. They were not — and the investors should have been fingerprinted and badged, and they weren't, either, because in almost no instances were the investors Colorado residents, and at least three of them weren't citizens."

A graphic touting Harmony & Green LLC that's included in the lawsuit.
Courtesy of Matthew Buck
In response, Scott points out that Harmony & Green LLC, the company in which Pierre and Christophe purchased equity, doesn't grow, extract or sell marijuana. Instead, it's used as a brand for, and facility sub-leasor to, HGCO LLC. This distinction is reinforced by the Harmony & Green LLC website, which neither mentions marijuana nor includes typical cannabis imagery. On the site, Harmony & Green LLC is described as "a streamlined business support company set up to assist companies who specialize in agricultural cultivation, manufacturing, extraction, beautification, refinement & the wholesale & retail distribution of elite & unique specialty products."

Update: As noted above, Scott Pack reached out to us after the publication of this post to share graphics provided to potential investors in Harmony & Green LLC, including Pierre Raygot. As he points out, the slides make it clear which entity holds the investment and which one holds the licenses (HGCO LLC).

The images are followed by the text of a letter Pack sent to the Marijuana Enforcement Division stating his position in regard to the criminal case against Saenz, as well as the complete complaint. 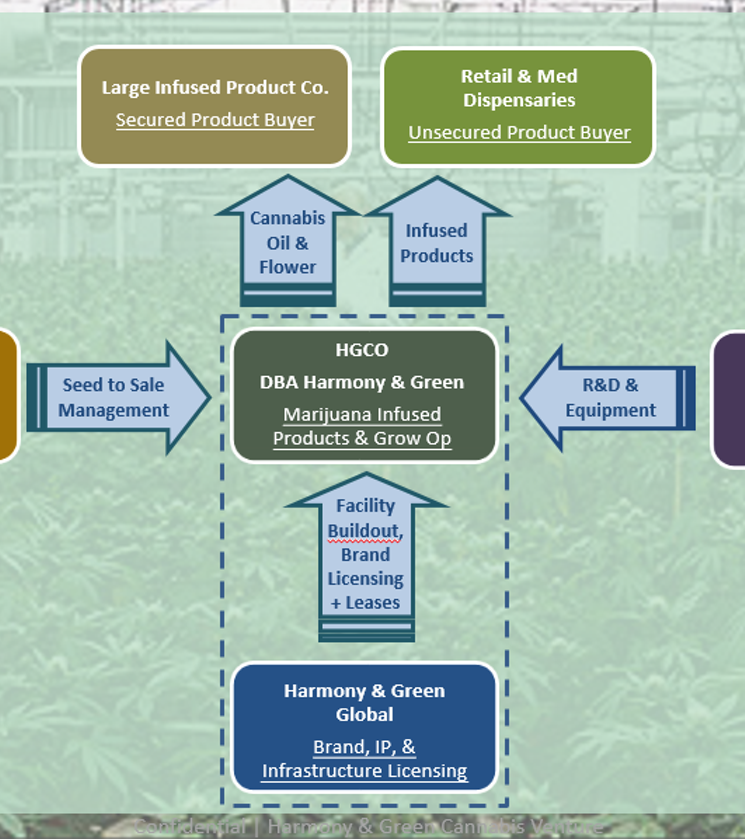 My name is Scott Pack and I am the sole owner of HGCO, LLC, a licensed Marijuana company with various licenses and facilities in Denver and Colorado Springs. HGCO had been building its business for two years and was yet to make its first sale of product when 4 of our facilities were raided by law enforcement (though only 1 was operating) and all product and materials seized.

HGCO would like to formally report that 1470 plants and 350 clones and 180 pounds of marijuana, consisting of the entire vegetation held under license #403R-00060, located at 12555 East 37th Ave, Denver, CO (“37th Ave facility”), were removed from the premises pursuant to a warrant.

As evidence will indicate from HGCO’s surveillance system (currently held as evidence by the DA), absolutely no plants had been transitioned to a ‘flowering’ stage at the 37th Ave facility at the time that various illegal acts are alleged to have occurred, therefore no mature marijuana plants were ready for harvest. Most importantly, none of the acts alleged were authorized acts that occurred inside the licensed operations of any HGCO facility (only in parking lot or prior to HGCO’s control of facility). HGCO simply cannot control the acts of badged, rogue contractors acting outside of the scope of their employment.

With very little investigation, it will become evident that the materials seized were not the fruits or instruments of any illegal activity. HGCO will assist the MED as it moves to validate these facts during its Due Process, while HGCO cleans up the damage and readies the facility back to its safe, compliant operational state. HGCO is under obligation to fulfill its contractual/legal obligations to its stakeholders (Staff, Landlords, Note-Holders, etc) who have neither engaged in nor encouraged any illegal activities relating to this seizure.

Each agency involved in this investigation can expect full transparency and cooperation from HGCO during the investigative process and we will continue to adhere to the rigorous regulatory standards that governs our trade.
As evidenced from our surveillance system, defined processes, and as our access controls will irrefutably demonstrate, the team has gone through great effort and extensive cost to ensure that the methodologies, management, and reporting of our facilities have been in full compliance with MED policy and law. HGCO would not go through such length to build a sizeable operation, only to jeopardize the entire company by operating outside the bounds of law or regulation.

Though this comes as a complete shock to HGCO, it is my understanding of the initial Indictment that HGCO has NOT been implicated/identified and the focus is on certain individuals pertaining to external activities that have been underway far longer than HGCO’s existence. Although we believe the tagged and monitored material removed by the DEA from the 37th Ave facility was done so in error, HGCO is ready to input the destroyed plants into METRC and proceed with its cleanup and recovery of the business, which includes transferring of the licenses. Needless to say, the MED and all agencies can be assured that any party mentioned in the initial indictment will not be involved with continued operations and that we will continue to comply with all applicable code statutes or regulations relating to the cultivation of Marijuana in Colorado.

Thank you for your time and consideration.