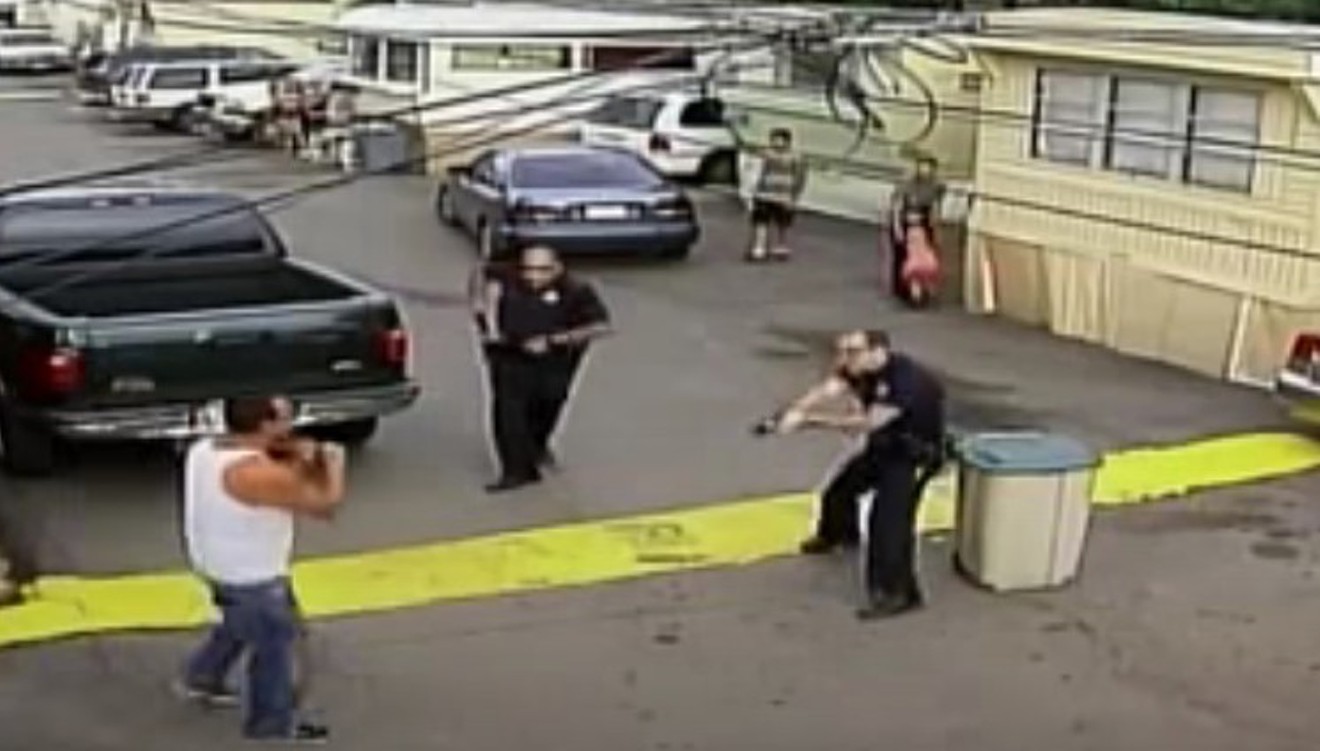 Paul Castaway with a knife to his throat as he moves toward officers, as seen in surveillance footage from the tragic scene on view below. Denver District Attorney's Office via YouTube
Last year, the mother of Paul Castaway, a suicidal man who was holding a knife to his own throat when he was killed by Denver police officer Michael Traudt in July 2015, filed a wrongful-death lawsuit in the case, with attorney Matthew Buck arguing that Castaway was "effectively murdered" during an incident captured on video, as seen below. Now, a U.S. District Court judge has denied a motion to dismiss the excessive-force aspect of the allegations against Traudt, keeping the case alive and on track for what could be a blockbuster trial.

"If you look at the video, there's no way a jury doesn't find that this police officer killed Paul Castaway and violated his civil rights," Buck maintains. "That's why I think they fought so hard to get the case away from a jury. Because axiomatically, it's murder."

Along with Traudt, the other defendants in the suit, which can be accessed here along with the latest order, were the City and County of Denver, Chief of Police Robert White and Jerry Lara, another officer who responded to the fateful call about Castaway. Wiley Y. Daniel, senior judge for the 10th Circuit, tossed the claims against Denver, White and Lara, as well as ones that targeted Traudt in his official capacity. However, Traudt is still on the hook as an individual in regard to actions for which he wasn't punished by either the Denver Police Department or the Denver District Attorney's Office under previous DA Mitch Morrissey.

"The DPD did an internal investigation, and they determined, as they always do, that this murder was justified," Buck told us for our previous post. "Then Mitch Morrissey determined, as he always does, that this murder was warranted. He will end his term having been feckless and allowing the DPD in this case to ruthlessly murder a citizen as opposed to protecting and serving, as they are supposed to do."

Seconding these thoughts was Lynn Eagle Feather, Castaway's mom, who reached out to police in the first place. "I called for help, not a killing," she said last year.

Despite the stark differences between Morrissey's conclusions and those of Buck, there's basic agreement about the general facts of the case.

On July 12, 2015, Eagle Feather was babysitting her grandchildren at her home in a trailer park at 4545 Morrison Road.

That's when Castaway, whom she believed to be drunk, busted into the residence — she'd previously kicked him out — and poked her in the neck with a knife. Here's a look at the puncture wound, in a photo provided by the DA's office.... 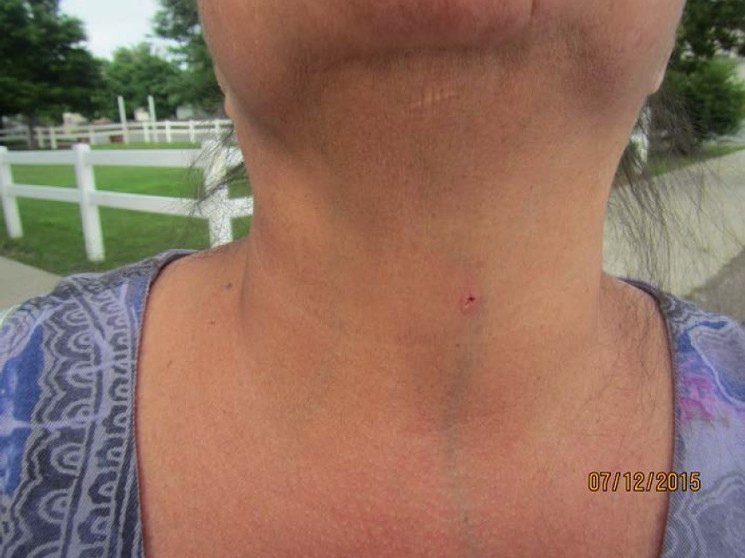 "He's mentally ill and drunk," Eagle Feather told the operator. She added, "Please hurry!" and "I'm so scared!" — and also suggested that her son had been doing meth and was suicidal.

At 6:22 p.m., Traudt, who had been on the force for just over a year, arrived at the scene alongside Lara, and amid their investigation, they spotted Castaway.

An excerpt from Traudt's account of what happened next, from the decision letter released by the DA's office, reads:


He started walking. There's a chain-link fence between where our vehicle was and where he was. So I pulled my patrol vehicle up, my fully marked patrol vehicle, and then got out of the car in full uniform. I announced myself as a Denver police officer. I said, "Denver police. Stop!" And he looked at me, he made eye contact with me and my partner, and then he kept walking up the chain-link fence. As I started to close distance between me and him, he took off running southbound along the chain-link fence. I then gave chase, I aired it to dispatch that we were running southbound through the trailer park in the 4500 block of Morrison Road.

Before long, Castaway put the knife to his own throat and told Traudt, "Kill me, you fucking pussy," the officer recalled. Traudt said he responded by repeatedly saying, "Drop the knife!"

Instead, Castaway ran, and Traudt gave chase as neighborhood kids scattered — actions caught on the video released by the DA's office.

What followed was a face-off between Paul, who was still holding the knife to his throat, and Traudt, pointing his service weapon at him. Officer Lara said he was in the midst of transitioning to a Taser when Castaway began advancing toward Traudt — at which point Traudt pulled the trigger three times, striking Castaway twice. Castaway died from gunshot wounds to the torso.

Here's the aforementioned video. Warning: Its contents may disturb some readers.


One key matter related to Traudt's decision to fire is what's known in law enforcement circles as the "21-foot rule," which states that deadly force is justified against a knife-wielding individual who's within that distance from an officer or someone else — the theory being that the suspect could cover seven yards of ground before an officer could draw a weapon and defend himself.

None other than Denver Police Chief White is among those who argue against automatically shooting someone with a knife who's 21 feet or less away. In a February 2016 interview, White told WBUR radio, "What many officers have been taught across the country is to react right away, and what we’re saying is that we want you to reassess the situation, slow down, move yourself from harm’s way, and then make a decision.”

Although Traudt didn't do that, Buck admitted to us for our 2016 post that Castaway was closer to him than 21 feet; his estimate was twelve feet. But there were other key factors, Buck stressed. For one, "it wasn't a combat knife. It was a kitchen knife that was no threat to Officer Traudt. It might not have even been a threat to Paul."

In addition, Buck went on, "This wasn't a situation where either of these officers was in danger. Paul was pointing the knife at himself, not them. But when Paul took a step toward them, Traudt unloaded on him."

Eagle Feather, for her part, described Castaway as "a very loving father who left behind a four-year-old son." She added, "I do want to see police held accountable.... The police had known about my son. They'd arrested him many times at my place. So they knew him — except for the man who shot him that day. And he shot him in the liver, in front of eighteen children." 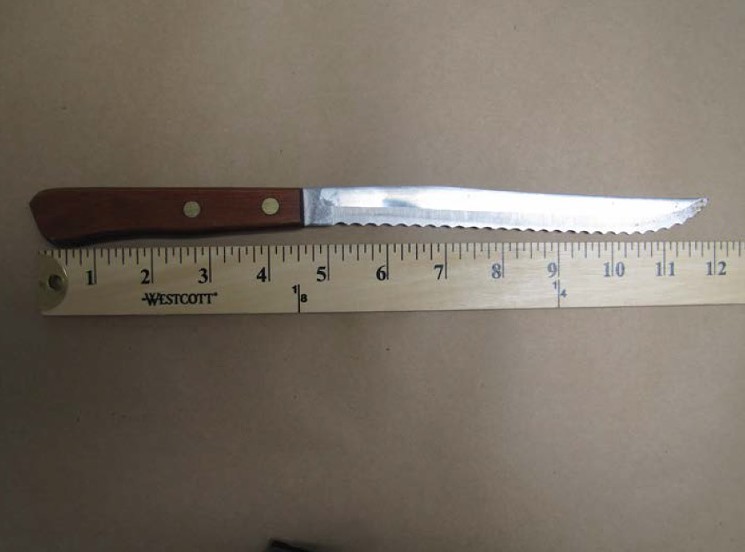 The knife Paul Castaway was holding when he was killed.
Denver District Attorney's Office
Nonetheless, Judge Wiley dismissed Denver, Lara and White from the case — but not Traudt. "While I recognize that Mr. Castaway was advancing towards the officers," he wrote, "the facts construed in the light most favorable to Plaintiff at this stage of the litigation show that Mr. Castaway may not have been making threatening gestures to the officers, was suicidal, and may not have yet been within striking distance of the officers when he was shot and killed. Thus, I find that the evidence is sufficient for a jury to find that an objectively reasonable officer in Officer Traudt’s position would not have believed that Mr. Castaway posed an immediate threat."

Attorney Buck agrees. "This is a story we see over and over and over again across the country: Officers tell us they fear for their life, so they kill someone who never poses a threat to them. And Officer Traudt was never in danger. He was standing next to another person with a gun [Lara], so this wasn't a one-on-one confrontation in an alley, where he didn't know what was going on. This was two well-armed Denver police officers in broad daylight in a very open area with someone who was twelve feet away from him, holding a knife to his own throat."

Buck says Castaway's loved ones "are elated" that the case is moving forward. "Paul had a young son who's going to grow up without a father, and he had a mother who loved him and who doesn't get to see her son anymore. And now it looks like justice is finally going to be served."

Click to read the latest Paul Castaway court order and the original lawsuit.