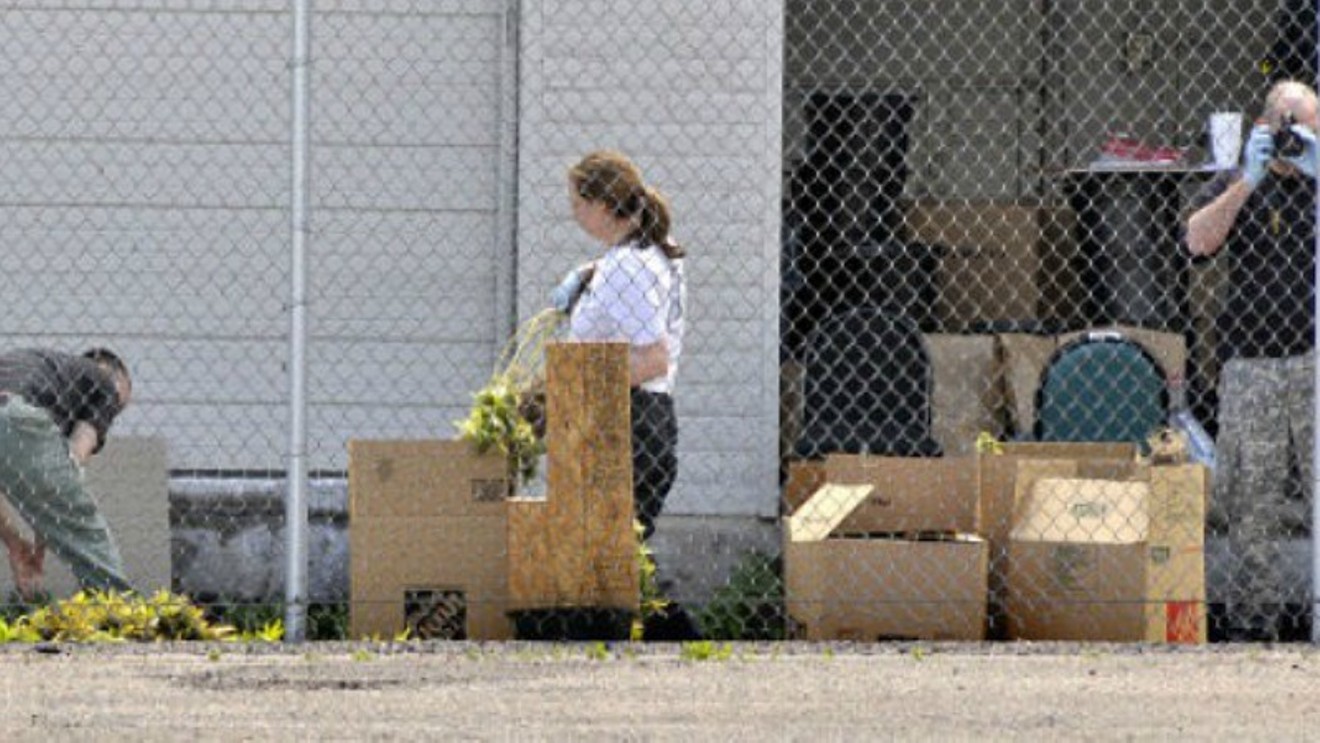 A DEA marijuana raid in Denver earlier this decade. File photo
Members of the Justice Department’s Task Force on Crime Reduction and Public Safety have been ordered to "undertake a review of existing policies" regarding federal marijuana law enforcement, among other things. Their report is due on or before July 27, and the National Organization for the Reform of Marijuana Laws believes the document may use as its template a list by a fellow at the ultra-conservative Heritage Foundation of eleven ways the administration of President Donald Trump can shut down legal cannabis.

The tactics, shared below, include employing the Racketeer Influenced and Corrupt Organizations Act (RICO), as was just allowed via a ruling in a potentially groundbreaking marijuana-smell lawsuit in Colorado earlier this month.

"I've been screaming about this to anyone who will listen, just because of the outsized influence the Heritage Foundation has had over the administration's policies," says Justin Strekal, NORML's policy director. And indeed, the organization has lately been living up to its online boast of being "The Most Influential Conservative Group in America." For example, the foundation is thought to have been largely responsible for Trump choosing Colorado's Neil Gorsuch to serve on the U.S. Supreme Court.

The aforementioned list, originally published in February under the title "How Trump's DOJ Can Start Enforcing Federal Marijuana Law," was assembled by Charles "Cully" Stimson, Heritage's chief of staff and senior legal fellow. "So far, we've seen a number of these points being followed to the 'T' by the administration," Strekal says.

Among the first examples Strekal offers is number nine on Stimson's roster: "Prosecute those dealing in marijuana — which is illegal under federal law — using the Racketeer Influenced and Corrupt Organizations Act (RICO)." This approach is at the heart of complaint filed on behalf of two Colorado landowners, Phillis Windy Hope Reilly and Michael P. Reilly, by Safe Streets Alliance, an anti-marijuana outfit.

As we originally reported in February 2015, when the Reillys first took their gripes about the grow, owned by Alternative Holistic Healing LLC (also known as Rocky Mountain Organic), to court, the original suit doesn't get around to talking about the pair's situation until page 25 of the document.

The married couple own three lots in a Rye, Colorado, development called the Meadows at Legacy Ranch — "approximately 105 acres of beautiful rolling pasture with sweeping mountain vistas that include views of Pike's Peak," the suit notes. And while they don't actually live on the land, they like to visit there on the weekends so that their kids can ride horses and hike.

A marijuana grow is adjacent to the Reillys' property, at 6480 Pickney Road — and that's a problem, the suit maintains, because "growing recreational marijuana is a 'noxious, annoying or offensive activity' by virtually any definition because marijuana plants are highly odorous, and their offense smell travels long distances." Hence, the suit maintains, the grow violates assorted covenants governing Meadows at Legacy Ranch, thereby impinging on the Reillys' ability to enjoy their land as they'd like.

Pro-marijuana industry protesters made their presence felt at a 2015 hearing for the Safe Streets Alliance lawsuit.
CBS4 file photo
On top of that, the sight of a building under construction on the grow site "exacerbates the injury, for when the Reillys and their children visit the property, they are reminded of the racketeering enterprise next door every time they look to the west."

The suit also maintains that the grow has hurt property values — plus, "the large quantity of drugs at marijuana grows makes them targets for theft, and a prospective buyer of the Reillys’ land would reasonably worry that the 6480 Pickney Road marijuana grow will increase crime in the area."

The lawsuit asks for these issues to be addressed via the RICO statute, and the U.S. Court of Appeals for the Tenth Circuit made that possible in a June 7 ruling, stating that "the landowners have plausibly alleged at least one...claim against each of those defendants."

NORML's Strekal sees this decision as highly problematic thanks to "the chilling effect that would be had on the industry should there be a successful RICO suit. It could scare away investors and entrepreneurs and those who have the audacity of trying to follow the American dream by providing consumers what they want, which is clearly legal marijuana. And this comes at a precarious time, when marijuana businesses don't even have access to banking or the ability to claim standard deductions."

Speaking of which: Number seven on Stimson's list is "Rescind the Financial Crimes Enforcement Network’s guidance for banks and oppose efforts to expand banking services to the marijuana industry." That presumably includes banking-reform legislation for the cannabis biz recently described to us by sponsoring representative Ed Perlmutter, who is running for governor of Colorado in 2018.

Also worrisome to Strekal is number five: "Rescind and replace the August 2013 memorandum from then-Deputy Attorney General James M. Cole — i.e. the 'Cole Memo.'" That document, issued in 2013, stated that the Department of Justice under President Barack Obama would not spend its limited resources seeking to prosecute marijuana businesses following the laws in states that have legalized cannabis.

"Attorney General [Jeff] Sessions, when pressed, has affirmed that the Cole memo is current department policy," Strekal notes, "and he's said there are valid points made in it. But he's never made a commitment to maintain its current interpretation, as it was under the Obama administration, as being a department priority going forward."

Moreover, Strekal believes any new memo will be penned by Steve Cook, a hard-ass former prosecutor who appears to agree with Sessions (but a shrinking number of others) that the drug war is still worth fighting.

In advance of the report's release, Strekal says, NORML "is doing everything we can to raise awareness both publicly and privately — to build up the public pressure to get this administration to stand down before they begin a crackdown."

Continue to see the Heritage Foundation list of ways the Trump administration can shut down legal marijuana.