Activist Lisa Fithian Never Hesitates to Shut It Down

Lisa Fithian brings the resistance to Colorado. Kisha Bari
Lisa Fithian is a tireless civil disobedience activist who’s had a hand in some of the most notable movements in the past few decades, from the 1999 Battle of Seattle to the response to Hurricane Katrina, to Occupy Wall Street to Standing Rock and Ferguson. Now she comes to Colorado on a national tour for her new book, Shut It Down: Stories From a Fierce, Loving Resistance.

Fithian’s book is perfect for those who want to become more active in resistance — and also for those just feeling overwhelmed or hopeless. Fithian offers strategies and actions you can take right now to promote justice, incite change, and generally make a difference in your community and the world at large.

In advance of her appearance, we chatted with Fithian about her work, her book and what a lifetime of resistance can achieve.

Westword: You're coming to Colorado to do a few events at different locales around the Denver metro area, including Boulder. Can you give us a quick rundown of your different plans for the separate events?

Lisa Fithian: I actually start my day on Sunday, September 15, at an Eco-Dharma Retreat with some of the core organizers of Extinction Rebellion in Colorado. From there I will be speaking about the book at Barnes and Noble in Boulder; later that evening I’m offering a training called Escalating Resistance: Mass Rebellion Training in Denver at the First Unitarian Society of Denver.

On Monday evening [September 16], I’ll be at the Alliance Center in Denver in a conversation with Denis Moynihan, an old friend from the streets who has been a longtime Democracy Now! special-projects coordinator, a best-selling author and syndicated columnist, and a founder of KFFR 88.3 FM community radio in Winter Park. All proceeds from book sales at this event will go to support KFFR 88.3 Community Radio.

Chelsea Green Publishing
You were called "the nation's best-known protest consultant" by Mother Jones. What are your most well-known civil actions?

I think many of the stories in the book speak to actions I worked on that now are a part of our movement history. From shutting down the CIA to stop a war, from blocking D.C. bridges to win improvements in the lives of thousands of janitors, to shutting down the WTO in 1999 in Seattle — these were all huge moments in movement history, and all of them had great impact.

The Common Ground Collective that formed in New Orleans after Hurricane Katrina set a new pattern for how we as people of consciousness can show up after a disaster to engage in acts of solidarity, to support those who have been most impacted and are getting the least support. Just about everything we did was through direct action. We were not asking permission or waiting for someone else to solve the problem.

One of my favorite actions in New Orleans was the opening of the Martin Luther King Elementary School during spring break 2006. Under the leadership of residents in the Lower Ninth Ward, hundreds of volunteers took action to clean the school, a school the government did not want open. That action kicked off an organizing campaign, and in June of 2007, hundreds of children walked back into that building, and [they] continue to go to school there today. There are so many amazing moments, and I feel so honored to have been a part of them.

Tell us how you created your start in the activist community. What was your first protest?

When I was about eleven years old, I participated in a neighborhood protest to get a stoplight on the main road into the area. We didn’t win, but I remember the excitement I felt. In high school, I learned two important lessons: that there was injustice, and that people could make a difference by organizing. These lessons set me on a path that I am still on.

And what protest was closest to your heart on a personal level? Why that issue?

This is a hard question, as so many of them are close to my heart. The opening of the Martin Luther King Elementary School I mentioned earlier was deeply meaningful and rewarding. The thing that really moves me in all of these protests is watching people come alive. You can see it in their eyes and how they hold their bodies. There’s an energy that runs between us when we stand in our power together facing great odds. That is what keeps me doing this work, because at the end of the day, it is people willing to reclaim their power and act with courage that is changing this world.

The subtitle of your book seems so important. Being simultaneously "loving" and "fierce" is key to the success of any effective and long-lasting resistance. Can you talk about that relationship a bit more, and why both are so vital?

Civil disobedience is most powerful when we move beyond symbolic action and directly shut down oppressive systems, institutions or projects that are doing harm. To do this requires taking risks. We’re willing to take risks when we are fighting to protect what we love. When we love something that is in danger, it is easy to be fierce — kind of like a mother’s love for their child. When we combine our fierceness with our love, we are unstoppable. 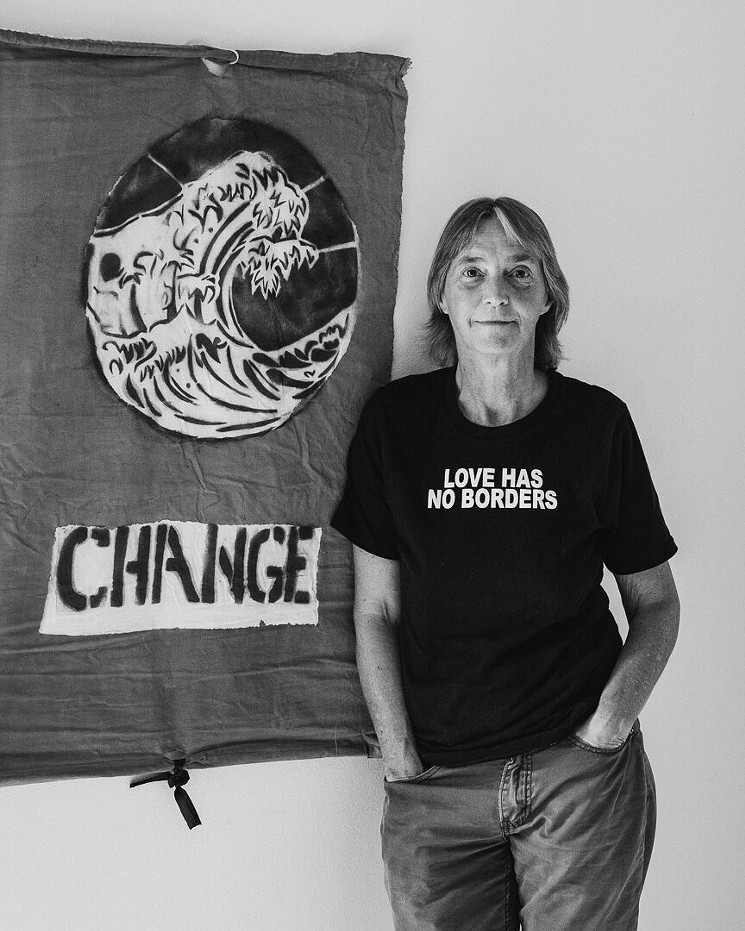 Lisa Fithian
Leon Alesi
You've inspired so many protesters. Some refer to you as a legend. Who are the civil disobedience legends that inspire you?

Honestly, I’m not inspired by legends, but by the courage of ordinary people who stand up by sitting down — in the streets, the workplaces or by blocking bridges and more. I don’t see myself as a legend, but [as] someone who has chosen to be of service and do the work. I’m a street girl who has continued to organize because it not only changes other people’s lives, but it continues to change mine, and I am so grateful for all the lessons we create as we do this work together.

What's the one myth about protests that you'd banish if you could?

That civil disobedience is too passive or not radical enough. My experience has been that we can do incredibly disruptive actions that can shut a city down in key areas to expose injustice and create the conditions for change. Another myth is that civil disobedience is only accessible to privileged white people. I certainly understand that white-skin privilege means the consequences can be much less for those of us who are white and risk going to jail. I have also seen how Indigenous, Black and Brown movements have throughout history embraced civil disobedience and direct action and been the teachers of these tactics as a primary strategy for change.

How do you think Colorado has done — and continues to do — in the area of speaking out and "shutting it down?" Any shout-outs you'd like to make, past or present?

I have not been close enough to the organizing there today, but I did a lot of organizing in Denver during the Justice for Janitors campaigns in the mid-’90s. I was arrested three times in one week shutting down streets with Local 105. In fact, it was those arrests, along with some in D.C., that were the excuse behind the Canadian government trying to deport me back in 2001 when I traveled to Ottawa for a G-20 protest. I was like, you want to deport me for helping janitors get health care? Go for it. I refused to get on the plane, went to jail in Canada for three days and won the right to stay. I was very proud of the Denver janitors who organized and won a good union contract, which was eventually expanded into the suburbs, as well.

What do you think is the biggest issue Colorado has to face in the coming era? On what should our attention be focused?

Colorado is facing issues similar to many cities in this country. ICE raids and immigrant detention. Efforts to expand oil and gas extraction. Sexual harassment and the fight for reproductive justice. Discrimination and living wages and respect for workers' rights. These are fights that we see across this country, and Colorado is no different. These are the reasons I urge people more and more to come out of their silos and organize solidarity response networks, where we can show up for one another at critical times on critical fights. I hope that we begin the new decade of 2020 with a radically new orientation to how we build power by deepening our relationships, broadening our networks, acting with solidarity, and undoing the oppressive belief systems we have been socialized into: white, male, wealthy. We must stop the violence and trauma they create while organizing like hell to reclaim our humanity and heal ourselves and the planet.

Lisa Fithian will speak about her new book with Denis Moynihan at the Alliance Center, 1536 Wynkoop Street, at 6 p.m. Monday, September 16. The event is free, but registration is suggested.
KEEP WESTWORD FREE... Since we started Westword, it has been defined as the free, independent voice of Denver, and we'd like to keep it that way. With local media under siege, it's more important than ever for us to rally support behind funding our local journalism. You can help by participating in our "I Support" program, allowing us to keep offering readers access to our incisive coverage of local news, food and culture with no paywalls.
Make a one-time donation today for as little as $1.