Still from local documentary, JonBenet's Tricycle. Denver Film Society
JonBenet’s Tricycle, the debut film from local renaissance man Andrew Novick, will have its world premiere this weekend at the Denver Film Festival. In advance of the screening, Sally Centigrade Art Gallery will host a filmmaker pre-party and launch of a limited-edition poster starting at 6 p.m. tonight, Thursday, November 9.

The film examines the issues of obsession, tragedy and how media coverage can alter our perception of events. “As much as it is about this murder, it’s also about pop culture and media and the fascination we have with unsolved crimes,” says Novick. “People have always been fascinated by cases like these. Even back in the days of Charles Manson, people followed that in the media. But this was nothing like the cases in the ’90s, with the news cycle and constant attention.”

Known as the “man who collects everything,” Novick has assembled over 10,000 oddities, everything from board games and dolls to human hair and retainers; his collection served as the basis of a landmark art exhibition at the Lab at Belmar in 2009. But the oddest piece in his collection could very well be a tricycle that may have once belonged to Ramsey. When he was living in Boulder twenty years ago, the tricycle fell into his hands shortly after her notorious murder.

Andrew Novick in a still from JonBenet's Tricycle.
Andrew Novick
“It’s what we call the grapefruit on TV,” Novick explains in his film. “If you had a grapefruit and showed it on TV and then you said, ‘That grapefruit is going to be at the grocery store on display. You can get your picture with it,' people would go just to see it. 'That’s the grapefruit on TV!' TV has this magic power to make something bigger than it really is.”

During the ’90s, coverage of cases like the Ramsey murder dominated the news, especially here on the Front Range. “It was the birth of the 24-hour news cycle. The news was just constant. And if you ever wanted to find out anything, you could turn on one of the news channels, and they have to just keep repeating things, finding any little tidbit to report on,” explains Novick. “It’s this media frenzy that just keeps getting crazier as time goes on.” In regard to the Ramsey case, “it just seemed to always be just under the surface. It pops up every year or two. Tabloids always seemed to keep it alive. ‘New information!’ and then you read the story, and there’s absolutely nothing new in the story.”

Is he worried that some may find the film offensive or in poor taste? “It will look very macabre to some people,” responds Novick. “But it unwraps a lot things about the case and just uses this tricycle as a vehicle to talk about all of these obsessions and fascinations we have.”

One aspect of the film Novick is most excited about is the poster. Designing it gave him a chance to collaborate with local screen printer Arna Miller.

“Sally Centigrade came up with the idea of us working together,” Novick explains. “It’s this great cross-pollination of art and film. It’s a win-win. It’s cool for me to have a poster, and it’s cool for her to be able to work on an outside project.”

When asked about Miller, Novick answers, “I’ve enjoyed her work, and she really had a unique take on the film. I didn’t direct her at all. It was really just her take.”

Screen print artist Arna Miller.
Arna Miller
The two met at a show, and Miller found Novick charming and funny; soon after, she decided to work on the project.

“My inspiration for most of my work is vintage advertisements or magic posters. I really like turn-of-the-century illustrators — they’re just so technically skilled,” Miller says. “I’ve just done a series of magic posters, and I think Sally saw a connection with the weird-themed movie that Andrew did. I don’t normally do commissions like this, but Andrew was super-awesome to work with, and the movie’s great, and I liked being a part of it.” 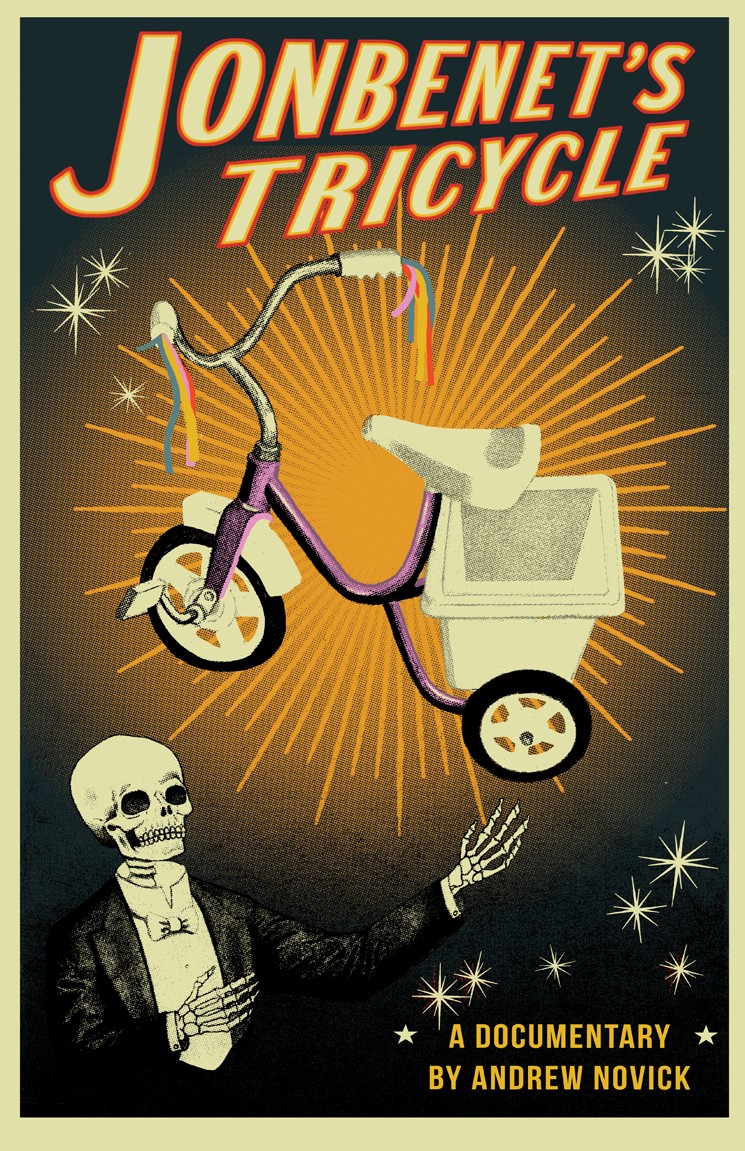 JonBenet's Tricycle film poster.
Arna Miller
The world premiere of JonBenet’s Tricycle is set for Saturday, November 11, at 4 p.m. at the UA Pavilions; the film also plays Sunday, November 12, at 2 p.m. at the Pavilions. Get tickets on the Denver Film Festival website.