Betty Hart (left) and Pesha Rudnick (right). Courtesy of the Aurora Fox Arts Center
Betty Hart isn't just the president of the Colorado Theatre Guild; she's also the star of acts of faith, which opens at the Aurora Fox on Friday, January 20. And as Hart rehearsed for the U.S. premiere of the one-woman play about a religious journey, she reflected on her own faith.

“When you think of the last three years of the pandemic and even before that, part of what our country is grappling with is whether we can have faith in anything,” Hart says. "The play allows me to consider what I believe, why I believe it, and what things I don't believe anymore because of the world that we live in."

Hart is a devout Christian who regularly attends church and is no stranger to questions about faith. “When you're raised as a Christian, one of the coolest and most disconcerting things in your faith walk is when you ask, 'What do you believe, and why do you believe it?'” Hart says. “And in that questioning, you discover what it is you really believe. Getting to play a character who gets to question their faith is something I've never done, which excites me both as a performer and as a person.”

David Yee’s play follows a young woman named Faith (Betty Hart) who gets mistaken for a prophet, and how she responds when a religious leader attempts to take advantage of her story. Faith's convictions are tested in this comedy about the power of belief, youthful disillusionment and the eternal struggle between good and evil.

The playwright, born and raised in Toronto, originally wrote acts of faith during the pandemic as a hybrid play, designed to be livestreamed to audience members while recording the live performance of actress Natasha Mumba. The play made its digital debut in November 2020, produced by Factory Theatre in Toronto. The streamed production was such a hit that the Factory Theatre mounted it again in December 2021, and that was where it was supposed to end.

"This play was not intended for the stage; it was written to be streamed,” says Pesha Rudnick, director of Aurora Fox's production of acts of faith. “But Helen [Murray, Aurora Fox’s previous executive producer] had asked the playwright for special permission to do it as a live stage production. When I spoke to David, he said, 'Good luck; it was intended for the screen.' But he was excited and open to trying it as a solo performance."
click to enlarge 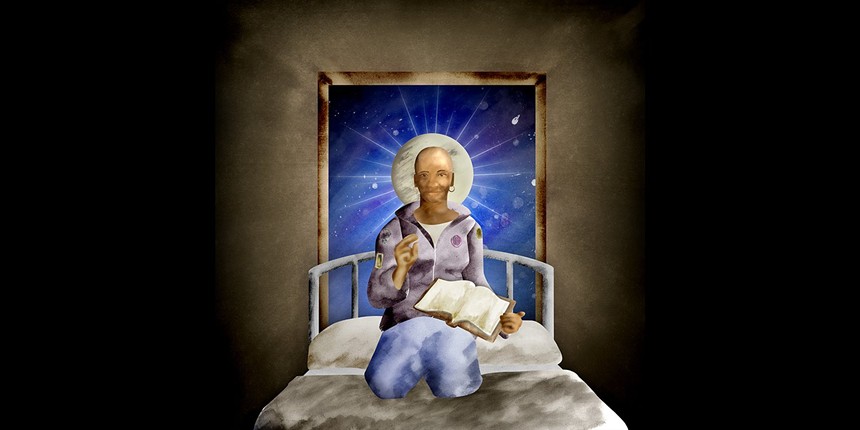 When Hart first received the script from Murray, it took her a moment to realize it was a one-woman show. “At first, as I was reading all these different characters, I thought, “Wow, this is going to be a big cast!” But then I realized, “Oh, my goodness, this is a one-person play!”

The original plan was for Hart to star as Faith and for Murray to direct the production. However, after Murray received an exciting job offer in July 2022 to become the producing artistic director at the American Stage in St. Petersburg, Florida, it became clear that the show needed a new director.

“Helen Murray called about two weeks after she left, and told me that she had secured a special arrangement from the playwright to produce acts of faith but was no longer able to direct the production,” Rudnick recalls. Murray wanted to know if Rudnick would be interested in taking over as director.

Rudnick was intrigued, and she devoured the play's script after receiving it from Murray. “It’s not often that you fly through a script,” Rudnick says. “But I just sat down, opened the script and read it in its entirety. I was immediately attracted to the play’s themes of survival and storytelling as a means to survival; those ideas feel really human and present right now.”

After falling in love with the script, Rudnick agreed to direct the production. Despite having known each other for years and working together as co-artistic directors at Local Theater Company, this marks the first time that she and Hart have worked together as an actor and director.

“We've gotten to know each other over the years, but never got to be in a rehearsal room together,” Hart says. “It’s been a cool, eye-opening and affirming process. There’s a lot of love and respect in the room. She is such a hardworking person. I feel very taken care of, and trust that I've got strong direction so I can focus on acting.”

Rudnick notes that she is using the work of such solo performers as Anna Deavere Smith, Phoebe Waller-Bridge and Spalding Gray as directorial inspiration for acts of faith. “We aren't breaking any convention of how solo performances are done; rather, we are relying on the work of those who came before us as a fountain for this piece," Rudnick says. "I love solo performances, but they are challenging in a way that many performers don’t know. Betty has been so much fun to work with. She has entered this process just saying 'yes,' even though I know there is a lot of fear of doing her first one-woman show.”

Hart’s appearance as Faith is her first acting job since 2019. “Thanks to the pandemic, I've been directing nonstop for three years, so it's a challenge to take on any role. But a role where it's all you all the time? That's a huge challenge,” Hart says. She was thrilled when she first got the part, but as the reality of having to memorize 29 pages and perform a solo performance set in, she started to feel intimidated by the demanding nature of the part.

“I thought it would help me face my fear by telling people I was scared about this role,” Hart says. "But every single person was like, 'Oh, you're going to be great.' Everybody. They're all positive and encouraging, and that didn't help at all, because I was like, 'Oh great, now there's pressure.' And finally, I came to the other side of that experience and decided to face the fear with joy. That's how I like to live my life, so...I just decided to believe I could play this part."

Rudnick has loved working with Hart and the design team at the Aurora Fox to bring this powerful story to life. “I am collaborating with designers who are all new to me, and it has been a fantastic experience to find our language and the language of the play," Rudnick says. “These are some of the best designers I’ve ever worked with, which is incredible. The only challenging part is that I just want more time, but that's just the history of American theater!”

Hart is looking forward to putting this play in front of an audience and feeling their energy. “This is a show with no fourth wall where I'm talking directly to the audience,” Hart says. "It’s an intimate theater space that will only fit seventy-ish people, so I’m going to be able to have a real dialogue with the audience.

“I want people to take away the power of storytelling and remember the importance of listening to everyone's story,” she continues. “I hope people will think about their faith life, what they believe and the why behind it. If you don't think about what kind of acts of faith are happening in your life after seeing a show called acts of faith, I think that might be a little sad. I hope people walk away thinking about the humor as well as the pathos in the play, and that audiences enjoy the wild ride we take them on.”

acts of faith, Friday, January 20, through Sunday, February 5, various times, Aurora Fox, 9900 East Colfax Avenue, Aurora. Get tickets and more information here.
KEEP WESTWORD FREE... Since we started Westword, it has been defined as the free, independent voice of Denver, and we'd like to keep it that way. With local media under siege, it's more important than ever for us to rally support behind funding our local journalism. You can help by participating in our "I Support" program, allowing us to keep offering readers access to our incisive coverage of local news, food and culture with no paywalls.
Make a one-time donation today for as little as $1.