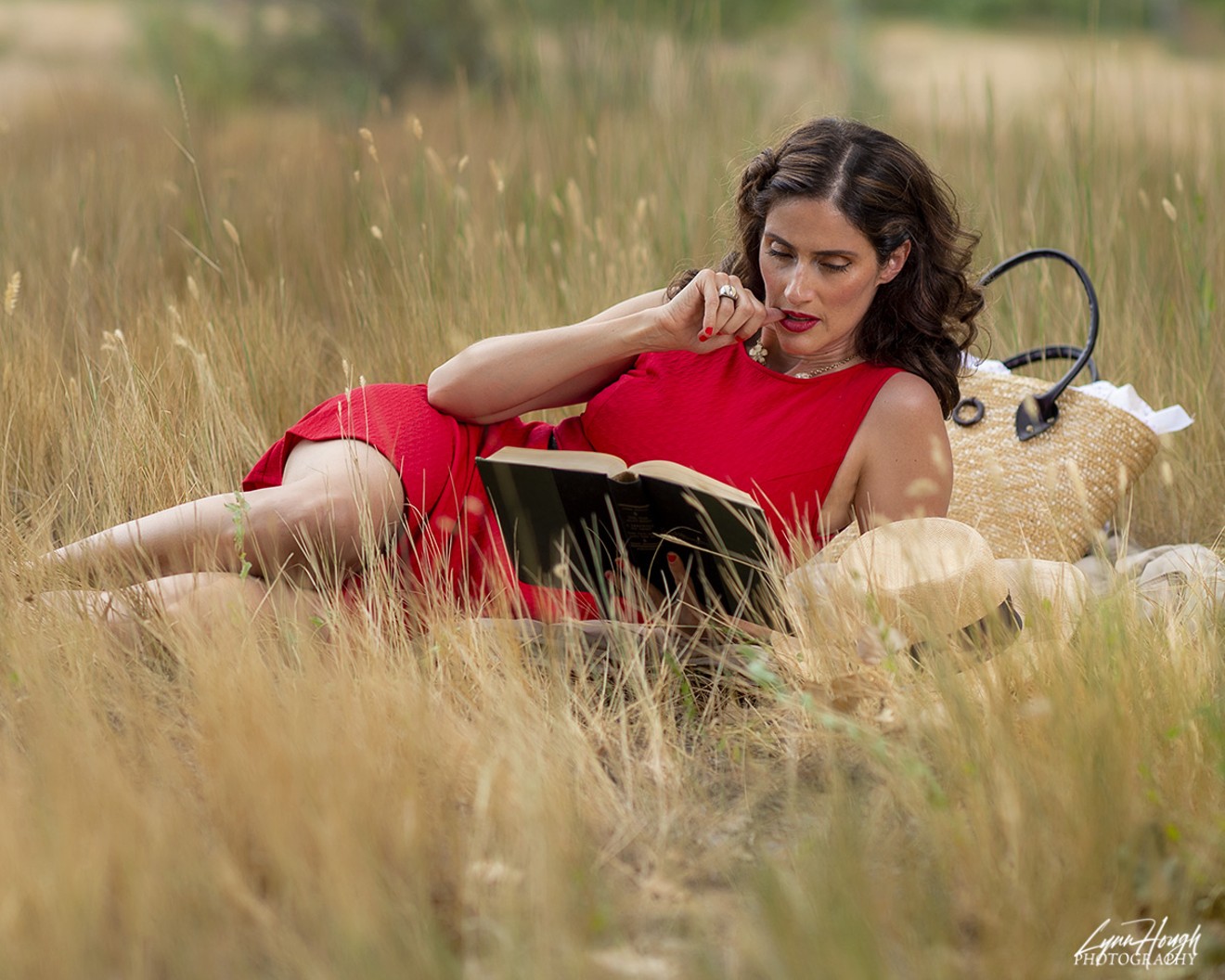 Denver writer Nancy Stohlman, outstanding in her field. Lynn Hough
Nancy Stohlman has been a fixture in the local literary scene for years — and she’s got a long history with one of the shortest forms. Still, flash fiction is in many ways just coming into its own, so it makes sense that how-to books like Stohlman’s new Going Short: An Invitation to Flash Fiction would become necessary. And it makes sense that it’s Stohlman who's bringing it to market: Her flash fiction has won national awards and become an event right here in Denver — the Fbomb readings at the Mercury Cafe — and now also in New York City.

We spoke with Stohlman about Going Short, about the flash form in general…and about her national literary plans for the Mile High City.

Westword: You're doing something a little different this time, writing about the form instead of writing in it. What inspired you to write a flash-fiction how-to?

Nancy Stohlman: This book has been in my head for almost a decade. At that time, we — writers, teachers — were relying on flash-fiction anthologies, because there weren’t flash-fiction craft books. Finally, after years of being asked for flash craft book recommendations, I decided to fill the gap. I started the actual writing in 2012, and over the eight years of refining this book, the genre has changed and matured; I’ve changed and matured. I’ve added, subtracted, rewrote it from scratch multiple times, and even published three fiction books in the time it took me to bring this one to fruition!

And in the end, it’s really my own personal flash fiction manifesto, the culmination of everything I know from a dozen years on the front lines of a literary movement.

What's your definition of flash fiction? Is it just a matter of story length?

Flash fiction has two important components: It’s under 1,000 words — but often less than that — and it tells a story. You must have both. It’s often confused with, but not the same as, prose poetry or vignettes or character studies. Just because something is prose and under 1,000 words does not make it flash fiction. Flash fictions are masterful miniatures, concentrating everything delightful about narrative and tension and storytelling in a tiny, confined space. 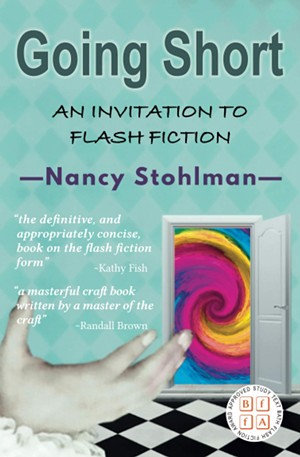 Ad Hoc Fiction
The book has a badge on the cover that says it's an "approved study text" from Bath Flash Fiction; BFF is a major player in the still-emerging flash form. What has your experience been like with Bath, both in the past and as a published author under their imprint?

Bath Flash Fiction — which also includes [publisher] Ad Hoc Fiction and the Flash Fiction Festival — has stepped boldly into the flash-fiction arena as a leader and a vortex of community. Going Short was originally going to be released as part of the annual 2020 Flash Fiction Festival (enter quarantine), but I think the timing has been perfect, because quarantine has also made people more ready than ever to concentrate on their creativity. And Ad Hoc Fiction is the perfect publisher for this book because the form has been international from the start; writers from the U.S., U.K., Europe, Australia and New Zealand are all bringing the form to fruition in the English-speaking world, for instance. I’ve learned so much working with international writers and getting an international perspective.

Let's go back to the beginning. How did you come to embrace flash fiction? What's the origin story for Nancy Stohlman, author?

It was 2007. I had written three (unpublished) novels and was beating my head against a fourth when I discovered flash fiction in grad school. You mean I don’t have to say all that other stuff? It was a turning point. Until then, I had felt beholden, as many authors do, to publishing conventions; I’d been writing to the finish line of genre expectations rather than really listening to my stories, listening to what they wanted. Flash fiction liberated me. The continuum swung the other way. Now, instead of writing to a finish line, I was doing the opposite: blasting through everything unnecessary and seeing how much I could not say. And I’ve honestly never looked back.

So what do you think flash fiction can do that other fiction forms can't? Or do you think form is just a matter of approach, and not of ability?

I like to call flash fiction the love child of poetry and prose — all the attention to language and emotional compression of poetry with the narrative arc and storytelling tension of prose in one instantaneous, glorious, brief journey. And creativity, ingenuity blossoms under constraints, so there is much play, much invention and experimentation happening in those small spaces. Flash fiction can extract the essence — distill the nugget. And people who misinterpret it as “Twitter” literature or “short attention span” literature are clearly unfamiliar with the miniature as its own complex, nuanced art form. In these confined spaces, we are telling stories that have never been told before.

Impossible to choose! Recently I was the final judge for the Bath Flash Fiction contest, and the winning story, “Angie,” by Marissa Hoffman, is a poignant example of the power of flash fiction.

You founded the always-entertaining Fbomb reading series back in 2013...COVID-interruption aside, how did that event change over the past seven years? What's the connection between the flash form and performance? And perhaps most important, is Fbomb coming back post-pandemic?

COVID can’t stop The Fbomb! Both the Denver Fbomb and the NYC spin-off, Fbomb NYC, have been going strong via Zoom, with the unexpected bonus that we’ve been able to feature people and audiences from other time zones and other countries. So lemons out of lemonade there. But we in Denver, of course, miss our gatherings at the Mercury Cafe. The Merc has been a home for so many artists, and I can’t imagine Denver without it.

And you’re right: Fash fiction lends itself beautifully to performance. It’s good on the stage for the same reasons it’s good on the page: The audience can have a complete, complex, memorable experience from beginning to end in under five minutes.

Going Short has a ton of great advice in its pages, but I dog-eared the section in my copy called "A Thin Line: Implication and Confusion" because so many writers I've worked with have hit that wall. How does a writer know when they're explaining enough? How do writers successfully walk that tightrope?

Interesting...that was one of the last chapters I wrote. After years of teaching “chipping and chopping” — and the many ways we shrink our texts — I began to notice people going too far in the other direction. They had taken too much out. Yes, we have to become masters of implication and create white space that invites a reader into the story. But we also have to leave breadcrumbs so they don’t get lost.

How do you know what’s too much? Not enough? It’s like cooking: a lot of trying and testing and adjusting and tasting, seesawing back and forth to find that perfect balance. And…then again sometimes you just need to bring in a reader — you know, to taste the sauce and see if you’re crazy.

Favorite place in Denver to write? What about a well-loved spot that's no longer there — that place you miss the most?

I’m extremely sentimental, and I get panicky watching places close over these last months. It took me months to get over Le Central even before COVID. Sigh.

I came to Denver in the mid-late ’90s, so I’ve watched several waves of change. I’ve spent many, many writing group Wednesdays at Pablo's on Sixth, or Sputnik, or St Mark’s and the Thin Man. The Market. The old Gypsy Cafe and Gabor’s. Every holiday season, I miss the Tattered Cover in Cherry Creek — I did my first reading there in 2003. And Ichabod’s Used Books on Broadway — even though the space has become Mutiny Cafe, which is also awesome, I loved the dusty drama of those old book mazes.

What is it that inspires you about the Colorado literary scene? How does Colorado play into your work, both now and moving forward?

My entire literary “coming of age” happened here. I moved to Denver after living in a van and reading the Beats and traveling with the Renaissance festival. I went to UCD and the Kerouac School in Boulder. I taught for ten years on the Auraria campus and now CU Boulder. I helped start the Denver Lit Crawl, and, of course, the Fbomb, and last year my flash-fiction collection, Madam Velvet’s Cabaret of Oddities, was a finalist for the Colorado Book Award. So Colorado has been very good to me.

And…I probably shouldn’t tell you this, but I have a secret mission to make Denver the Flash Fiction Capital of the U.S. So I guess the secret is out.

Nancy Stohlman’s new craft book, Going Short: An Invitation to Flash Fiction, is available now from Ad Hoc Fiction.
KEEP WESTWORD FREE... Since we started Westword, it has been defined as the free, independent voice of Denver, and we'd like to keep it that way. With local media under siege, it's more important than ever for us to rally support behind funding our local journalism. You can help by participating in our "I Support" program, allowing us to keep offering readers access to our incisive coverage of local news, food and culture with no paywalls.
Make a one-time donation today for as little as $1.