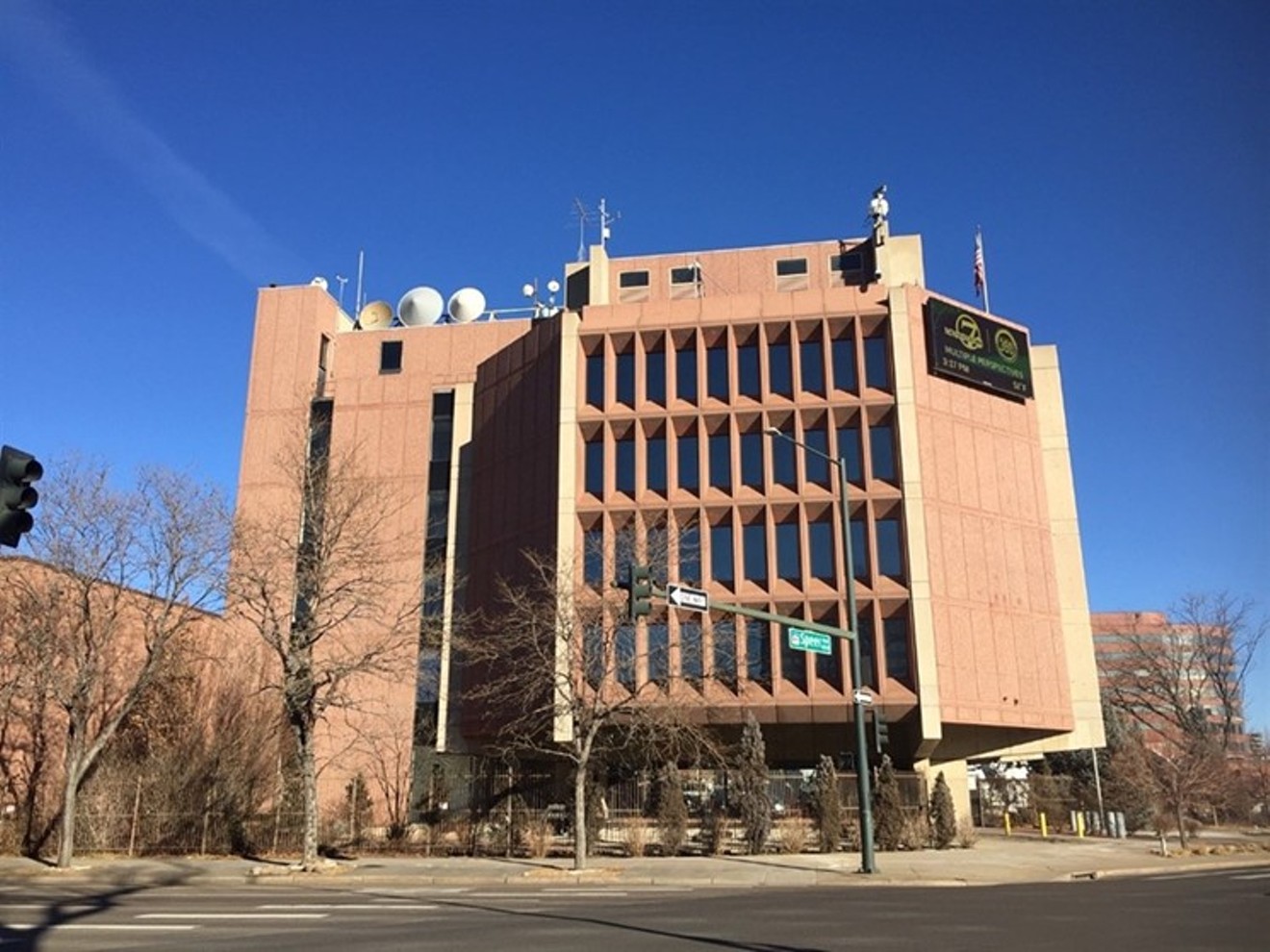 The discussion of landmark status for Channel 7's building brought Brutalism into focus. denvergov.org
The Channel 7 building is the latest local landmark to be facing demolition.

The campaign to save the building at 123 Speer Boulevard has followed a well-trod trail for those of us in the Mile High City who have paid attention to historic preservation here — or the lack thereof. First, wealthy-if-insensitive owners announce plans to demolish a historic structure — in this case, E. W. Scripps out of Cincinnati, which owns Denver7. Second, civic-minded volunteers rise up to challenge the decision, attempting to convince said owners to save and reuse the place. This time, the civic-minded saviors are Bradley Cameron, Michael Henry and David Lynn Wise.

At this stage, a nomination is prepared for a more or less objective evaluation to be made by the Denver Landmark Preservation Commission. Analyzing the building under DLPC guidelines led the commission to a landslide vote of six to one in favor of landmark eligibility. The applicants had demonstrated that the building exemplifies the Brutalist style. It was designed by the firm of Fulmer & Bowers and features a high level of construction craft. It was built in 1969 as a TV station during the heyday of broadcast television in America. The tower sitting at the intersection of Speer and Lincoln Street acts as a sentinel at the southeast entrance to downtown. As a result, it qualifies as having architectural, historic and geographic significance, respectively.

This is the point at which Denver’s utterly toothless landmark ordinance comes into play. The chorus of developers’ shills — er, I mean Denver City Council — second-guesses the decisions made by the commission and pretends their objections are based on their refined aesthetic sensibilities rather than simply because they are in the pocket of the wealthy and powerful interests that are literally tearing the city down right now in order to make a quick buck. One thing you can say about Denver City Council members, though: While they may not know how to solve a real problem like the homeless crisis, they can do something about made-up ones, like the scourge of rampant historic preservation. (Do I need to tell you that on May 10, council made the decision not to save the building — by a unanimous vote?)

When Channel 7 bites the dust, it will essentially erase the last evidence of the Brutalist presence that once graced Speer Boulevard, with Eugene Sternberg’s circa 1970 Denver General Hospital all but hidden by overbearing additions on the boulevard side and William Muchow’s 1969 Currigan Exhibition Hall completely scraped to build the Colorado Convention Center.

The failed struggle does have a bright spot, however. It’s brought Brutalism back into focus, reviving interest in a sophisticated, modernist architectural style that represented the culmination of various concepts that had originated in the International Style, Formalism and Expressionism. These ideas, taken up by the architectural intelligentsia in the 1960s and ’70s, were marked by an interest in exploring the glamorous possibilities of humble materials such as rusting metal, raw concrete and cast aggregate. Brutalist buildings are characterized by their lively surfaces and expressed engineering, two attributes that made them expensive to build, thus limiting their application to high-status commissions such as corporate headquarters, banks and museums. That means, of course, that they are relatively rare, especially here in Denver. 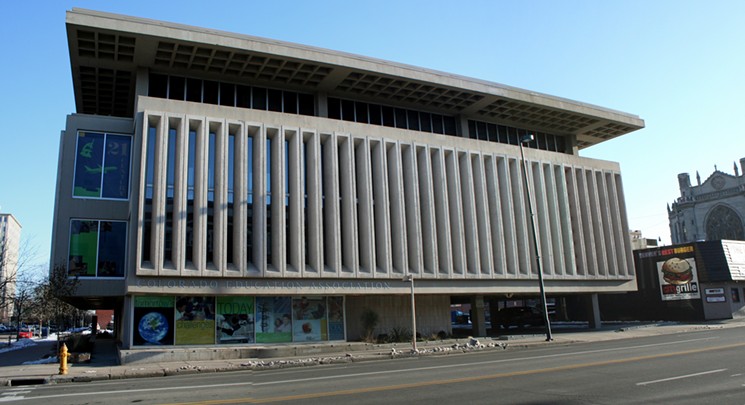 The Colorado Education Association headquarters, 1500 Grant Street.
Jeffrey Beall
There are only a handful of other Brutalist buildings downtown, most notably Muchow’s 1964 Colorado Education Association headquarters at 1500 Grant Street, which was originally built as a bank. Despite its gritty East Colfax surroundings, the CEA building is sublimely elegant. The ground floor is recessed with a double-floor stack cantilevered above it, and at the top, the roof’s gridded coffering on the underside is visible from the street. Since that roof is mounted on set-back pillars, it seems to be floating above the glass-fronted fourth floor. The most dominant features are the repeated, vertically oriented sun-screen aggregate grills mounted over the windows on the second and third floors and the notched back corners of the building itself.

A few other significant buildings downtown show a relationship to Brutalism, including the 1960 Sheraton Hotel tower of I.M. Pei’s partly lost Zeckendorf Plaza at 1550 Court Place, and the Denver Art Museum’s 1971 Martin Building by Gio Ponti, at 100 West 14th Avenue Parkway — though in both cases, the starchitects in charge created their own distinctive variants of the style. 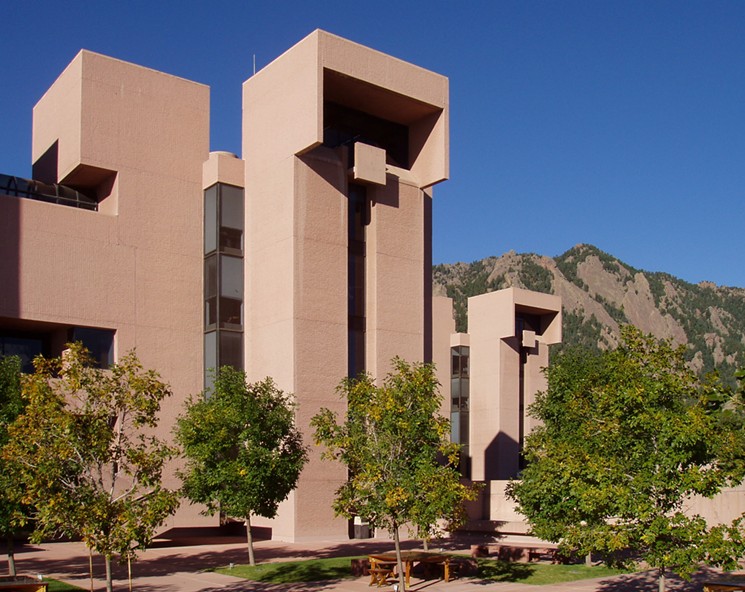 I.M. Pei's National Center for Atmospheric Research in Boulder.
Daderot
Pei did, however, go full-tilt Brutalist with his 1961-1967 National Center for Atmospheric Research at 1850 Table Mesa Drive in Boulder. Built of a red-colored, cast-in-place aggregate, the multi-building complex replete with slits and cantilevered overhangs sits hard against the mountains so that it reads like a natural rock outcropping. Along with the Ponti, NCAR is one of the state’s most important works of architecture in any style.

The region’s chief proponent of Brutalism was Sternberg, who produced a number of fine examples in the southern suburbs, notably the Arapahoe Community College main building at 5900 South Santa Fe Drive in Littleton, which was completed in 1974. In this project, Sternberg exploited the sculptural potential of cast concrete used for hoods over or beside the often very deeply set windows meant to shield the interior from the sun, as well as for cutouts that serve as entry canopies, or even simply as pass-throughs to get inside. The elaborate and multi-part building suggests an ancient citadel with one level stacked above another. The newer addition on the north side could have been better, but it also could have been much worse. And don’t miss Sternberg’s closely related Miller Building at 1901 West Littleton Boulevard, also from 1974. 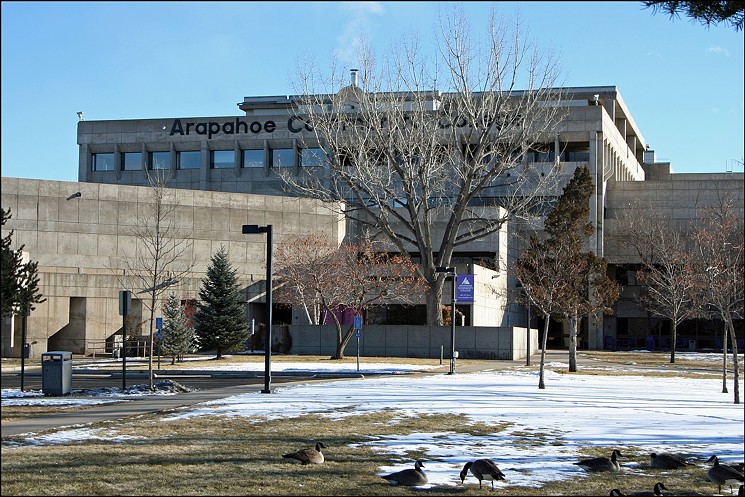 Arapahoe Community College, 5900 South Santa Fe Drive.
Jeffrey Beall
In the early 21st century, Brutalism is really in the crosshairs of the philistines — much as mid-century modern was twenty years ago. People love to point and laugh at Brutalism, and it’s made me wonder if the style’s name, Brutalism, plays a role in inspiring that mockery. The term is a reference to breton brut, “raw concrete” in French. Imagine if it had instead been called Bretonism. Would that have made it less of a target of the style’s gape-jawed detractors?
KEEP WESTWORD FREE... Since we started Westword, it has been defined as the free, independent voice of Denver, and we'd like to keep it that way. With local media under siege, it's more important than ever for us to rally support behind funding our local journalism. You can help by participating in our "I Support" program, allowing us to keep offering readers access to our incisive coverage of local news, food and culture with no paywalls.
Make a one-time donation today for as little as $1.