California architect Lawrence Pepper envisioned the outdoor space at Cableland. Kenzie Bruce
“The best is good enough for me.” That was a favorite saying of Bill Daniels, the pioneering cable-TV entrepreneur who helped turn Denver into the world’s cable capital.

When he passed away in 2000, Daniels left behind the billion-dollar Daniels Fund to continue his philanthropic work, as well as Cableland, the circa 1987 post-modern mansion that he’d built at 4150 Shangri-La Drive and later gifted to the city, with the idea that it would serve as the official residence of the mayor.

So far, no Denver mayor has occupied the mansion, and none of the current mayoral candidates say they plan to move in if elected. (It’s temporarily housed a few appointees who’d left other cities to take roles in mayoral administrations; former police chief Robert White resided here after Mayor Michael Hancock hired him early in his first term, for example.)

While attempts to sell the property have been thwarted (then-mayor John Hickenlooper tried in 2010, but Denver City Council balked), the property is run by the Cableland Home Foundation, funded by a $3 million endowment left by Daniels, so that the Denver budget does not have to cover the costs of keeping it up. (The foundation board includes three mayoral appointees.) The facility s currently used for official city events, as well as rented out for worthy fundraisers. 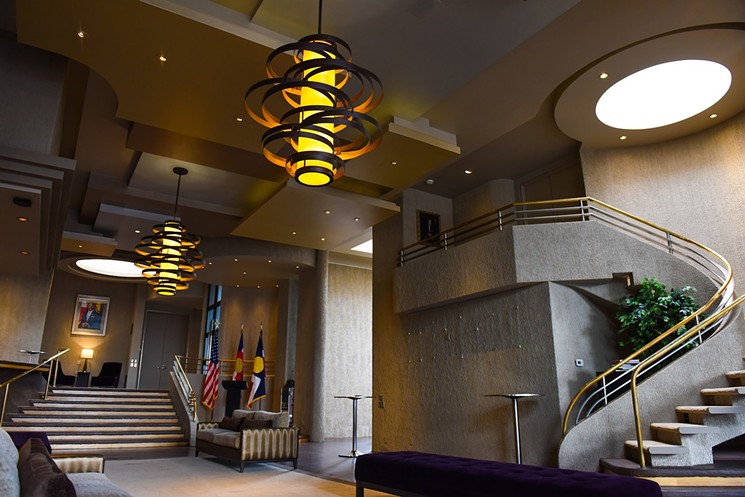 Inside the public space at Cableland.
Kenzie Bruce
Early this year, the foundation applied for landmark designation for Cableland, which would protect the structure from future demolition. Denver’s Landmark Preservation Commission determined that it met the criteria not just because of Daniels’s historic role in the cable industry, but since the building itself was as “an exceptional example of residential postmodern architecture in Denver,” according to the commission report, which also noted that “the original character of Cableland remains intact.”

As the story goes, the 32-year-old Daniels, who was born in Greeley and saw service both in World War II and Korea, was working as an insurance salesman and traveling from Casper, Wyoming, to New Mexico when he stopped in a Denver bar to get a sandwich. A box over the bar was showing black-and-white pictures of what seemed to be a fight. The former Golden Gloves boxing champ asked the bartender what it was.

“Television,” the bartender said. The fight was on Channel 2, Denver’s first and then only TV channel.

Daniels didn’t have any technical background, but he knew that if he could get this signal to then-TV-free Casper via an almost unknown invention called cable, it would be a hit. And not just in Casper but throughout the West, where population centers (and so TV stations) were few. He started researching, and when Daniels introduced cable to Casper in late ’53, TVs sold out in the town. 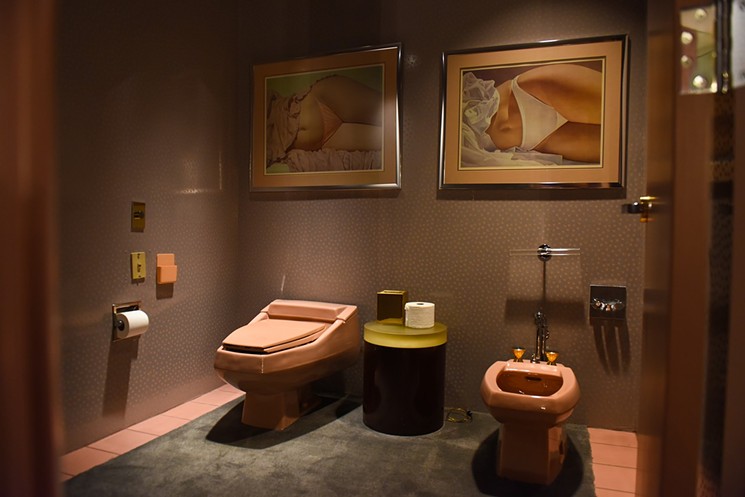 Pretty in pink: a Cableland bathroom.
Kenzie Bruce
In 1958, Daniels relocated to Denver and started his own company, Daniels & Associates, which brokered the sale of cable systems all over the country. Over the next three decades, Daniels & Associates became the premier brokerage for the cable-television industry; it also contracted to run several cable systems. Daniels was the largest owner of many of those systems, including the former Mile High Cablevision, which first brought cable to Denver. Cable made Daniels one of the wealthiest men in the country, wealthy enough to venture into sports (he owned the Utah Stars) and sponsor professional boxer Ron Lyle. And to create the mansion known as Cableland.

He built the 19,500-square-foot mansion in an area of Hilltop inspired by Shangri-La, the fictional utopian community in Lost Horizon, a popular book, then movie, in the ’30s. But Cableland was all ’80s: a mauve-and-gray mansion (with pinkish cement and pinkish tile by the pool) with big public spaces for entertaining; a state-of-the-art (for the time) media room with 64 televisions on a single wall, one for each station on the Mile High Cablevision network; thirteen bathrooms and four bedrooms, including a master with a fireman’s pole leading to the floor below. The home was designed by California architect Lawrence Pepper and interior designer Andrew Gerhard, and the California influence shows in the outdoor areas, as well as the Dynasty-ready glamour indoors. (Although that hit ’80s TV show was allegedly set in Denver, it was filmed in the Golden State).

While there have been two renovation projects since the building was gifted to the city, the private rooms remain largely untouched. The first update, done in conjunction with the dedication of Cableland as the official mayor’s residence in 2002, was overseen by then-First Lady Wilma Webb, and included adding a photograph of Daniels by the front door, installing a carpet with the city seal, and creating a new entrance with handicap accessibility. A second project in 2012 updated the original public entertainment space, painting the mauve walls a more neutral taupe and adding a display of things made in Denver.

Much like Daniels’s fortune. The best is good enough.
KEEP WESTWORD FREE... Since we started Westword, it has been defined as the free, independent voice of Denver, and we'd like to keep it that way. With local media under siege, it's more important than ever for us to rally support behind funding our local journalism. You can help by participating in our "I Support" program, allowing us to keep offering readers access to our incisive coverage of local news, food and culture with no paywalls.
Make a one-time donation today for as little as $1.