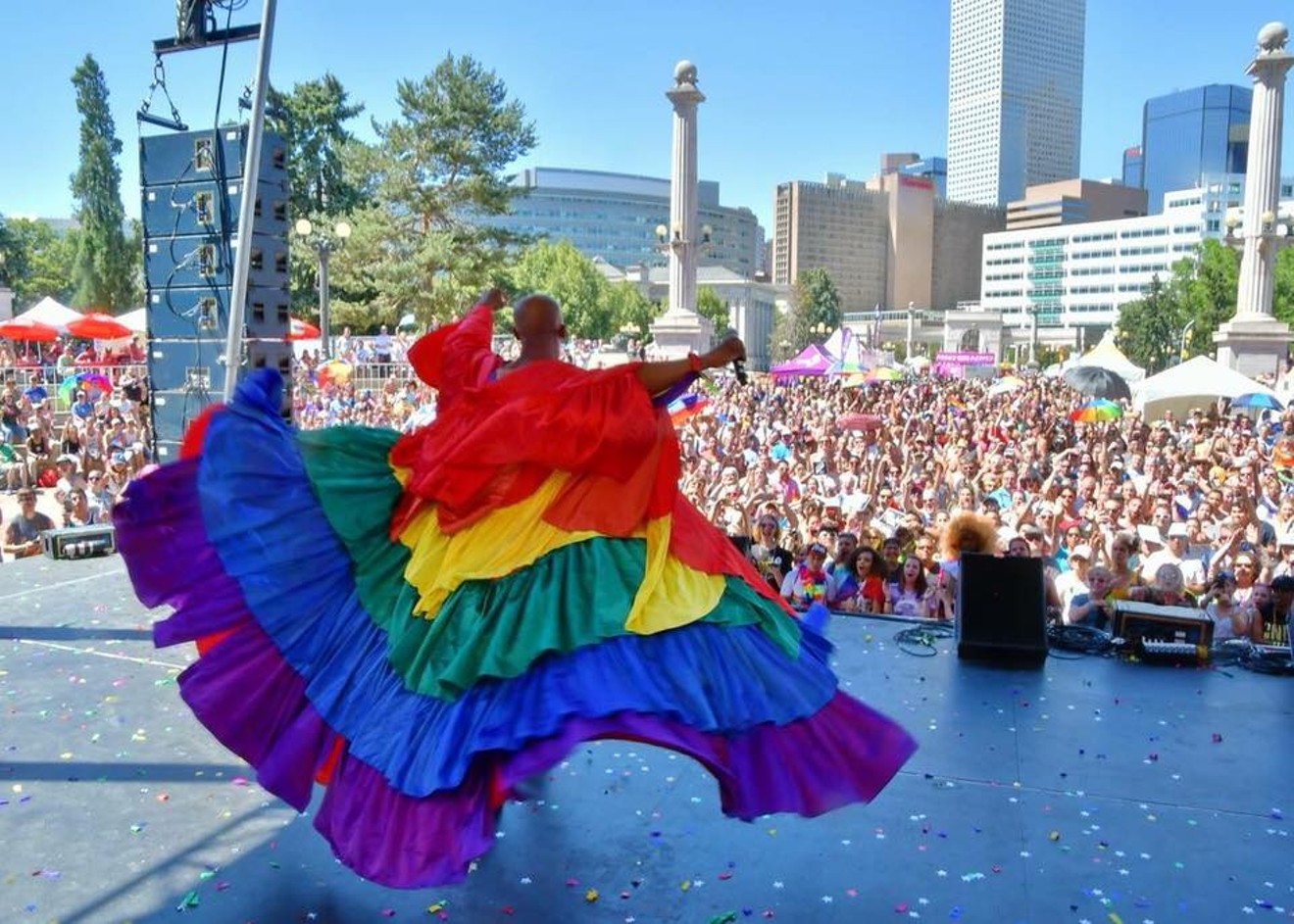 For the first time since 2019, Denver will have its full, in-person PrideFest in Civic Center Park. Courtesy of DeMarcio Slaughter
Pride celebrations are finally back in full swing after two years of socially distanced, virtual, limited-capacity and livestreamed events. The Center's PrideFest in Civic Center Park will be making an exciting comeback along with the Coors Light Denver Pride Parade, but there are plenty of other ways to celebrate, too.

Whether you're looking for a club night, a party, a sober-positive gathering or even a religious service, there's something for you on this list.

Mortified Live: Pride Edition!
Thursday, June 23, 8 to 10 p.m.
The Oriental Theater, 4335 West 44th Avenue
Part comedy show, part confessional, Mortified Live has entertained audiences in over twenty cities worldwide, from Austin, Texas, to Paris, France. The show consists of adults sharing their old diary entries, teenage art projects and more in front of an audience of total strangers. This special Pride edition is sure to have some cringe-inducing coming-of-age stories, awkward first date retellings and plenty of teenage angst. Tickets are $16, and a portion of all ticket sales will be donated to One Colorado, an advocacy group for LGBTQ+ people and their families in Colorado. This is an 18+ event. 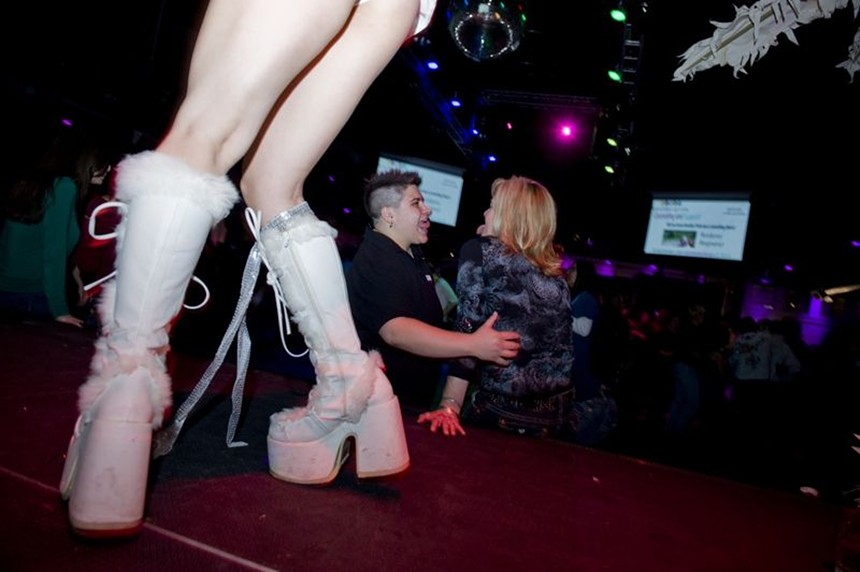 Babes Around Denver has been throwing women's parties for two decades.
Kate Levy
Babes Around Denver Presents: Women's Pride Campy Girls
Friday, June 24, 7 p.m.
Tracks, 3500 Walnut Street
For all the sapphics out there, don't miss the largest women's Pride party in the country. Brought to you by Babes Around Denver, which also hosts the largest monthly women's party in America, the event will include pop-up performances from go-go dancers, aerial, burlesque and drag performers and more. DJ Soup, DJ Tatiana and DJ Blaque Gurl will be spinning in the main room and lounge, starting with a country music set from DJ Soup. The theme is "Campy Girls," so come in your best Troop Beverly Hills-inspired look. Everyone is welcome, as long as they're respectful. Tickets are $20 in advance online.

Drag Nation: Talent Show Featuring Willow Pill
Friday, June 24, 8 p.m.
ReelWorks, 1399 35th Avenue
While the Women's Pride Party happens at Tracks, Tracks Pride is also hosting Drag Nation: Talent Show next door at ReelWorks. This Pride edition of Tracks' highly anticipated monthly drag showcase will include RuPaul's Drag Race season fourteen winner and Denver native Willow Pill, in her first hometown performance since snatching the crown. She's bringing a mysterious special guest with her, but you'll have to attend to find out who it is. Pill will also be joined by some of Denver's best drag entertainers, with support from Tracks' International Dance Crew. General admission tickets are available online for $30, but the event is also included in Tracks' VIP Pride Weekend Pass for $105, which is the only option left if you want to attend the pre-show meet-and-greet with Pill (all other meet-and-greet packages are sold out).

Queer-Ilderness: A Mild-Wild Pride Event
Saturday, June 25, 6 to 11 p.m.
History Colorado Center, 1200 Broadway
Queer-Ilderness: A Mild-Wild Pride Event is a Pride celebration specifically for queer teenagers, who are often unable to attend Pride events at bars and clubs because of alcohol sales. Anyone thirteen and up (including adults) is welcome to join in on the fun, which will include a Dungeons & Dragons campaign, an arts-and-crafts station, a scavenger hunt, trivia, lawn games, a selfie station, a clothing swap, lots of dancing to tunes by DJ Kaptain, and a drag performance by Juiccy Misdemeanor. From 7:30 to 8:30 p.m., there will be a runway competition for aspiring drag performers, with three categories: ’90s Grunge, Queer in the Wilderness and Your Favorite Historical Queer. Attendees will also be able to experience History Colorado's brand-new Rainbows & Revolutions exhibit during the event. Light refreshments will be provided, but there will be no alcohol served. Tickets are $13 for ages thirteen through twenty, and $21 for those 21 and up. Anyone unable to afford the cost is encouraged to reach out to Jenny Chu at [email protected] for a discount code or Community Access Ticket.

Denver Dyke March & Rally
Saturday, June 25, noon to 3:30 p.m.
Starting at The Center on Colfax, 1301 East Colfax Avenue
The Denver Dyke March & Rally was founded to re-center queer women and femmes at Pride, which is often perceived as overwhelmingly male and only catering to a small demographic of the LGBTQ+ community. This year, the thirteenth annual Denver Dyke March & Rally will gather at The Center on Colfax at noon on Saturday, then head to the west steps of the Capitol at 1 p.m. for the rally,  which will include speeches from community leaders. The rally will start at 1:45 p.m., and at 3 p.m. the group will march to Denver PrideFest's center stage. This year's focus is on "Progression Over Oppression: Voices of Our Queer BIPOC and Youth," and will highlight queer women of color. Speakers include drag queen Coco Bardot and comedian/dominatrix Becky Taha'Blu. This will be the first in-person Denver Dyke March & Rally since 2019, so don't miss out on its grand return. 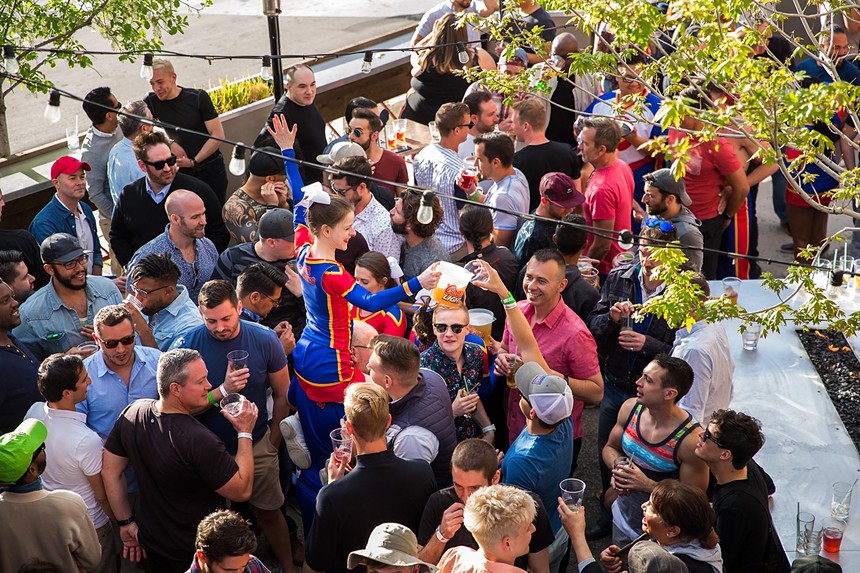 Located in the heart of downtown Denver, Triangle is sure to be packed for Pride.
Danielle Lirette
Triangle Pride in Paradise Block Party
Saturday, June 25, 2 to 10 p.m.
Triangle, 2036 North Broadway
Triangle is taking to the streets to celebrate Pride this year, literally. The North Broadway bar will be shutting down four lanes of traffic (one more lane than last year) to expand its Block Party festivities during PrideFest. Triangle Pride is doing everything bigger this year, including more bars (a whopping fourteen), more bathrooms, more space and more entertainment. DJs include Kaleena Zanders, Bexxie, CALAGNA, Karsten Sollors and Anthony Allie. Come in your tropical resort-wear best, and if you want to take the party into the night, stick around for Triangle's 90's in Neon party, which requires a separate ticket and will go until 2 a.m. Early-bird tickets for the Block Party are still available online for $25 until they sell out; regular tickets are $35 and can be purchased at the door or online. Triangle is also offering Pride weekend passes ($200 regular; $300 for VIP) that include all of its Pride events.

Call to Arms will host its own annual parade of craft beer brewers on Saturday, June 25th.
Call to Arms Brewing Company
Call to Arms Brewing Pride Fest
Saturday, June 25, noon to11 p.m.
Call to Arms Brewing Taproom, 4526 Tennyson Street
Call to Arms Brewing's Pride Fest makes its triumphant return this year after a two-year hiatus. Starting at noon, the Berkeley brewery will be serving food from ¡Ay Ay Ay! Burritos & Cravings, along with four specially brewed Pride-themed beers: Narnia of Partya, a kiwi hefeweizen; My Favorite Color Is You, a dry-hopped lager; You're Not Gay, I Am, a double-dry-hopped West Coast IPA; and the Alumni Beer, a tart tropical IPA brewed as a collaboration between CTA and ten other Colorado breweries. Narnia of Partya is the official beer for CTA's Pride Month Fundraiser, and throughout June, 10 percent of that beers' sales will be donated to the Transgender Center of the Rockies, as well as 10 percent of all beer sales during CTA's Pride Fest on Saturday. At 2 p.m., CTA's very own Pride Parade, which includes several other partner breweries, will march down Tennyson Street, starting at the Highlands Garden Village and finishing at CTA. At 4 p.m. there will be live music from Hey Lady!, a B52's tribute band. If craft beer is your thing, CTA is the place for you to celebrate Pride.

X Bar's patio is an ideal spot to watch Sunday's Pride parade.
Westword
Flaming Flamingo Finale at X Bar
Sunday, June 26, 8:30 a.m. to 2 a.m.
Xbar, 629 East Colfax Avenue
Send Pride off in style with X Bar's full-day finale, jam-packed with music, food, drinks, drag and more. It all starts at 8:30 a.m. with a viewing party for the Coors Light Denver Pride Parade, which will pass right by X Bar as it makes its way down Colfax. After the parade, there will be the Liquid Brunch with food from the Brutal Poodle from 12 to 4 p.m. International DJ Ben Bakson will be spinning on the patio from 5 to 9 p.m., followed by "The House," a drag show starring all of X Bar's resident performers and DJs hosted by Kelela C. and Kai Lee Mykels. Tickets are $25 for a Sunday pass, but there are also several all-inclusive Pride package options available that include the Flaming Flamingo Finale.
KEEP WESTWORD FREE... Since we started Westword, it has been defined as the free, independent voice of Denver, and we'd like to keep it that way. With local media under siege, it's more important than ever for us to rally support behind funding our local journalism. You can help by participating in our "I Support" program, allowing us to keep offering readers access to our incisive coverage of local news, food and culture with no paywalls.
Make a one-time donation today for as little as $1.