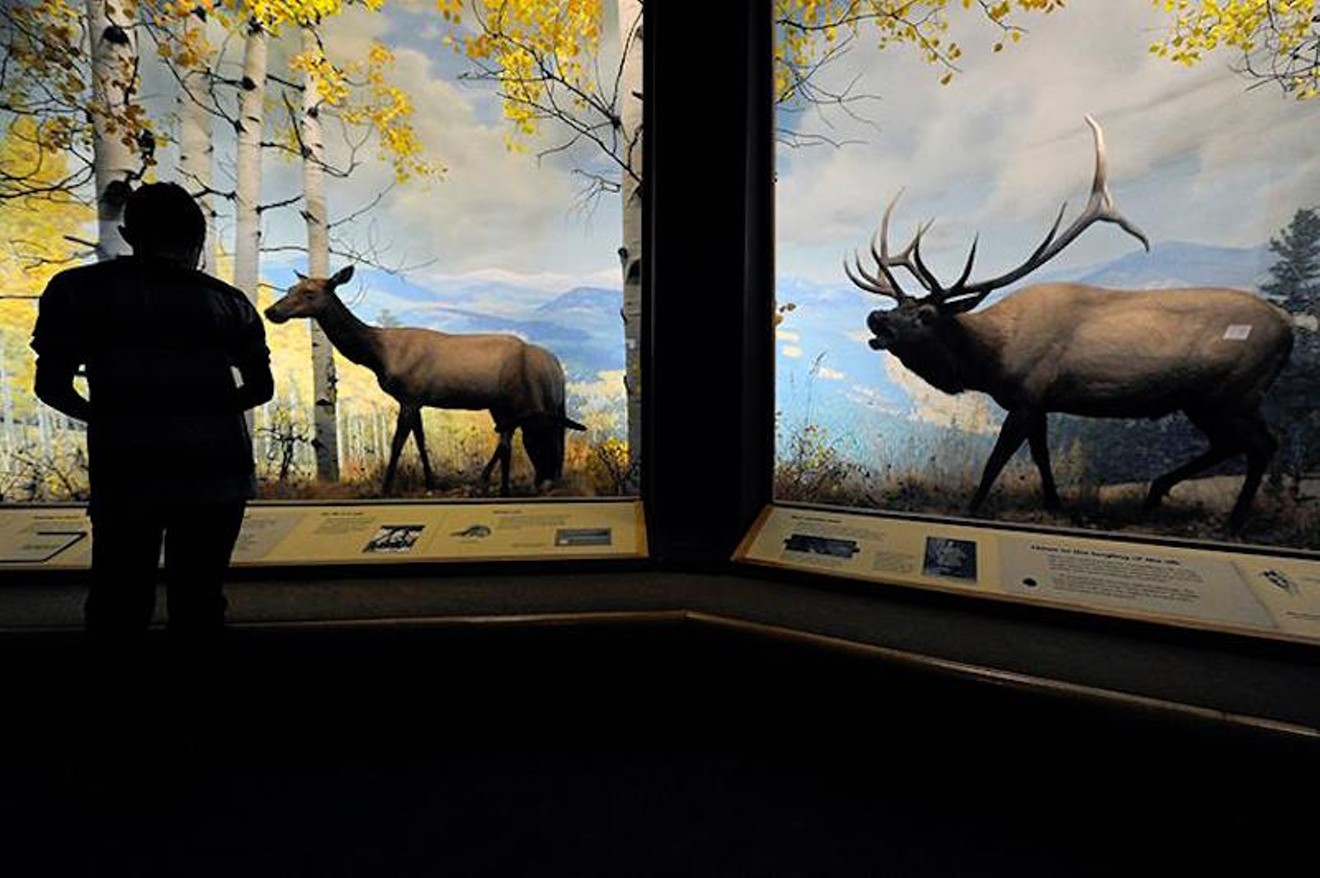 Enjoy a free Narrators show at the Denver Museum of Nature & Science's Free Night on Saturday, November 4. Denver Museum of Nature and Science
Mile High comedians, artists, storytellers and musicians hustle week in and week out to provide the best free and cheap entertainment in the Centennial State, and all our readers need is a crisp Hamilton and an open mind to take advantage of everything this city's creative community has to offer. Even the brokest local can attend any of the following ten events for ten dollars or less; four cost nothing.

Hazel Miller
Concert at the Cube: Hazel Miller
Thursday, November 2, 6:30 p.m.
The Cube Stapleton MCA
Free
Music lovers rejoice, for the Master Community Association of Stapleton is hosting a series of free concerts throughout the fall at the Community Cultural Center, affectionately known as the Cube. The Stapleton MCA concert series continues this week with a performance from one of the area's most treasured singers: Hazel Miller. A celebrated actress, songwriter and chanteuse, Miller, one of the Mile High's most powerful songstresses live in concert, is always worth seeing. The chance to do so for free is irresistible. Visit Stapleton MCA's Concerts at the Cube events page for more details.

WRITE CLUB Denver: Turn and Face the Strange
Thursday, November 2, 6 p.m.
Syntax Physic Opera
$10 suggested donation
Although writers appear to be a harmlessly bookish bunch, a fierce sense of competition lurks beneath our tweedy and bespectacled facades. Write Club Denver, a self-described "literary thunderdome," puts that subtext into the spotlight with a series of head-to-head competitive readings from Denver-based authors, comedians, performers and creatives. With an earlier start time befitting the season's ever-shortening days, November's bout pits Brice Maiurro against Rachel Trignano in a narrative debate between "Routine" and "Break," followed by Laura Condi representing "Dawn" against GerRee Hinshaw's "Dusk," before Josh Hartwell and Colin Iago McCarthy settle the age-old question of "Long" or "Short." Doors open at 6 for the 7 p.m. showtime. A suggested donation of $10 will be collected at the door, though no one will be turned away. Visit WRITE CLUB Denver's Facebook events page to learn more.


Friday Night Weird: The Royal Tenenbaums
Friday, November 3, 8:45 p.m.
Boedecker Theater, Boulder
$6.50 to $12
A staple of the Dairy Arts Center's programming calendar, the Friday Night Weird screening series is a monthlong film festival inspired by a different theme each month. As the Thanksgiving holiday pulls readers back into the orbit of their families, there's no greater counter-programming than three films inspired by every stripe of familial dysfunction. The series gets off to an appealingly twee start with Wes Anderson's The Royal Tenenbaums. Among the meticulous auteur's best films, the bittersweet tale of talented siblings gone awry somehow captured the cultural zeitgeist while occupying a tweedy cinematic universe that doesn't resemble reality in the slightest.

Daniela Aguilar
Penny Admission for Colorado Residents
Saturday, November 4, 10 a.m. to 5 p.m.
MCA Denver
One cent
For Coloradans who love art but balk at admission fees, First Saturdays are a godsend. If your tastes skew modern, check out the Museum of Contemporary Art any time from 10 a.m. to 5 p.m. and see the entire collection all for one red American cent. With the Saber Acomodar exhibition, which highlights 25 different artists, currently on display, it's well worth paying MCA's modest admission fees. But if you're extra-thrifty and don't mind a crowd, a copper Lincoln is all you'll need to get in on Saturday. This deal is only available to Colorado residents, so pay up, tourists. Visit MCA Denver online to learn more.