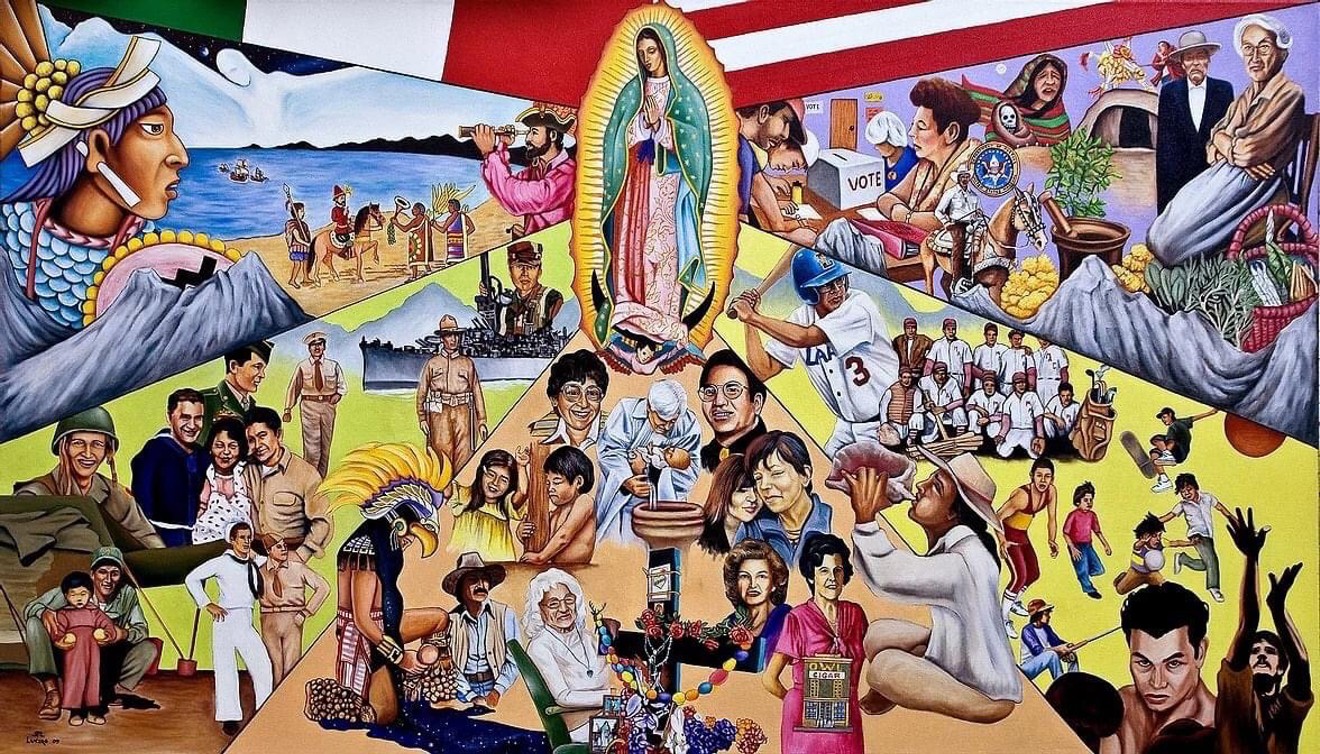 The muralists transformed Colorado and Wyoming. Stevon Lucero
Someone far wiser than me once said, “We’re burying too many good people lately.” The end of November and beginning of December were devastating to the art world, because we lost two of the Chicano art movement’s giants and I lost two close personal friends (as well as my beloved mother, Mary Isabelle Revello, known as Mary Sanchez). 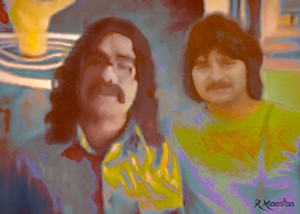 Stevon Lucero and Roberto Lucero.
R. Maestas
I met Roberto in the early ’70s, as we were both starting our journey through the art world. He had done the mural at the Westside Action Center at 11th and Santa Fe, and I had done murals for Interstate Research Associates on 16th Street, the Denver Community Development Corporation and the National Chicano Health Organzation (NCHO). These murals were all included in Exxon’s Barrio Art exhibit; that show was seen everywhere!

On a fateful day in 1976, Emanuel Martinez invited us to his studio to meet Andrew Manning and Richard Barrera, two artists who had been studying with awesome Mexican muralist Jorge Gonzales Camanera. Robert Lucero, Roberto Reyes and I answered the call, and we were soon seeing slides of the most inspiring, incredible, mind-numbing art! During that time, Robert Lucero and I were commissioned by NCHO to create a series of medically themed paintings. His creations were based on indigenous themes and were a joy to behold.

Roberto Reyes secured a studio at Seventh and Santa Fe in 1978, and IAM Studios was born there with Roberto Reyes, Freddy Sanchez, Roberto Lucero and Al Sanchez. We inspired, assisted and supported each other, creating exhibits for the likes of the U.S. Postal Service, NCHO, the National Oceanic and Atmospheric Agency in Boulder, the Pueblo Fine Arts Center and numerous others. Roberto Lucero went on to do a mural for the University of Colorado and the UMC Building, and we saw his work in the fall when he became a groundskeeper at Mile High Stadium. He always painted big! The Broncos!

That year, I heard of a new artist in town; his name was Stevon Lucero. Could this be the Stevon Lucero from Wyoming who had letters printed in the early (1964) Avengers and Strange Tales comic books of which I was such a fan? Yes, it was, and soon I hired Stevon to work on the IAM/City Walls Project. City Walls was put together by Carlos Santistevan through Congresswoman Pat Schroeder’s office in conjunction with the Colorado Paint Company (Ken Walls), IAM Studios and the Metro Denver Urban Coalition. Stevon joined Jerry Jaramillo, Freddy Sanchez, Carlos Sandoval and Al Sanchez on the IAM/City Walls crew. 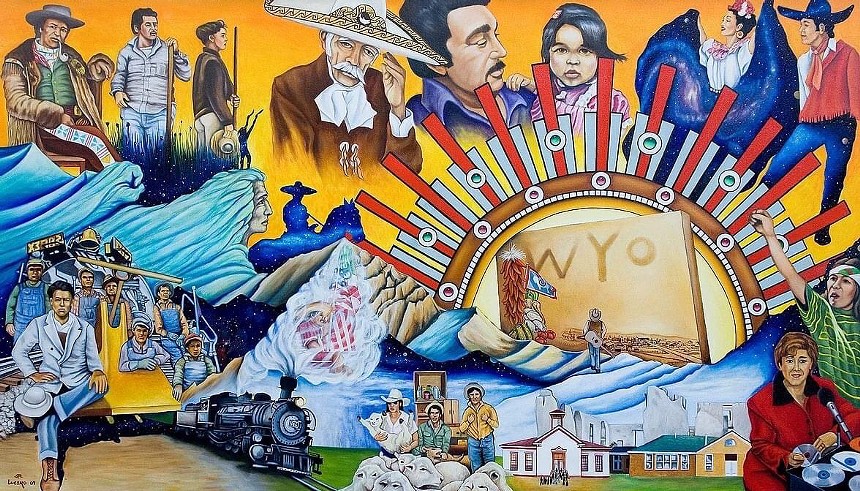 Stevon Lucero came to Denver from Wyoming.
Stevon Lucero
Our first project was with the Leiter Brigade from Chile. Orlando Leiter was the Chilean ambassador to the United States who was assassinated in downtown Washington, D.C., by a car bomb planted by the Chilean secret police; his children were painting murals across the U.S. in memory of their father. Freddy Sanchez acquired a wall at 13th and Santa Fe at Zick's Market; it seemed like almost every artist in Denver showed up to throw paint with us. “Liberty” was seen by literally thousands of people every day as a gateway to downtown Denver.

We followed with “Earthrise” at the North Lincoln Housing Projects; “Balance,” a mural three stories tall on a five-story building in the middle of downtown Denver at 16th and Wazee; and the three murals at La Familia Recreation Center, “Athletics 1 and 2” and “La Familia Cosmica.” The Mexican ambassador saw “Balance” and was very impressed. Soon my crew — Jerry Jaramillo, Stevon Lucero and Carlos Sandoval, all accomplished artists — were in Mexico. They came through in a big way, with a spectacular mural that graces the library in Zijautanejo.

The National Endowment for the Arts took notice of what was happening in Denver and began to fund us. We received money for City Walls II and IAM, were joined by Juan and Danny Salazar's Chispa Productions (which had made "Mestizo Majic," a short film with City Walls as a background), Enrique Montoya’s Dance Group and other artistas to create the Chicano Humanities and Arts Council.
Stevon Lucero became the “face” of CHAC when he opened the CHAC studio on Seventh and Santa Fe, across the street from the old IAM Studios. He loved talking with everyone. 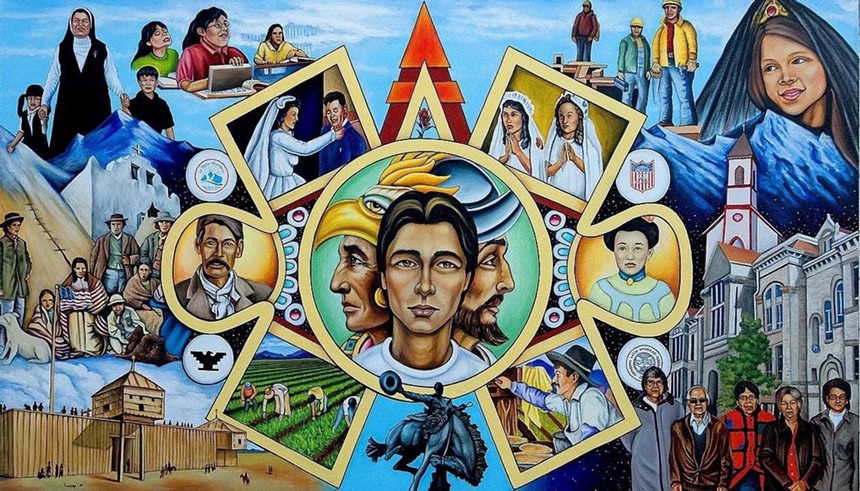 Stevon Lucero
In 1991, I was selected to do a mural for the U.S. Postal Service’s new building at 53rd and Quebec. Stevon was commissioned to do the market square for “Aztec” at the Denver Museum of Nature & Science in City Park. I immediately volunteered to assist and photograph this epic undertaking; I was surrounded with Aztec treasures and once again working with Stevon! As the deadline for “Aztec” approached, Stevon pushed himself so hard that he had his first heart attack, and his wife and l finished the temple for him. The great Mexican archaeologist Eduardo Matos Moctezuma expressed his admiration and blessed Stevon’s efforts. After “Aztec,” Stevon's health began to fail him, yet he never stopped painting.

Stevon was especially proud of his mural for his hometown of Laramie. In 2020 Stevon received his last major commission, and he was so happy when he unveiled his brilliant designs for his Meow Wolf Denver project. l was impressed, as always. Stevon built his own exquisite canvases and then took us to another eternity as only a master can.

Stevon had three children — Tana, Paul and Josh — as well as a bunch of grandchildren and, of course, his favorite artist: Arlette, his wife forever. I was so blessed to spend so much time smoking, discussing infinity and our favorite comic-book artist, Jack Kirby, with Stevon.

It was an honor to share careers with Roberto and Stevon, two titans of the art world!! Thanks for the ride, and what a ride it was. “They were Chiles.” Con mucho amor and gratitude!

Westword frequently publishes op-eds and essays on matters of interest to the community on westword.com on the weekend; the opinions in these pieces are those of the authors, not Westword. Have one you'd like to submit? Send it to [email protected], where you can also comment on this commentary.